On Saturday, Russian police clashed with thousands of protesters who took to the streets amid freezing temps across the country, demanding the immediate release of opposition figure and prominent critic of President Vladimir Putin, Alexei Navalny. In Moscow alone, an estimated 15,000 protesters came out to support Navalny’s anti-corruption message until police beat and dragged several demonstrators and detained others. More than 3,000 were taken into custody across 109 cities over the weekend, including Navalny’s wife, Yulia Navalnaya, in Moscow, in the largest expression of dissent in Russia in years.

Putin’s nemesis, Navlany, was arrested on Jan. 17, after he returned to Moscow from Germany where he was recuperating for five months from nerve-agent poisoning. Navalny blames the Kremlin who has denied it. Navalny now faces up to 3 ½ years in prison on alleged fraud and money laundering charges, which Navalny says are politically motivated. Navalny’s widespread support inside Russia and abroad places the Kremlin in a political bind: Keeping him behind bars could lead to an uptick in protests and bad press in the West.

The US State Department has condemned “the use of harsh tactics against protesters and journalists this weekend in cities throughout Russia” and called on Russian authorities to immediately release Navalny and detained protesters. But Russia rebuked the US for encouraging Russian citizens to break the law. Several EU representatives also weighed in on Russia’s crackdown on protesters. EU foreign policy chief Josep Borrell said, “This wave of detention is something that worries us a lot, as well as the detention of Mr. Navalny.” French Foreign Minister Jean-Yves Le Drian expressed concern about Russia’s “authoritarian drift.”

Protests erupted over the weekend in the Netherlands on the second night of a COVID-19 curfew that led to several clashes with the police and over 100 arrests nationwide. The southern city of Eindhoven was hit hardest — protesters there gathered in defiance of the new curfew that goes from 9 p.m. to 4:30 a.m., and they threw fireworks, torched a car and looted supermarkets. The enforced curfew is the first of its kind in the Netherlands since World War II, and violators can face a fine of about $115. A strict lockdown remains in place until Feb. 9 amid fears of new virus variants found in the UK, South Africa and Brazil. The nation is also rolling out its vaccination plan.

And in Mexico, President Andrés Manuel López Obrador, a COVID-19 skeptic, has tested positive for the coronavirus as the country registers its highest death and infection rates to date. Obrador has mild symptoms and is isolating at home, according to José Luis Alomía Zegarra, Mexico’s director of epidemiology. Since the pandemic began, Mexico has suffered 150,000 deaths and more than 7.1 million infections. The country now hopes to become the first Latin American country to vaccinate teachers as a group, starting with the state of Campeche, so that they can reopen school as soon as possible. 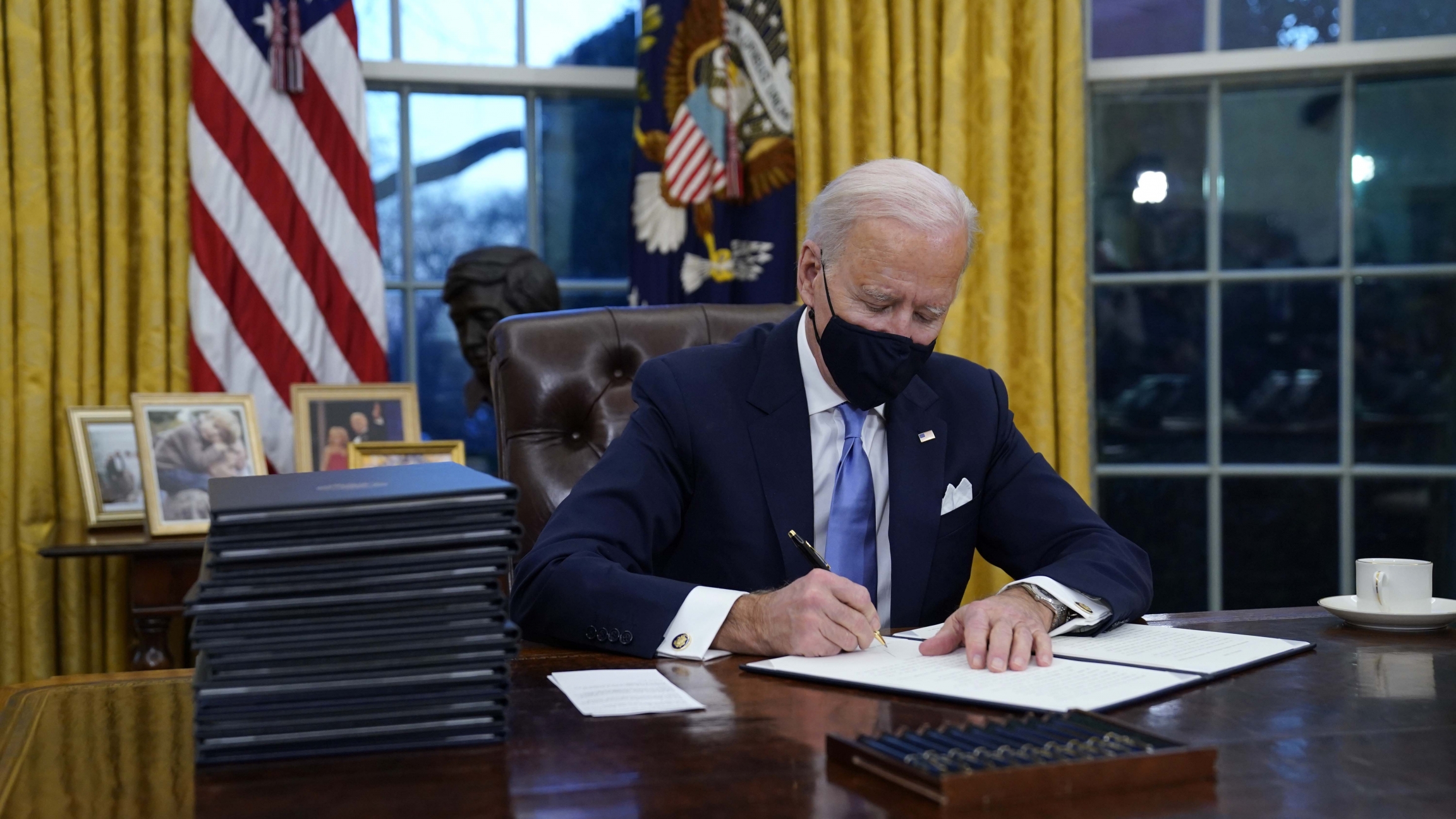 President Joe Biden signs his first executive order in the Oval Office of the White House on Jan. 20, 2021, in Washington, DC.

To understand how President Joe Biden's move to cancel the Keystone XL Pipeline might affect the US-Canada relationship, The World's host Carol Hills spoke to Kathryn Harrison, a political scientist and environmental policy expert at The University of British Columbia in Vancouver.

"The interesting question right now is to what degree Trudeau will end up owning the failure, the rejection of the Keystone XL Pipeline, even as he may get credit for some of his climate policies, or whether, in fact, this will be a wake-up call for Canada's oil industry that perhaps as the rest of the world takes action on climate change, markets for our very carbon-intensive oil will evaporate fairly quickly." 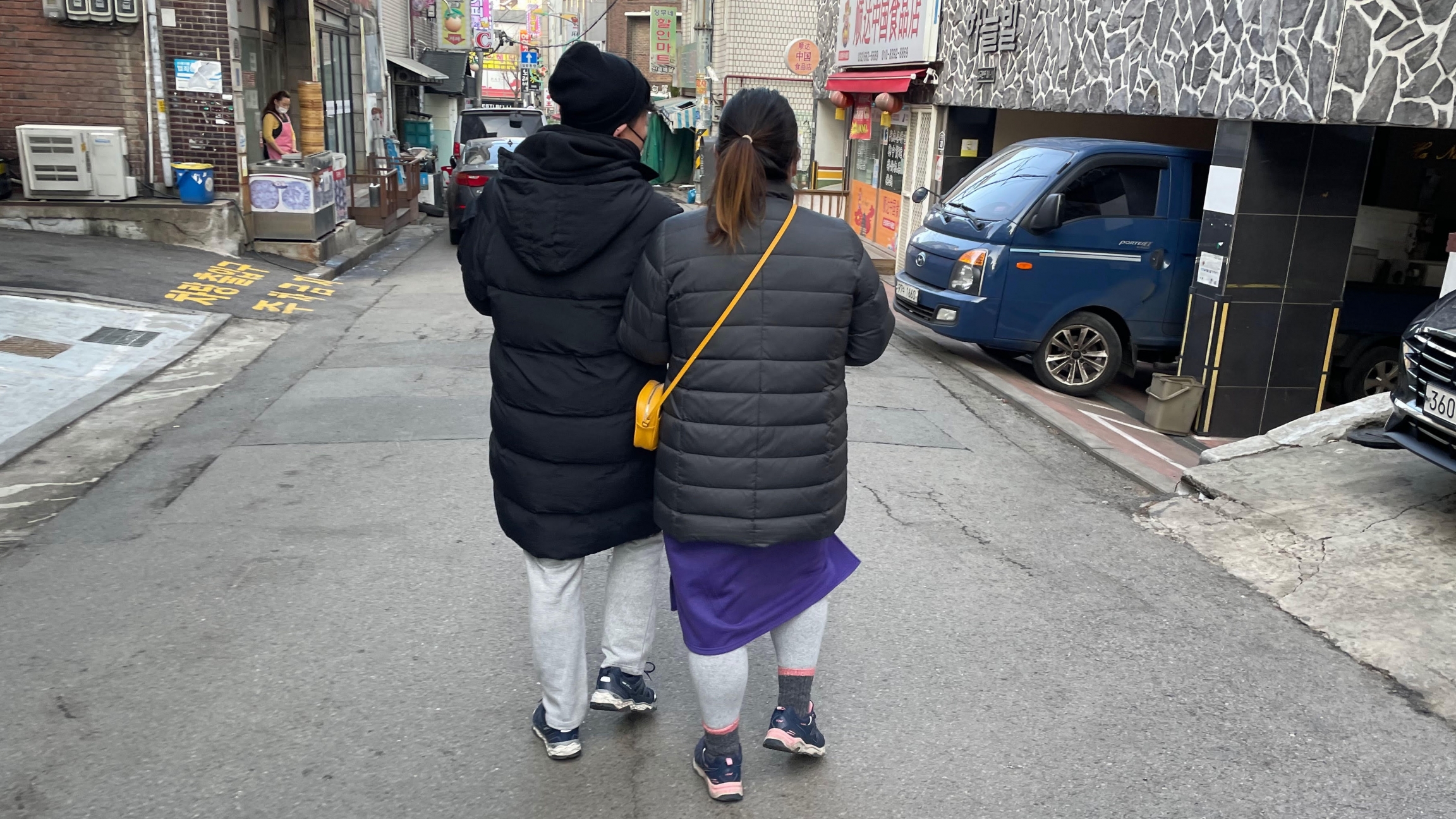 South Korea wants more couples to have babies — but not all families are equal. Same-sex marriage is banned, and there are no laws that protect the LGBTQ community from discrimination. Single mothers also face stigma.

Schools disrupted amid the pandemic 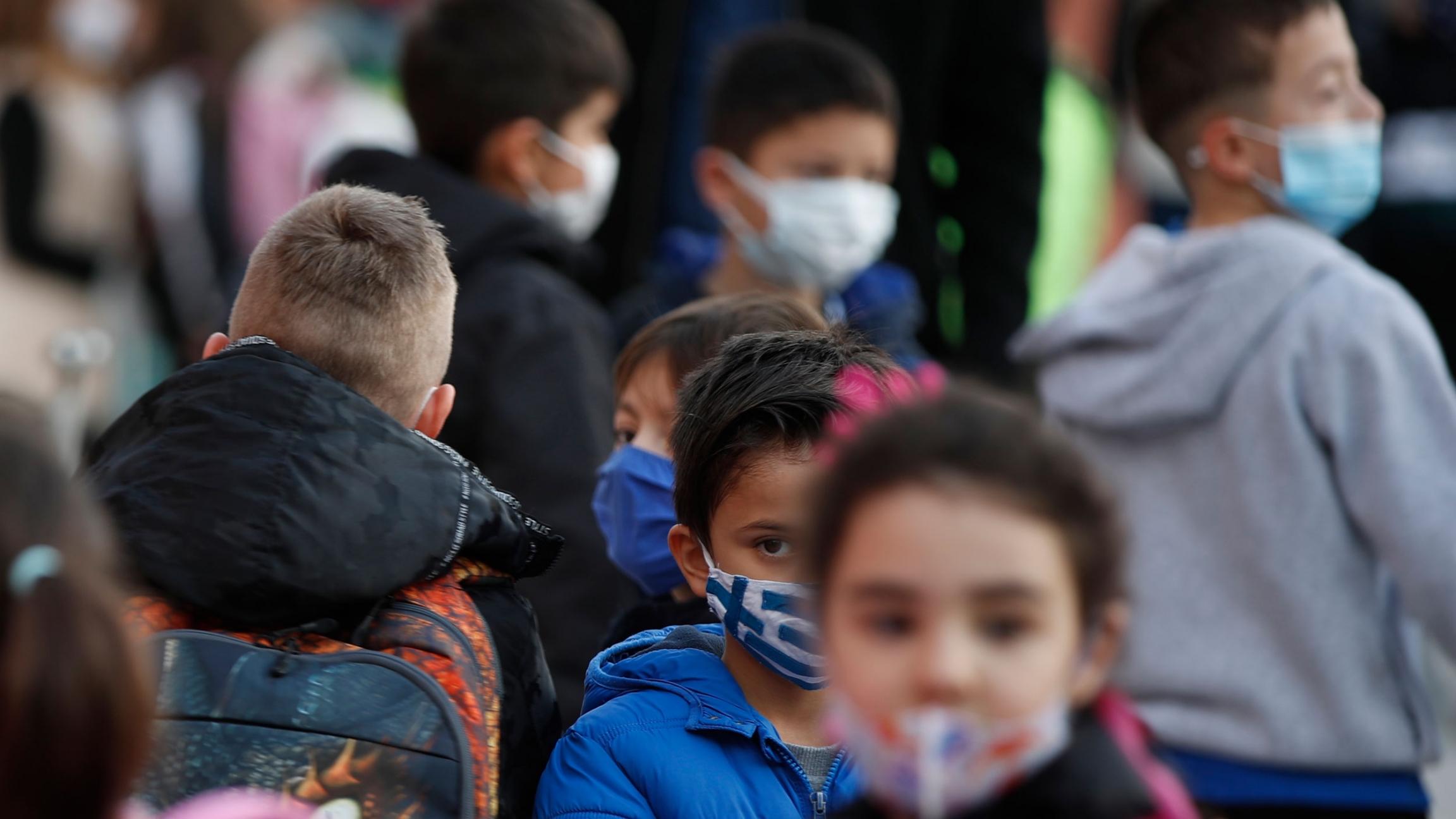 A young student wearing a face mask with the Greek flag, waits to enter his classroom at a primary school in Athens. Primary schools and kindergartens in Greece reopened have as the country has extended a two-month lockdown to curb the spread of the coronavirus, Jan. 11, 2021.

The coronavirus pandemic has forced school systems around the world to piece together patchworks of in-person, remote and hybrid learning programs. What’s the latest science on children and COVID-19?

As part of The World's regular series of conversations on the pandemic with Harvard's T.H. Chan School of Public Health and as a special in our podcast feed, reporter Elana Gordon moderated a discussion with Harvard education expert Meira Levinson and epidemiologist Marc Lipsitch.

A fresh, new musical groove out of New York City (🎧) starts with a saxophone sample from the 1970’s Long Island group, Lafayette Afro Rock Band and their song "Darkest Light." It’s been sampled for many years and now Texas-based DJ and producer El Dusty, along with some of his collaborators, have worked the "Darkest Light" sample into a cumbia track called "Sax Riddim." It takes a global village — and some time — to brew a sound like this. 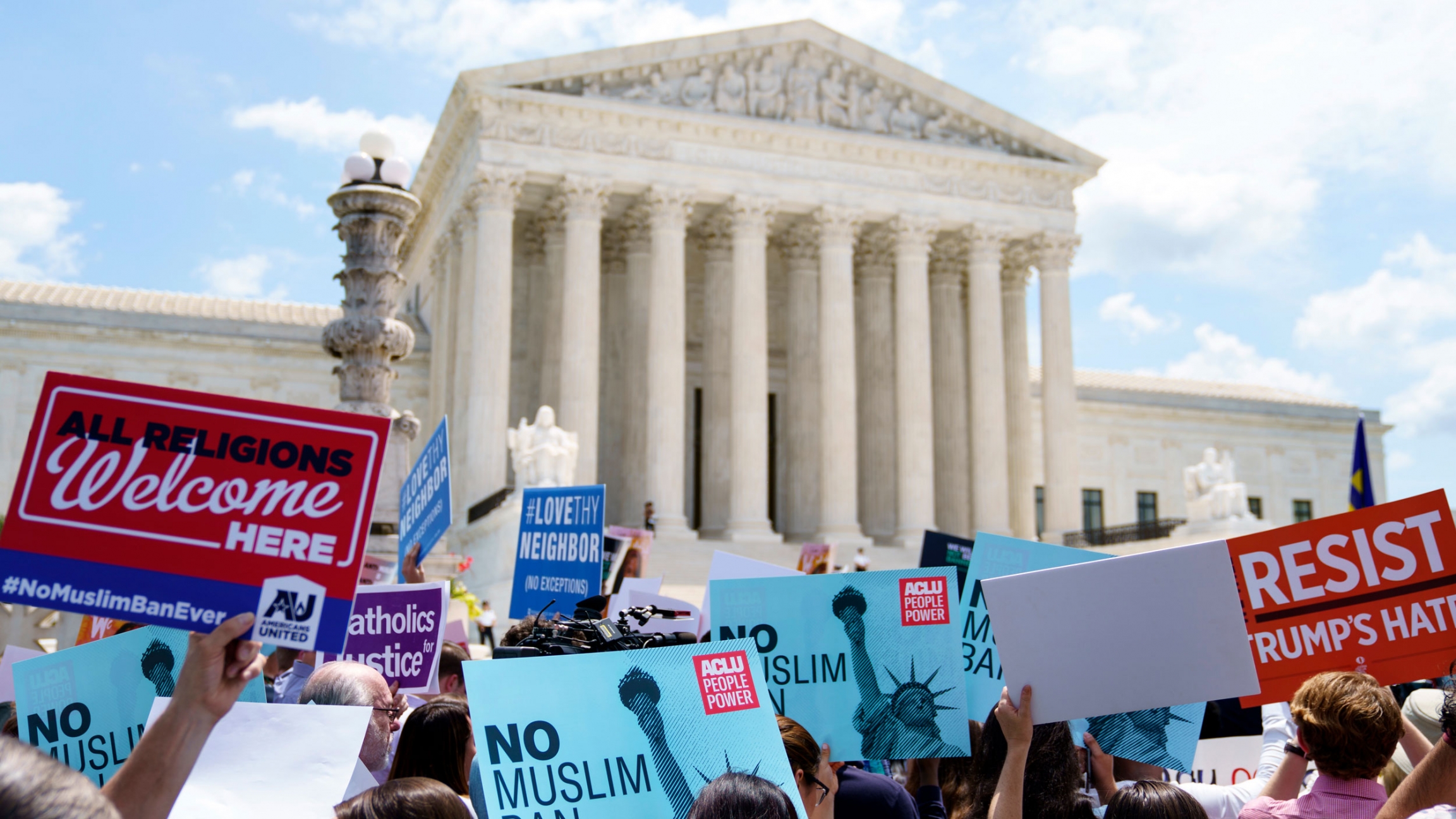 Protesters hold up signs and call out against the US Supreme Court ruling upholding former President Donald Trump's travel ban in Washington, June 2018.

The Biden administration announced plans to overturn former President Donald Trump’s travel ban on refugees and travelers from many Muslim-majority countries. And, as President Biden and his foreign policy team get to work, one country presents some big challenges: China. Also, the rumor mill heated up on Thursday after a London newspaper reported the Summer Olympics would be called off. But officials with the International Olympic Committee say that the games are on schedule.