One of the many horrifying images from the Jan. 6 rampage on the US Capitol shows a long-haired, long-bearded man wearing a black “Camp Auschwitz” T-shirt emblazoned with a skull and crossbones, and under it the phrase “work brings freedom” — an English translation of the Auschwitz concentration camp motto: “Arbeit macht frei.”

These and related images, captured on television and retweeted on social media, demonstrate that some of those who traveled to Washington to support President Donald Trump were engaged in much more than just a doomed effort to maintain their hero in power.

As their writings make clear to me as a scholar of American anti-Semitism, some among them also hoped to trigger what is known as the “Great Revolution,” based on a fictionalized account of a government takeover and race war, that, in its most extreme form, would exterminate Jews.

Calls to exterminate Jews are common in far-right and white nationalist circles. For example, the conspiracy theorists of QAnon, who hold “that the world is run by a cabal of Satan-worshiping pedophiles who are plotting against Mr. Trump,” traffic in it regularly.

The anonymous “Q” — the group’s purported head who communicates in riddles and leaves clues on message boards — once approvingly retweeted the anti-Semitic image of a knife-wielding Jew wearing a Star of David necklace who stands knee-deep in the blood of Russians, Poles, Hungarians and Ukrainians and asks with feigned innocence, “Why do they persecute me so?”

Images of long-nosed Jews dripping with the blood of non-Jews whom they are falsely accused of murdering have a long and tragic history. Repeatedly, they have served as triggers for anti-Semitic violence.

More commonly, including in recent days, QAnon has targeted Jewish billionaire philanthropist and investor George Soros, whom it portrays as the primary figure shaping and controlling world events. A century ago, the Rothschilds, a family of Jewish bankers, was depicted in much the same way. 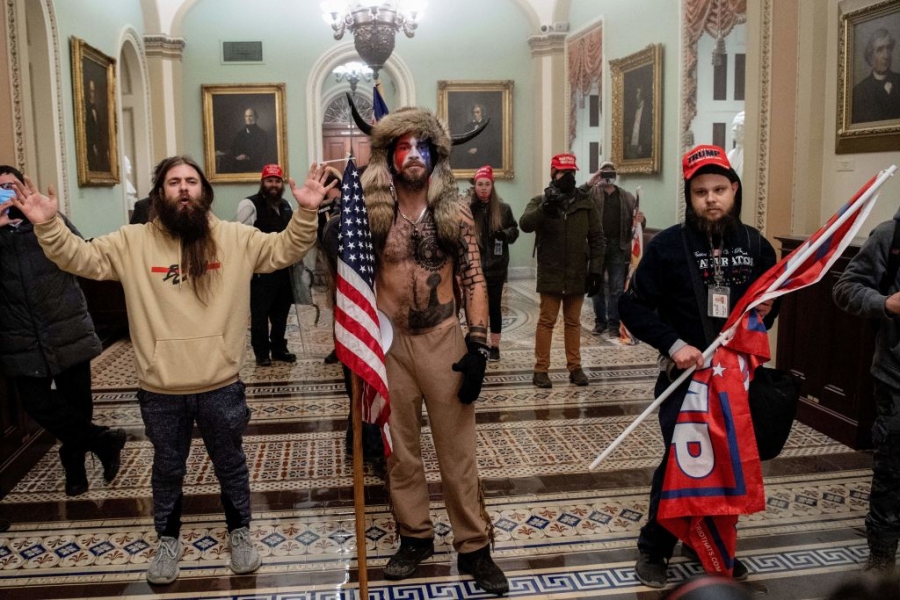 Among the crowd that stormed the US Capitol on Jan. 6 were QAnon supporters.

QAnon members also mark Jews with triple parentheses, a covert means of outing those whom they consider usurpers and outsiders, not true members of the white race.

Another website popular in white nationalist circles displayed photographs of Jewish women and men, downloaded from university websites, so as to help readers distinguish Jews from the “Aryan Master Race.” “Europeans are the children of God,” it proclaims. “(((They)))” — denominating Jews as other without even mentioning them — “are the children of Satan.”

The website justifies rabid anti-Semitism by linking Jews to the forces supposedly seeking to undermine racial hierarchies. “White genocide is (((their))) plan,” it declares, again marking Jews with triple parentheses, “counter-(((extermination))) is our response.”

Members of the Proud Boys, another group that sent members to Washington, likewise traffic in anti-Semitism. One of the group’s leaders, Kyle Chapman, recently promised to “confront the Zionist criminals who wish to destroy our civilization.” The West, he explained “was built by the White Race alone and we owe nothing to any other race.”

Chapman, like many of his peers, uses the term “white genocide” as a shorthand way of expressing the fear that the members of the white population of the United States, like themselves, will soon be overwhelmed by people of color. The popular 14-word white supremacist slogan, visible on signs outside the Capitol on Wednesday, reads, “We must secure the existence of our people and a future for white children.”

Composed by David Lane, one of the conspirators behind the 1984 assassination of Jewish radio host Alan Berg, this slogan originally formed part of a larger document entitled “The White Genocide Manifesto.” Its 14 planks insist that Jews are not white and actually endanger white civilization. “All Western nations are ruled by a Zionist conspiracy to mix, overrun and exterminate the White race,” the manifesto’s seventh plank reads.

While influenced by the infamous anti-Semitic forgery known as The Protocols of the Elders of Zion, the document goes further, blaming members of what it euphemistically calls the “Zionist occupation governments of America” for homosexuality and abortion as well.

QAnon followers, the Proud Boys and the other far-right and alt-right groups that converged on Washington imagined that they were living out the great fantasy that underlies what many consider to be the bible of the white nationalism movement, a 1978 dystopian novel, “The Turner Diaries,” by William Luther Pierce.

The novel depicts the violent overthrow of the government of the United States, nuclear conflagration, race war and the ultimate extermination of nonwhites and “undesirable racial elements among the remaining White population.”

Symbolism outside the Capitol

As opinion writer Seyward Darby pointed out in The New York Times, the gallows erected in front of the Capitol recalls the novel’s depiction of “the day of the rope,” when so-called betrayers of their race were lynched. Unmentioned in The New York Times article is that the novel subsequently depicts “a war to the death with the Jew.”

The book warns Jews that their “day is coming.” When it does, at the novel’s conclusion, mass lynchings and a takeover of Washington set off a worldwide conflagration, and, within a few days “the throat of the last Jewish survivor in the last kibbutz and in the last, smoking ruin in Tel Aviv had been cut.”

“The Turner Diaries"’ denouement coupled with the anti-Semitic images from the Capitol on Wednesday serve as timely reminders of the precarious place Jews occupy in different corners of the United States. Even as some celebrate how Jews have become white and privileged, others dream of Jews’ ultimate extermination.

This article has been corrected to remove an unsubstantiated reference to a T-shirt with an anti-Semitic acronym.