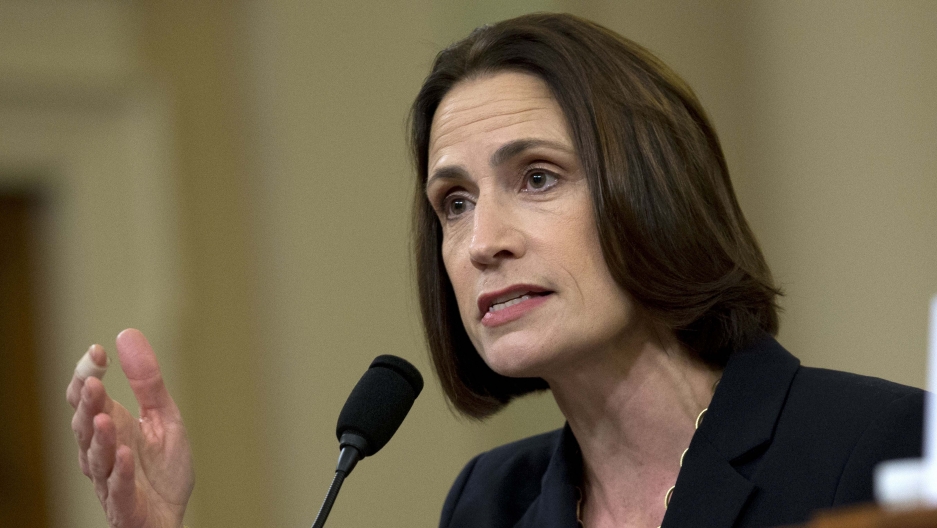 The US House of Representatives said Monday it plans to charge President Donald Trump with incitement of insurrection this week.

The House is expected to move quickly to vote midweek on the impeachment of the president over his role in the violent breach of the US Capitol by a mob of his supporters on Jan. 6. It will be the second impeachment proceeding against Trump in less than a year.

Fiona Hill was a key witness in the previous impeachment proceedings. Hill was Trump’s top Russia adviser from 2017 to 2019 and also served on the National Security Council. She told The World's host Marco Werman that the idea to storm the Capitol didn't come out of the blue.

Marco Werman: Looking at the events of last week, what do you think President Trump was trying to do?

Fiona Hill: A lot of people are saying, "Oh, it couldn't possibly have been a coup. It didn't succeed, the military wasn't out on the streets, the president wasn't using his formal powers.” Or “It just didn't happen. You know, this was just a mob and an insurrection." But it's important to lock down all of these elements because — just because it didn't have a high likelihood of succeeding in a classic coup fashion doesn't mean it wasn't an attempt and this wasn't real. So, as I'm saying, we're not out of the woods yet.

One could imagine there could be factions of people within the military or veterans, which we've already seen, not just all of the right-wing and other militias that have been taking this stand in support of the president. That's when it gets incredibly dangerous. We've seen a slow-rolling attempt. It wasn't just a one-off on Jan. 6th. It's been building up for quite some time. And we've got a lot of concerns about what might happen outside of the presidency once we get past the inauguration. And then there's also a lot of worries about the threats, possible threats to the inauguration itself.

You've used the phrase "soft civil war" to describe the US right now. Can you explain what you mean by that?

Well, I mean, we're obviously not in a full-blown conflict here, but we've seen plenty of violence on our streets. So, there were plenty of people in Capitol Hill who were wearing weapons and body armor. Obviously on the internet. There's been a lot of instigation to violence and people threatening violence, people threatening to kill the vice president, George Soros, all kinds of different boogeymen and women. And, you know, this has all the elements of a civil conflict. If we were looking at another country, we would be greatly disturbed by this.

And so, what I'm worried about moving forward is that this hardens. Because if you have 74 million people who have voted for President Trump — now, of course, not all of these are active supporters of the president or certainly not actively engaged in considering taking some kind of violent action in his support. But even if a relatively small percentage of them are and there's been a lot of polling, that's actually quite disturbing in terms of the scope and scale of the number of people who believe, first of all, that the election was stolen from him and others who said that they are prepared to take action — then we're in really big trouble. And so, it's very important how we address this. I mean, otherwise, again, it is going to be a civil war that spills out even further onto the streets.

So, this is a long-term concern. I'm wondering about the next nine days before the inauguration. You're a historian with a deep knowledge of Eastern Europe and Russia. And based on what you know about authoritarian regimes, what worries you most in the next nine days of the Trump presidency?

Well, it worries me that our democratic institutions don't take action here. We also have to whatever action we take — I know there's a whole load of discussions right now going on about should he resign or be forced to resign, should the 25th Amendment be enacted, should there be another impeachment? Whatever we do, it has to be done very clearly, very plainly with plenty of discussion and also legally by the book. Because we have to be able to defend these actions after the fact because that would be part of the mechanisms for reestablishing democratic norms.

However, if we handle this correctly and we show that we can correct our mistakes, which the United States has done in the past, I think we can be an example to others of a democratic success. We can fix this, but only if we are very systematic, methodical about it, and very transparent.

Related: 'Even if a coup fails, it still damages your government': What the US can learn from Sri Lanka

With the US national security apparatus focused on this crisis, how vulnerable is the US to adversaries? And do you have reason to believe foreign infiltrators were in the mix at the Capitol on Wednesday?

There's an incredible risk. I mean, I haven't got any personal reason to believe this, and I haven't seen any reports. But there's an incredible risk. Because anytime you have something like this, especially as it was telegraphed for weeks in advance — I mean I've even got on my answering machine at home one of these robocalls asking me to go down to the rally on Jan. 6th. I'm sure lots of people got it. I mean, I've talked to a few of the people who came home and found this on their answering machines. People were being asked to go down to the rally.

And so, if you're a thoughtful, premeditated foreign adversary, you might well think of infiltrating the crowd and sending people down there because it certainly wasn't being scoped out and observed in the way that one would hope. I mean, there wasn't any background checks with people who are coming in on the buses. So, who knows who was also using the opportunity to get into the Capitol? And certainly, there's now been a great deal of concern about the stealing of laptops and other information from inside the building, and it's not really kind of clear what was taken out of the building. But I'm hoping that they're doing more thorough sweeps as well to see if any of the things could have been planted there. But, yes, it's an enormous concern and we should always be concerned at these times of great vulnerability because we've exposed ourselves.

This interivew has been lightly edited and condensed for clarity.