A violent mob loyal to President Donald Trump stormed the US Capitol on Wednesday and forced lawmakers into hiding. It was a stunning attempt to overturn America's presidential election, undercut the nation's democracy and keep Democrat and President-elect Joe Biden from replacing Trump in the White House.

The nation's elected representatives scrambled to crouch under desks and don gas masks, while police futilely tried to barricade the building, one of the most jarring scenes ever to unfold in a seat of American political power. A woman was shot and killed inside the Capitol, and Washington's mayor instituted an evening curfew in an attempt to contain the violence. 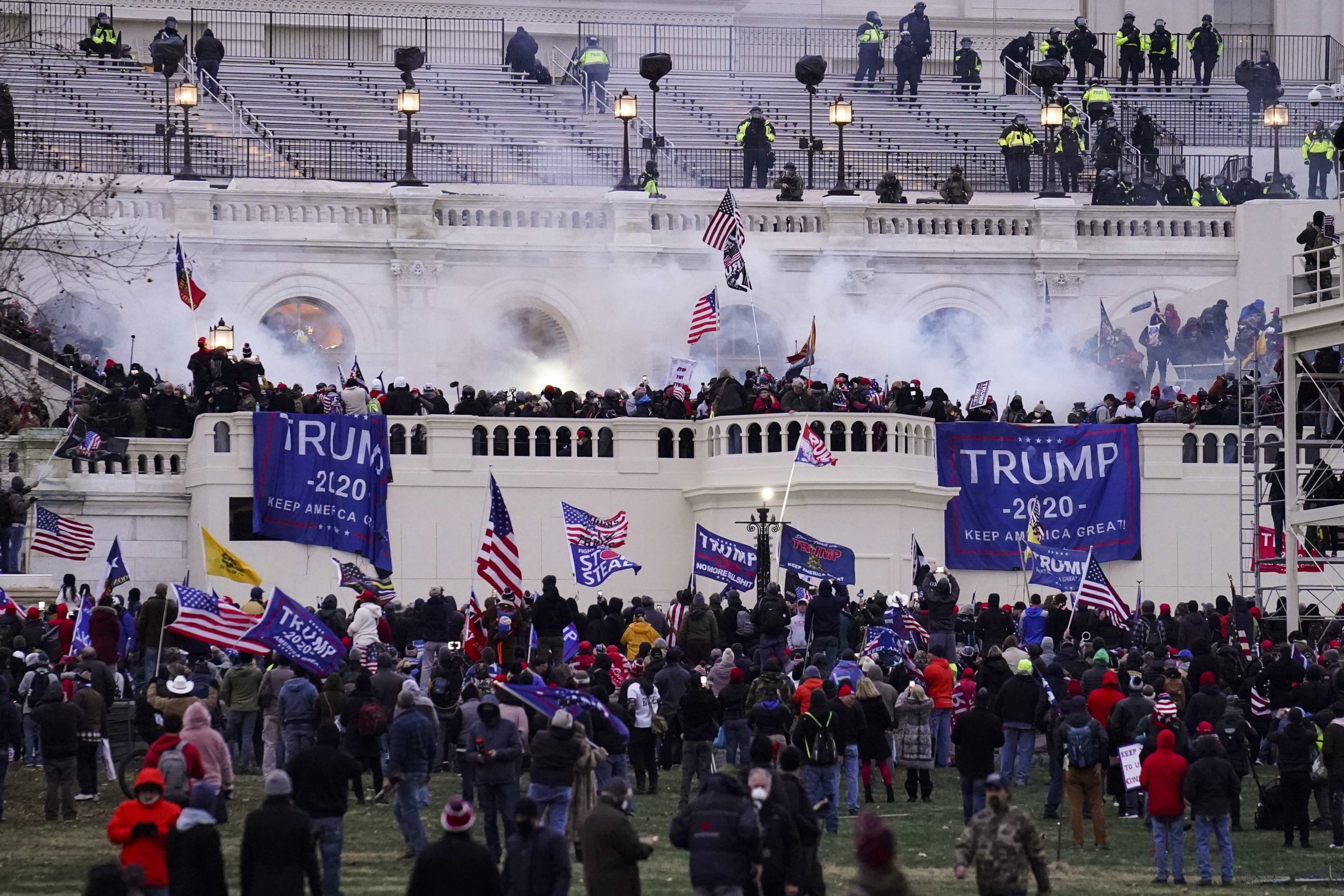 The rioters were egged on by Trump, who has spent weeks falsely attacking the integrity of the election and had urged his supporters to descend on Washington to protest Congress' formal approval of Biden's victory. Some Republican lawmakers were in the midst of raising objections to the results on his behalf when the proceedings were abruptly halted by the mob. 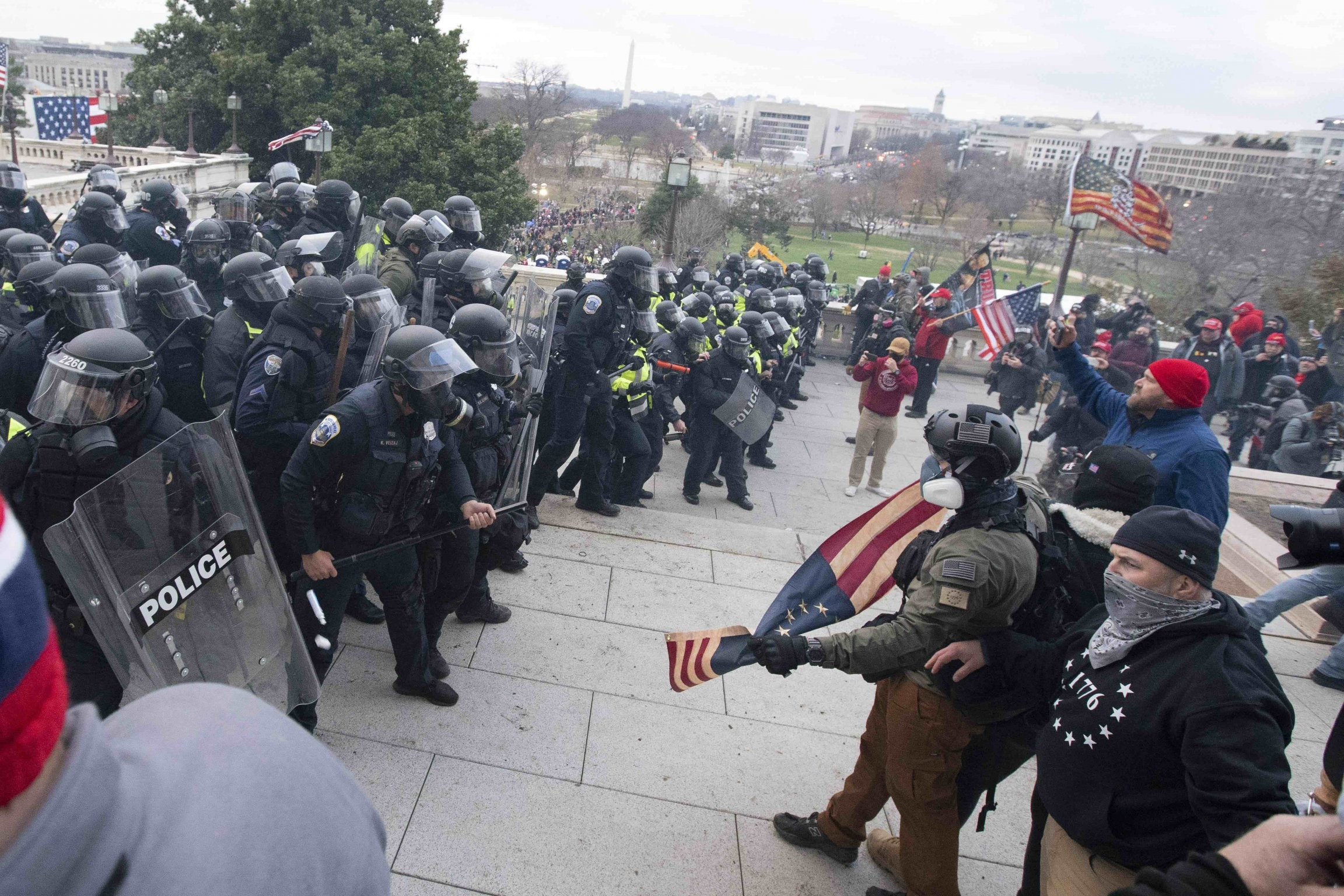 US Capitol Police push back rioters who were trying to enter the US Capitol on Wednesday, Jan. 6, 2021, in Washington, DC.

Together, the protests and the GOP election objections amounted to an almost unthinkable challenge to American democracy and exposed the depths of the divisions that have coursed through the country during Trump's four years in office. Though the efforts to block Biden from being sworn in on Jan. 20 were sure to fail, the support Trump has received for his efforts to overturn the election results have badly strained the nation's democratic guardrails. 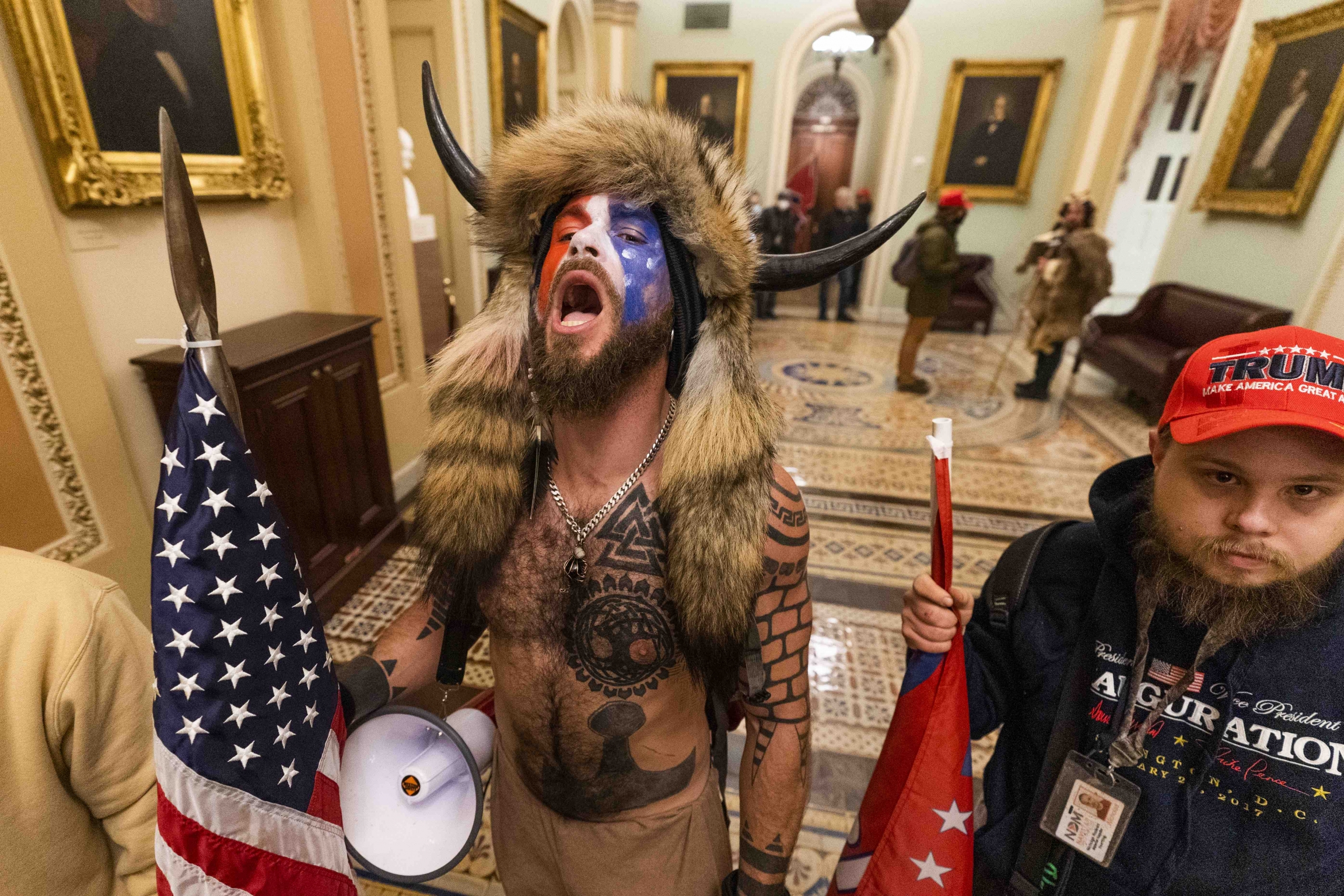 A supporter of President Donald Trump chants outside the Senate chamber inside the Capitol, Wednesday, Jan. 6, 2021, in Washington, DC.

Congress reconvened in the evening, with lawmakers decrying the protests that defaced the Capitol and vowing to finish confirming the Electoral College vote for Biden's election, even if it took all night.

The domed Capitol building has for centuries been the scene of protests and occasional violence. But Wednesday's events were particularly astounding both because they unfolded at least initially with the implicit blessing of the president and because of the underlying goal of overturning the results of a free and fair presidential election. 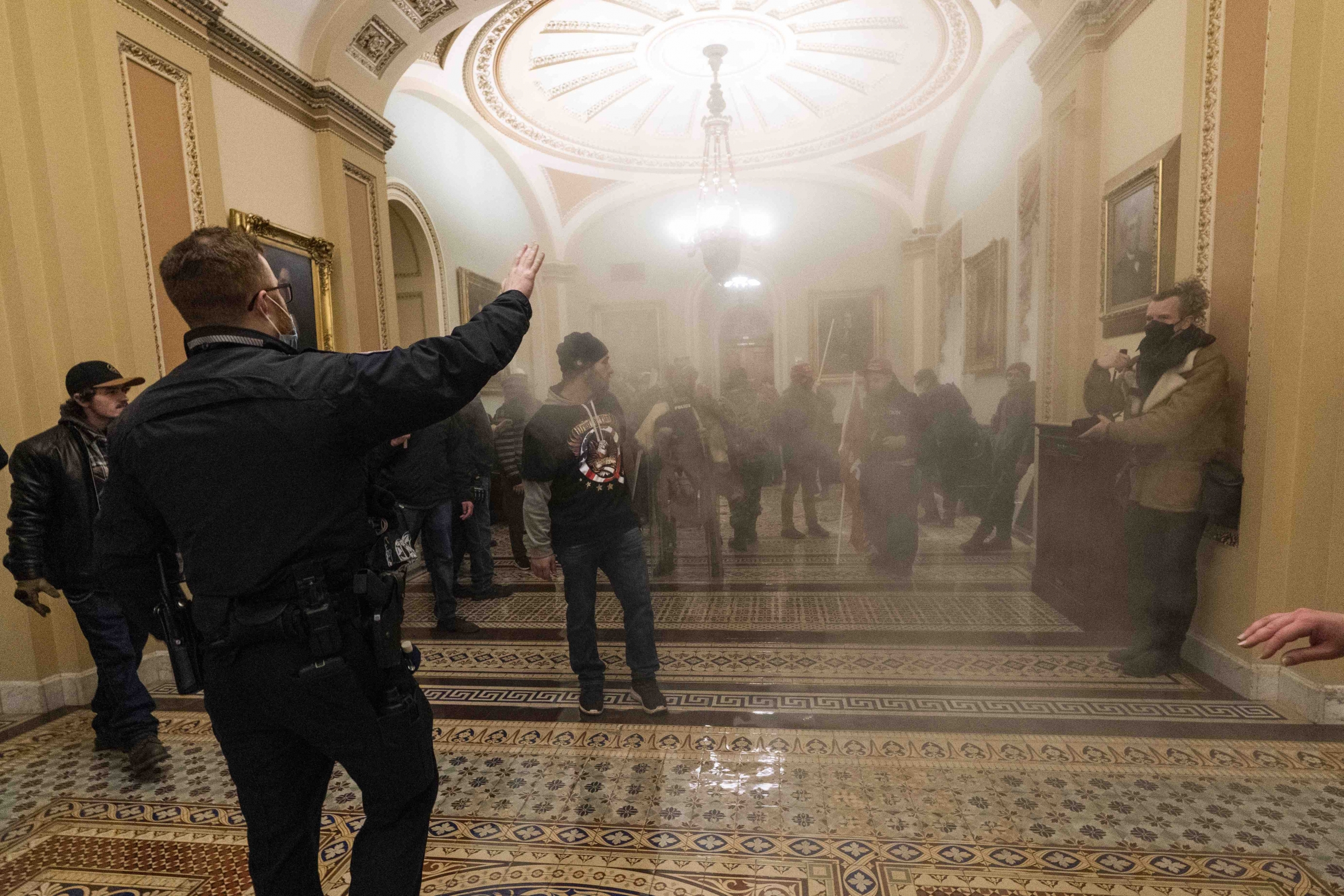 Smoke fills the walkway outside the Senate chamber as supporters of President Donald Trump are confronted by US Capitol Police officers inside the Capitol, Wednesday, Jan. 6, 2021, in Washington, DC.

Tensions were already running high when lawmakers gathered early Wednesday afternoon for the constitutionally mandated counting of the Electoral College results, in which Biden defeated Trump, 306-232. Despite pleas from McConnell, more than 150 GOP lawmakers planned to support objections to some of the results, though lacking evidence of fraud or wrongdoing in the election. 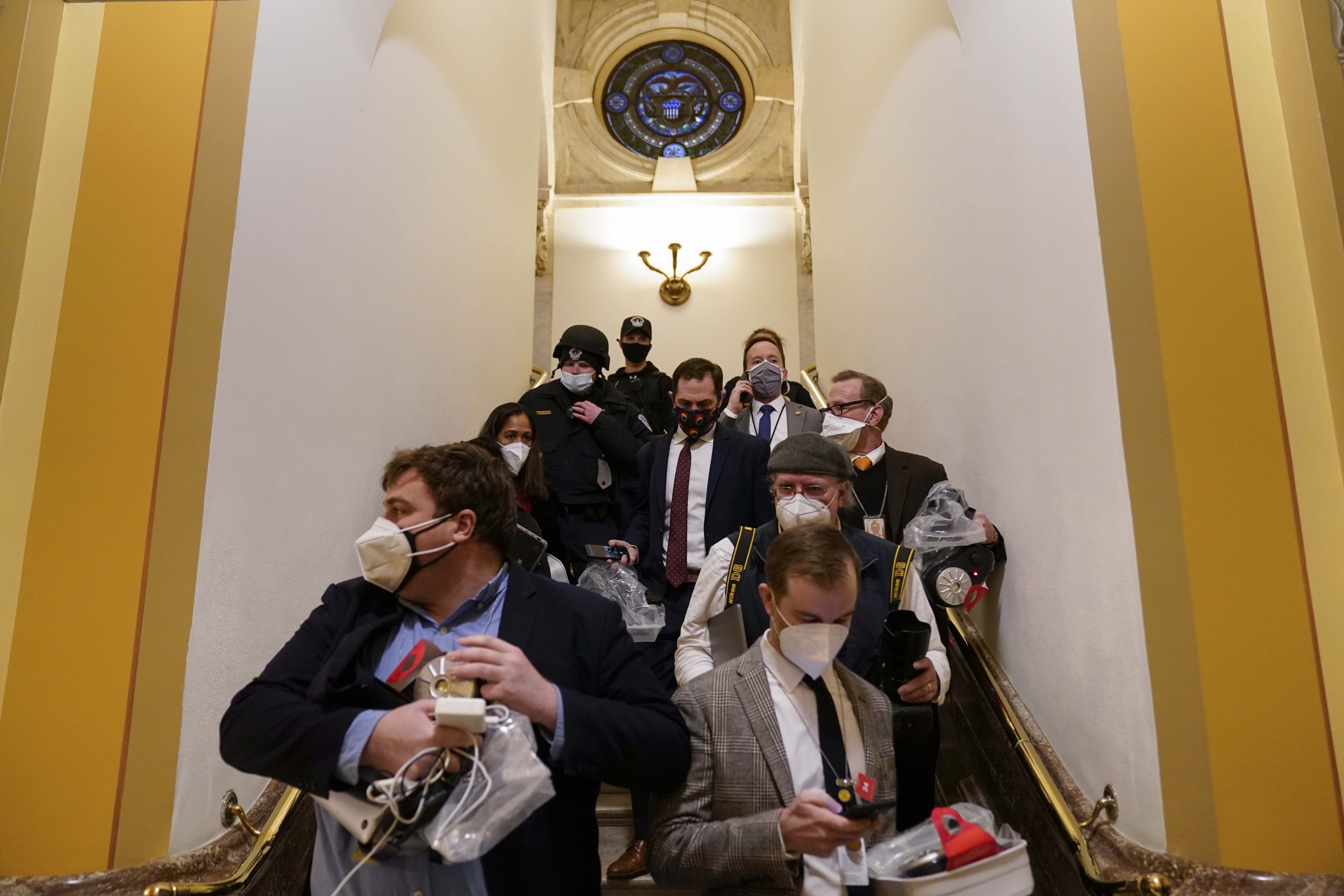 People evacuate from the House chamber as a violent mob of Trump supporters try to break in at the US Capitol on Wednesday, Jan. 6, 2021, in Washington, DC.

In the aftermath, several Republicans announced they would drop their objections to the election, including Sen. Kelly Loeffler, R-Ga., who lost her bid for reelection Tuesday.

Earlier, protesters had fought past police and breached the building, shouting and waving Trump and American flags as they marched through the halls, many without masks during the COVID-19 crisis. Lawmakers were told to duck under their seats for cover and put on gas masks after tear gas was used in the Capitol Rotunda. Some House lawmakers tweeted they were sheltering in place in their offices. 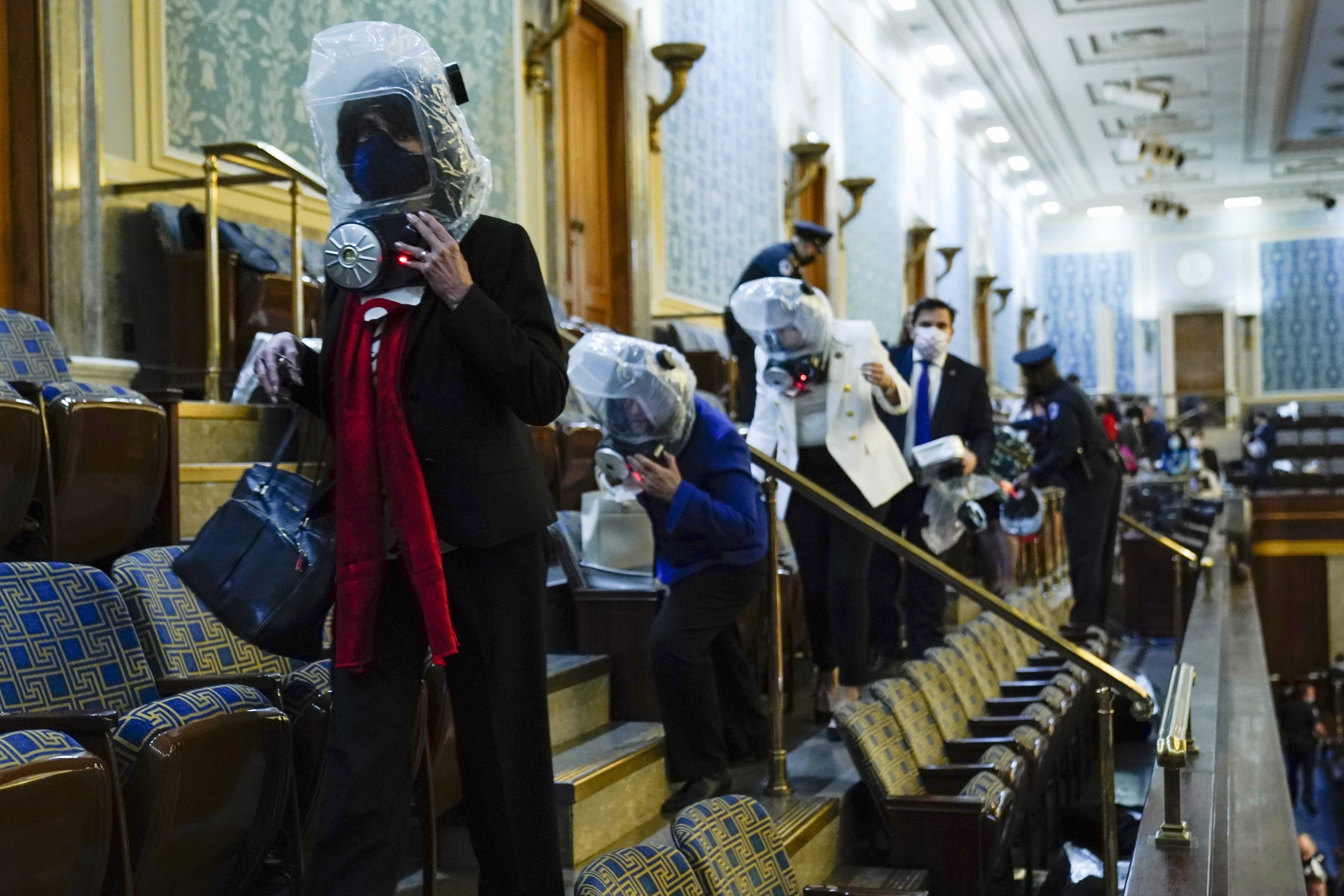 People shelter in the House gallery as a mob of Trump supporters try to break into the House chamber at the US Capitol on Wednesday, Jan. 6, 2021, in Washington, DC.

The woman who was killed was part of a crowd that was breaking down the doors to a barricaded room where armed officers stood on the other side, police said. She was shot in the chest by Capitol Police and taken to a hospital where she was pronounced dead. City police said three other people died from medical emergencies during the long protest on and around the Capitol grounds.

Staff members grabbed boxes of Electoral College votes as the evacuation took place. Otherwise, said Democratic Sen. Jeff Merkley of Oregon, the ballots likely would have been destroyed by the protesters. 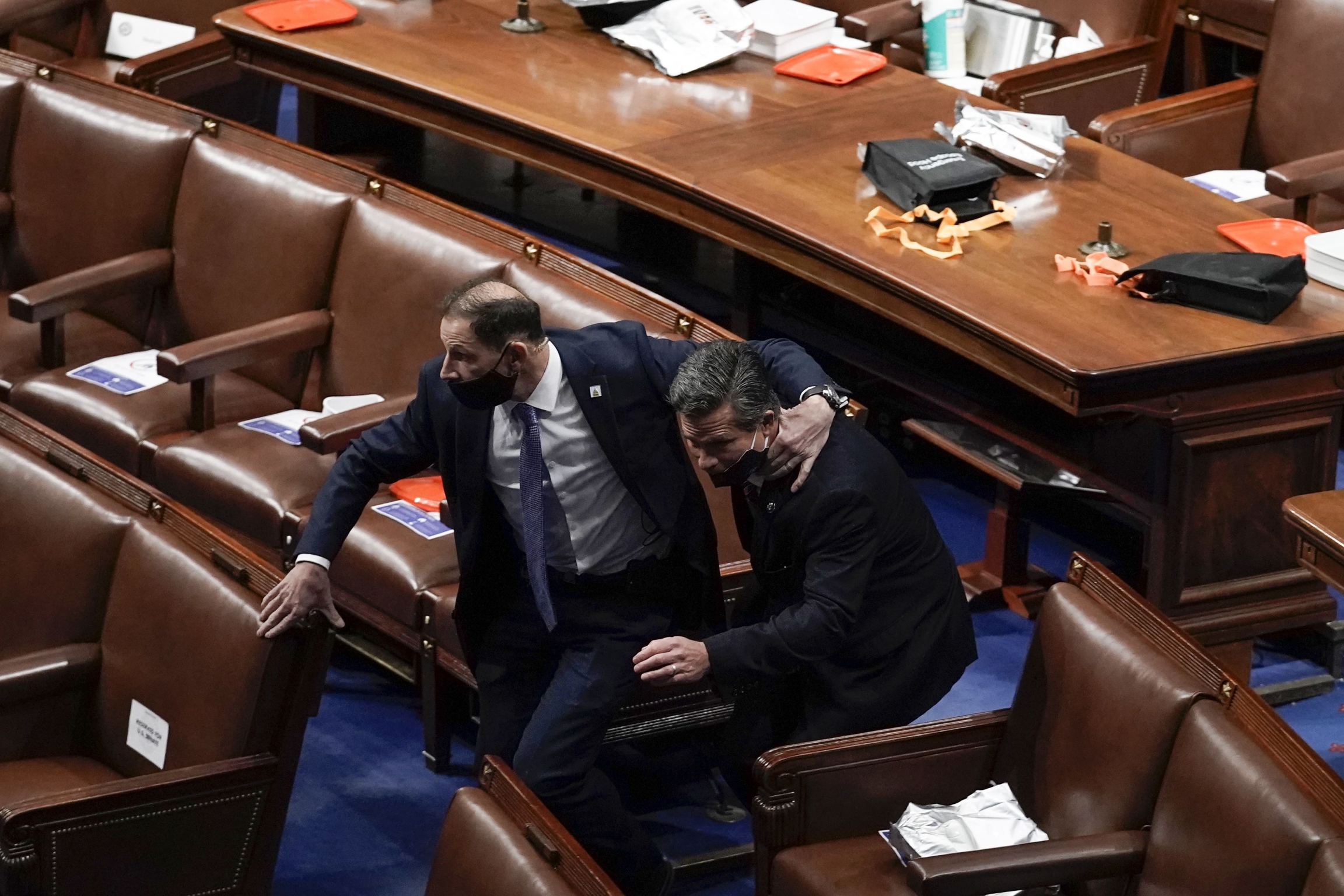 Lawmakers evacuate the floor as a violent mob tries to break into the House Chamber at the US Capitol on Wednesday, Jan. 6, 2021, in Washington.

The mob's storming of Congress prompted outrage, mostly from Democrats but from Republicans as well, as lawmakers accused Trump of fomenting the violence with his relentless falsehoods about election fraud.

Several suggested that Trump be prosecuted for a crime or even removed under the Constitution's 25th Amendment, which seemed unlikely two weeks from when his term expires. 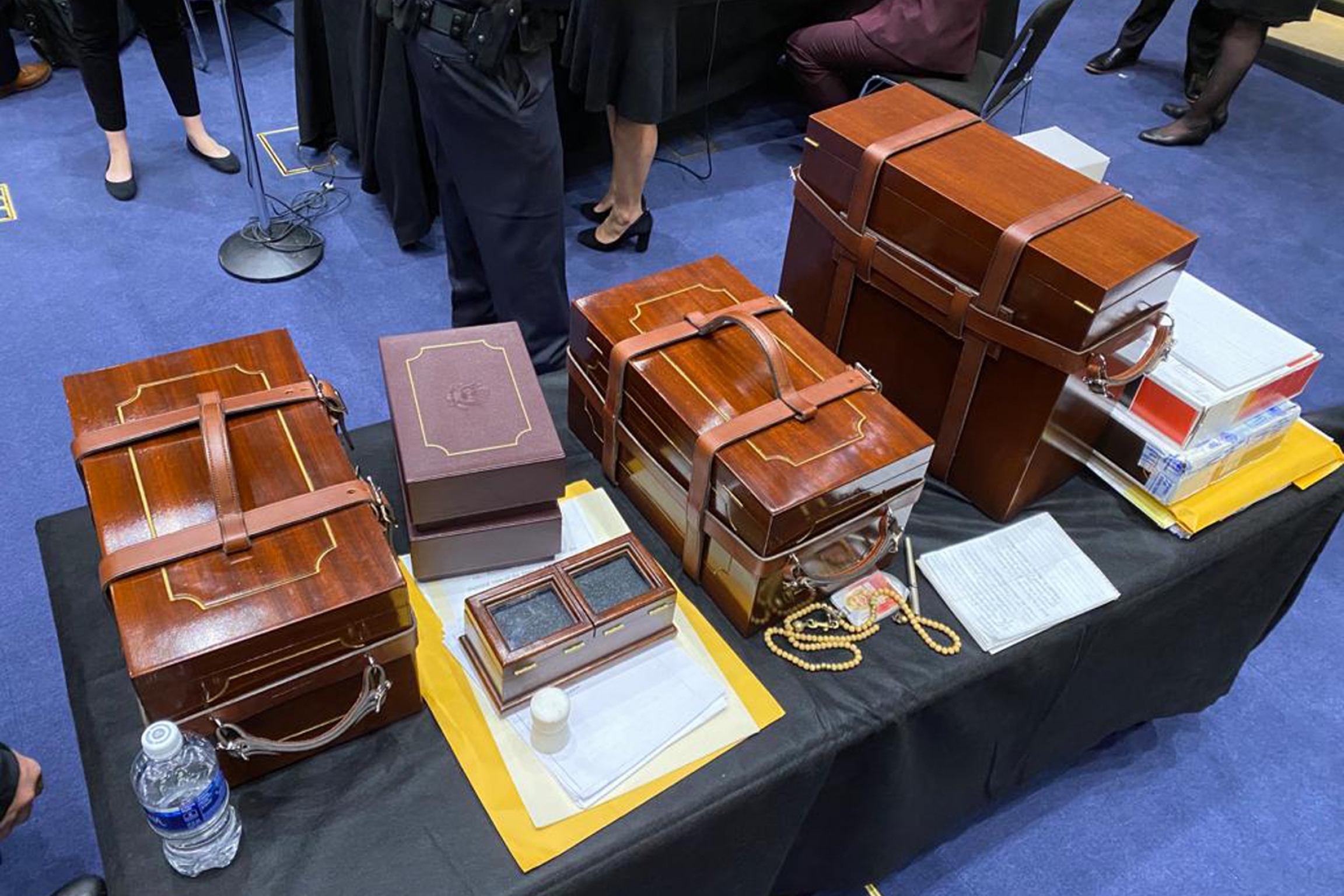 In this photo released by the Office of Democratic US Sen. Jeff Merkley, Electoral College ballots sit on a table after they were rescued from the Senate floor, Wednesday, Jan. 6, 2020, Washington, DC.

Office of US Senator Jeff Merkley via AP

"I think Donald Trump probably should be brought up on treason for something like this," California Rep. Jimmy Gomez told reporters. "This is how a coup is started. And this is how democracy dies."

Nebraska Republican Sen. Ben Sass, who has at times clashed with Trump, issued a statement saying, "Lies have consequences. This violence was the inevitable and ugly outcome of the President's addiction to constantly stoking division." 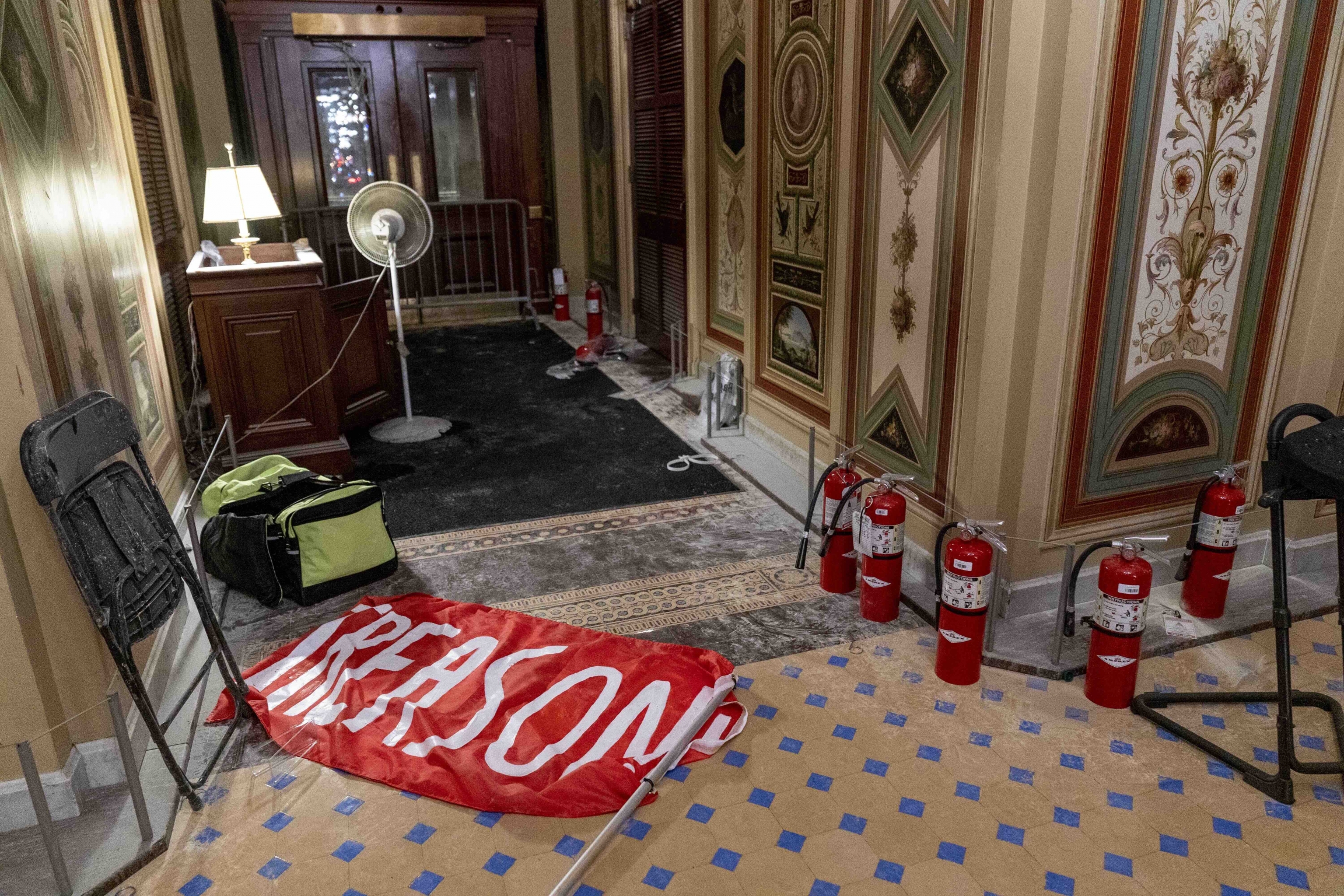 A flag that reads "Treason" is visible on the ground in the early morning hours of Thursday, Jan. 7, 2021, after a violent mob loyal to President Donald Trump stormed the US Capitol in Washington DC.

Despite Trump's repeated claims of voter fraud, election officials and his own former attorney general have said there were no problems on a scale that would change the outcome. All the states have certified their results as fair and accurate, by Republican and Democratic officials alike.

Punctuating their resolve, both the House and Senate soundly rejected an objection to election results from Arizona, which had been raised by Texas Senator Ted Cruz and Rep. Paul Gosar of Arizona and another from Pennsylvania brought by Missouri Sen. Josh Hawley and Pennsylvania's Rep. Scott Perry. Still, most House Republicans supported the objections. Other objections to results from Georgia, Michigan, Nevada and Wisconsin fizzled. 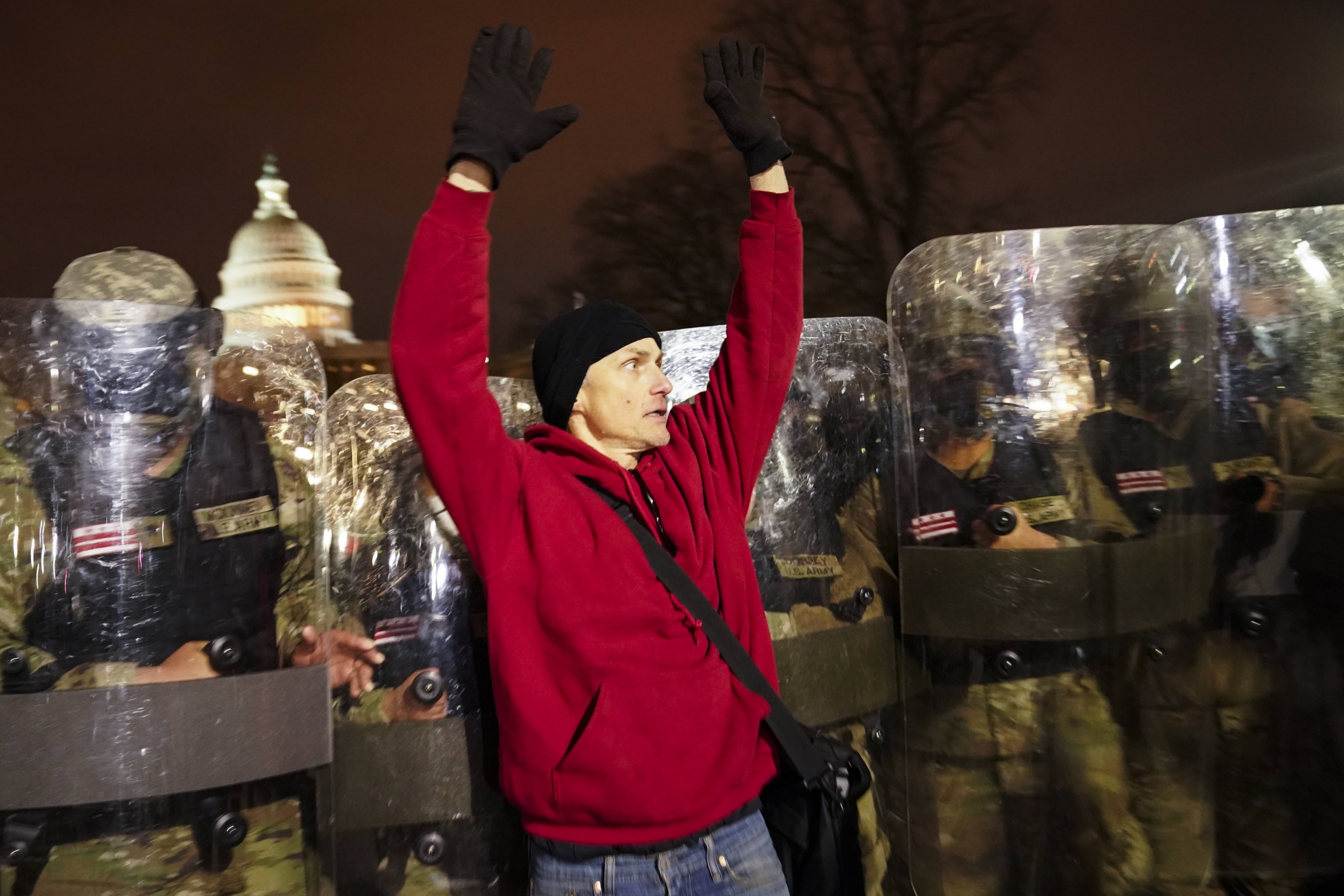 The DC National Guard moves a demonstrator outside the Capitol on Wednesday night, Jan. 6, 2021, after a day of rioting.

The Pentagon said about 1,100 District of Columbia National Guard members were being mobilized to help support law enforcement at the Capitol. More than a dozen people were arrested.

As darkness fell, law enforcement officers worked their way toward the protesters, using percussion grenades to clear the area around the Capitol. Big clouds of tear gas were visible. Police in full riot gear moved down the steps, clashing with demonstrators.