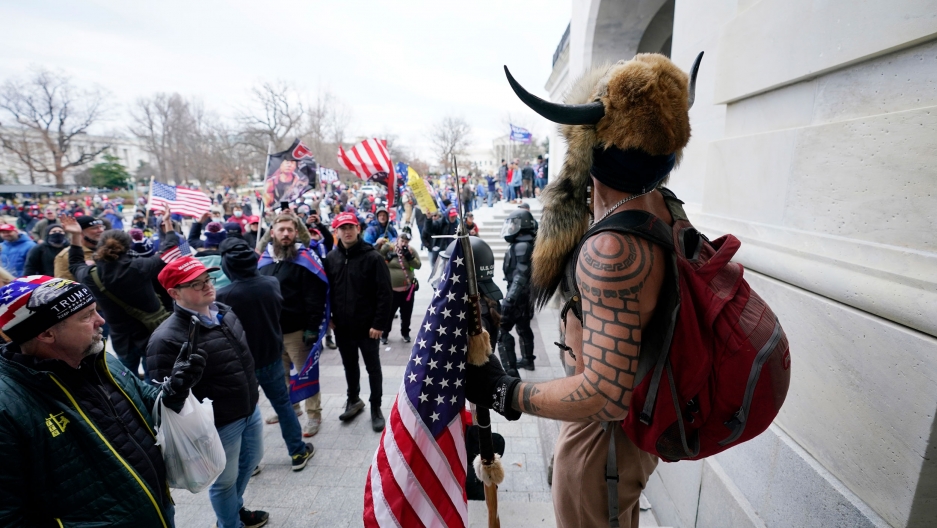 Trump supporters gather outside the Capitol building in Washington, Jan. 6, 2021.

Despite saying he disagreed with the official outcome, President Donald Trump for the first time acknowledged his defeat in the Nov. 3 election and President-elect Joe Biden's victory and announced there would be an "orderly transition on January 20th."

Trump's acknowledgment came after a day of chaos and destruction on Capitol Hill as a mob of his supporters stormed the Capitol building and unleashed unprecedented scenes of mayhem as it tried to halt the peaceful transition of power. Members of Congress were forced into hiding, offices were ransacked, and the formal congressional tally halted for more than six hours.

"Even though I totally disagree with the outcome of the election, and the facts bear me out, nevertheless there will be an orderly transition on January 20th," Trump said in a statement posted to Twitter by his social media director. His own account had been locked by the company for posting messages that appeared to justify the assault on the seat of the nation's democracy.

The statement was the first time Trump formally acknowledged his loss after spending the last two months refusing to concede and lobbing baseless allegations of widespread voter fraud, even though his own Justice Department, federal courts and state governments have said repeatedly the vote was carried out freely and fairly.

Trump's refusal to accept reality and his incendiary rhetoric reached a breaking point Wednesday when his supporters violently occupied the Capitol in one of the most jarring scenes ever to unfold in a seat of American political power. Authorities said four people died during the violence, including one woman who was shot by an officer outside the House chamber.

Trump had encouraged his supporters to march on the Capitol to protest lawmakers' actions, and later appeared to excuse the violent occupation by the mob, which forced its way inside and clashed with police. 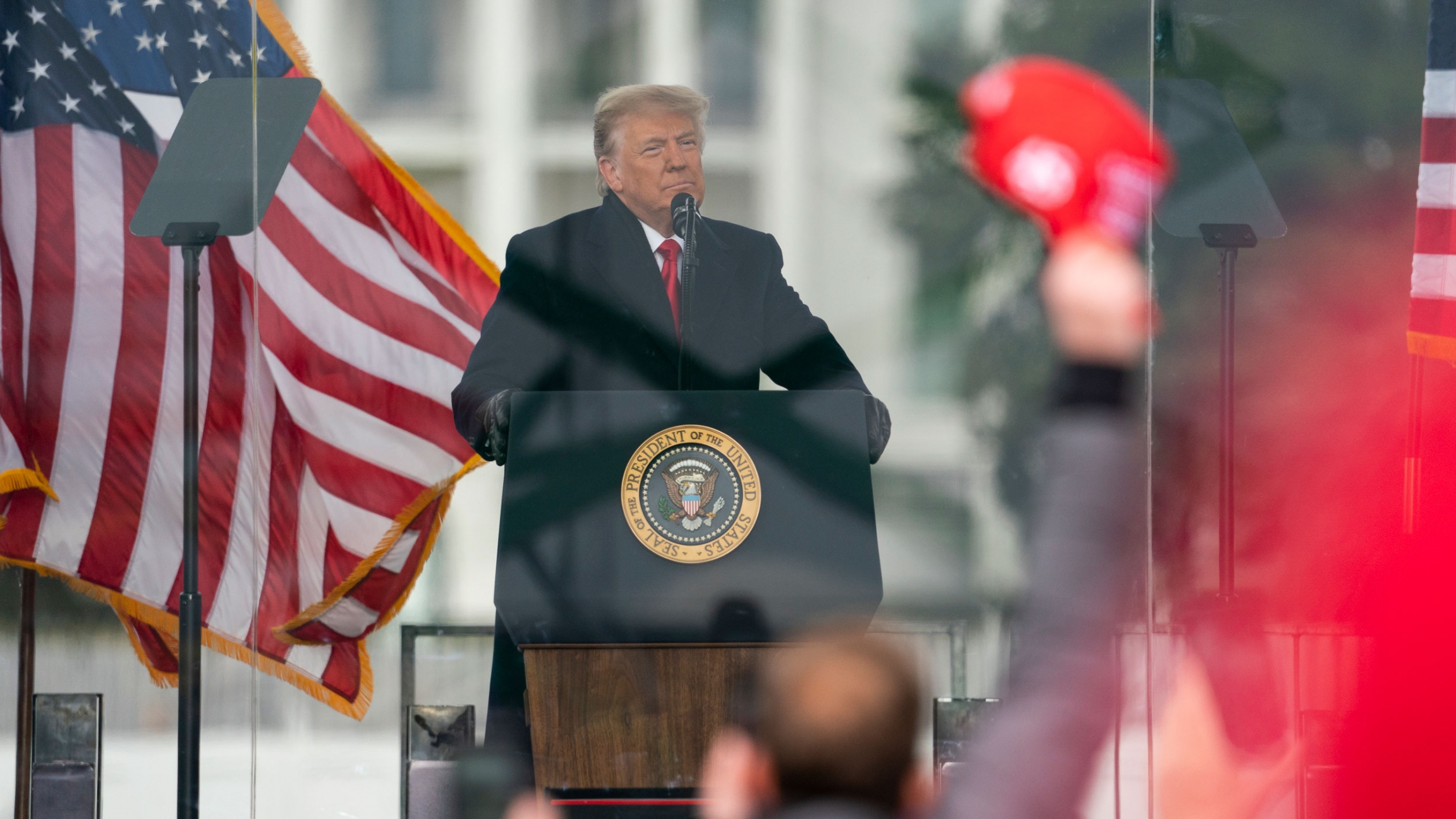 "These are the things and events that happen when a sacred landslide election victory is so unceremoniously & viciously stripped away from great patriots who have been badly & unfairly treated for so long," Trump wrote in a message that was later deleted by Twitter. He added, "Go home with love & in peace. Remember this day forever!"

Trump's response to the violence underscored his monthslong obsession with trying to overturn the results of the election. He has spent the final days of his presidency angrily stewing and lashing out at Republicans for perceived disloyalty while refusing to acknowledge his loss or concede.

Trump's statement could not be posted on his Twitter or Facebook feeds because both accounts had been blocked from his posting.

Trump spent much of Wednesday afternoon watching the insurrection on television from his private dining room off the Oval Office. But aside from sparing appeals for calm issued at the insistence of his staff, he was largely disengaged. Instead, a White House official said, most of Trump's attention was consumed by his ire at Vice President Mike Pence, who defied Trump's demands by acknowledging he did not have the power to unliterally choose the next president. The official was not authorized to discuss the matter and spoke only on the condition of anonymity.

Trump only reluctantly issued the tweets and taped a video encouraging an end to the violence. The posts came at the insistence of staff and amid mounting criticism from Republican lawmakers urging him to condemn the violence being perpetrated in his name, according to the official.

And even as authorities struggled to take control of Capitol Hill after protesters overwhelmed police, Trump continued to level baseless allegations of mass voter fraud and praised his loyalists as "very special."

"I know your pain. I know your hurt. But you have to go home now," he said in a video posted more than 90 minutes after lawmakers were evacuated from the House and Senate chambers. "We can't play into the hands of these people. We have to have peace. So go home. We love you. You're very special." 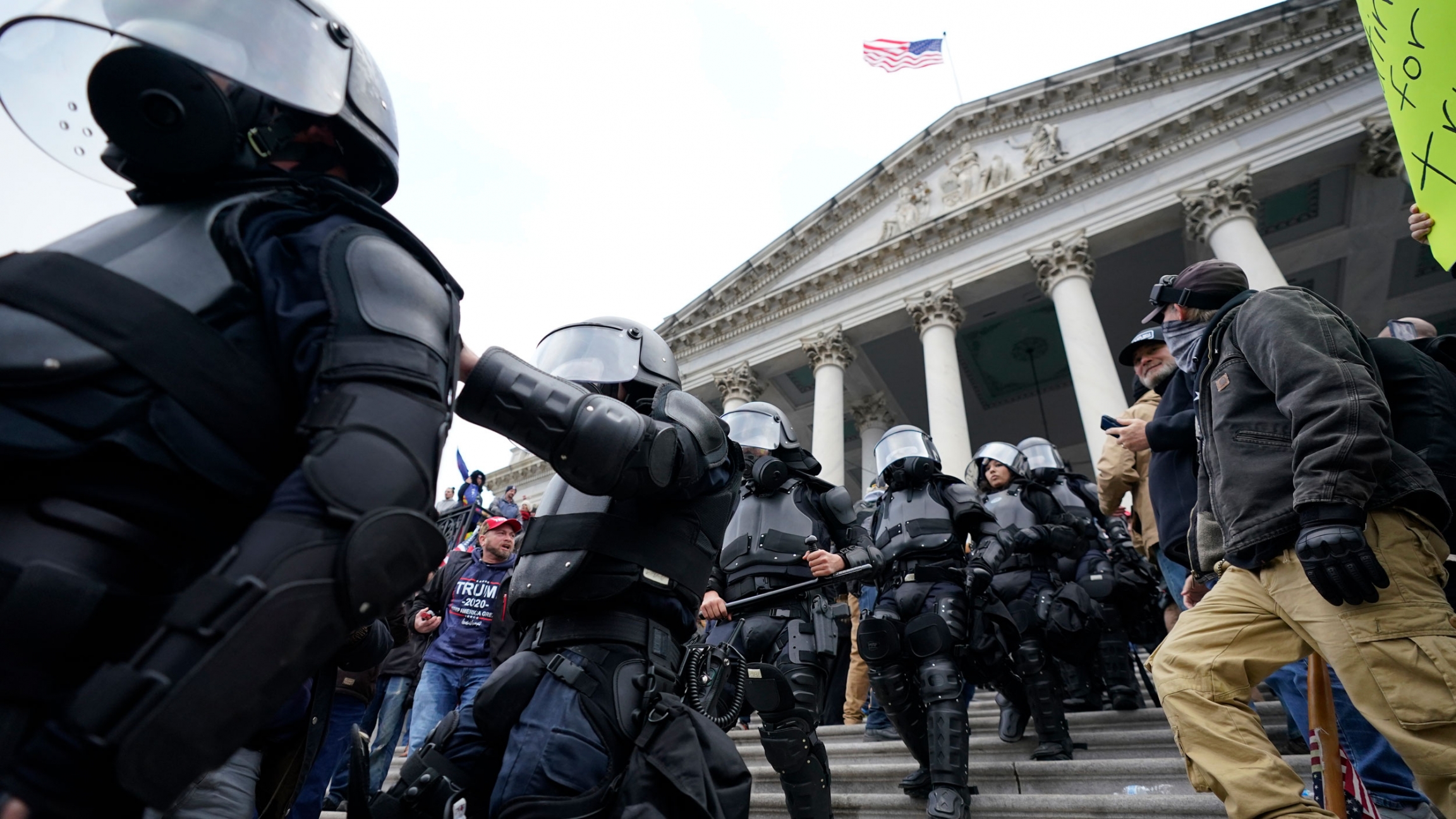 Police in riot gear walk out of the Capitol building in Washington. As Congress prepared to affirm President-elect Joe Biden's victory, thousands of people gathered to show their support for President Donald Trump, Jan. 6, 2021.

The violence, coupled with the president's tepid response, alarmed many in the White House and appeared to push Republicans allies to the breaking point after years of allegiance to Trump. After four years with no shortage of fraught moments, Wednesday's events quickly emerged as the nadir of morale in the Trump White House, as aides looked on in horror at the chaos at the Capitol Trump had fomented.

A number of White House aides were discussing a potential mass resignation, according to people familiar with the conversation. And others quickly departed.

Other aides indicated they planned to stay to help smooth the transition to the Biden administration. And some harbored concerns about what Trump might do in his final two weeks in office if they were not there to serve as guardrails when so few remain.

Trump's begrudging statement acknowledging defeat came after even longtime allies floated whether members of his Cabinet should invoke the 25th Amendment and remove him from office. Former New Jersey Gov. Chris Christie told ABC late Wednesday that "responsible members of the Cabinet" should be thinking about fulfilling their oath of office, adding that Trump had "violated his oath and betrayed the American people."

Conversations about removal took place among administration aides and Republican lawmakers on Capitol Hill, according to people involved in the deliberations, but there did not appear to be serious discussion to do so by his Cabinet, of whom a majority would have to vote to sideline him.

Trump has been single-mindedly focused on his electoral defeat since Election Day, aides said, at the expense of the other responsibilities of his office, including the fight against the raging coronavirus. Indeed, it was Pence, not Trump, who spoke with the acting defense secretary to discuss mobilizing the DC National Guard on Wednesday afternoon.

On Wednesday, Trump effectively banned Pence's chief of staff, Marc Short, from the White House, an official said, believing him to have been the driving force behind Pence's refusal to overturn the vote.

Hours earlier, Trump had appeared at a massive rally near the White House, where he continued to urge supporters to fight the election results and encouraged them to march to the Capitol in remarks that were peppered with incendiary language and rife with violent undertones. At one point, he even suggested he might join them — a prospect that was discussed by the White House but eventually abandoned.

Earlier in the rally, his lawyer, Rudy Giuliani, had advocated what he had called "trial by combat."

As the violence raged, Republican lawmakers and former administration officials had begged Trump to tell his supporters to stand down.

By Zeke Miller and Jill Colvin/AP