Ore Koren is a scholar of civil conflict and political violence. Before the November 2020 election, he wrote a story for The Conversation about the likelihood of election-related violence in the US. So The Conversation went back to him on Wednesday, while what some are calling an insurrection unfolded at the US Capitol, to ask him for some perspective on the event. This transcript has been edited for length and clarity.

Naomi Schalit: You’re a scholar of political violence. What were you thinking as you watched what’s happened at the U.S. Capitol?

Ore Koren: First of all, I felt pretty stunned. I think that’s a natural response to this. This is a new situation; it shows the power of misinformation and stuff that we’re not really good at dealing with.

My research focuses on organized political violence, which often happens in places where the state does not have much power to prevent violence, where the economy is underdeveloped, where democratic institutions are weak, and where there is a history of organized violence. And usually, when we see events at this magnitude, they are accompanied by many casualties, which thankfully was not the case today.

What happened at the Capitol, from what I can tell, was a messy riot where people lashed out at the heart of American democracy, but it remains unclear how organized an effort this was.

Still, it is kind of shocking. We have the biggest economy in the world. Based on what we see in the research, weak economic performance is a strong predictor of organized political violence. The people marching on the Capitol have much more to lose than to gain from this, and to me that’s puzzling.

With an incumbent who has been advocating for a strong law-and-order agenda, many people did not expect this. In a country with a strong domestic security apparatus, militias and vigilantes hurt rather than help in promoting the rule of law.

What separates the US and other advanced and militarily capable democracies from other countries where deadly election violence happens is the ability to wage an effective state response and very quickly implement the rule of law, cracking down on both the perpetrators and any groups they might be affiliated with.

One example of a very effective state response was in Michigan, where the militias plotting to kidnap the state’s governor were quickly apprehended by federal authorities. 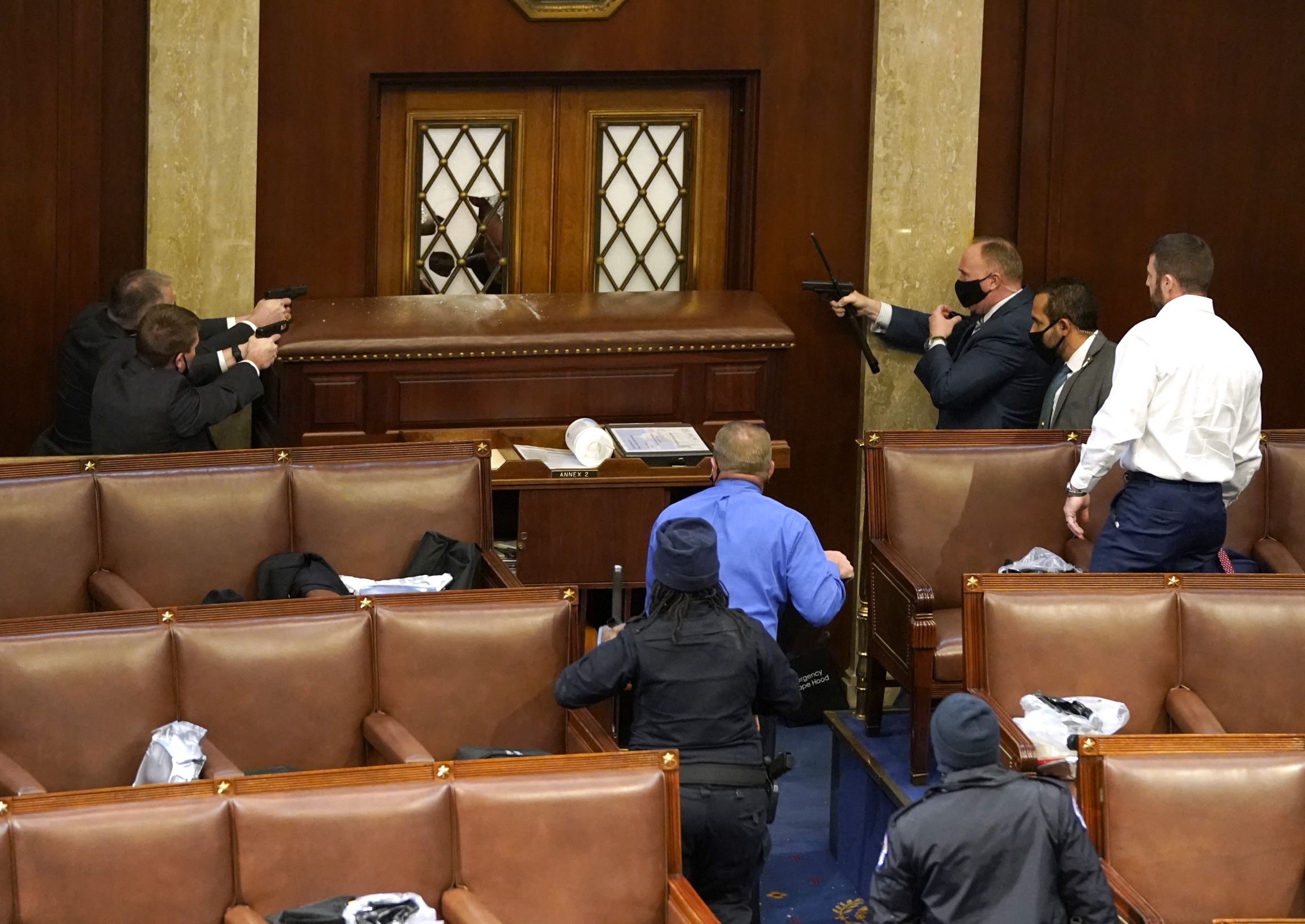 US Capitol police officers point their guns at a door that was vandalized in the House chamber during a joint session of Congress on Wednesday in Washington, DC.

How does this compare with political violence in countries you’ve studied?

Compared to other countries, I’m hoping it won’t get to that threshold of being more extreme. A lot of violence actually happens when a party refuses to give away power or a party blames the other for cheating. Well, that’s kind of what we saw happening here, right, one party was blaming the other for cheating. Only here, we had lots of evidence to the contrary, and we had legal and institutional ways of verifying any cheating or lack thereof.

In the US, most of the election challenges happened through formal legal channels. The main problem in places where we see violence happen is because they don’t have these kinds of institutions to deal with this, courts, all those things that our legal system can handle. But in countries where such institutions are weak, the state can’t handle that, and can’t address election challenges through a peaceful process. In this case, we see many political leaders, and not only angry citizens, saying those political institutions are not valid.

But what you’ve got in the US is a group of people who actually don’t believe that those institutions handled this, that it’s all corrupt, that it’s all fake and not real and cheating and plots happened. And we’ve had a president saying that.

Well, you have the president saying he was cheated, but going through the legal channels. The president didn’t just go and say, “OK, let’s go charge the Capitol,” although Wednesday morning’s speech could definitely be interpreted as instigating something like this. Until now, his rhetoric could be considered more about mobilizing support, and trying to create enough reasonable doubt that could then be used to pressure the results through formal channels.

But we do have a very unpredictable incumbent pushing the legal envelope during the worst pandemic in a century. What we’re seeing today, I think, has a lot more to do with his unpredictability and things we can’t account for in models we use to study political violence events. It’s been more than two months since the election and we didn’t see any serious violence until now, but as the legal options closed, the situation became more problematic. We don’t often see election-related violence months after an election. 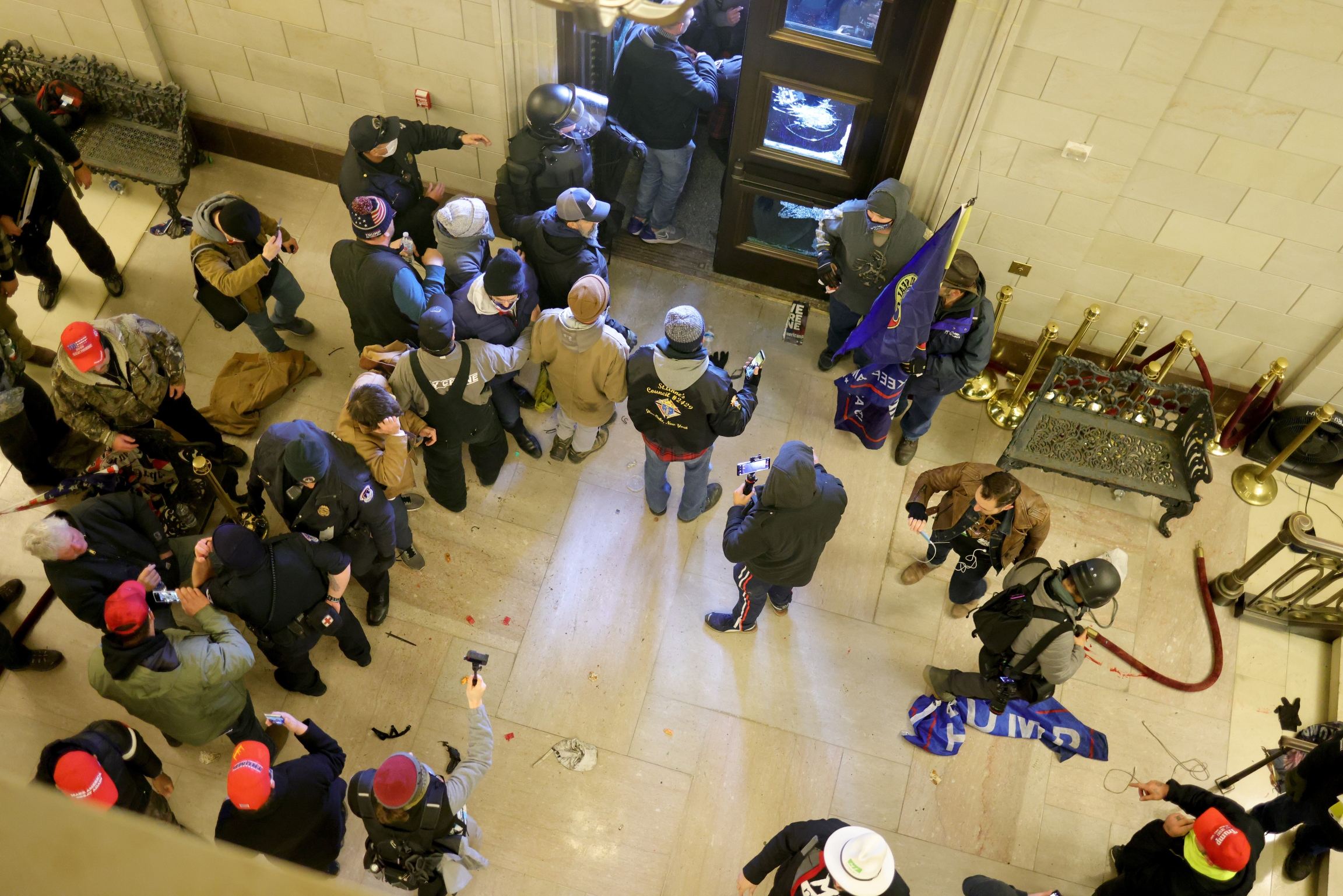 What do you think this means for the stability of the US government or US elections?

I’m not an election expert, but it’s a bad precedent. We don’t have a recent history of election violence and, now we can say we do have it, and that’s not a good thing.

What hugely contributed to all of this is misinformation. People mobilized based on a conspiracy with no evidence. I think this is a major problem that has to be addressed — I don’t know how. But it is really crucial to address the underlying problem — that people believe in what they feel is real, not what is real.

Once you engage in political violence, it becomes easier to do it again. But if there’s an effective state response to these events, then it can help strengthen those institutions.

So, I think a lot of people will be saying, look, this is all going to have long-term negative implications. But there’s also a possibility that this can actually help in the long run by showing the grave consequences of manipulating democratic institutions for political gain. Again, it depends on how the state and politicians and security and everybody responds to this. But having a history of political violence is a pretty strong predictor of future violence.

I think it’s really important for federal authorities to show their ability to tackle this. When it comes down to it, the government must show that it can protect American democracy, through force if necessary.

Naomi Schalit is a senior editor of politics and Society at The Conversation. This article is republished from The Conversation under a Creative Commons license. Read the original article.