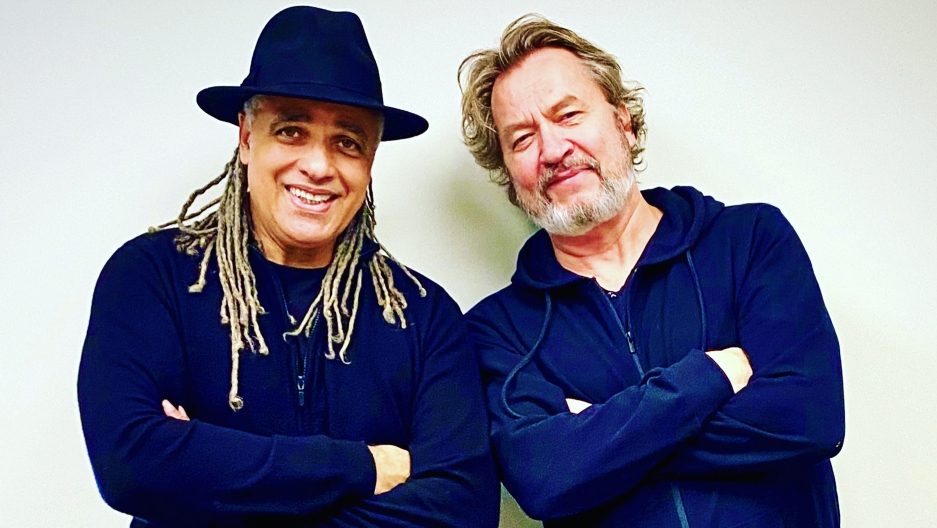 Courtesy of the artists.

A musician's life is usually spent on the road, performing. But in 2020, the coronavirus pandemic brought a new set of challenges with shut down music venues and canceled concerts and music festivals.

Since then, musicians' lives have not been what they used to. Some found ways to perform on rooftops, virtually or moved their concerts to empty museums, like cellist Camille Thomas.

It was also a tough year to release new music. But composer and producer Mino Cinélu and jazz trumpeter Nils Petter Molvær managed to do just that.

French musician Cinélu, who played with Miles Davis as a percussionist, and Molvaer, from Norway, released an album together titled "SulaMadiana," inspired by their combined roots from two islands far apart — Madiana (the Indigenous name for Martinique), and the island of Sula in Norway.

"Sula is the island I come from, which is in the northwest, it's just the entrance into the Fjords of Norway," Molvær explains. "And Madiana is the original word for Martinique," also known as the island of flowers.

Related: Tunes that kept The World spinning in 2020: A playlist

The two had planned to tour this year to promote the album, but between lockdowns and Molvær getting the coronavirus, those plans were nixed. Molvær says he is better now but has not fully recovered. "There is some things with the taste and I played some concerts, solo concerts, and actually, like, after an hour, I could really feel there is something which is not working properly in the lungs," Molvær adds. "So, it takes time."

Cinélu, who also had the virus back in March, kept up with an abbreviated performance schedule. He was tested before, during and after concerts. Schedules were constantly changing or even canceled. Sometimes he says, there were "like, three people literally in a vast theater."

Related: Four musicians grapple with the same question: What is home?

Given what both musicians have been through this year, they have started to think about the new normal when it comes to composing together, producing, recording and touring.

"You can't just put up a really long tour," Molvær says. "You can't go on a European tour for three weeks or something. I don't know when that will happen when going from country to country, you have to be 10 days in quarantine."

Still, both artists remain optimistic that next year will be better for musicians. "Learn the language, immersed in the culture. This is, come on, positive. The glass half full," Cinélu says.