Conveyor belts rattle at the Stepanakert Brandy Factory while technicians in white coats peer into flasks and workers pack bottles into cases. It’s the first day of business in Nagorno-Karabakh’s de-facto capital since war erupted on Sept. 27, and operations director Vladik Alibabayan is seeing what can be salvaged.

Related: Nagorno-Karabakh refugees are beginning to return home, but many are still displaced

“Some of our fields near the frontlines where we grew grapes and pomegranates are now under the control of Azerbaijani forces, so we don’t know what will happen next. The loss for the industry will be significant.”

“We managed to collect 1,700 tons of grapes before the war and then everything shut down,” Alibabayan explained. “Some of our fields near the frontlines where we grew grapes and pomegranates are now under the control of Azerbaijani forces, so we don’t know what will happen next. The loss for the industry will be significant.”

It could have been worse.

A shaft of sunlight beams through a small hole in the roof of a warehouse next door to the brandy factory. Underneath, protruding from the bottom of a cylindrical tank is a gigantic unexploded rocket, one of the thousands that rained down on the city during Armenia’s 44-day war with Azerbaijan. 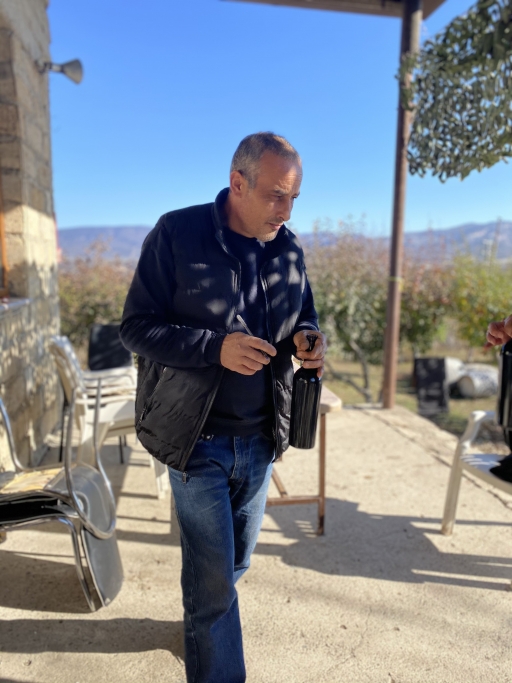 Winemaker David Astsatryan on his farm in Stepanakert, Nagorno-Karabakh.

The rocket hit an empty tank, narrowly missing a vat full of 15-year-old Madatoff cognac. A lucky escape for the factory but for the country’s nascent wine industry in general, the war has been a huge setback. The latest conflict flared up in the middle of the harvest season.

As the country mobilized for war, grapes wilted on the vine.

But some people were able to adapt. At a small farm on the other side of the city, artisan winemaker David Astsatryan makes brandy from grape residue on a rattling homemade stove.

On the first day of shelling on the city of Stepanakert, Astsatryan’s son headed for the frontline. Astsatryan joined him days later with a few hundred bottles from the cellar to boost the troops’ morale.

“Khndoghni is our local grape, there’s no sense to use any others,” Astsatryan said, holding up a bottle to the light. “...This is a trademark of Karabakh, and it’s been growing here for centuries with this soil, air and sunshine. If you grow the same grape in Armenia, it tastes totally different.”

Khndoghni is derived from the word “laughter” in Armenian, though there has been little to laugh about this year. Astsatryan’s land, bathed in early December sunshine, looks out across the valley and up to the mountaintop city of Shushi.

As the highest and most strategic settlement in Karabakh, the war was effectively finished when Azerbaijan captured it, ending over three decades of Armenian control. And now, though people displaced during the war are coming back home to Stepanakert, many feel vulnerable to attack from the new Azerbaijani positions above them.

“I see the people coming back,” he said cautiously, casting an eye up to the hills, “but I don’t see life returning to normal. We’ll have to wait and see.”

Vahe Keushguerian is one of the top winemakers and entrepreneurs in Armenia. For him, encouraging investment in the vineyards of an unrecognized country in a warzone has never been easy. Under most international law, Nagorno-Karabakh is considered part of Azerbaijan.

“Institutions, by their charter, would not touch Karabakh, because of the status. And vineyards are a very long-term investment, it’s at least 10 years until you can even see something let alone get a return.”

“Institutions, by their charter, would not touch Karabakh, because of the status. And vineyards are a very long-term investment, it’s at least 10 years until you can even see something let alone get a return.” Keushguerian explained. “So, I see two ways out for Karabakh; it is formally acknowledged as a region of Armenia, or as an independent country, then there might be funding opportunities available.”

International recognition of the territory seems like a pipe dream but, despite the ruins of war, Keushguerian said he wants to start a cooperative winery, “as a symbol.” “Regardless of whatever calamity happened, we need to go on forward,” he said.

Armenia has one of the world’s oldest wine industries — archaeologists have unearthed fragments of jugs and presses dating back more than 6,000 years. But the country’s turbulent history has held it back from becoming a Napa Valley of the Caucasus.

For 70 years, the Soviet economy demanded that Armenia prioritize brandy production instead of wine, and occasionally experimented with prohibition. Poverty in the 1980s and conflict with Azerbaijan also stymied business.

But in the last decade, Armenia has experienced a wine-drinking renaissance. In Vino, on Yerevan’s Martiros Saryan street, was the city’s first modern wine bar. Opening in 2012, with just 10 Armenian wines, it now sells over 180, with numbers from the Nagorno-Karabakh among the bestselling.

“By drinking wine from Karabakh I feel that people are connecting with the situation. ... You feel the 'terroir' in your glass — especially now.”

“By drinking wine from Karabakh I feel that people are connecting with the situation,” said Mariam Saghatelyan, a partner at the business. “Every single bottle of wine has the philosophy and ideology of that certain producer and the region. You feel the terroir in your glass — especially now.”

Just as the business was in full bloom, the war came to Armenia once again and some of the country’s most notable vineyards had to be urgently evacuated and are now behind enemy lines. Within days, bottles from the lost territories flew off the shelves to be resold by speculators and, Saghatelyan said, decades-old family businesses evaporated overnight.

“The industry is just about to bloom, then this happens. It’s heart-breaking and there are all these unanswered questions. What will be the fate of those wineries?”

Saghatelyan hopes that the conflict will encourage outsiders, including Armenia’s huge global diaspora, to support the struggling region even more.

“We have to treasure what we have, and then other people might be interested, as well. ... Making wine here, you always wonder what if another war breaks out? But if you keep thinking ‘what if,' you never really do anything. Life is short, it really is.”

War and the COVID-19 pandemic have wrecked the Armenian economy. The same attachment to the land of Nagorno-Karabakh that has produced such fine wines has also cost thousands of lives.

But against all the odds, Armenia’s winemakers are defiant and hope that by invigorating the country’s ancient tradition and boosting local businesses, the region one day might have something to celebrate.