Never depict an Arab leader literally in drawing or print: That was a long-established rule across many Middle Eastern and North African countries until 2011 — when uprisings swept across the Arab world.

Political cartoonists quickly broke that long-standing rule by drawing Arab leaders literally — not just symbolically — and their artwork spurred protesters to continue to take to the streets and demand regime change after decades under authoritarian rule.

Related: 7 cartoonists who have faced violence and threats for their work

The World's Carol Hills catches up with two cartoonists who broke those rules during the Arab uprisings: Syria's Ali Ferzat and Egypt's Mohamed Anwar.

The cartoons of Mohamed Anwar

This image, one of Mohamed Anwar's early cartoons, shows a person sitting in a chair but the viewer can’t see their face. Anwar drew this cartoon after he saw a fellow cartoonist he admired daring to cross the red line and depict then-President Hosni Mubarak, but from the back. You don’t see Mubarak’s face but everyone knows it’s him. The man we can see is holding the Quran and says to the man in the chair: "The infidels want to change your words, your majesty, and make amendments to the constitution!"

Anwar drew this after Mubarak changed the Egyptian constitution to allow his son to run for president. The opposition was calling on him to remove these amendments. 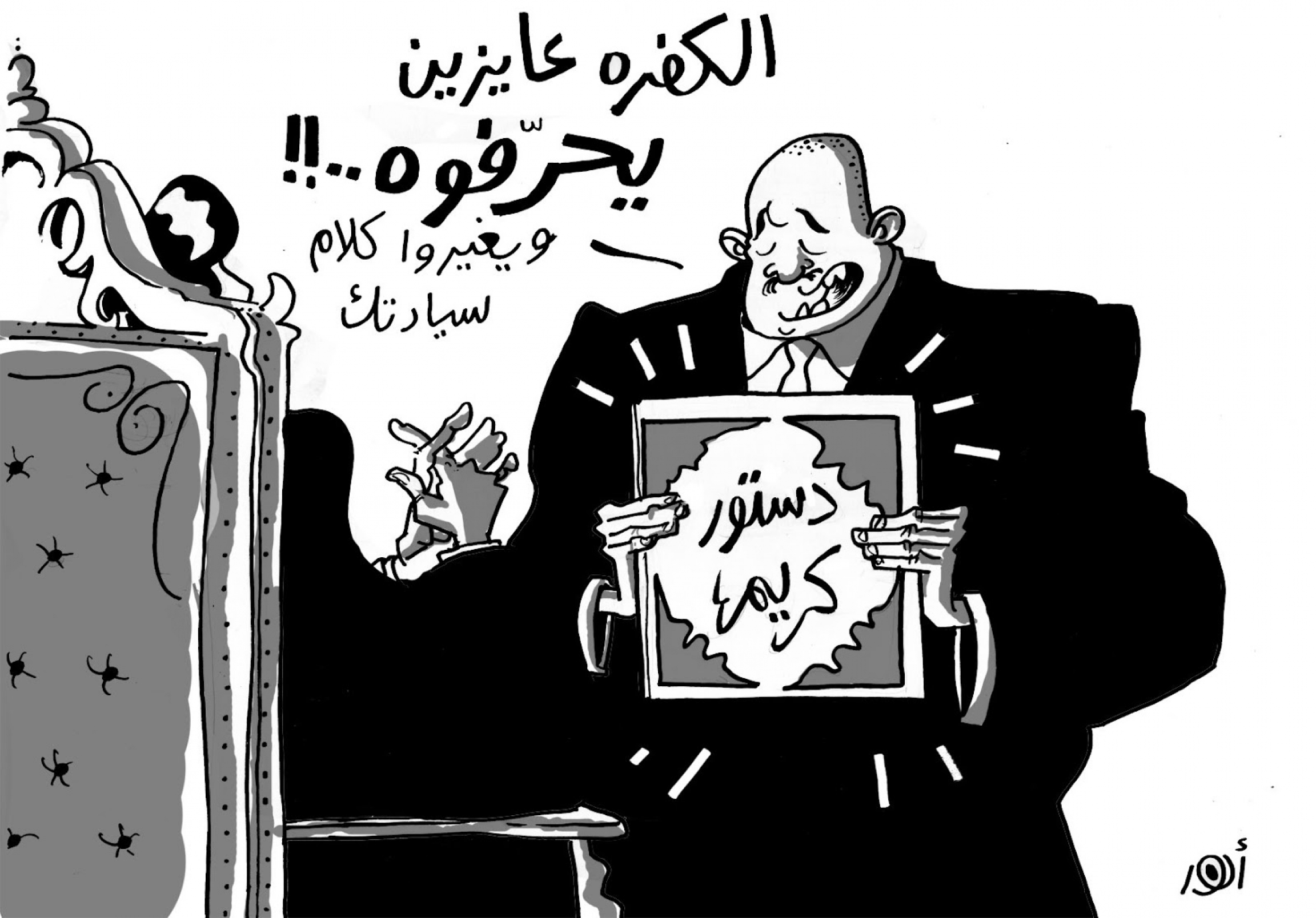 ‘Congratulations, you got your country back!’ by Anwar, Egypt, 2011

This is the first cartoon Anwar drew after the Jan. 25, 2011, revolution in Egypt. A doctor emerges from the hospital room holding a new baby and tells the Egyptians gathered that they have a new country, a new Egypt. Anwar now considers this one of the silliest cartoons he ever drew because it shows what a romantic view he and others had of the revolution and the changes it would bring. 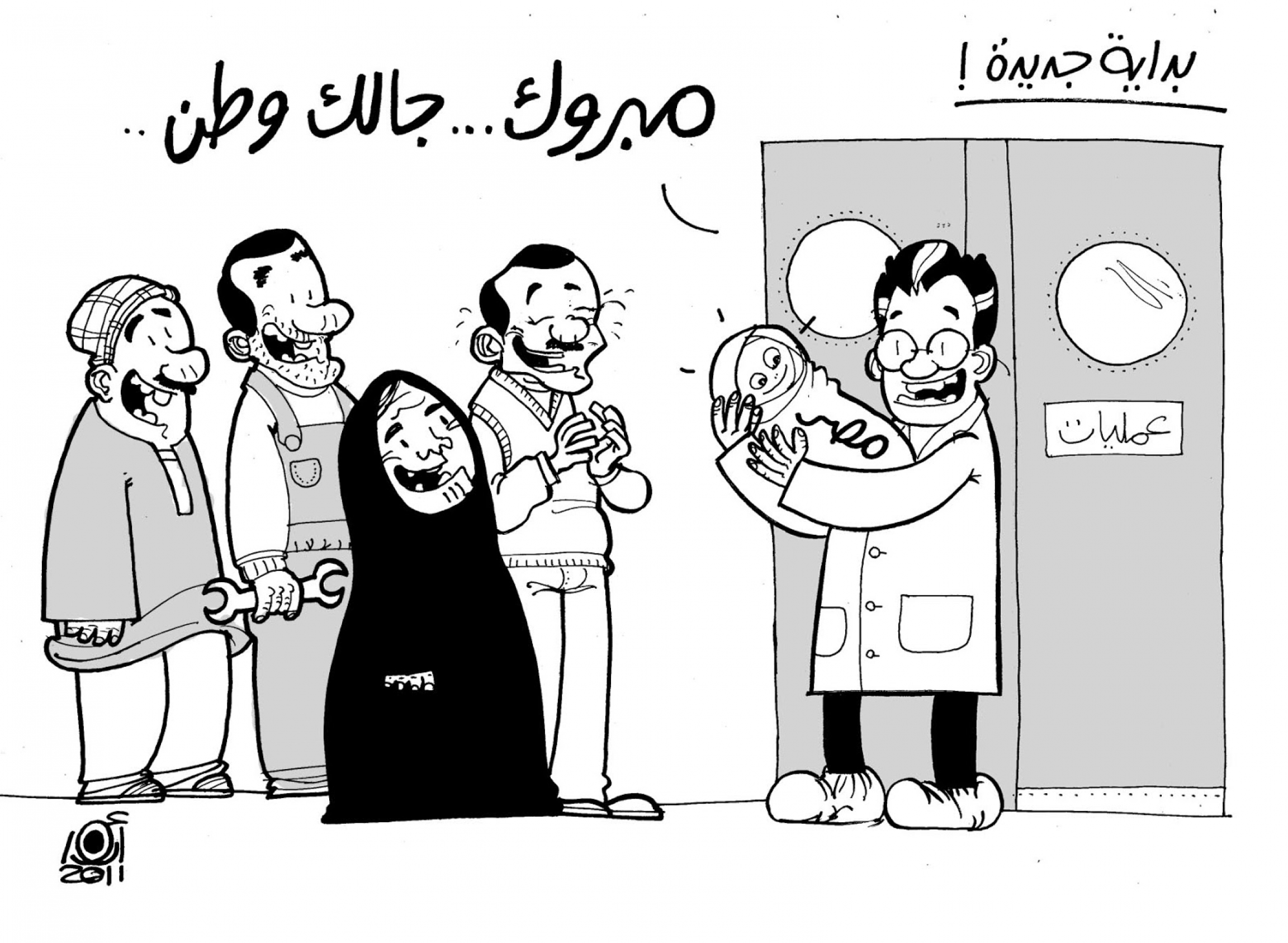 "Congratulations, you got your country back!" by Anwar, Egypt, 2011.

‘Dear reader, can you help this poor citizen make his way through these monsters?’ by Anwar, Egypt, 2012

This cartoon shows the maze of politics that Egypt experienced in the first year after the Jan. 25, 2011, revolution. You see a member of the military council that ruled after Mubarak stepped down, the leader of the Muslim Brotherhood, and a representative of the old regime. The cartoon illustrates the political trap Egyptians were finding themselves in and how the dreams of the revolution had not yet been realized. 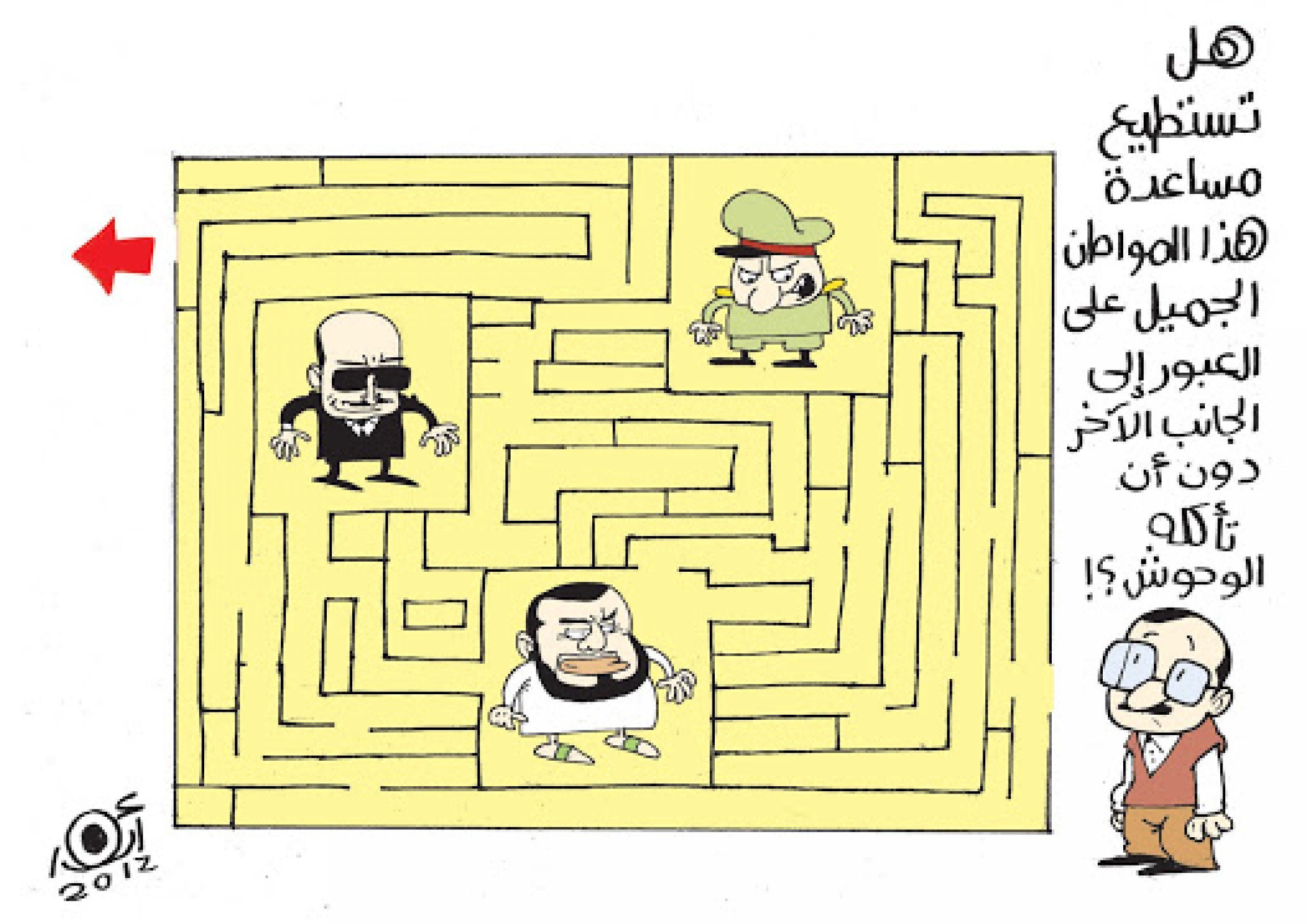 "Dear reader, can you help this poor citizen make his way through these monsters?" by Anwar, Egypt, 2012.

Devil: “You know what we’ll do? We’ll change the constitution.”

This cartoon was drawn in 2015 after the initial calls to change the constitution to allow Egyptian President Abdul Fattah al-Sisi more presidential terms. The effort failed but three years later the constitution was changed to allow Sisi to stay in power until 2030. 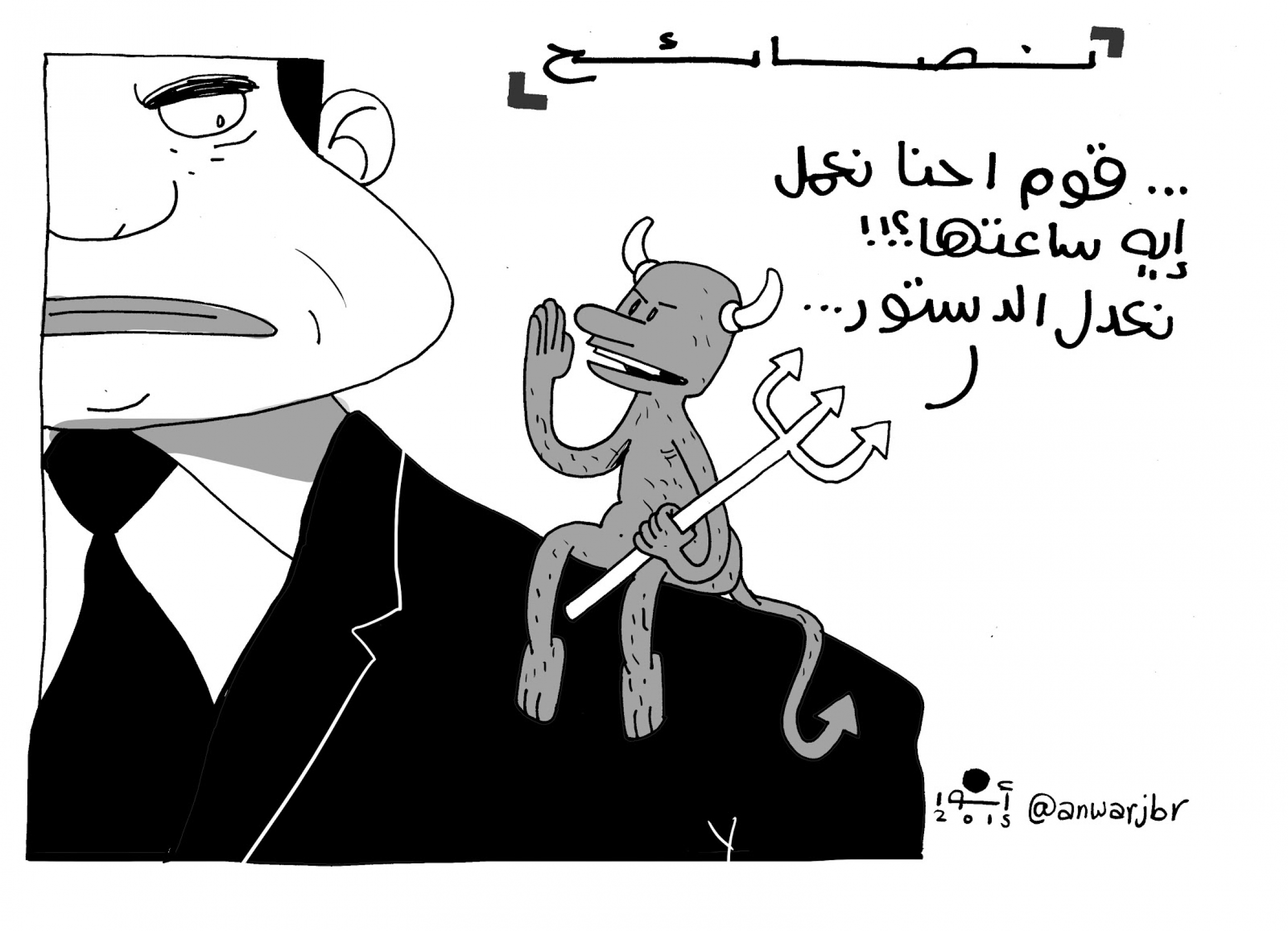 The cartoons of Ali Ferzat

For decades, Ali Ferzat had never criticized the Syrian government directly — it was not allowed. Instead, he used a symbol to represent it: an empty chair. In this cartoon, Ferzat is moving toward a direct criticism of Syrian President Bashar al-Assad. For the first time, there is someone in the chair but he is so small his legs don’t even touch the floor. But the epaulets on the shoulders show that it’s someone high up. And significantly, a bird is pecking at the chair leg. This government is going to break. 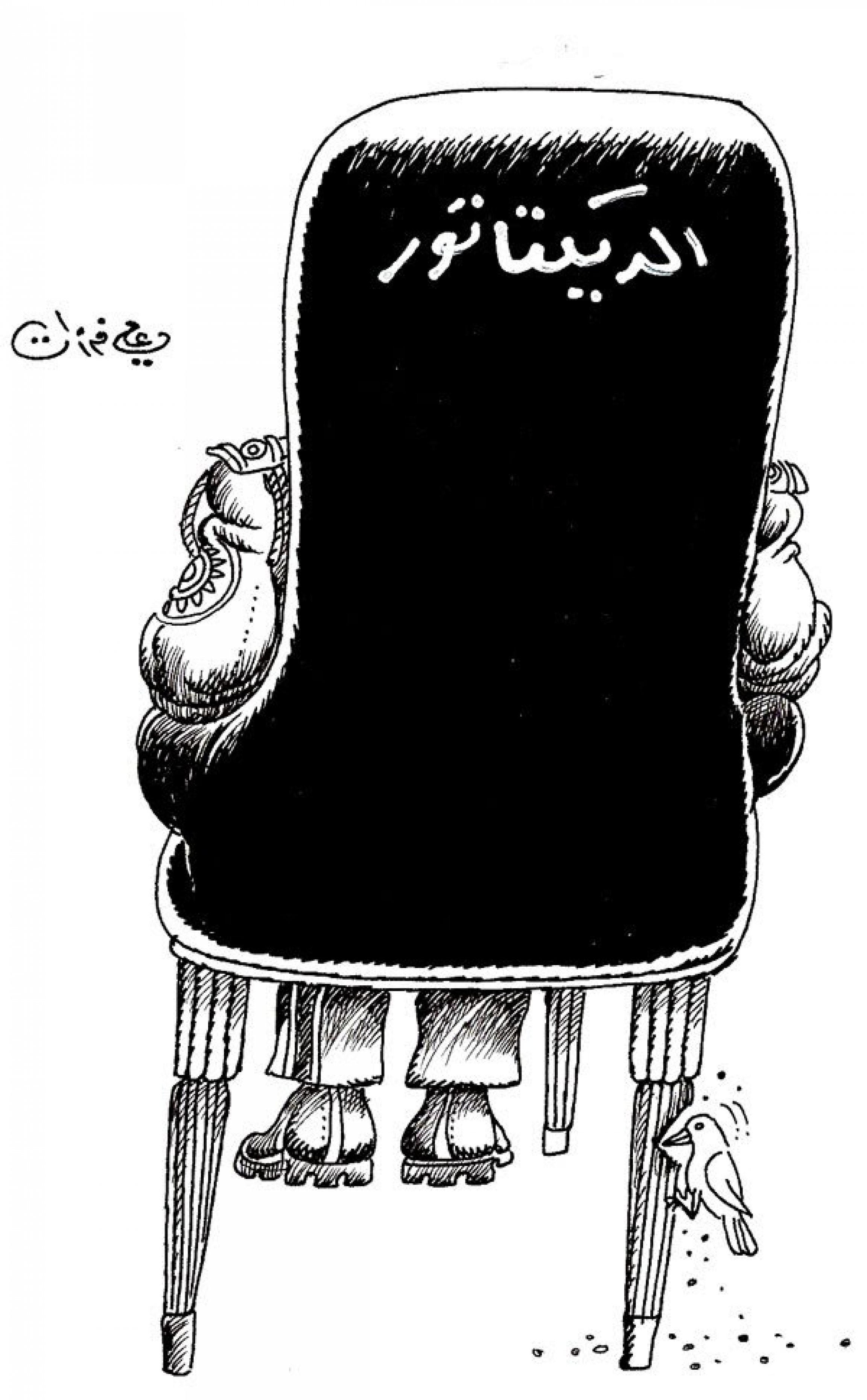 This is one of the early cartoons by Ferzat, where he broke the rule about criticizing the government and drew the actual face of Syrian President Assad. 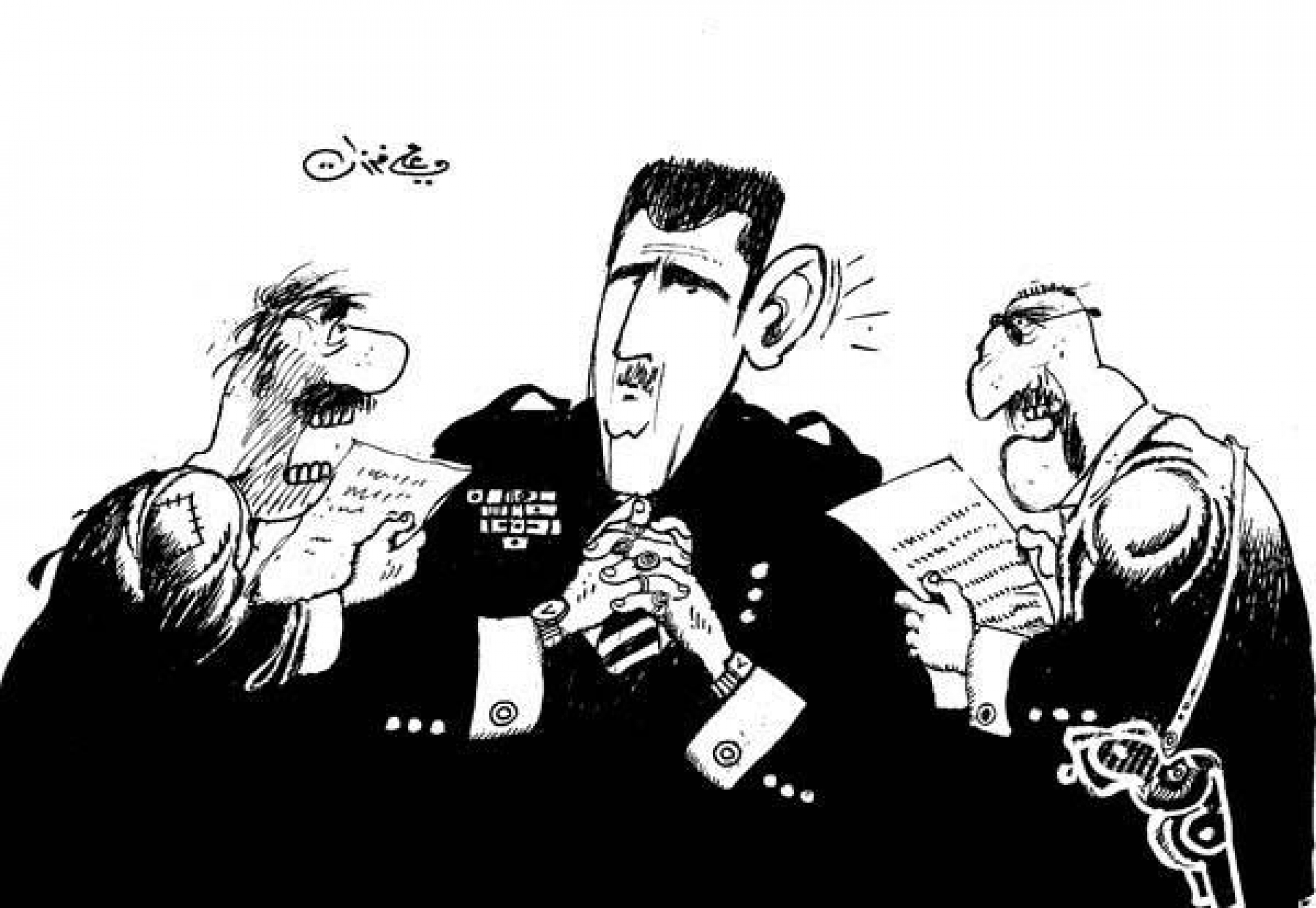 By June 2011, thousands of Syrians were out on the streets demanding reforms. This cartoon is a comment on how serious Ferzat believed Syrian President Assad was about real reform. 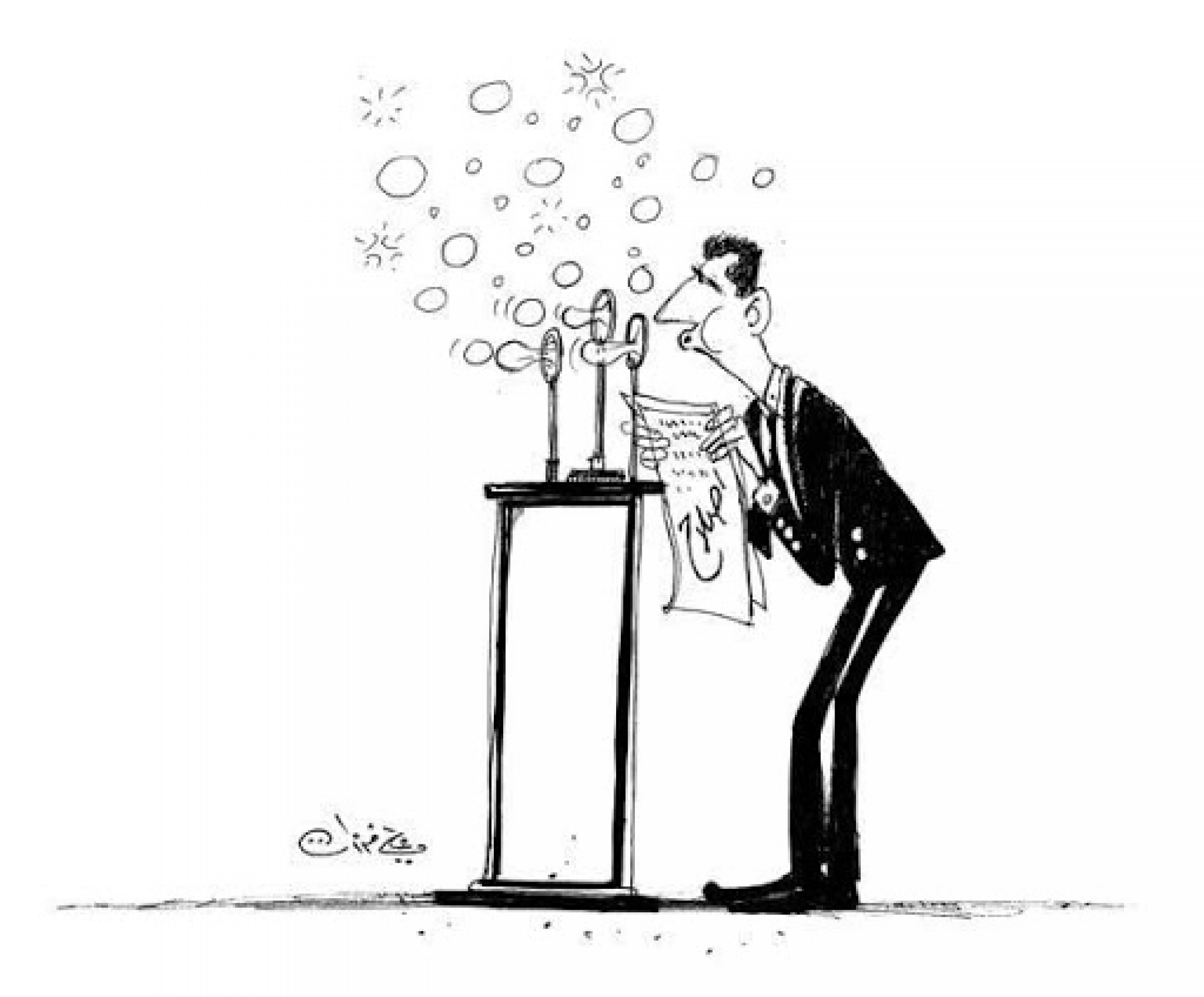 By summer 2011, Libyan leader Muammar Gaddafi had been forced out of the capital, Tripoli, and was on the run. Syrian President Assad was facing more and more criticism and protests from his own people. A few weeks later, Ferzat was pulled from a car and beaten and left for dead. Shortly after, he moved to Kuwait and has been in exile ever since. 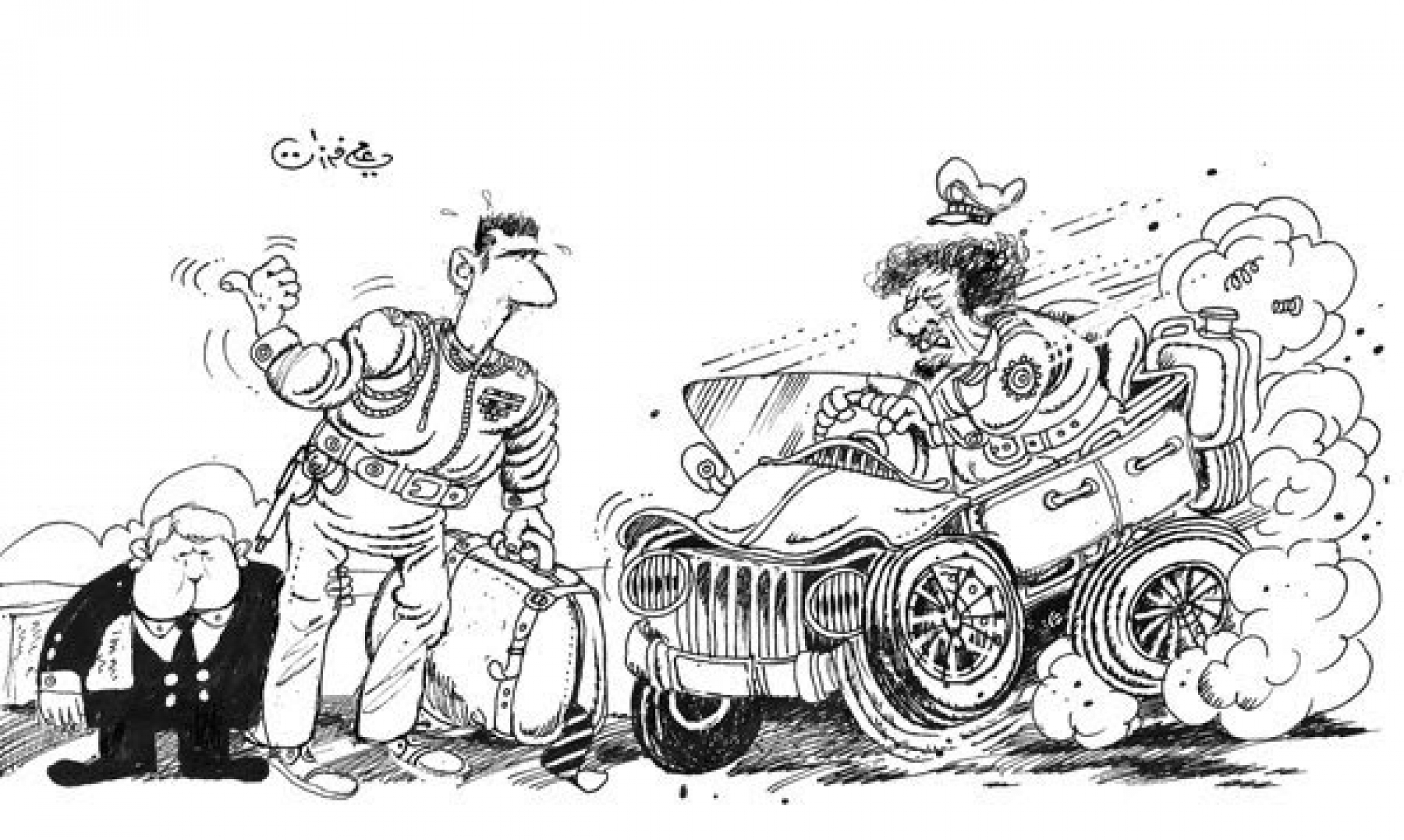