After nearly six years, the victims of the January 2015 terrorist attacks in Paris now have some closure. A court on Wednesday found 14 accomplices guilty of helping those who carried out the attacks at Charlie Hebdo magazine and Hyper Cacher kosher supermarket in which 17 people died, along with three gunmen. The sentences ranged from four years to life imprisonment.

Lassana Bathily was among the victims who were present at the court verdict. He has become a household name in France. In 2015, while working as a shelf stocker at Hyper Cacher, the Malian immigrant hid 15 customers from an ISIS-affiliated gunman and saved their lives. The anti-semitic attack on the supermarket was linked to the one at the Charlie Hebdo offices two days earlier.

Bathily, who is Muslim, was later praised as a national hero and made international news. France also granted him citizenship.

Since then, Bathily, 30, has traveled the world and been praised by leaders such as former US President Barack Obama and Israeli Prime Minister Benjamin Netanyahu.

Related: Does the spirit of 'Je Suis Charlie' endure in France today?

So you can imagine the excitement at Francois Charles Middle School in Plougasnou, a tiny hamlet on the western coast of Brittany, when Bathily visited to speak to students earlier this month.

Plougasnou has a special history: During World War II, its residents were part of the French Resistance and fought against France’s Nazi occupation. As students file into the cafeteria, the school principal Hervé Simon introduces Bathily as a sort of modern-day resistance leader.

Before Bathily launches into his talk, Simon reminds the students of the context they’re living in: France has seen more than 30 terrorist attacks in the last eight years. And the Charlie Hebdo trial, which unfolded over the last three months, took place against the backdrop of renewed terrorist attacks and debates over religion this year.

One of the most recent attacks was the beheading of a middle school teacher named Samuel Paty, who was killed in October after he showed his class satirical cartoons of the Prophet Muhammed during a lesson about freedom of speech. A framed photo of him sits on a desk next to where Bathily stands. 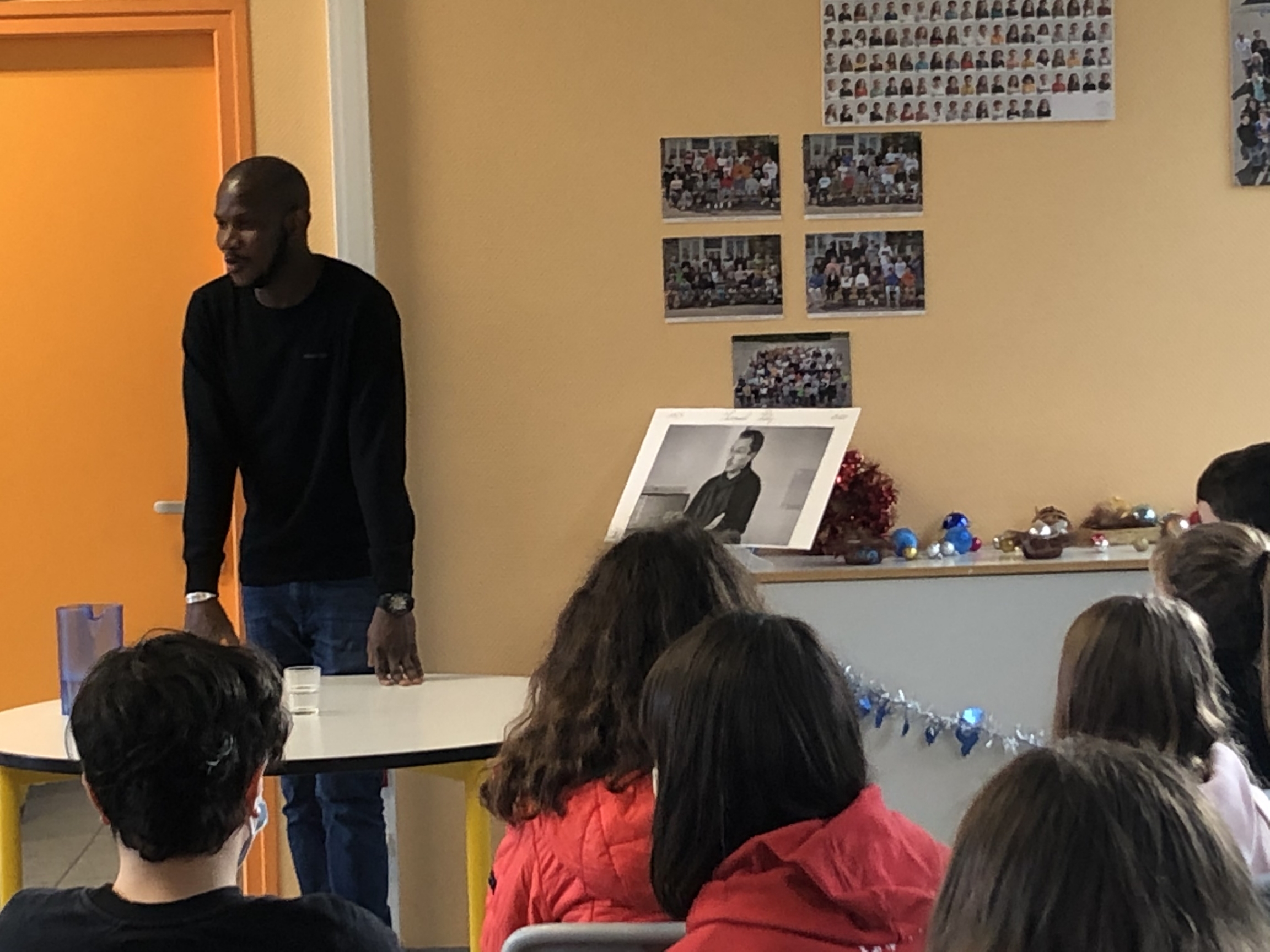 With that, a modest Bathily introduces himself to the students and begins by telling his personal story.

Born and raised in Mali, he came to France as an undocumented immigrant at age 16.

He spent his first night sleeping in a train station, and it would take years before he got a permit to work legally. But in 2012, he got a permanent job at Hyper Cacher, a supermarket in eastern Paris.

That’s where he was working on January 9, 2015. Bathily was finishing his shift in the basement inventory room when he heard gunshots coming from upstairs.

Quick on his feet, Bathily escorted some 15 customers into the basement and hid them in a cold storage room. They stayed there for four hours before escaping. Afterward, Bathily was recognized as a national hero.

He finishes his story for the students and opens up the floor to questions.

“Do you ever have nightmares about the attack?” a student asks.

“What do we do if a terrorist comes into our school?” another asks.

That leads to a frank discussion with the principal about school shooter protocols: where to seek help, when to run and how to act.

And then comes the question on many people’s minds in France.

“How did you react to the murder of Samuel Paty?”

“I was shocked,” Bathily says. “To be killed for showing caricatures to your students...for teaching them about French values and freedom of expression, it’s shocking. Teachers are putting their lives in danger by talking about French values.”

Simon says Paty’s beheading has brought a lot of fear and tension into French schools. He believes Paty’s death reinforced the importance of French values such as laicité, the country’s strict form of secularism.

“In France, religion is part of private life and laicité actually helps protect religion,” Simon says. “It tells people they have the right to believe or not believe.”

As for Bathily, he is a practicing Muslim but also a defender of laicité: he agrees that religion should be kept private.

That’s a belief for which he has received both praise and criticism. He says the criticism usually comes from other Muslims who view laicité as an attack on religion.

“I’ve even had people accuse me of being a nonbeliever,” Bathily says.

But for the students in Plougasnou, Bathily is simply a hero.

“He took all his courage to do this to save people,” says 14-year-old Balthazar. “For me, he is a hero.”

Bathily says he struggles with the word hero.

“I prefer the term good citizen,” he says. “A good citizen who simply acted quickly in the moment.”