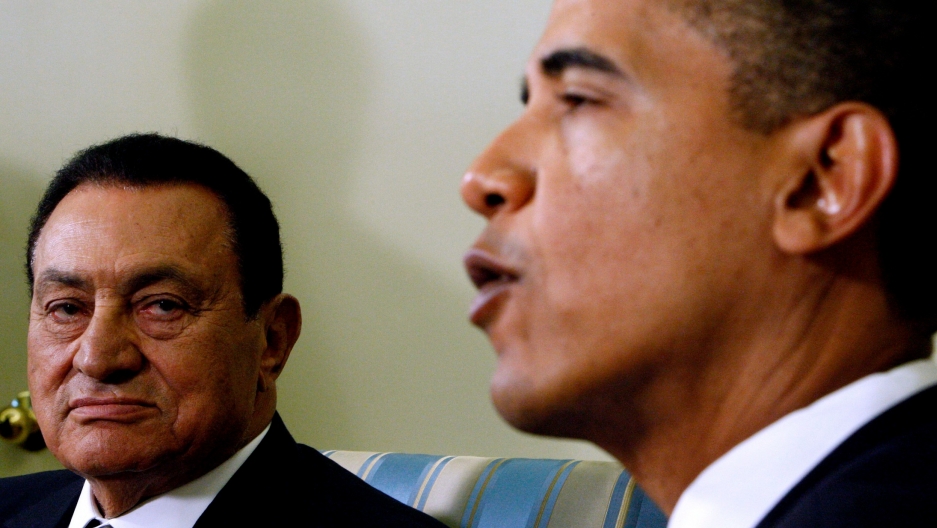 In this Aug. 18, 2009 file photo, US President Barack Obama meets with Egyptian President Hosni Mubarak, in the Oval Office of the White House in Washington.

This week marks the 10th anniversary of the start of the Arab uprisings.

Those who live in the region are still struggling to pinpoint why the uprisings didn’t fulfill their promise of greater democracy and a better life.

For more on the context, The World's host Marco Werman spoke with author Kim Ghattas, who grew up in Beirut and is now a fellow at the Carnegie Endowment for International Peace. She's also the author of "Black Wave: Saudi Arabia, Iran and the Forty-Year Rivalry That Unraveled Culture, Religion and Collective Memory in the Middle East."

Marco Werman: How are you reflecting on this ten-year anniversary? What stands out for you when you look back on those uprisings a decade later?

Kim Ghattas: I remember messaging back and forth with a revolutionary in Egypt when I saw how elated they were that they had actually managed to bring down Hosni Mubarak and they thought about how — this was it, this was a turning point, there was no going back. From now on, it would be freedom and justice and democracy. I said, "Be careful," because the elation of revolutions are not enough to solidify your gains. Because we had been through a revolution in Lebanon in 2005 when millions took to the streets and managed to push out Syrian troops who had been occupying the country for decades. And that was a huge victory. However, it was almost a Pyrrhic victory because what happened was the Syrian troops were gone, but the system — the deep state — remained.

You were a BBC reporter when the Arab uprisings began. Take us back to those early days when massive crowds took to the streets in Tunisia and Egypt. Where did you see the naivete?

As I was covering the State Department, I traveled with Hillary Clinton to Egypt just over a month after Hosni Mubarak had fallen. And she met with a group of revolutionaries who had been at Tahrir Square. And she asked them, "How are you preparing for elections?" That was the next big challenge. And the answer from one of them was, "We don't do politics, we don't do elections, we just do revolution." And that was a very telling moment about the huge disappointment that was coming their way as revolutionaries because the army and the Muslim Brotherhood were getting organized for the elections. And we saw the result of that.

So, it's interesting. America's responses to the uprisings were pretty diverse. In Egypt, Washington gave some vocal backing to the protesters in Tahrir Square. In Syria, of course, the engagement was very limited. Where do you think the US played a helpful role in fostering democracy movements during the uprisings? And where did it fail? It's kind of a mixed bag, isn't it?

It's a very mixed bag. I think Syria is a very big failure of the Obama administration. And it's very distressing to see that no officials from that administration have been willing to acknowledge where they've gone wrong and what they could have done differently. And it's very distressing to see [former] President Obama say that him stepping back from that red line that he had drawn about Bashar al-Assad's use of chemical weapons, whereby he said that if that would happen, the US would be forced to strike. And then in the end, he backed out from that.

President Obama described that as one of the best decisions or the one he was most proud of. That's not how it's seen in the Middle East — not only because it showed weakness, not only because it signaled that Bashar al-Assad could continue to kill with impunity, but also it opened the door to Russian involvement in Syria. Russian involvement has been absolutely devastating and deadly for the Syrian people.

But the other place where the Obama administration went wrong with Syria is that they gave a lot of vocal support, which made the Syrian opposition think that the cavalry was coming. And then they gave only very little actual support, just enough bullets to sustain the opposition and the rebels, but not enough for them to win decisive victories against the regime.

In Barack Obama's new memoir, "A Promised Land," the former president doesn't make it sound like change in the Mideast was especially high on his agenda. Here's what he said of Egypt's authoritarian leader, Hosni Mubarak: "I was enough of a realist to assume that had it not been for the stubborn persistence of those young people in Tahrir Square, I'd have worked with Mubarak for the rest of my presidency, despite what he stood for. Just as I would continue to work with the rest of the 'corrupt, rotting, authoritarian order,' as Ben like to call it — the controlled life in the Middle East and North Africa."

The former president is referring to Ben Rhodes, one of his national security advisors and speechwriters. Did President Obama's "realism," as he calls it, prevent grassroots uprisings from succeeding?

I find it really problematic to hear American presidents sound defeated when they talk about the authoritarian rulers of the region as though there is nothing they can do about it. They pretend that it's only because young people rose up that an American president could finally see the back of someone like Hosni Mubarak. These authoritarians are kept in place in large part by American support and by American money.

And I'm not one to blame all of the region's problems on America — far from it. I wrote a whole book about the responsibility of local regional players like Iran and Saudi Arabia. But really, American foreign policy is about status quo. And it is also a lot about interest. It is about values. And that's why they support human rights activists and NGOs and give funding to humanitarian organizations and USAID and all of that.

But American foreign policy is also about access to resources, about selling weapons and protecting peace treaties between Israel and some of its Arab neighbors, and protecting Israel's security. So it's a bit too facile for American presidents to say, "Oh, well, there's nothing we can do about these authoritarians." There is a lot that they can do. And it's time to rethink the traditional approach to the Middle East, where it is believed that it's either stability with a dictator or chaos if we allow democratic forces to try to undo a system. It isn't this terrible binary choice. That's not the only choice we have. Look at how things are unfolding in Sudan. Look at Tunisia. I think these are great examples of what can happen when geopolitical interests don't stand in the way of democratic change in these countries.