Mexico continues to grapple with an intensifying coronavirus outbreak — and an economic beating. The country reopened its economy in June without controlling its first COVID-19 wave, and the consequences have become a cautionary tale about pitting the economy against public health.

Tourism is the top industry in the southern state of Oaxaca. Visitors from Mexico and worldwide flock to the Pacific Coast beaches and the state’s colonial capital and archaeological zones. Navigating economic survival while trying to minimize harm to public health is a fine line many in the battered tourism sector are having to walk.

With no international air restrictions, foreign travelers have recently taken advantage of enticing discounts. But COVID-19 is still killing tourism.

Normally, Oaxaca City’s central plaza would be full of tourists. But not now. Street vendors trying to eke out a living outnumber potential customers.

“Those of us who work in tourism were the first to be affected."

“Those of us who work in tourism were the first to be affected,” says travel agent Emmanuel Castellanos. He says many small businesses like his have had to shut down while bigger franchise operations survive. He’s been able to keep his office open thanks to loyal local clients and a sympathetic landlord. 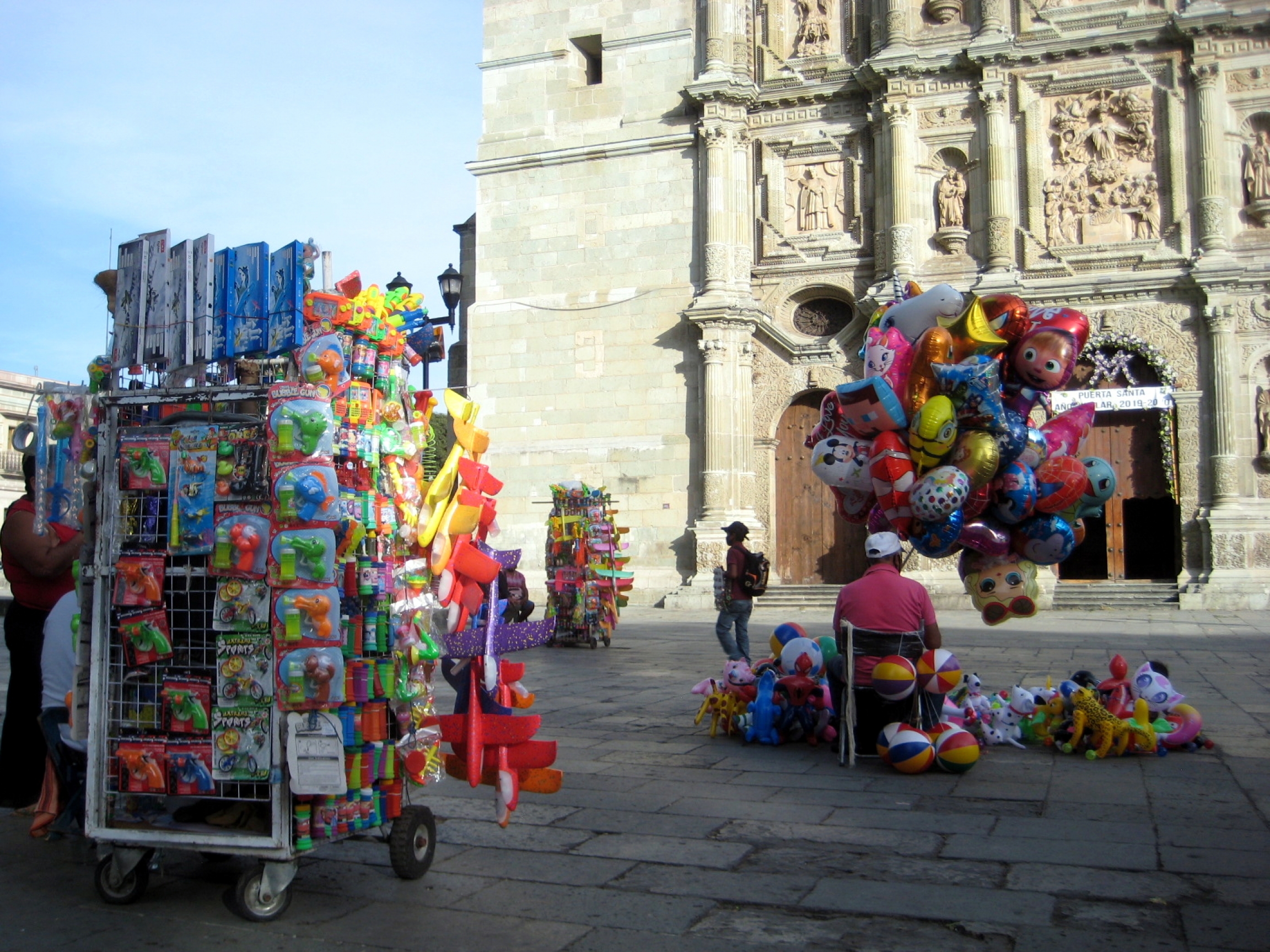 Vendors in front of Oaxaca's landmark cathedral have been outnumbering potential clients these days.

Government health officials have called on citizens to voluntarily stay home while tourism destinations are still open and offering enticing discounts. Nonessential travel is ill-advised, but not illegal.

Castellanos says many of his agency’s local clients are restless and anxious to travel. “We have to tell clients that it’s not advisable to travel right now,” he says. “But we also can’t prohibit them from doing so.” Instead, he warns them of the risks and urges them to act accordingly.

In Mexico, international tourism usually brings an upward of $20 billion a year. But 2020 might deliver less than half that amount. And this is despite Mexico keeping international air travel open, including US tourists barred from other countries due to soaring COVID-19 cases.

Unlike other travel destinations, travelers flying into Mexico do not have to prove they are virus-free to enter the country for non-essential travel.

Keith Whyte, an Irish tech consultant who flew into Mexico City from Europe recently, says he breezed through customs without having to present health documentation. Whyte filled out an electronic form that asks travelers to self-report COVID-19-like symptoms or recent contact with confirmed cases. And he came prepared with a QR code generated from the electronic form on his phone, but he says authorities never asked for it.

Still, Whyte says he’s careful to travel responsibly by minimizing contacts before travel, staying in one place and wearing a mask in public. But that’s not always the case with other foreign visitors — notably among the younger crowd. This can put hospitality workers at risk of infection.

“Many [of the young travelers] do show good manners when it comes to safety measures. ... But some of them have to be prompted to put on a face mask.” 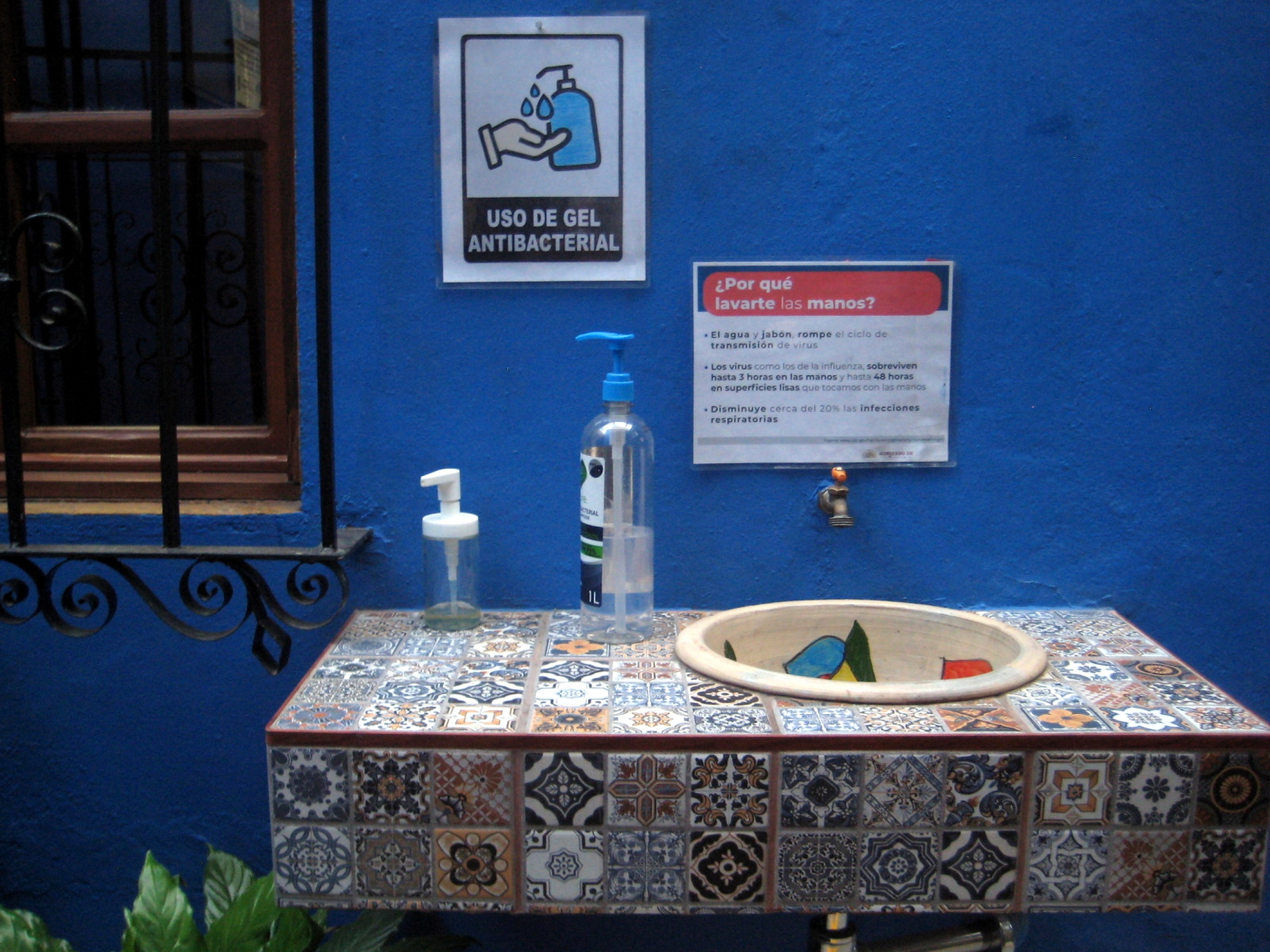 A hygiene station at the entrance of Las Golondrinas Hotel include a sink for hand-washing and a bottle with antibacterial gel.

“Many of them do show good manners when it comes to safety measures,” says hostel receptionist Giovanni Aragón Sosa. “But some of them have to be prompted to put on a face mask.” He adds that occupancy at the Las Americas Hostel where he works has hovered between 15-40% since reopening in June.

The drop in tourism has also hammered even well-established local businesses not directly tied to tourism.

“We’ve survived, but it’s been very hard. ... Our priority was to keep our staff employed and we’ve been able to accomplish that."

“We’ve survived, but it’s been very hard,” says Liliana Alejandra Ortiz, owner of the Xiguela Café in the picturesque and centuries-old Jalatlaco neighborhood. The restaurant is known for using locally grown ingredients and the drop in sales has meant less demand for local produce, which has impacted her suppliers.

In adapting to the scarcity of the “new normal,” Ortíz says she’s found support in regular customers and her landlady. “Our priority was to keep our staff employed and we’ve been able to accomplish that,” Ortíz says. The government could only provide nominal aid that helped cover a few basic expenses when the restaurant completely shut down in May.

A recent study found that more than 1 million small businesses in Mexico have permanently closed because of the pandemic and a whopping 94% haven’t received any form of direct government aid. Economic precarity is visible on the street; from informal vendors unable to work from home to buildings left vacant by bankrupt businesses.

“It’s like we’re turning over rocks looking for a way to survive,” says Sandra Martínez López, who helps to run the Las Golondrinas Hotel. The plant-filled complex of historic homes and interlinked patios has been around for 30 years but is now on the verge of bankruptcy.

“Despite having available space and beautiful gardens and good ventilation, we just don’t have any guests right now...People aren’t traveling and the economy is at a standstill.” 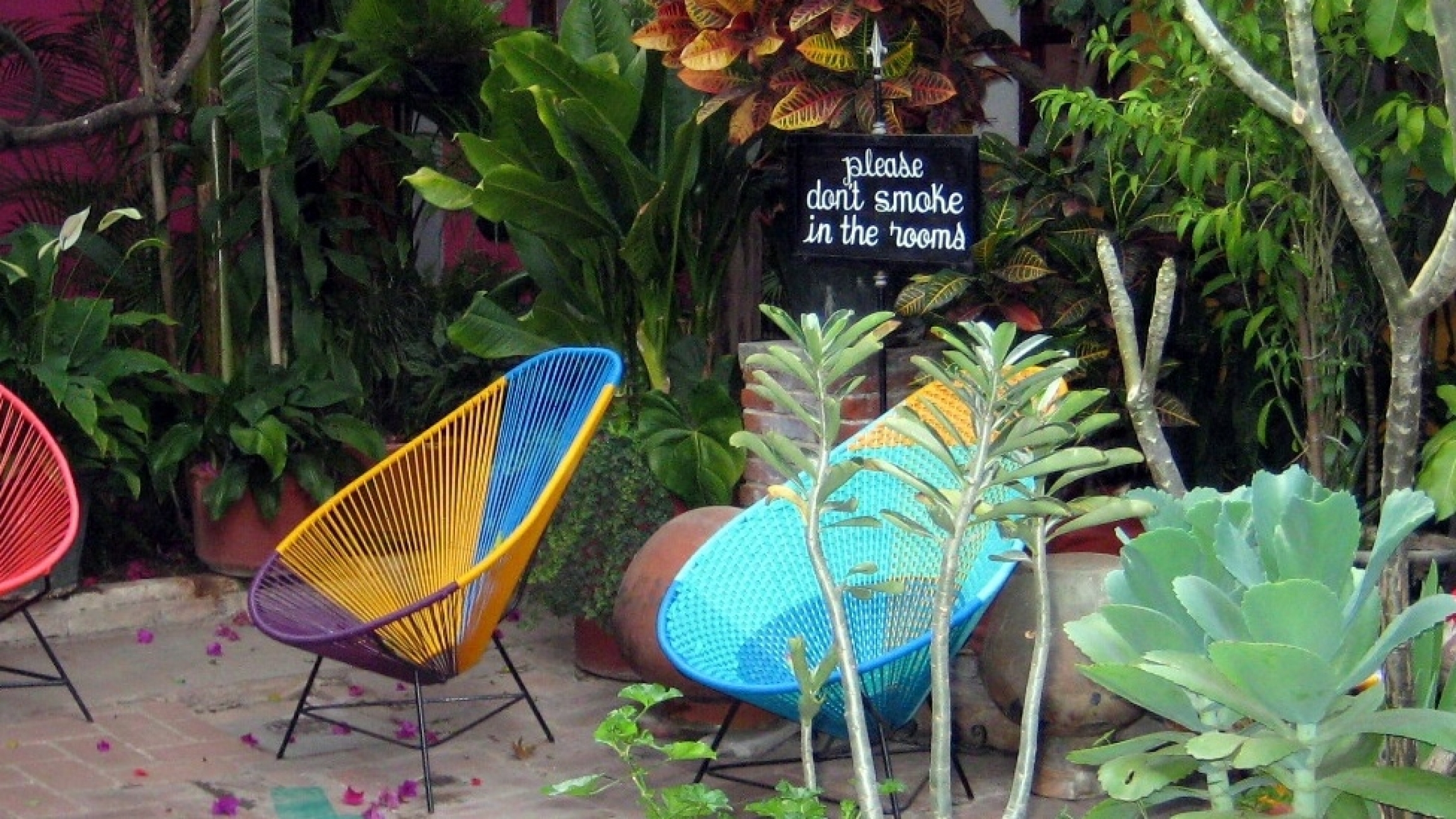 An empty patio at the Las Golondrina hostel in Oaxaca, Mexico.

Martínez says loans from friends and longtime repeat customers have helped pay the bills, but it’s unclear how much longer they can stay afloat. She added that government aid programs to hotels have certain thresholds that simply don’t allow smaller operations like the Las Golondrinas Hotel to qualify.

A United Nations analysis found Mexico is the only country in Latin America and the Caribbean that hasn’t set up a cash stimulus program in response to the pandemic. Mexican President Andrés Manuel López Obrador preaches austerity, but economists warn cutting corners during an emergency of this magnitude will only create deeper problems for years to come. 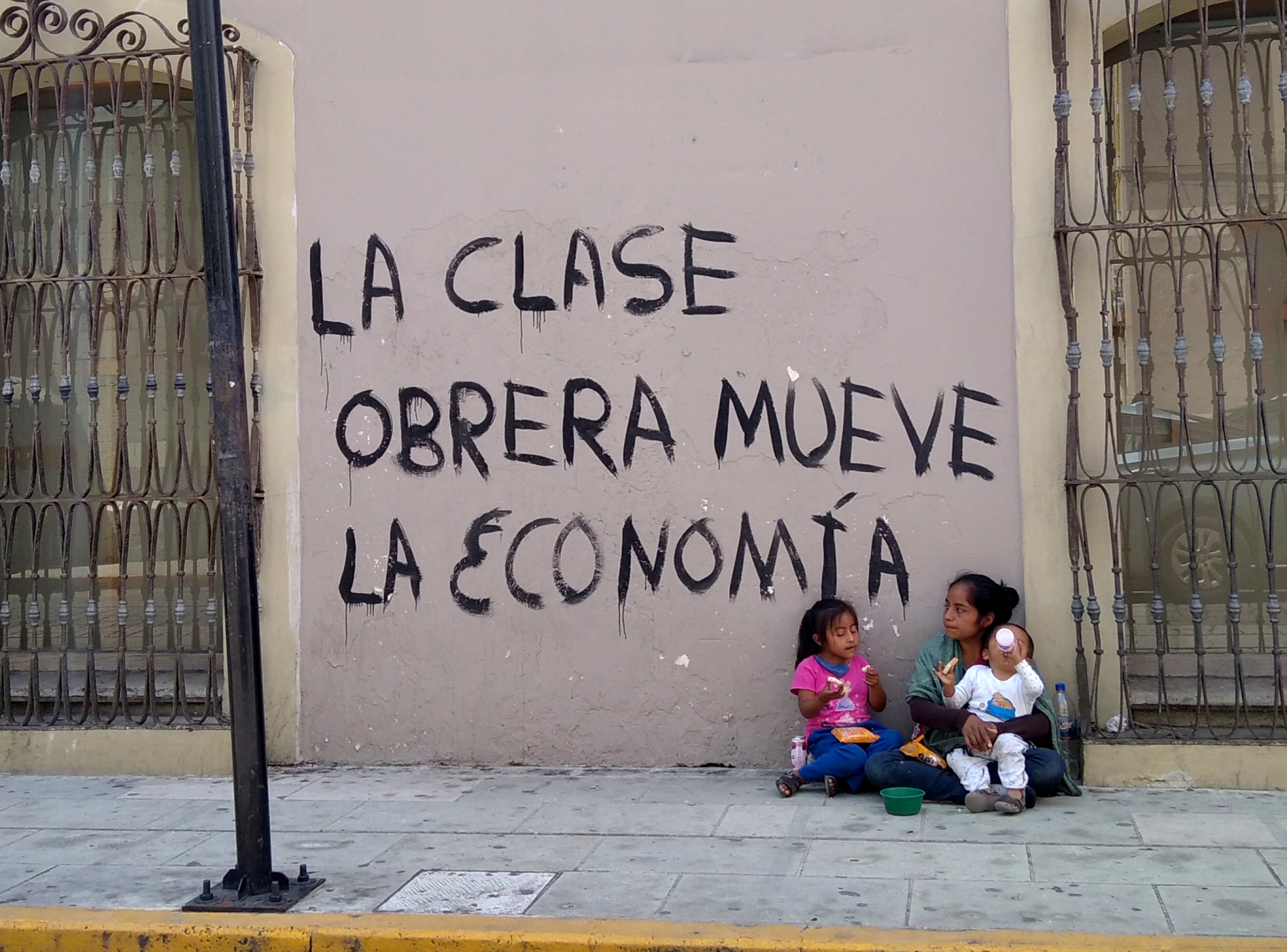 A woman with children asks passersby in downtown Oaxaca for spare change next to a wall painted with a slogan that reads "The working class moves the economy."