Leila Bouazizi was mindlessly scrolling through her phone while on the metro the other day in Montreal, Canada, when a picture popped up on Facebook.

It was the image she has seen posted all over social media, news outlets, and posters and banners for the past decade. A picture of her brother, Mohamed Bouazizi, a fruit vendor whose solo protest changed the trajectory of the entire region.

Mohamed Bouazizi and his family used to live a quiet life in the town of Sidi Bouzid, in central Tunisia.

In December 2010, however, the family was suddenly thrust into the global spotlight after Mohamed Bouazizi set himself on fire in front of the city hall. It was an act of frustration over mistreatment by local officials, and he died a few weeks later at age 26. 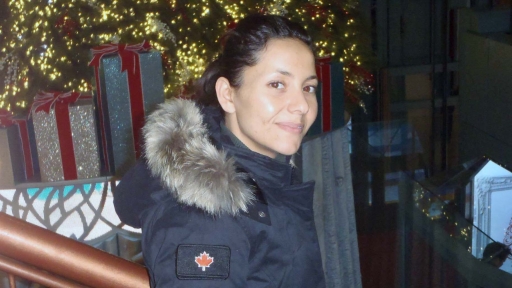 Leila Bouazizi, the sister of Mohamed Bouazizi, moved to Montreal, Canada shortly after her brother's 2011 death and the Tunisian revolution.

When the news of his protest spread, it spurred protests across the country and beyond, leading to what became known as the Arab Spring or Arab uprisings. Mohamed Bouazizi’s death and subsequent protests in Tunisia set off similar uprisings in several countries in the Middle East that toppled dictators and led to multiple, ongoing conflicts.

A decade on, Leila Bouazizi says the pain of losing her brother hasn’t subsided.

Mohamed Bouazizi was a simple man, his sister said in an interview with The World.

The siblings’ father passed away from a heart attack when they were young, Leila Bouazizi said, so Mohamed Bouazizi had to start working at a young age. Their mom worked at a farm making about $2 per day.

Mohamed Bouazizi used to get up at 3 a.m. to fill up his cart with fresh fruit and station himself in front of the city hall to sell them. His job helped support the family.

He sold bananas, strawberries, grapes — whatever was in season.

After a municipal worker confiscated his weight scale, Mohamed Bouazizi got his hands on some gasoline and set himself on fire. Witnesses captured the aftermath on their cell phones and the videos spread online.

Shortly after Mohamed Bouazizi’s self-immolation, protests erupted in Tunisia. People called for better living conditions, jobs and dignity. And just before he died, the country’s longtime president, Zine al-Abidine Ben Ali, visited Mohamed Bouazizi in the hospital as a gesture to quell the growing protests.

Overnight, the unknown fruit seller became a national symbol of pro-democracy protests in Tunisia. People held up his picture at protests. Banners went up on the city walls declaring him a martyr.

Overnight, the unknown fruit seller became a national symbol of pro-democracy protests in Tunisia. People held up his picture at protests. Banners went up on the city walls declaring him a martyr.

The country was in a state of upheaval.

“People were tired of the dictatorship,” Leila Bouazizi said. “They were tired of oppression, poverty and mismanagement. That’s why they reacted so strongly.”

Protesters demanded that Ben Ali step down. And so, on Jan. 14, he resigned and left for Saudi Arabia with his wife and children. Soon, the protests in Tunisia inspired others in the region.

A region on fire

The protests challenged Arab governments and brought down leaders in Egypt, Libya and Yemen. In Syria, they led to a civil war.

Lina Khatib, director for the Middle East and North Africa program at Chatham House, said each country had its own unique political circumstances and protesters had different demands. But there were some common themes.

“There’s only so much that any citizen is going to put up with when it comes to oppression and autocracy,” she said. “Their socioeconomic conditions had severely deteriorated, freedom of expression was in many places nonexistent or severely curtailed and people generally wanted social justice and dignity.”

Leila Bouazizi said over the past decade, her family has received a lot of support — but they have also been targeted and harassed.

Leila Bouazizi, her husband and her mother moved to Canada a few years after Tunisia’s revolution. They now live in Montreal, and Leila Bouazizi works for a company that makes airplane parts.

Her younger sister, Samia Bouazizi, remains in Tunisia. She has applied to move to Canada but her application has been rejected, Leila Bouazizi said.

On the 10-year anniversary of her brother’s death, Leila Bouazizi and her family were half a world away.

“If we were Tunisia, we would have paid our respects at Mohamed’s grave,” Leila said a few days ago.

“One day, I hope all Tunisians live in dignity,” she said. “That’s what my brother wished for.”