Activist and former Google executive Wael Ghonim once said, “If you want to liberate a society all you need is the internet.”

“I said those words back in 2011, when a Facebook page I anonymously created helped spark the Egyptian revolution,” he explained retrospectively during a 2016 TED talk.

From Egypt to Libya, social media helped facilitate uprisings in the Middle East and North Africa, but not without its challenges — including widespread misinformation, hate speech, language translation mishaps and targeted surveillance.

Ghonim decided to create the Facebook page in 2010, after seeing another post on Facebook: a photo of a young Egyptian businessman, beaten to death by police after trying to expose police corruption. His name was Khaled Said.

“I could not sleep that night and decided to do something. I anonymously created a Facebook page and called it, ‘We are All Khaled Said,'” Ghonim said during the talk.

The page grew quickly and became the most-followed in the Arab world. Hundreds of thousands of people gathered there to crowdsource ideas and share news that the Hosni Mubarak regime wouldn’t allow on traditional media.

Related: Arab uprisings began with quest for freedom and led to repression, wars

“I saw a spark of hope,” Ghonim said. He used his Facebook page to call for “a revolution against corruption, injustice and dictatorship.”

On Jan. 25, Egyptians flooded the streets of Cairo and other cities demanding change. The government shut down the internet and tried to stop them. But the pro-democracy protesters didn’t give up.

Within 18 days, Egyptian President Hosni Murabak stepped down. As thousands danced and celebrated in the streets of Egypt, Ghonim phoned CNN.

As protests erupted in other countries like Libya, people in the diaspora tried to help using online tools.

“We wanted to participate using social media and the internet,” said Ayat Mneina, a Libyan Canadian activist who was based in Winnipeg in 2011, during an interview with The World.

In 2011, Mneina and a friend created the Twitter account Shabab Libya and a matching Facebook page for the Libyan Youth Movement. They gathered information from a network of sources on the ground in Libya, and distributed news and information about protests through their social media feeds. Yet Mneina said there were challenges from the very beginning.

“We constantly had to block people. There was a lot of pro-regime propaganda that was following us everywhere,” she said.

One night, their pages were suddenly swarmed by thousands of new followers from Serbia.

“They were all pro-Gaddafi. And they flooded all of our comments. They posted so many pro-regime things and...attacked all of our information,” she said.

"They were all pro-Gaddafi. And they flooded all of our comments. They posted so many pro-regime things."

Mneina enlisted volunteers. They blocked people who spammed their pages. But fake accounts kept popping up and gaining huge followings.

“They would...stoke the fire and say things that they knew that would get people on different sides of the conflict really riled up,” she said.

What Mneina described may sound familiar today. Governments, regimes, and people all over the world have weaponized social media to launch coordinated propaganda and harassment campaigns and to surveil people. But at that time, it was a new phenomenon. And then the tactics got worse.

“Online, it got so bad. And so out of control,” one Libyan activist who was organizing protests in Benghazi during the Libyan revolution told The World. The activist asked to remain anonymous because he fears for his safety. Today he lives in Canada.

He said Libyan social media was a hotbed of misinformation and hatred back when the Libyan revolution first erupted — and now.

“There [are] no words to describe how angry I am at Facebook and Twitter. The hate, the racism, the things they allow. The violence,” he said.

Social media platforms, he alleged, lack the cultural context, the political knowledge and the language skills to deal with not just the Libyan market but most content in the Arabic language.

In a statement to The World, Twitter said: "As a uniquely open service, Twitter provides a platform for activists and movements around the world to be heard — empowering people to have a voice on issues that matter most to them.”

“We put people first at every step and are committed to making Twitter a safer place,” the statement continued. “The Twitter rules are uniform across the globe and we have always used a combination of machine learning and human review.”

“We have strong and dedicated teams of specialists who provide 24/7 global coverage in multiple different languages, and we are building more capacity to address increasingly complex issues,” the company said. “We continue working to improve and evolve our policies, products and processes and invest in technological solutions to build a healthier Twitter." 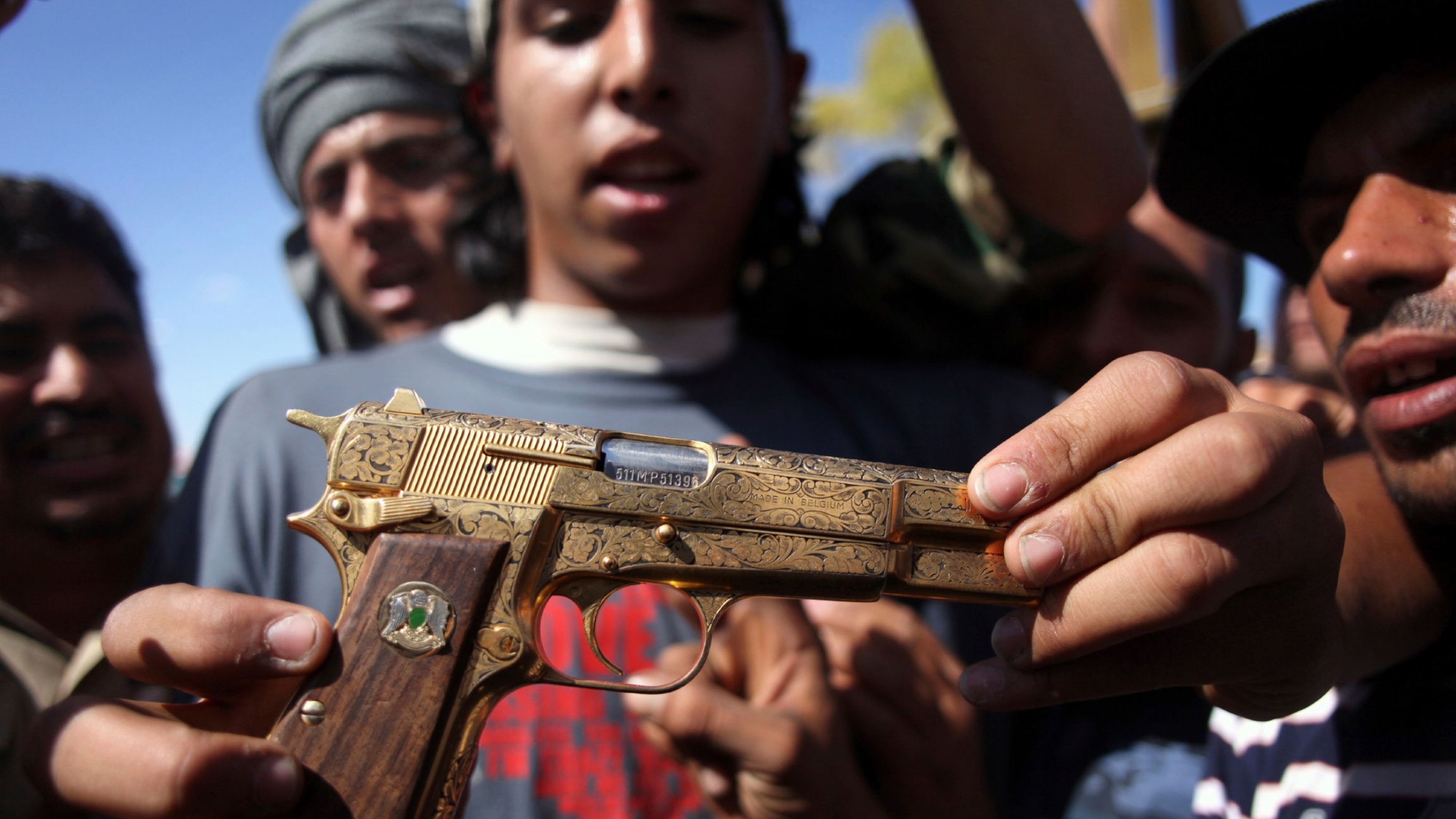 In this Oct. 20, 2011, file photo, Mohammed al-Babi holds a golden pistol he says belonged to Muammar Gadhafi in Sirte, Libya.

He also said he detests the idea that the Arab uprisings were fueled by social media. That might be a comforting narrative for the West, he said, but it’s not true. And it gives head honchos in Silicon Valley credit for what people like him did.

Libya did dissolve into civil war after the Muammar Gaddafi regime crumbled. Different factions weaponized social media to vie for power, hunt down opponents and stoke divisions along ethnic lines.

It happened elsewhere, too: people in Myanmar, inspired by the uprisings in Tunisia and Egypt, tried to use social media to organize. But hate-filled posts and propaganda against the Rohingya ethnic and religious minority helped incite a genocide.

Facebook has since said it’s investing more in people and technology to curb hate speech in non-English-language countries such as Myanmar, and working with civil society organizations on the ground to identify accounts that repeatedly produce problematic content. But many, including the activist from Libya, say it’s not enough.

Wael Ghonim, the activist who started the Facebook page in Egypt, has come around on this as well.

“The hardest part for me was seeing the tool that brought us together tearing us apart,” he told FRONTLINE in 2018, adding that social media quickly became a source of polarization and harassment in Egypt, too.

“I don’t like admitting how naive I was, thinking that these are liberating tools,” he said.

In the years since 2011, he said he’s realized social media platforms enable and even reward bad behavior — sensational and divisive content. With so little accountability, these tools are more likely to be used for bad than for good.