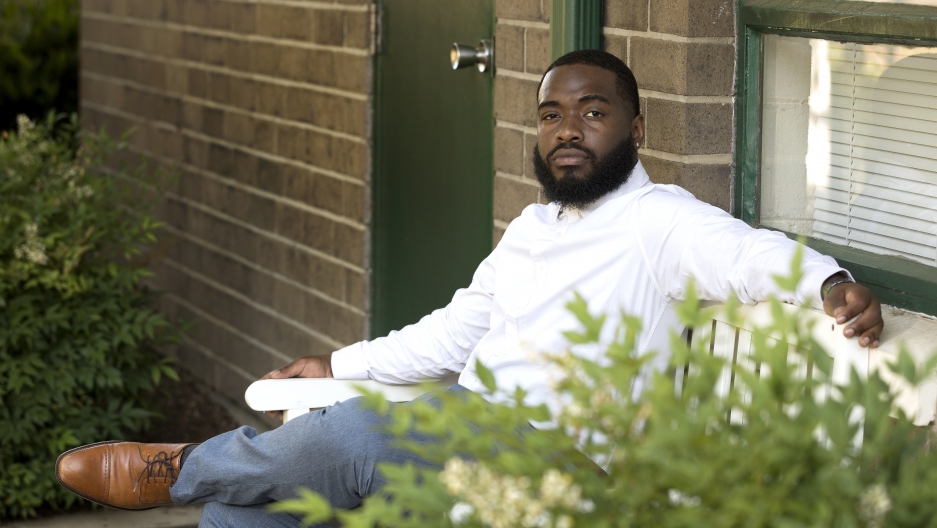 Brayan Guevara, 20, identifies as Afro Latino and his family comes from Honduras.

In the midst of a year fraught with racial injustice and an ongoing pandemic, there has been a glimmer of hope for Brayan Guevara and his mother, Nodia Mena: Joe Biden is now President-elect.

“I feel really good,” Guevara said of Biden’s win. “He's in there for all of the reasons that I want him to be in there for. He's the person that has the best team, in my eyes.”

Guevara is a 20-year-old Afro Latino college student and teacher's assistant at an elementary school. For the past year, he’s been sharing his stories of identity and politics with The World while preparing to vote for the first time.

Related: This young Afro Latino teacher and voter wants to be a model for his students

“It wasn't until my junior year in high school when I realized I should be adding the Afro part to my Latino,” he said earlier this year of his Afro Latino identity. “When I was a kid, I was ignorant. I really didn't know that much.”

He was undecided on who to vote for all year. He considered himself an independent voter. However, when Biden chose Senator Kamala Harris as his running mate, Guevara was sold — especially because Harris is a woman of color.

“That really just put a ‘wow’ in my face — first Black woman vice president. Well, I got my little intuition that she's going to make things shake and try and succeed to make the world or the United States a better place.”

“That really just put a ‘wow’ in my face — first Black woman vice president,” he said. “Well, I got my little intuition that she's going to make things shake and try and succeed to make the world or the United States a better place.”

Guevara is in college studying to become a teacher. It was easy for him to agree with Biden’s plan for educators and teachers that would increase teachers’ salaries and help them pay off their student loans.

He comes from a family of educators: His grandparents were teachers in Honduras, and his mother, Nodia Mena, is a Spanish-language instructor for the University of North Carolina at Greensboro.

Mena is also happy with the election results. She said she wishes she could discuss politics with her students during class, but she had to stick to her lesson plan.

“Politics affects a lot in school, in their education, because whoever is elected to represent that office can affect, for a lot of students, access or the lack of access to educational resources,” she said.

Related: We followed eight young first-time Latino voters all year. Here's how they view the 2020 election.

Mena and Guevara are Afro Honduran. Mena’s first time voting in an election was as an 18-year-old in Honduras about 30 years ago. She said that she didn’t think her vote mattered at the time because she was a Garifuna woman. She then voted for the candidate least likely to win.

The Garifuna people are descendants of an Afro Indigenous population from the Caribbean island of St. Vincent. They were then exiled to Honduras, and many moved to Belize, too.

But three decades later, as a voter in the US, Mena said she feels her vote does matter. She voted for Biden this year, though incumbent President Donald Trump ultimately won North Carolina.

“I am glad that the number of people who came out to vote showed that we really wanted a change in whatever is going on right now,” she said. “I cannot say that it didn't matter here, just because he didn't win here in North Carolina. But I see in other places how it did matter.”

“I don't think my vote counted because of where I’m placed in the United States, but I think my voice matters,” he said.

As for Guevara’s future, he’s working toward building his teaching career. In January, he’ll transfer from community college to the University of North Carolina at Greensboro.