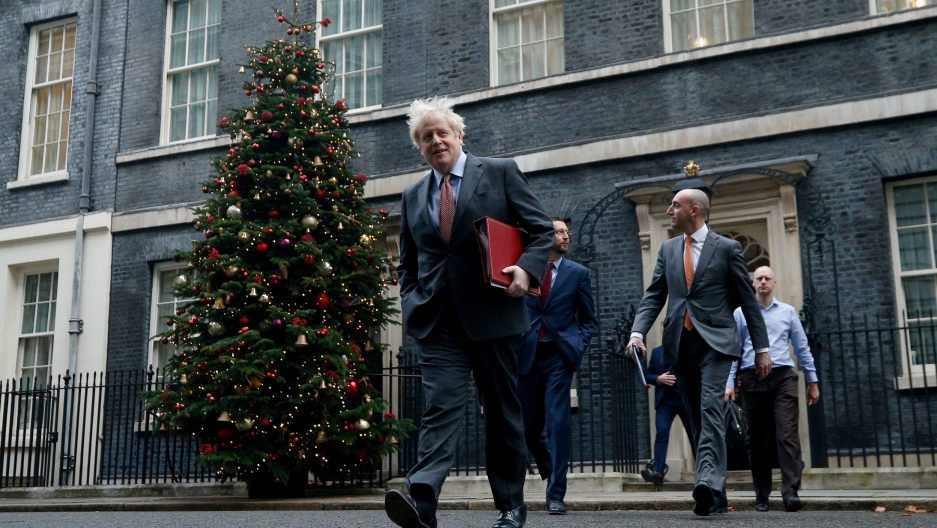 Britain and the European Union leaders are in a final push over a Brexit deal, as the two sides are expected to meet in the next day after warning that the chances of a post-Brexit trade deal by a year-end deadline is slipping away.

Johnson's office confirmed the two leaders would hold a dinner meeting on Wednesday.

Britain is due to leave the EU's economic structures on Jan, 1, a rupture that could cause upheaval for businesses on both sides of the English Channel if there is no trade agreement.

But both sides downplayed the chances of a breakthrough.

Johnson said "the situation at the moment is very tricky."

"But hope springs eternal. I will do my best to sort it out if we can," he said.

The UK left the EU on Jan. 31 after 47 years of membership, but remains within the bloc's tariff-free single market and customs union until the end of the year. Reaching a trade deal by then would ensure there are no tariffs and quotas on trade in goods on Jan. 1, although there would still be new costs and red tape for businesses.

Failure to secure a trade deal would mean tariffs and other barriers that would hurt both sides, although most economists think the British economy would take a greater hit because the UK does almost half of its trade with the bloc.

There was a breakthrough in one area, as the two sides announced they had reached agreement on how trade will work with Northern Ireland, the only part of the UK that shares a land border with the EU.

The Brexit divorce agreement struck by the two sides last year contains specific provisions for Northern Ireland to ensure there are no customs checks or other trade barriers along the border with EU member state Ireland.

Not all the details were hammered out before the UK left the bloc in January, and as trade talks foundered the British government introduced legislation in September giving itself powers to breach the legally binding withdrawal agreement.

Britain claimed its Internal Market Bill was needed as an "insurance policy" to protect the flow of goods within the UK in the event of a no-deal Brexit. But the move infuriated the EU, which saw it as an act of bad faith that could imperil Northern Ireland's peace settlement.

On Tuesday, British Cabinet Minister Michael Gove and European Commission Vice President Maros Sefcovic said they had reached an agreement on how trade to and from Northern Ireland would work, whether or not there is an overarching UK-EU trade deal.

Britain said as a result it would scrap its law-breaking measures, and Sefcovic said he hoped the accord would "create a positive momentum for the free trade agreement."

The two leaders said they planned to discuss the remaining differences face to face "in Brussels in the coming days."

The leaders of the EU's 27 nations are holding a two-day summit in Brussels starting Thursday and are not keen for it to be overshadowed by Brexit.

EU officials suggested negotiations could continue past Jan. 1, even as the two sides tumbled into a no-deal trading relationship. But the UK insists the talks must finish this year.

While both sides want a deal, they have fundamentally different views of what it entails. The EU fears Britain will slash social and environmental standards and pump state money into UK industries, becoming a low-regulation economic rival on the bloc's doorstep — hence the demand for strict "level playing field" guarantees in exchange for access to its markets.

The UK government sees Brexit as about sovereignty and "taking back control" of the country's laws, borders and waters. It claims the EU is making demands it has not placed on other countries and is trying to bind Britain to the bloc's rules indefinitely.

With both sides seemingly entrenched in their positions, it was unclear what Johnson's trip to Brussels could achieve.

Fabian Zuleeg, chief executive of the European Policy Centre, said it was a piece of political theater.

"But what we don't know is whether it is positive theater or negative theater," he said. "Is it coming to Brussels and then claiming to have hard won a deal maybe with some symbolism around that? … Or the other option is he comes here to make the political point that no agreement is possible.

"At this moment, we simply don't know which theater Boris Johnson is going to play."

By Jill Lawless and Lorne Cook/AP