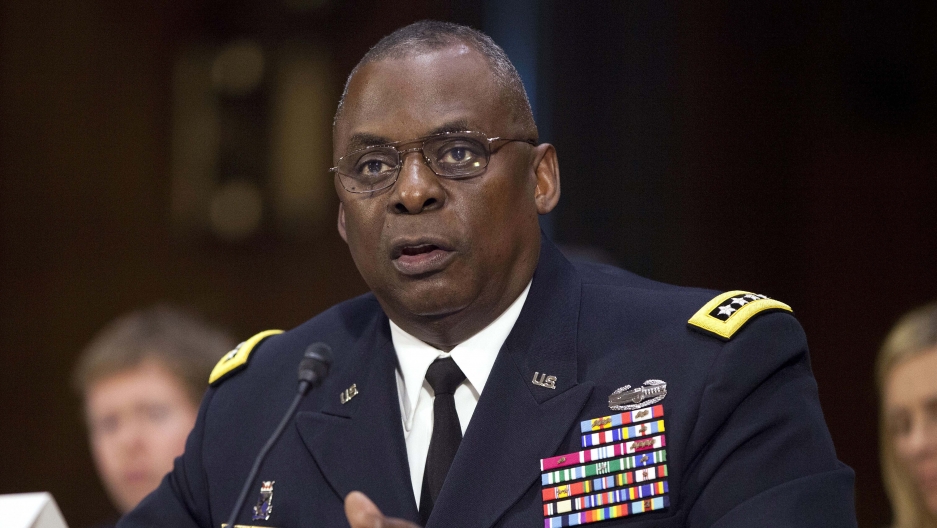 In this Sept. 16, 2015, photo, US Central Command Commander Gen. Lloyd Austin III testifies on Capitol Hill in Washington, DC. Biden will nominate the retired four-star Army general to be secretary of defense.

Austin has served in some of the highest-ranking positions in the US military, including overseeing US operations in the Middle East from 2013 to 2016.

Biden’s pick is important for other reasons, too, Stavridis told The World: “I think it's significant, principally because today the US military is about 40% minorities. It is a very multiracial institution.”

Austin’s confirmation may face challenges getting through Congress: He has not been out of the military for the seven years required to become secretary of defense and may need a waiver from Congress in order to take the job. And some national security experts expressed concerns about the balance of civilian-military power if the Pentagon is led by a retired general.

For another perspective on Austin, The World’s host Marco Werman spoke to Rosa Brooks, the co-founder of the Leadership Council for Women in National Security and author of "How Everything Became War and the Military Became Everything."

Related: Biden pick to lead US mission at the UN will 'rebuild ties with our closest allies,' says retired US amb.

But I think it's a mistake for Biden to choose a general who is so recently retired that he is barred by congressional statute from serving. There's a law that requires retired military officers to have been out of the military for seven years before they're eligible to serve as secretary of defense. And that law does have a provision for a waiver. And the last person who received a waiver was Gen. James Mattis under Trump in 2017. But this would be the second waiver in four years and only the third waiver in history. Despite his personal qualities, this sends the wrong message in terms of civil-military balance.

So, what is the rationale behind that seven-year pause law? And why do you argue that civilian leadership is so important at the Defense Department?

The purpose of this seven-year, cooling-off period that Congress required was to say, "OK, military leaders have incredible skills. Go out in the civilian world, shake off some of the ingrained habits, learn the civilian culture. After seven years, then you can go back in and you make a great secretary of defense." But as a general rule, putting someone in when they have not completed that cooling-off period risks messing up the civil-military balance. And I think right now, really the civilian side of the Defense Department has just been decimated under Trump. And I think this would be a moment, if there's ever a moment, to try to restore some balance rather than go with another retired general.

Many people have been betting on Michèle Flournoy, an undersecretary of defense for policy in the Obama administration, to head the Department of Defense under Biden. You worked for Flournoy for several years. What would she have brought to the position?

Part of the reason that I and so many others would have liked to see Michèle Flournoy in the job is that she is someone who's just universally respected and really almost beloved — I think that would not be an exaggeration — in the national security community.

She has been a major intellectual leader. She's been a mentor to a generation of women and men in the national security community. She's been, in a sense, understudying for this job for years. Obviously, it's fantastic to see the first Black secretary of defense. It would also have been fantastic to have the first female secretary of defense to a federal agency that until, literally just a few years ago, had legal discrimination on the basis of sex. That would also have been a really important symbolic move, I think, to choose a woman like Michèle Flournoy, who is so fantastically qualified.

I mean, a lot of people have made the argument that a woman at the head of the Pentagon is long overdue. What difference would gender make, do you think, in this particular department?

This is a department that, unlike any other in the federal government, has been permitted to lawfully discriminate on the basis of sex until just a few years ago. For a long time, the number of women in the military was capped. After the 2% cap was lifted, it took until 2008 to get the first female four-star general. Even as we began to see significant advances in terms of racial diversity in the military, women's success really lagged behind. And it was only in 2015 that the so-called "combat exclusion rule," which prohibited women from serving in the combat roles that traditionally are the ones viewed as preparation for top both military and civilian leadership in DOD. It's only 2015 that that rule was lifted.

I mean, in the US military, gender equality and racial equality have both been elusive for years. As to the racial component here, Gen. Austin's nomination must send an important message to service members of color, especially in the lower ranks.

Oh, that's absolutely true. And it's incredibly important and meaningful to have the first African American secretary of defense. Critics, including myself, have noted that there are other candidates who are on the shortlist, including people like Jeh Johnson, the Department of Defense's former general counsel and the former secretary of Homeland Security under Obama. If Johnson had been appointed, he also would have been the first African American secretary of defense, and he would not have required a congressional waiver. So, I don't think we should be thinking about this as, "Oh, well, this important norm of civil-military relations had to be tossed aside so we could break this barrier." It didn't have to be tossed aside. And I think it's really important right now to be saying really clearly to the Biden team, you didn't have to do this. This was not a good move. He's a great guy. You could have waited. It's only about 2 1/2 years for him to have done the cooling-off period. You could be your second secretary of defense.