Darby Wells is a village a little over 30 miles north of the Arizona-Mexico border. Nobody lives there anymore.

Lorraine Marquez Eiler’s one of about 100 Hia C-ed O’odham tribal members who once did. She’s in her 80s now. Her family and many others left decades ago when they were no longer able to find transportation to school a few miles away in Ajo.

But Eiler can still make out an indent in the ground where her dad used to mix mud and grass to make adobe for homes.

“That’s where he made his adobe,” she said. “But now, what I see is a bunch of trucks. I believe they’re construction workers. Probably heading for the border.”

Eiler has gotten used to hearing new sounds in the old village because there’s a different kind of work going on there now. For the last year, construction workers have passed by Darby Wells en route to the border to build the Trump administration’s 30-foot, steel bollard wall. President-elect Joe Biden has vowed to stop the wall’s construction, but there are still big questions about how his administration will treat this land.

“You can hear now, you can hear the plane in the background and you can also hear the beep-beep from the big dump trucks.”

“You can hear now, you can hear the plane in the background and you can also hear the beep-beep from the big dump trucks,” she said. 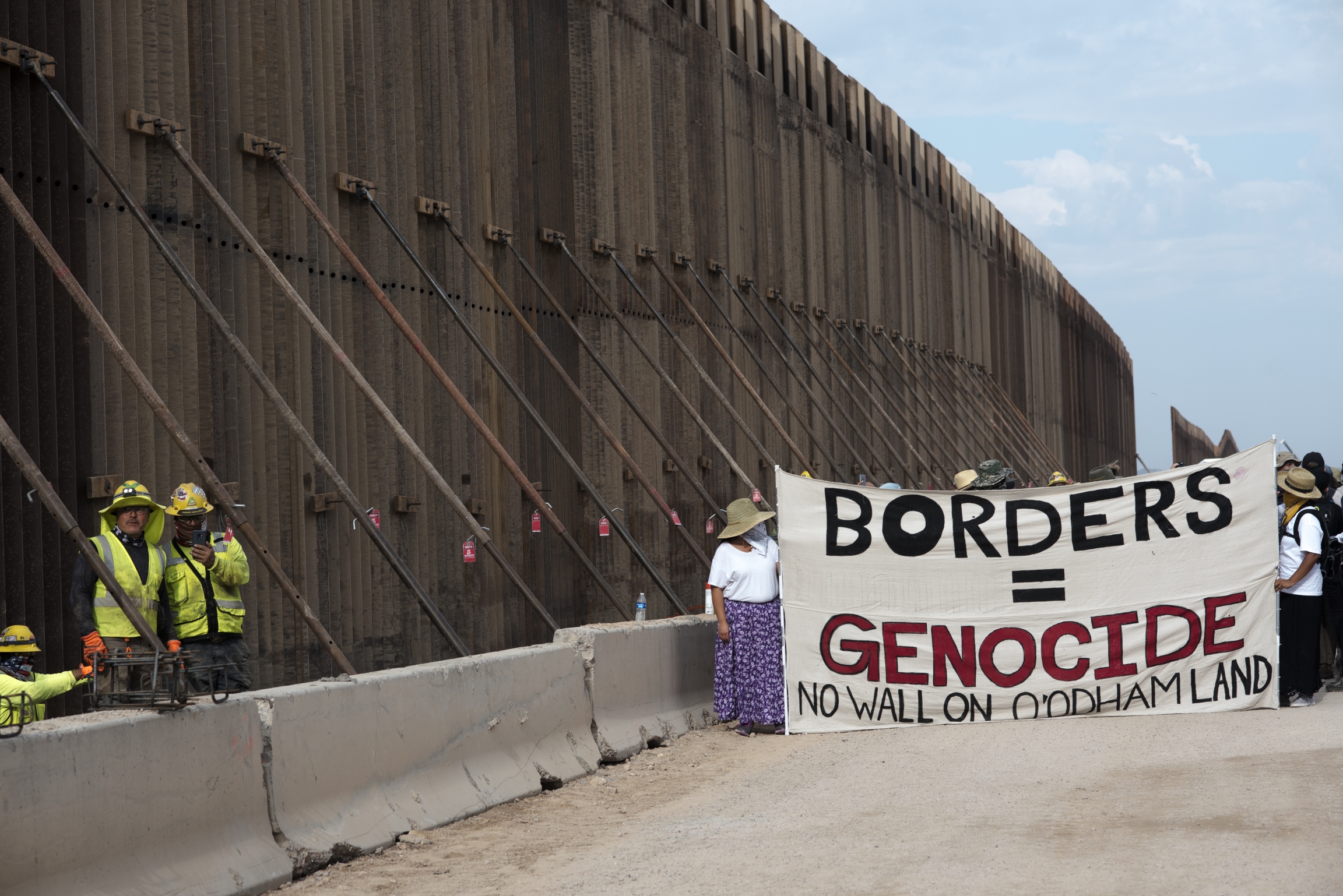 Protesters say they will hold President-elect Joe Biden to account on his promise to stop the Trump administration's border wall construction.

Eiler said these days, her old village is surrounded by land owned by different agencies. Aircraft like the one flying over her head come from the Barry M. Goldwater range nearby. Darby Wells itself is on Bureau of Land Management land.

And to the south and west, along the border, is Organ Pipe Cactus National Monument and the Cabeza Prieta National Wildlife Refuge.

Related: Why is Arizona trending blue? Ask Latinos, immigrants who live there.

O’odham tribes have ancestral land in the US and Mexico. But unlike related tribes, like the Tohono O’odham Nation east of Darby Wells, the Hia C-ed O’odham tribe that Eiler’s part of isn’t federally recognized. They don’t have a sovereign nation. There isn't a US-recognized Hia C-ed O'odham government that can protect the land.

Eiler was a teenager when she realized that. In fact, many people didn’t think her tribe even existed anymore. 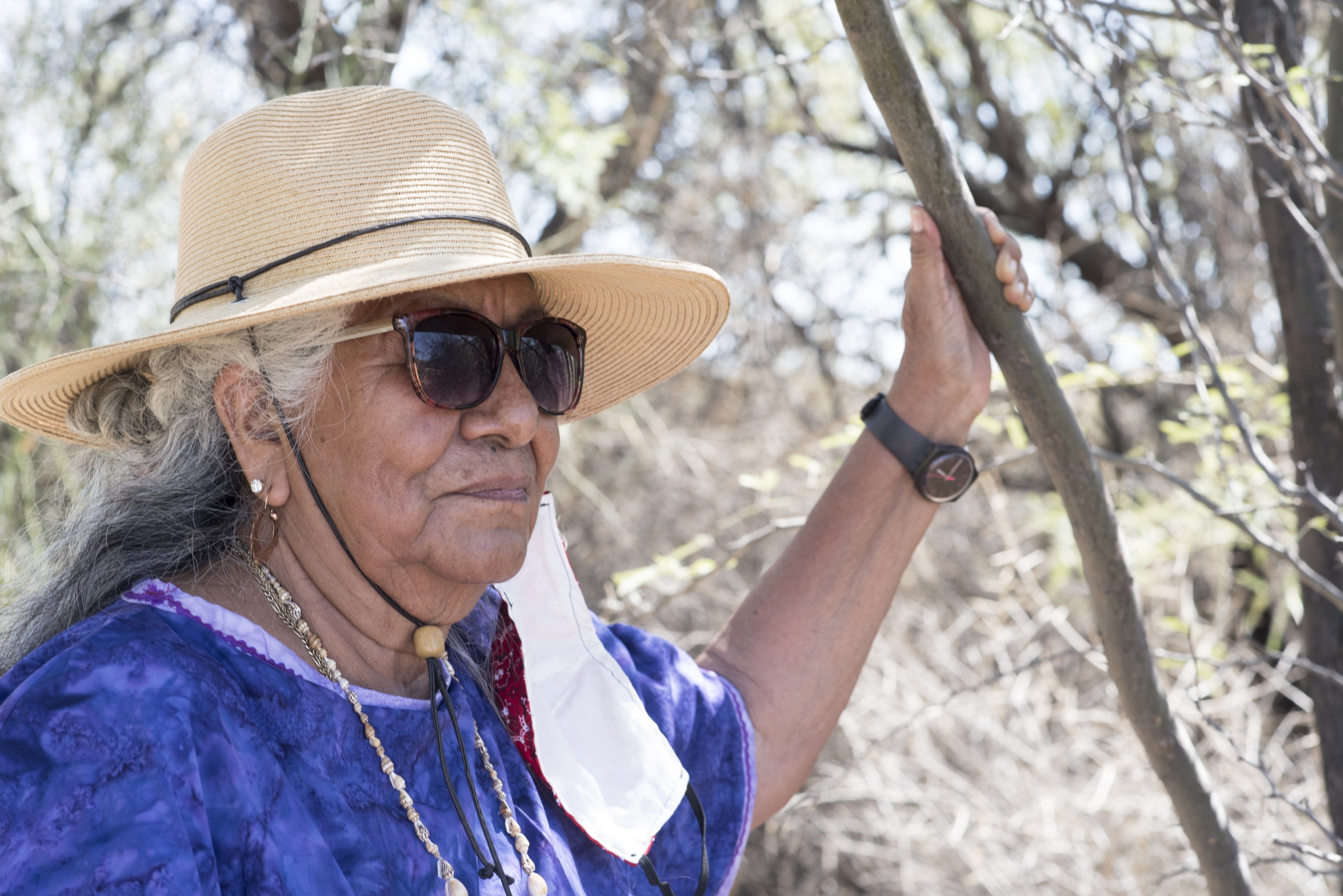 Lorraine Marquez Eiler’s one of about 100 Hia C-ed O'odham tribal members who once lived in Darby Wells, a village a little over 30 miles north of the Arizona-Mexico border. Nobody lives there anymore.

She’s worked to try and change that, teaching younger O’odham about their history.

The new border wall has threatened to erase that history once again. The Trump administration has waived dozens of environmental and cultural protection laws to push the project through.

“For us, this is no different than DHS building a 30-foot wall through Arlington Cemetery or through the grounds of the National Cathedral,” he said.

Despite his plea and months of protest from O’odham communities, wall construction presses on. 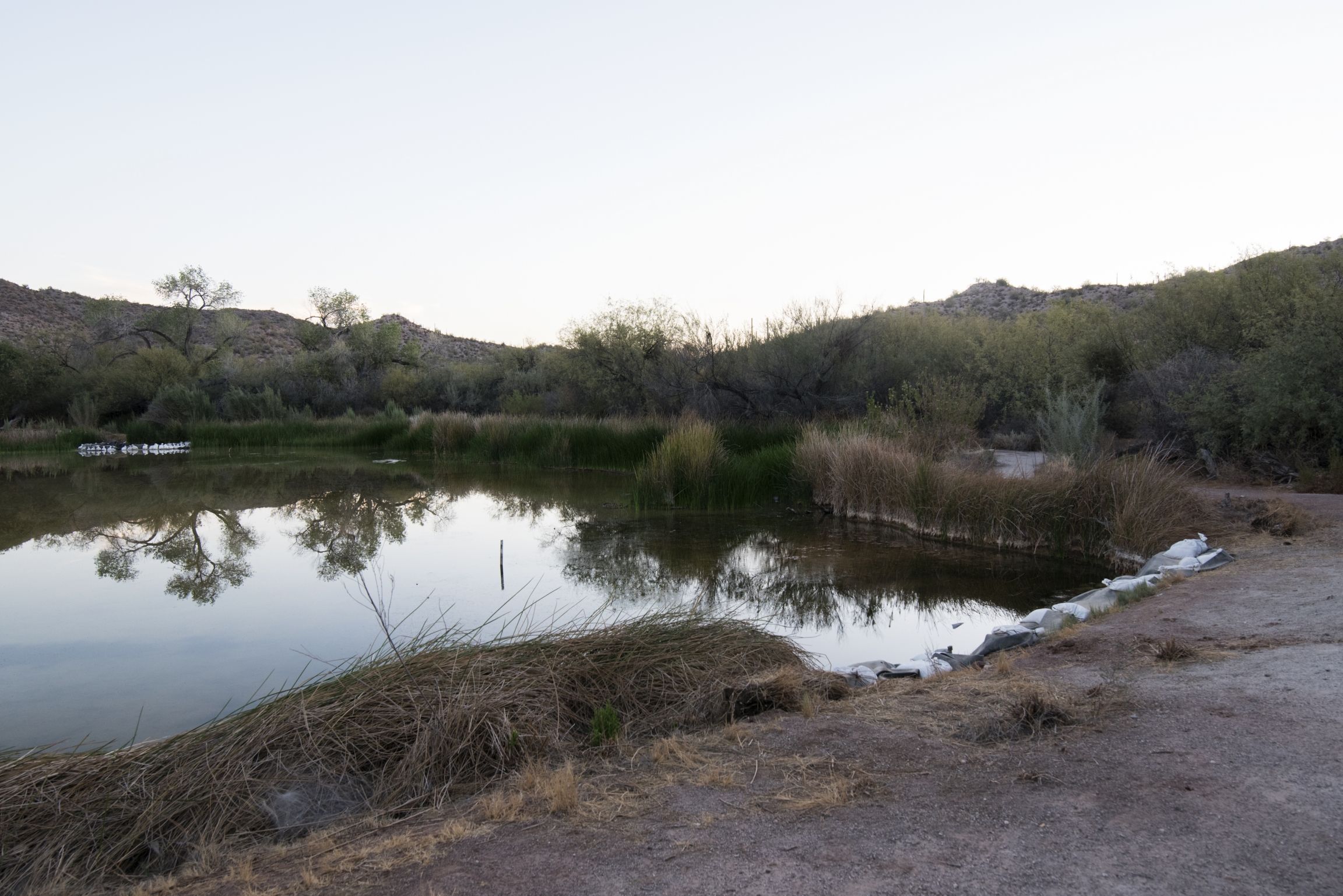 This past summer, towering steel barriers started going up across O’odham sites like Quitobaquito Springs, a desert water source and man-made pond that has been part of Hia C-ed O’odham communities long before Spanish colonialism.

This past summer, towering steel barriers started going up across O’odham sites like Quitobaquito Springs, a desert water source and man-made pond that has been part of Hia C-ed O’odham communities long before Spanish colonialism. Families lived there until the 1950s when it became part of Organ Pipe Cactus National Monument.

The pond’s water level dropped dangerously low this year and so did the spring flow. Tribal leaders and environmentalists say damage caused by long-term drought, agricultural pumping and leaks in the pond’s cement lining was exacerbated by the wall construction.

O’odham demonstrators were tear-gassed, shot with rubber bullets and arrested while protesting that construction. Park service officials closed the road to get to Quitobaquito in September citing safety concerns.

This month, a Customs and Border Protection spokesperson confirmed some 30 miles of border wall have already gone up in the park. Construction continues on lighting and other infrastructure.

Now people close to the borderland are asking — what will Biden do?

Related: Build the wall across the San Pedro River? Many say no.

On the campaign trail, he said no more money would go toward the wall. Environmentalists like Paulo Lopes, a staff attorney with the advocacy group Center for Biodiversity, are holding him to that.

“We and about 95 other groups signed a letter directed to the Biden/Harris transition team. Basically just asking that the new administration halt the border wall construction on Jan. 20.”

“We and about 95 other groups signed a letter directed to the Biden/Harris transition team. Basically just asking that the new administration halt the border wall construction on Jan. 20,” he said.

Norris signed onto the letter, along with several other tribal leaders.

Lopes said it’s not just about ending construction. It’s also about restoring the damage already caused by the wall. That includes places like Quitobaquito and the San Pedro River, Arizona’s last free-flowing river where a new border barrier went up this fall.

In all, by the time Trump leaves office, some 450 miles of new or rebuilt wall will be finished.

And some people are happy about that. Joe Celso’s ranch sits just near the border in Hereford, Arizona.

“I’m thrilled to death because we don’t have much peace where we live. Border Patrol is constantly in our property looking for these people who are coming across, helicopters flying over,” he said. “To us, this wall is a saving grace.”

Celso said US immigration policy is broken and migrants have been crossing through his property for years.

Still, he said he understands why wall construction angers Indigenous people on both sides of the border.

“I have compassion for people on the reservation that have been used to just walking across the border to visit relatives.”

That includes people like Matías Valenzuela-Estevan. He’s 28 and has dual citizenship in Mexico and the US. He grew up less than a mile from the border and is one of just a few thousand enrolled Tohono O’odham tribal members who still live in Mexico.

“It’s desert, there’s hardly any houses nearby. I guess you could say it’s kind of in the middle of nowhere.”

Estevan and his siblings used to duck under a barbed-wire fence along the border every day to go to school in Arizona. Then, they’d return to the small Tohono O’odham community of Wo’osan, or El Bajío, where they lived. 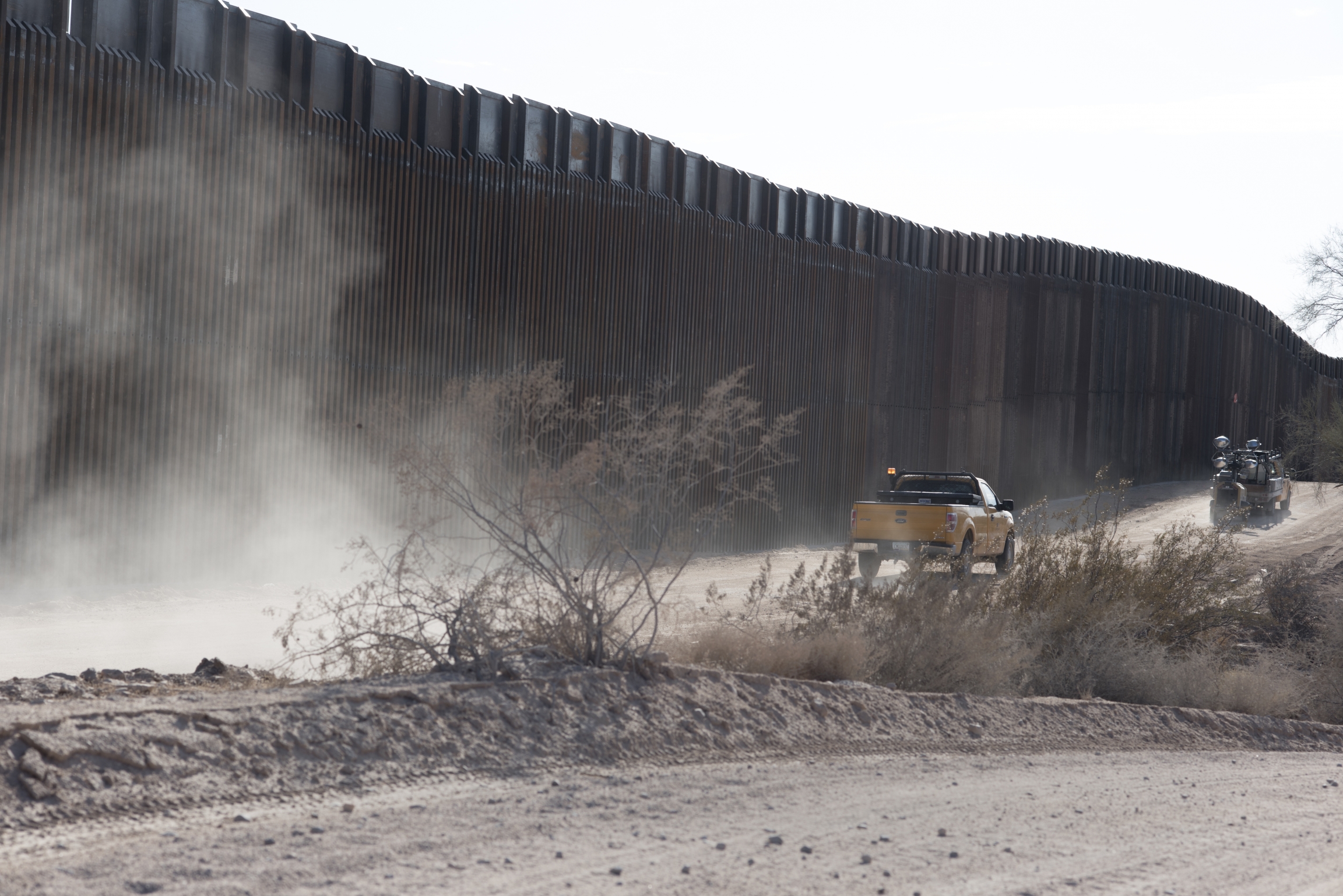 The Trump administration has waived dozens of environmental and cultural protection laws to push the US border wall project through.

Estevan said seeing the wall get built felt like a new scar on top of an old scar. A few years ago, he organized a protest at a tribal crossing at the border.

“The whole idea of it was to bring into public, into the world that the O’odham are still here and we don’t want this wall,” he said.

As an O’odham in Mexico, Estevan said his community has its own struggles. The land he grew on up is now owned by Mexican ranchers, and he hasn’t been allowed to live at the old house for the last few years.

He said years of changes along the border have made it hard to stay connected to the tribe on the other side. But he hasn’t given up hope.

“Yeah, it’s Mexico today, yeah it’s the United States, but as an O’odham, as O’odham, the minority that’s left, still believe and see it as O’odham land, and we’re going to still continue to be here,” he said.

Back on the US side, that’s how Hia C-ed O'odham Eiler feels.

“We’re going to continue to acknowledge that we have families on both sides and that we’re going to visit them one way or another until we meet our creator,” she said.

A few weeks ago, Eiler met a group of Mexican O’odham at a small opening right on the border. They held a ceremony and exchanged steaming pots of food across a thick metal rope dividing the two counties.

She said there’s a lot of damage that needs repair — she and others are seeking funds to repair what they say is more than $200,000 in damage to Quitobaquito Springs and its pond.

But wall or not — she said the connection with O’odham on both sides of the border will continue.