Larisa Melkumyan used to be a music teacher in Shusha — or Shushi, as it’s known by Armenians — a mountaintop city in Nagorno-Karabakh. But as fighting broke out in the contested region this past fall, her family was forced to leave.

"We stayed in the basement for four days and then fled at night as the road was being bombed."

"We stayed in the basement for four days and then fled at night as the road was being bombed." Melkumyan pointed to her feet. "These are lucky shoes!"

Related: Armenians say goodbye to Kelbajar region given to Azeris

The battle for Shusha was one of the six-week war’s bloodiest — and pieces of missile and shreds of military uniform still litter the roadside by the turnoff to the city. Shusha was captured by Azerbaijan last month, and now, Melkumyan and other Armenians are unable to return to the city.

For now, Melkumyan’s family is being hosted for free in a modest wooden house outside of Yerevan, but they aren’t sure for how long the owner’s generosity can last. And after that, it’s hard to say where they might land.

Although thousands of displaced people have started returning to the contested region of Nagorno-Karabakh since an armistice was signed on Nov. 10, many are stuck where they — mostly in Yerevan and some parts of Armenia. 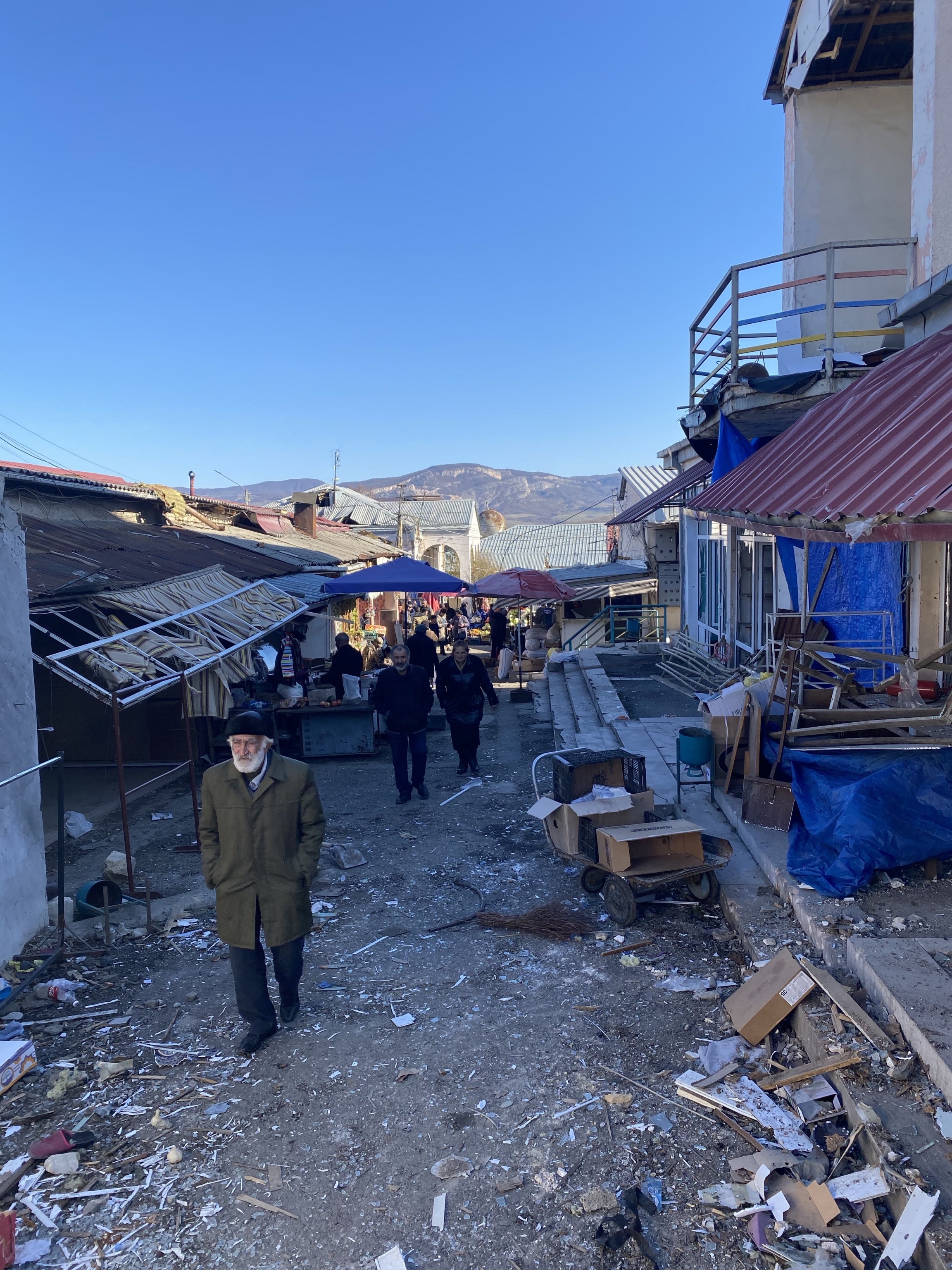 Business slowly restarts in the market of Stepanakert, the de facto capital of Nagorno-Karabakh, after being shelled during the war.

That’s because of the ongoing disruption to education, health care and other services in the region, according to Grigor Yeritsyan, president of the Armenian Progressive Youth, a nongovernmental organization that is helping provide food and supplies to displaced people now in the Armenian capital of Yerevan.

Although rebuilding has started here, for some, too much has been lost.

“We also had instances when kids are facing some psychological problems and also have some panic attacks related to constant fear, so I don’t think these families would think to go back in the near future because of all the trauma they have been exposed to.”

“We also had instances when kids are facing some psychological problems and also have some panic attacks related to constant fear, so I don’t think these families would think to go back in the near future because of all the trauma they have been exposed to,” Yeritsyan said.

Both Armenia and Azerbaijan lost more than 2,500 soldiers in just 44 days of fighting, the government says. Azerbaijan was the clear military winner but people living here will now have to rely on Russia to keep the peace for years to come.

According to the Russia-brokered peace agreement, Moscow will deploy its troops in Nagorno-Karabakh to prevent clashes between Armenia and Azerbaijan. Armenian troops were ordered to leave several regions surrounding Nagorno-Karabakh by the end of December.

Now, the enclave’s sole connection to Armenia is a long dusty road that weaves through mountains and plunging gorges.

Until a new one is built, Armenians and Azerbaijanis will have to share this road under the watchful eye of Russian peacekeepers who have set up numerous checkpoints here.

In Stepanakert, the de facto capital of Nagorno-Karabakh, there are already some signs of life starting to get back to normal.

Stepanakert was shelled on a daily basis throughout the war — electricity and gas supplies are still interrupted but most of the city is intact.

On an early November morning in the city, chickens rattled their cages, a butcher laid out cows’ heads on a table, and crates of pomegranates, peppers and potatoes lined the street. During the war, a rocket attack destroyed a clothes stall here. It’s little more than a burned shell with shards of glass and wood and ripped fabric spilling out into the street.

Next door, Rima Arushanyan, 58, was doing a brisk trade in fresh eggs and homemade vodka. She says that several hundred people are returning to the city every day, and business is picking up. 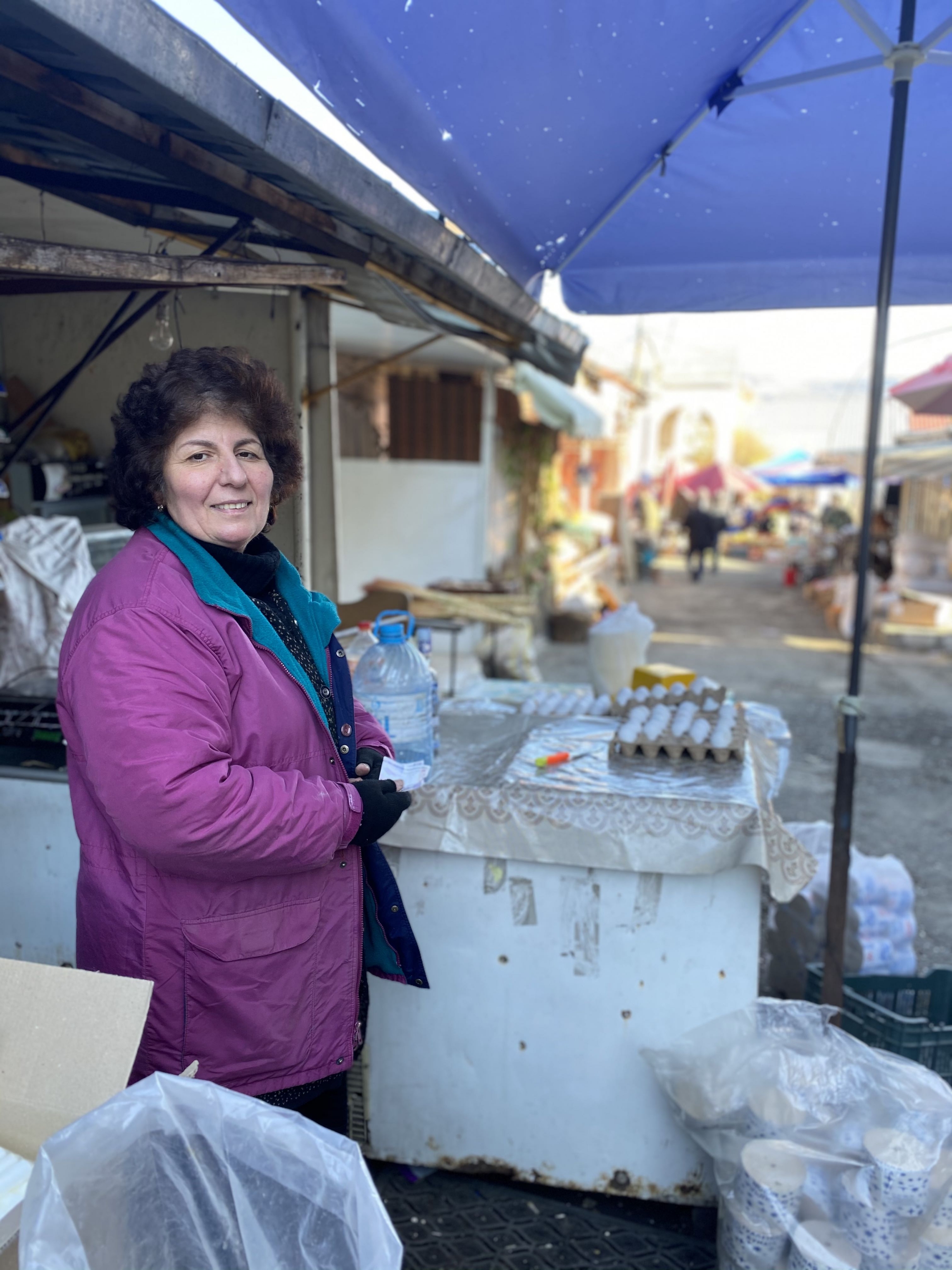 Rima Arushanyan, 58, sells eggs and homemade vodka in the Stepanakert market. Stepanakert is the de facto capital of Nagorno-Karabakh.

“Thank God nobody was here at the time when the missile hit. The owner is still on the front line, and now his business is gone but at least nobody died. Everything that is destroyed can be rebuilt.”

“Thank God nobody was here at the time when the missile hit. The owner is still on the front line, and now his business is gone but at least nobody died,” Arushanyan explained. “Everything that is destroyed can be rebuilt.”

But in frontline towns like Martuni, it’s a different story.

Levitan Danielyan, 68, plucked some juicy persimmons from the trees in his garden and washed them under the tap. They still have a layer of dust from when a missile exploded outside the pensioner’s house — the same night the peace agreement was signed. 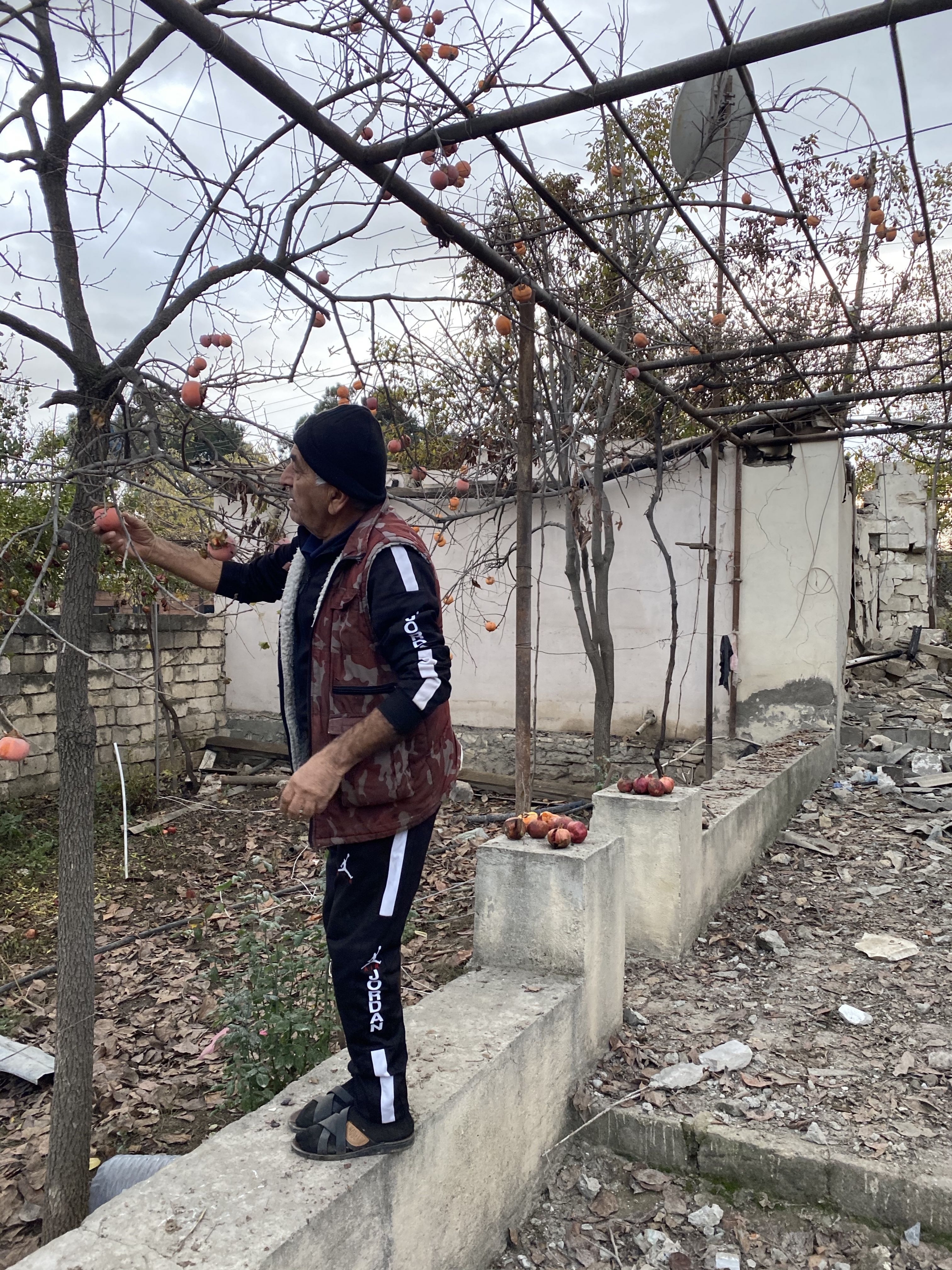 Levitan Danielyan, 68, picks some persimmons from his garden in the Armenian town Martuni around the wreckage from a nearby shelling.

“They hit us with everything they had,” Danielyan said. “All night long, they shelled the whole neighborhood but thankfully everyone on this street is OK.”

It wasn’t always this way. Under the Soviet Union, Armenians and Azerbaijanis lived right alongside each other but Danielyan says it wasn’t perfect, even then.

“The Soviet government didn’t let anyone do anything nationalistic,” he said. “Thanks to that, we lived together. But not really as friends, more like dogs and cats.”

Azerbaijan shelled his house in the ’90s.

“When the war ended in 1994, I asked the Armenian government for some assistance. Years later, they finally decided to give me some building supplies and they arrived on Sept. 26, the day before the second war.”

The region has a lot of healing to do — but Melkumyan, the music teacher who fled Shusha, says she's determined not to dwell on painful memories.

“But the past is for forgetting and we should live in the future,” she said. “We miss our Shushi, but we can’t get it back.”