Ahmed’s announcement came after the government began a military incursion on Mekelle, following the end of a 72-hour deadline given to the TPLF to surrender.

Many Ethiopians in Addis Ababa have told The World that they feel relief at the prime minister’s announcement. But those with family in Tigray say now is a time of anxiety.

On Wednesday, Ethiopia’s sole government-owned telecom provider announced that communications in some parts of Tigray had been restored after a weeks-long communications blackout.

Still, some Ethiopians say they’ve been unable to reach their loved ones in the region. Access for independent journalists has been extremely limited, so information is difficult to verify.

“This war should not have happened. It’s very sad. Their problems should have been resolved through agreement,” said one Tigrayan woman working as a contractor in Addis Ababa.

She asked to remain anonymous, citing rumors that ethnic Tigrayans outside of Tigray are being arrested.

On Monday, the spokesperson for Ethiopia’s state of emergency task force, Redwan Hussein, told Reuters the government is only arresting members of the TPLF who are suspected of being involved in the conflict.

Still, the Tigraryan contractor is afraid. She’s originally from the Tigrayan town of Adigrat, which, according to the government, is back under its control.

But she still hasn’t heard from her mother in weeks. “I do not know whether she is alive or not,” she told The World through an interpreter. “Even the phone from ICRC is not working. I try it every day, but I have not gotten anything from my family.” 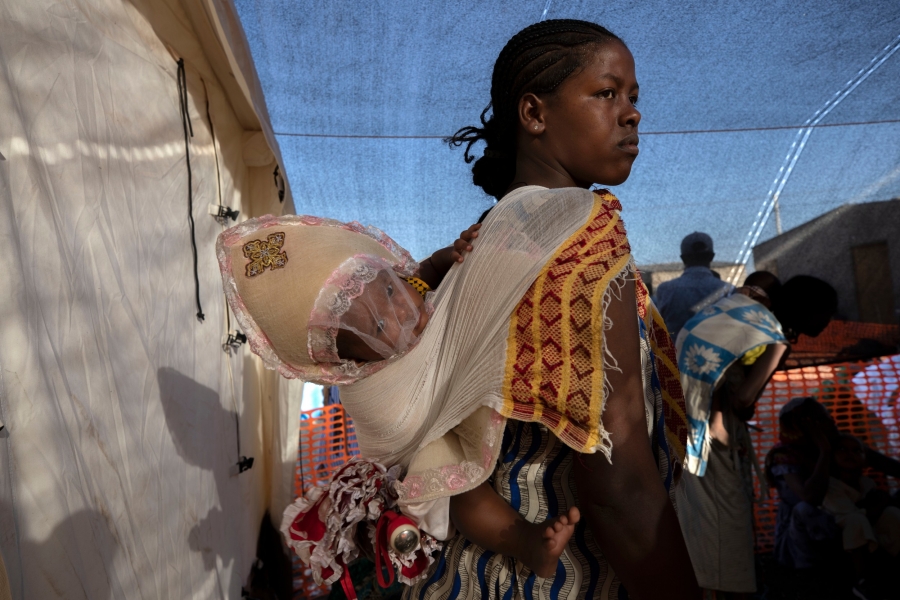 A Tigray refugee mother carries her child as she waits her turn for treatment at a clinic run by Doctors Without Borders in Village 8, the transit center near the Lugdi border crossing, eastern Sudan, Dec. 8, 2020.

The International Red Cross and Red Crescent (ICRC) has been running a family reunification hotline together with the Ethiopian Red Cross, which has also been providing ambulance and first aid services.

“We are using almost five phone hotlines,” said Engida Mandefro, deputy secretary-general for programs at the Ethiopian Red Cross, explaining efforts to locate relatives. “Families in Addis are coming physically in person and they get registered.”

Once registered, they await news of their family members, or if they are lucky, for a chance to speak with them over the phone.

But reunification remains a challenge. Thousands of people are believed to have been displaced by the conflict in Tigray, where humanitarian access has also been limited.

‘I don’t have information’

Some Tigrayans have gone to IDP camps in towns like Shire, which is, reportedly, now under government control.

“When the conflict is happening, people just feel something will happen to their family, their livelihood, so that is why they just flee and shelter in IDP centers,” Mandefro added.

“When the conflict is happening, people just feel something will happen to their family, their livelihood, so that is why they just flee and shelter in IDP centers.”

The World spoke with a young Tigrayan businessman who often works in Shire. He also asked to remain anonymous, deeply concerned about retaliation for criticizing the government.

He recalls how his girlfriend, who lives in Shire, tried to call him the night of Nov. 3, when the conflict broke out.

“She called me around 11:20 p.m. Until that time, the network was working. Later on, I woke up around 1 a.m. after I read something from Telegram and Facebook. I was calling her but it wasn’t working,” he said.

“I don’t know where she is now. I don’t have information. I don’t know whether she is going to Sudan, or Mekelle,” said the man, who doesn’t know the whereabouts of his girlfriend or his family who live in Tigray.

More than 40,000 people living in Tigray have fled to neighboring Sudan since the conflict broke out.

The Tigrayan businessman says some who have crossed the international border have managed to borrow phones to call him.

“They are really in a bad situation. They all leave their homes in Humera. They leave all their cars,” he said, referring to a town near the borders with Sudan and Eritrea that is a regional agricultural center. “They leave everything.”

“Even my brother's friend — [this man's] daughter and son died on the way and he go only with his wife.”

The Ethiopian government has said it has launched humanitarian activities in Tigray, and intends to return those who have been displaced back to their homes.

But as each day passes with virtually no communication, ordinary Ethiopians are left waiting in the dark.