Imagine a cat-sized anteater with an odd tongue, absurdly long and bubble-gum pink. Now add armor: overlapping scales rough as tree bark. Attack this creature, and it doesn’t bite or scratch. It simply curls up into an orb.

This semi-endangered creature is usually swept from one of its tropical homelands (sub-Saharan Africa, India or Southeast Asia) toward China, the largest wildlife market on Earth.

For years, the plight of the pangolin has been a niche concern, mostly worrying conservationists. But the COVID-19 pandemic has pulled pangolins into the spotlight as a possible source for future coronaviruses.

“This is the most heavily trafficked mammal in the world,” said Steve Galster, a founder of Freeland, an international watchdog group that fights the trafficking of people and animals.

“People eat the meat as a delicacy,” he said. “But their scales can also be ground up into so-called ‘medicines’ that don’t actually work.”

Indeed, you might as well gnaw your own fingernails. Both are made from a substance called keratin.

Still, the pangolin is a smuggler’s dream. They’re easy to catch, worth a bundle and silent, hardly making a squeak, even when illegally shipped through checkpoints in the backs of trucks. 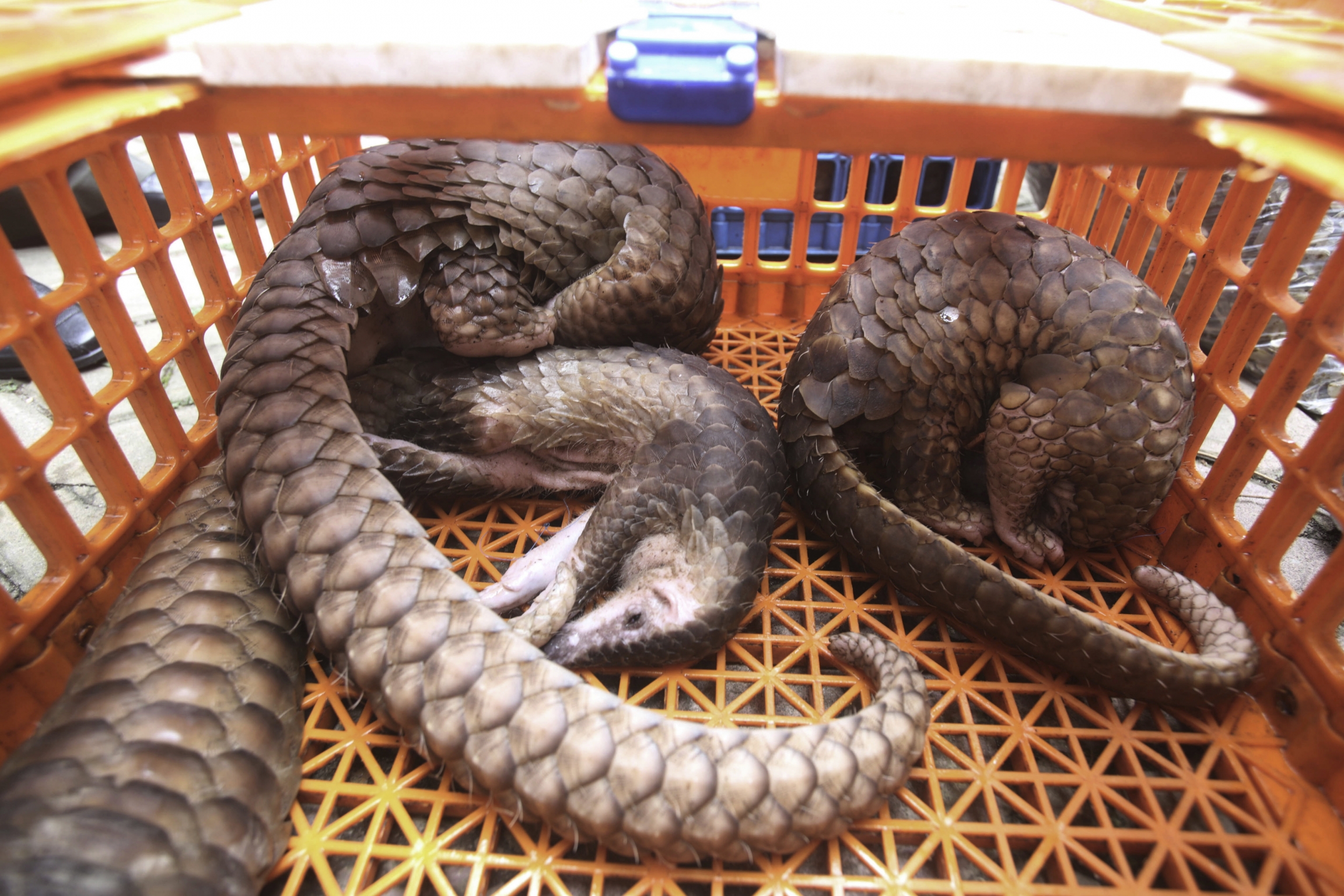 Pangolins confiscated from smugglers are put inside a container during a press conference in Medan, North Sumatra, Indonesia, Wednesday, June 14, 2017.

“Perhaps the pangolin has woken us up. ... Maybe this is Mother Nature’s revenge. Reminding people that if you mess with Mother Nature, it’s going to mess with you.”

“Perhaps the pangolin has woken us up,” Galster said. “Maybe this is Mother Nature’s revenge. Reminding people that if you mess with Mother Nature, it’s going to mess with you.”

HIV. SARS. Ebola. Each of these viruses is believed to have spread to humans from wildlife: primates, civet cats or bats.

Related: The novel coronavirus, bats and other similar viruses

What are the origins of COVID-19? Research earlier this year out of China suggested that the novel coronavirus first festered in bats, jumped to pangolins — and then infected humans. A more recent study counters those findings. What isn’t so mysterious is the pangolin’s tendency to host all sorts of coronaviruses — meaning, they are a possible vector for some future pandemic.

Anyone who doesn’t want to endure more lockdowns and economic ruin has reason to fear the pangolin trade.

Consider the filthy way in which they are trafficked. Once poachers shake a few dozen out of their hiding spots — usually trees — before they’re piled up in mesh bags and hidden in truck beds.

En route to their destination, pangolins are only fed at clandestine pit stops. That’s where, according to Galster, the smuggler will stick a hose in each pangolin’s mouth and pump in “mealy meal” — a slurry of water and cheap starch — “just to fill them up, hydrate them and keep them alive.”

Alive but just barely. So, when the pangolins reach their destination — perhaps a warehouse, run by a wildlife broker — they are sickly and weak. Their immune systems are struggling to fend off microbes picked up along the journey.

That warehouse will usually be filled not just with pangolins but “many different types of wildlife” among Asia’s major pangolin rescue operations, said Thai Van Nguyen, founder of Save Vietnam’s Wildlife.

It may be a squawky, fetid place, piled high with all manner of caged animals. Think turtles, parrots, sugar gliders, all of them peeing and breathing on one another. It’s the ideal place for pangolins, a fellow mammal, to soak up deadly viruses and pass them on to people. 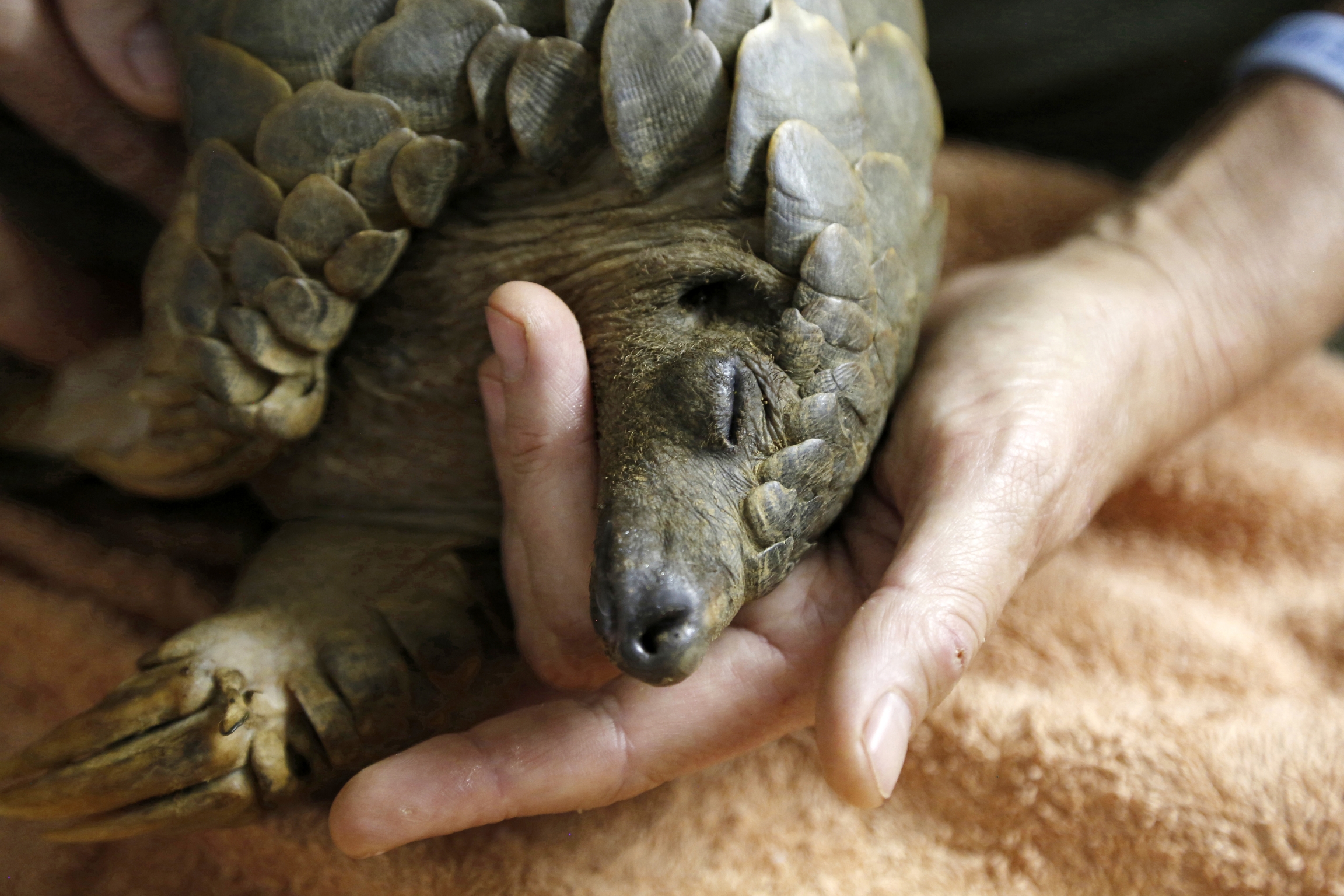 In this photo taken Friday, Feb. 22, 2019, a pangolin recovers from anesthetic at the Johannesburg Wildlife Veterinary Hospital, after undergoing a sonogram to check for pregnancy after being rescued from poachers in a sting operation.

On this front, there is good news. China has intensified a crackdown on its massive wildlife trade and, according to state-run media, upgraded “pangolins from second-class to first-class protected animals.”

Related: China cracks down on wildlife trade amid virus outbreak

Here is less-welcome news. Even if China’s anti-smuggling efforts are perfectly executed — a very big if — its government and others are up against an extremely seasoned class of trafficker.

The syndicates smuggling pangolins and those trafficking meth are “sometimes one and the same,” Galster said. “The supply chains are controlled by gangsters. They don’t care about anything other than how much money they can make.”

It’s easy to see why this is worrying. Despite its firepower and astronomical budgets, a global war on drugs has, for decades, crusaded against narcotics traffickers. Yet, drug bundles continue to cross borders every single day.

There are also parallels to climate change, another crisis that demands nations big and small set aside their squabbles and unite under a mission to spare humanity.

“We need the US and China to team up,” Galster said. “The world needs those two superpowers to fight against this common enemy: the destruction of biodiversity.”

Related: Slowing deforestation could save humanity from the next pandemic

At the moment, the prospect of US-China cooperation seems dim — even with much of the world facing more months of agony with COVID-19. Following China’s crackdown, it did become much harder to buy a pangolin on the black market, according to Nguyen.

But pangolin smugglers do not appear ready to retire. Just this month in India, prime hunting grounds for pangolin poachers, police have arrested various pangolin traffickers in Assam, a corner of the country adjacent to China.