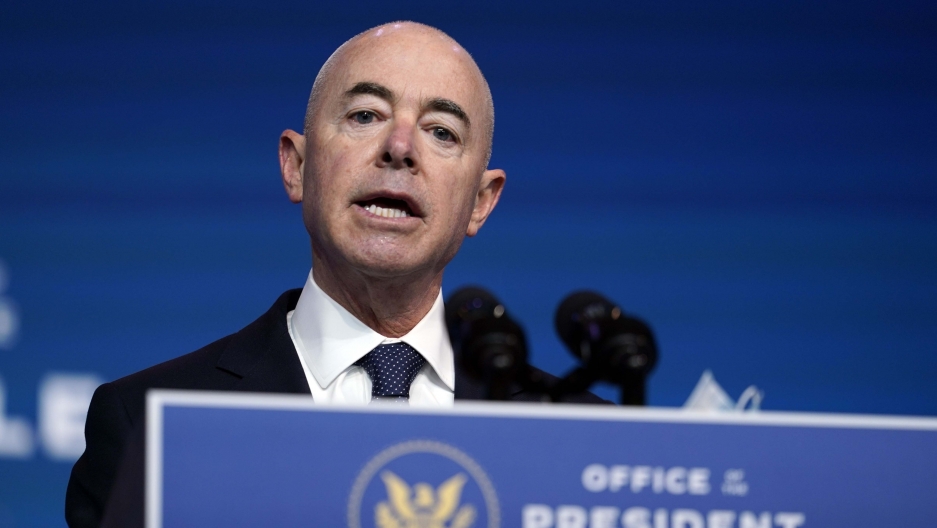 Alejandro Mayorkas is President-elect Joe Biden's nominee to lead the Department of Homeland Security. If confirmed, Mayorkas would be the first immigrant and the first Latino to serve as DHS secretary.

In a Biden transition event last week, Mayorkas spoke about emigrating to the United States from Cuba as a child.

"My father and mother brought me to this country to escape communism," he said. "They cherished our democracy and were intensely proud to become United States citizens."

During the Obama administration, Mayorkas served as deputy secretary of Homeland Security. There, he worked on immigration with Leon Fresco, an immigration attorney who served in the attorney general's office at the time.

Fresco spoke to The World’s host Marco Werman about what to expect in a Homeland Security department led by Mayorkas.

Related: Blinken will 'repair some of the damage to US diplomacy,' says John Brennan

Marco Werman: Do you have a kind of example or personal anecdote that can give us just some insight into who Mayorkas is, his style or just his approach to public service? Who is he?

Leon Fresco: Sure, absolutely. Ali Mayorkas is one of the most humble, gracious public servants you can examine or ever see in the public sector. When he first became the head of [US Citizenship and Immigration Services] his background had been one of criminal justice. He was a US attorney prior to that. And so from day one, when he started at the agency to six months in, then he was already the biggest code head you could imagine. And by code head, I mean the Immigration and Nationality Act, the legal code. He had that thing memorized in six months and was talking like he'd been doing immigration law his entire life. And so, then when it came time to do the [Deferred Action for Childhood Arrivals] program, which was the program whereby 700,000-800,000 people needed to go through immigration and to actually ask for their status to be changed, at that moment, people thought, "Well, he's not going to be able to pull this off. I mean, there's something along the line of a million cases a year period for the agency. How's he going to double back and do it smoothly?" And the fact that that ran incredibly smoothly is probably why he's getting this nomination today.

Well, let me ask you about DACA since the Trump administration tried to end Deferred Action for Childhood Arrivals. So, what do you think will happen with DACA as this new administration comes into office?

So, there's going to be three different things that you need to look out for. So, first would be just the undoing of the plan to eliminate DACA, and that will happen pretty much on day one. The second question is, can new people apply for the program? And I think you're going to see that relatively quickly, also. Then, there's a third question which is, well, those dates are kind of old and — the old DACA program that you have to be here since 2007. So, there's been a whole new crop of "Dreamers" that have sort of come into play there. And the question is, is that going to be expanded to include that group?

DACA is just one example of the Trump administration drastically changing how immigration works in the US. What do you think the Biden administration and specifically Mayorkas should prioritize on day one in office?

Well, I think the first thing you're going to see in addition to DACA is the elimination of what I would call country-based immigration bans. And then there's going to be the longer work of what you do about the asylum program because while what's been done to the asylum program under President Trump hasn't comported with the Democratic Party's values, that's certainly true, you do run a practical problem that if you sort of undo all of that very quickly, you could risk a border surge during the COVID-19 crisis.

So, as to the idea of border protection, that was a top priority for Trump. It's been so since 2016. Do you think the same approach will continue with a Biden administration and with Mayorkas?

I don't think there will be a deemphasis on border security if by border security we mean are we now amenable to people crossing the border unlawfully? No, that will not be happening under a Mayorkas administration or anyone else because we want people using proper pathways to enter the country. Now, someone seeking asylum, I think you'll see a change in the way they will be treated and they will be given the opportunity to seek asylum. But that's a different story than whether the border will be open.

Mayorkas would be the first immigrant to serve as DHS secretary. What about that background, an immigrant, a Cuban American? How do you think that will affect the way he does his job if he's confirmed?

I think that's always very helpful to have gone through the process yourself, to have a personal identification with that process. And it gives you a currency in both directions. One, sometimes, you're going to need to be tough, so, when he needs to be tough he can be tough. But also, he will understand that there are limits to the extent of what the government should ever be doing to someone going through this process. And that's helpful as opposed to, you know, if you had someone who hadn't been through it, then you never associate how much hardship you're causing on people by certain policies.