The imprint of humans is evident everywhere on planet Earth, including the tallest points around the globe.

Climate change and pollution are impacting the world's great peaks in the Himalayas. They also affect people who attempt to climb the biggest mountains in Nepal, India and China — such as Mount Everest.

Aurora Elmore, a climate scientist at the National Geographic Society, spoke to The World's Marco Werman about microplastics found on Mount Everest and how melting glaciers could affect the water source for billions of people.

Elmore oversaw the science for the 2019 National Geographic and Rolex Perpetual Planet Everest expedition, an endeavor involving 34 scientists, many of whom are also elite climbers. They worked with a specialized Sherpa support team to focus on biology, geology, glaciology and meteorology.

Related: Decades of science denial related to climate change has led to denial of the coronavirus pandemic

Marco Werman: I know you've worked with dozens of scientists to install the highest weather stations in the world on Mount Everest. How difficult is it to collect this kind of data?

Aurora Elmore: The process of collecting samples and data from the roof of the world is incredibly arduous. The team up there were having to complete work that specialized scientists do in a lab in conditions that were subzero, incredibly windy, and they had to spend almost two months on the world's highest mountain in order to achieve their scientific aims.

So weather stations, as I understand them, gather data like wind speed and temperatures. What were your most surprising findings and what else were you looking for?

Over the last 60 years, glaciers have been melting or glacier mass has been decreasing over the entire region around Mount Everest. What's really surprising about that is it’s occurring even at elevations like 6,000 meters, so that's almost 20,000 feet. We have glaciers that are losing mass because of incoming solar radiation and because of ever-warming temperatures, because of climate change. Previously, a lot of researchers would have thought that glaciers that high would be buffered from such impacts of climate change, that they would just be too cold because of their extreme elevation to show any signs of melt. And we're showing that now that's not true. 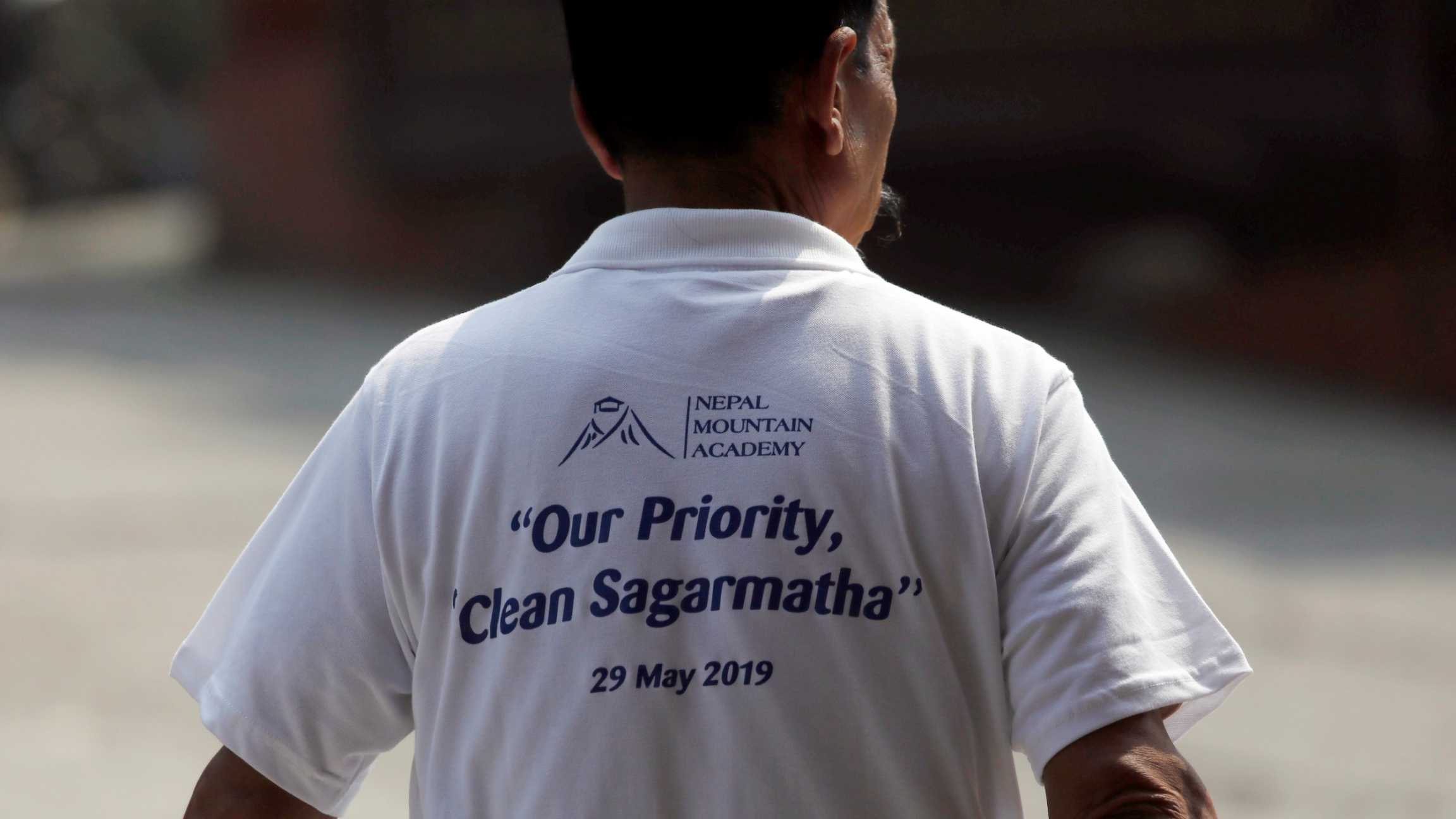 A man wearing a t-shirt that reads "Our Priority, Clean Sagarmatha" during the anniversary of Edmund Hillary and Tenzing Norgay Sherpa's assent of Mount Everest in 1953, as well as to mark International Everest Day in Kathmandu, Nepal. May 29, 2019. "Sagarmatha" is the name for Mount Everest in the Nepali language.

So these glaciers are melting at unprecedented rates. What impact does that have on people who rely on glacial melt for their water source?

That's a great question. It's devastating. In just high-mountain Asia alone, the glaciers there supply water to 1.1 billion people. That's one-seventh of the world's population. They depend on the water from glaciers at a regular rate for things like hydroelectric power, for drinking water, for irrigation. The amount of water that is melting from these glaciers on an annual basis is changing. Right now, more and more water is melting from the glaciers. Eventually we'll reach a point where there's not enough water left to support the need downstream. Another problem that we need to think about is what happens when the amount of water available comes down all at once: the so-called glacial outburst floods. Water accumulates as it's melting off glaciers and can cause extreme natural disasters to the regions that are depending on this water for their livelihoods and their lives.

One could imagine that a summiting of Everest could be more dangerous as climbers attempt to go up while glaciers are melting. Can Everest expeditions continue safely under these conditions? And what will happen to the money locals rely on, like the Nepalese Sherpas who assist a lot of these climbs, if those climbers stop coming?

Warming temperatures lead to instability of glaciers. You can see more avalanches, more crevasses forming and shifting and thus making riskier climbs. The livelihoods of people in the Khumbu Valley of Nepal are critically tied to the number of both trekkers and climbers who come to the region. The livelihoods of these people is dramatically at risk, as we've seen right now during the COVID-19 pandemic, when there are fewer climbers coming to the region. It is really terrible for the tourism industry.

Also on top of Mount Everest, scientists found microplastics. How did they get there and did you find that surprising?

Yes and no. The idea that microplastics have found their way all the way up to 27,700 feet is pretty groundbreaking. It shows that humans have impacted every inch of this planet. On the one hand, it's a really surprising outcome. On the other hand, Imogen Napper of Plymouth University, who led that study, says the fact that there were microplastics in each snow sample that she analyzed really shows how pervasive the influence of humans has been in the region. Some of the evidence of the microplastic work points to the fibers coming from the climbers. When we really love a place and we want to see it fresh and clean, we sometimes damage it just by going there.