Elementary textbooks, laminated posters of equations, and photos of smiling students are scattered on the wooden floor of a primary school of an Armenian community in a remote hamlet of the Kelbajar region.

On the wall hang colorful pencil doodles of houses and animals. Through the window, flames overtake a house next door that is slowly burning to the ground. A woman looking around the school, who doesn’t give her name, explains why properties all along the surrounding valley are on fire.

“We saw some videos of Azerbaijanis entering the houses of Armenians and started ruining everything inside, that’s why they are burning houses, not to let that happen,” she says. “Some people are even removing their family’s gravestones from the cemeteries because we don’t know what they will do with them.”

In recent days, videos have been circulating on social media that claim to show Azerbaijani troops vandalizing an Armenian cemetery in the Kelbajar region.

On Wednesday, the region — under Armenian occupation since 1994 — was transferred to Azerbaijan under the terms of a Moscow-brokered ceasefire agreement to end the six-week war that has killed dozens of civilians and thousands of soldiers. As they left, Armenians who lived there destroyed their own homes rather than hand them over to Azerbaijan.

Many have nowhere to go. Neighboring Armenia’s economy was struggling even before the ravages of war and pandemic — so once they flee, they're largely on their own.

‘I’m not burning my house’

When war erupted in and around the Nagorno-Karabakh region on September 27, many ethnic Armenians fled their homes without time to take their possessions.

Off a dusty road in Kelbajar, Hrant Davoyan, the founder of the Hrant’s Ark Foundation, opens a rear door to a van full of squirming puppies at his nonprofit pet sanctuary.

“We’re here to rescue every dog and cat we see that was abandoned by the people that had to flee,” Davoyan says. “We’ll take them to shelters and try to put them up for adoption. We’ve already had some offers by Armenians living in the US.” 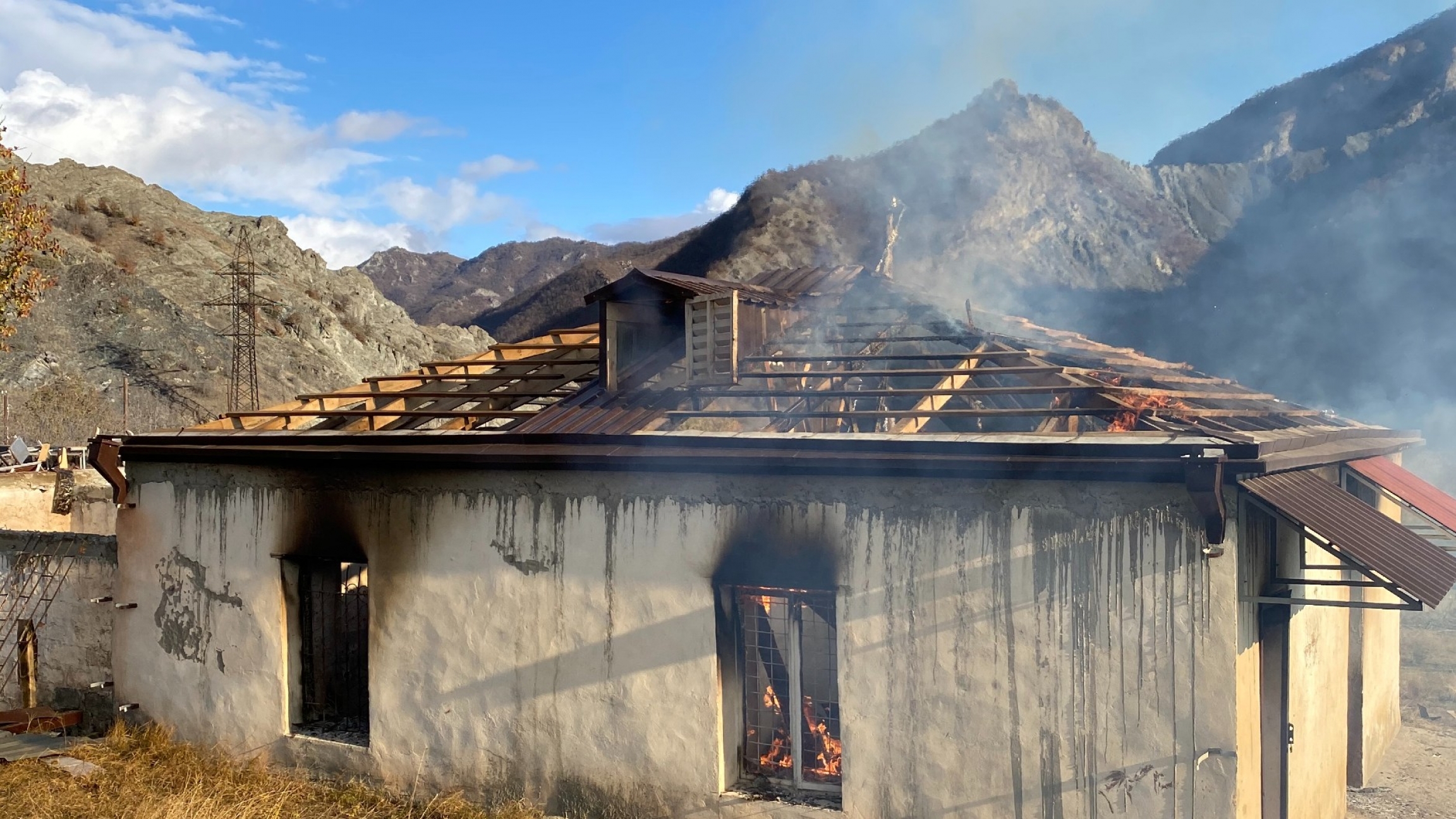 A house set on fire by departing Armenians in the region of Kelbajar.

All around Kelbajar, Armenians could be seen salvaging anything of value before the region was returned to Azerbaijan. People stripped floorboards, removed roof tiles and cut down trees. Some demobilized soldiers even shot at electricity pylons to bring down the cables.

The region has a tragic history. During the first Karabakh war in the late eighties, Azerbaijanis living in Kelbajar and other regions surrounding Nagorno-Karabakh were driven from their homes by the hundreds of thousands. After winning that conflict in 1994, the Armenian government gave some of the land to Armenian refugees who had fled from elsewhere in Azerbaijan.

Alec Davisian, a musician, was one of the recipients. He stands next to his house for the last time, his car stuffed with furniture, a mattress, paintings and vines from his garden. After fleeing Azerbaijan proper in 1988, he resettled in Kelbajar in the early 2000s. Now, at 46 years old, war has forced him to move again. Despite this, he doesn’t mind who lives there after him, even the supposed enemy.

“I’m not burning my house. I built it with my own hands, and I don’t want to ruin it,” he says, shrugging. “Let it be. Turk or Azeri, I don’t care who will live here, I’m leaving.”

‘I came to say goodbye’

Several miles away, perched in a valley surrounded by mountains that are crowned by wisps of clouds, sits the Dadivank monastery. Built between the 9th and 13th centuries, the site is the burial place of ancient saints and is adorned by medieval frescoes and crosses. It’s one of the most significant symbols of Armenian Christian heritage. In recent weeks, Armenians have been flocking here to light candles and attend services, heartbroken that they are losing full control of the complex.

The mood is somber. Armenian families huddle around, lighting candles and receiving blessings from hooded priests.

Armen Minasian’s uncle fought in Shushi during the first Karabakh war. Three decades later, Minasian, a student living in New York but vacationing in the Caucasus, found himself in that same city on the day war erupted. Minasian, 21, lets out a long sigh.

“I came to say goodbye to Dadivank and say goodbye to Kelbajar,” Minasian says. “This is the second region we are going to give to Azerbaijan, and it’s very sad,” he adds, referring to the order of territories being transferred under the new peace deal.

Until this latest war, Armenia occupied seven other regions around Nagorno-Karabakh, including Kelbajar. During the recent fighting, Azerbaijan reconquered four of them. The peace deal stipulates that Armenia withdraw its forces and hand back the remaining three by various deadlines. Agdam on Nov. 20, Kelbajar on Nov. 25, and Lachin on Dec. 1. 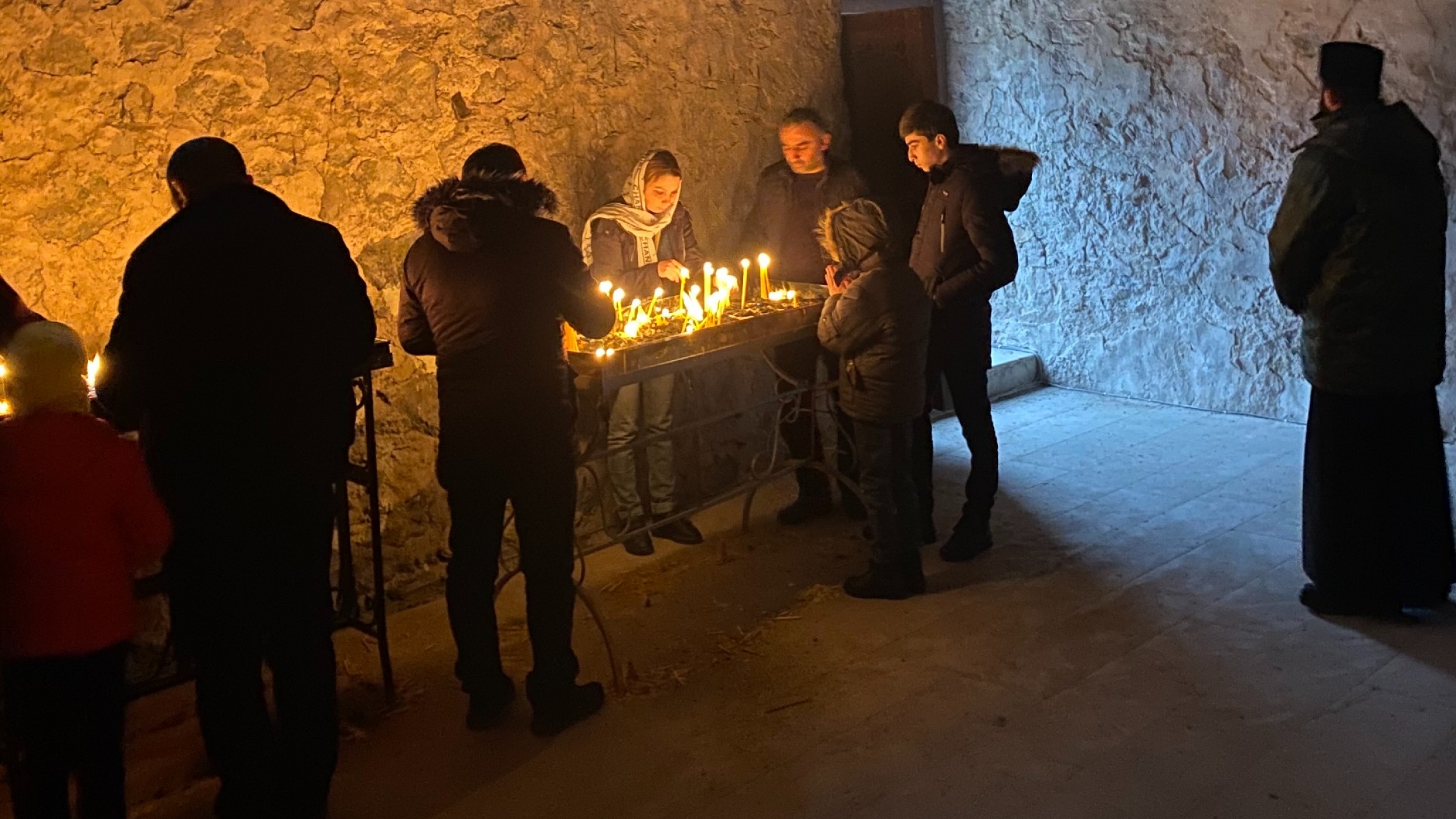 Under the terms of the Moscow-brokered accord, Russian peacekeepers currently are stationed at Dadivank and will patrol the line of contact between the two countries.

It appears that the priests will be allowed to remain in the monastery, meaning that Armenians may still be able to visit. Tanks and armored personnel carriers line the entrance.

During much of the Soviet era, Muslim Azerbaijanis and Christian Armenians lived alongside each other in relative peace. Ever since its fall, both sides have vandalised each other’s religious sites.

Olga Gambaryan, a Russian from Moscow, came with her Armenian husband and two young children months before war broke out to start a new life in Armenia.

“I don’t know what we’ll do now,” says Gambaryan, 28. “It’s painful looking at this monastery. After the genocide, so much Armenian history was destroyed in Turkey and now we worry it can happen here.”

"It’s painful looking at this monastery. After the genocide, so much Armenian history was destroyed in Turkey and now we worry it can happen here.”

As dusk descends, Russian soldiers bring boxes of tinned food and pasta to the monastery.

Father Hovhannes Hovhannisyan, the abbot of Dadivank, has become a celebrity in Armenia after he was photographed during the war wielding a rifle. Hovhannisyan, wearing a camouflage jacket over his cassocks, poses for selfies with departing visitors.

“I wanted to show that I can save my church with the cross, or with the gun,” he says, proudly. “It’s my right and my duty, and I’ll be staying.”