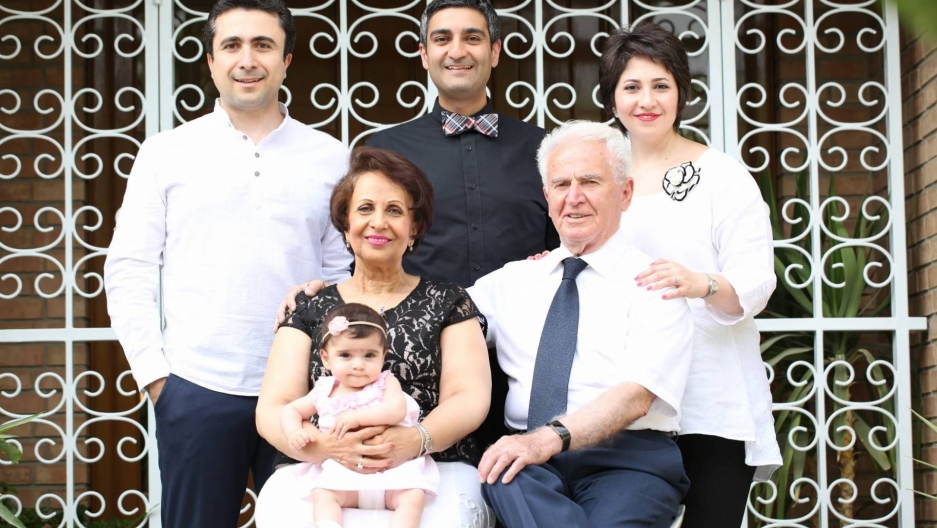 Armin Deroee, left, stands next to brother-in-law Mahyar and sister Ramina, while parents Ameneh and Ebrahim hold granddaughter Niki, at their home in Tehran, Iran, Jan. 2018.

President-elect Joe Biden has pledged that on his first day in office he will end President Trump’s “travel ban,” which bars entry for most nationals from several Muslim-majority nations, including Iran.

In California, rescinding the controversial policy could have an immediate impact on thousands of people with ties to the targeted countries, among them members of the Golden State’s Iranian American community, the largest in the country.

Armin Deroee, an Iranian American anesthesiologist living near Fresno, said the travel ban has thwarted his family’s efforts to live together in the United States.

"It's been a burden, a huge burden on our shoulders, on our minds."

Deroee and his sister are both naturalized American citizens who have waged a five-year battle to secure green cards for their Iranian parents. While their mother’s petition was approved in 2016, their father’s request languished in an “administrative processing” limbo after President Donald Trump issued the travel ban, just days after he took office.

“It's been a burden, a huge burden on our shoulders, on our minds,” said Deroee, 42. “It's been very difficult for all of us.”

Deroee and his sister have tried multiple times to advance their father’s case before US State Department officials, and they’ve sought the intervention of members of Congress, but to no avail.

In March, Deroee’s father, an 81-year-old physician in Tehran, contracted the coronavirus from a patient and was hospitalized for 10 days. Deroee said the more than 7,300 miles separating him from his father was difficult to bear during the emergency, when he wanted nothing more than to be there to care for his dad.

“That was a very tough time,” Deroee said. “It was very scary.”

On Jan. 27, 2017, Trump temporarily suspended travel by citizens of Iran, Iraq, Libya, Somalia, Sudan, Syria and Yemen into the US to “protect people from terrorist attacks by foreign nationals.” The president’s order also indefinitely banned refugees from Syria.

Critics challenged the policy in court as discriminatory and racist, and during the ensuing legal fight, the administration amended the order twice.

The current restrictions on most people from Iran, Libya, Somalia, Syria, Yemen and North Korea, as well as certain government officials from Venezuela, went into full effect in December 2017 — after the US Supreme Court allowed them to be implemented. The country of Chad was also on the list, but was later removed.

Homeland Security officials said the policy was crafted after a worldwide review, which identified countries that would not share with the US verifiable information on the identity of their citizens.

By contrast, Biden has said there is no evidence that the travel ban keeps the nation safer and could actually serve as a recruiting tool for terrorists.

American consular officials have since approved dramatically fewer visas for citizens from the targeted Muslim-majority countries. In 2018, for example, the US State Department issued less than a quarter of the immigrant visas granted in 2017 to nationals affected by the ban. Those were approved under exceptions and waivers, reserved for people who can show undue hardship.

The restrictions haven't had much of an impact on nationals from North Korea, who were granted fewer than 14 visas per year before or after the policy went into effect.

Overall, the State Department has denied more than 41,000 visa requests due to the travel ban, nearly three-quarters of them from Iran.

But civil rights groups and immigrant advocates said the impact of the policy is much higher, as additional people saw their petitions go on hold indefinitely or were discouraged from applying altogether.

“The harm that it has done to the reputation of the country and to the people and communities that [are] impacted is so immeasurable,” said Max Wolson, an attorney with the National Immigration Law Center, one of the nonprofits that sued to end the travel restrictions.

Earlier this year, Trump expanded the ban to include six more nations. The administration now bars new immigrant visas for people to permanently move to the US from Eritrea, Myanmar, Kyrgyzstan and Nigeria. Nationals of Sudan and Tanzania are not allowed to gain residency in the US through a diversity visa lottery.

'Every child that you keep separate from their parent, every person who misses a wedding... every person who misses a job opportunity, those don't just hurt the person involved ... They hurt the people that would benefit from being reunited with their family members. They hurt the places that these people would end up working'Max Wolson, attorney with the National Immigration Law Center

Biden could undo the travel ban just the way Trump started it — with an executive order. That would trigger a reversal at the State Department, US Customs and Border Protection and other federal agencies.

If Biden rescinds the travel ban as promised, the move would signal the start of a new era on how the US treats immigrants, said Abed Ayoub, legal and policy affairs director at the American-Arab Anti-Discrimination Committee. He said he hopes that Biden follows up by acting on his campaign promises to protect Dreamers and reunite migrant families at the US-Mexico border.

“By overturning the ban, which is the lowest hanging fruit, he can signal to the communities that, ‘You know what? I take immigration seriously. I take your concerns seriously,’ ” Ayoub said.

Deroee, who is one of an estimated 200,000 Iranian immigrants living in California, said getting rid of the ban would lift a weight off his family and many others.

The physician said his father, who recovered from COVID-19, was able to secure a waiver in December 2019 and another interview with US officials, which should have led to his permit to permanently move to the US.

But his application was delayed again this summer after Trump halted the issuing of new green cards, arguing the move would protect American jobs during the pandemic.

Once Biden takes office, Deroee hopes that his parents can finally come live with him in Visalia, California, just west of Sequoia National Park. And, he said, ending the travel ban would also help ease the feeling he has carried for the past four years — that he wasn’t welcome in America.

“I believe that it's going to be a huge relief for people who are affected by this unjust and discriminative act,” Deroee said. “It means a lot for us.”