As the weather cools, the number of infections from the COVID-19 pandemic is rising sharply. Hamstrung by pandemic fatigue, economic constraints and political discord, public health officials have struggled to control the surging pandemic.

But now, a rush of findings from pharmaceutical companies Moderna and Pfizer/BioNTech have spurred optimism that a novel type of vaccine made from messenger RNA (mRNA) can offer high levels of protection by preventing COVID-19 among people who are vaccinated.

Although unpublished, these preliminary reports have exceeded the expectations of many vaccine experts, including mine. Until early this year, I worked on developing vaccine candidates against Zika and dengue. Now I am coordinating an international effort to collect reports on adult patients with current or previous cancers who have also been diagnosed with COVID-19.

Moderna reported that during the phase 3 study of its vaccine candidate mRNA-1273, which enrolled 30,000 adult US participants, just five of the 95 COVID-19 cases occurred among the vaccinated — while 90 infections were identified in the placebo group. This corresponds to an efficacy of 94.5%. None of the infected patients who had received the vaccine developed severe COVID-19, while 11 (12%) of those who received the placebo did.

Similarly, the Pfizer-BioNTech vaccine candidate, BNT162b2, was 95% effective in preventing infection during the phase 3 clinical trial, which enrolled 43,538 participants, with 30% in the US and 42% abroad.

How does mRNA vaccine work?

Vaccines train the immune system to recognize the disease-causing part of a virus. Vaccines traditionally contain either weakened viruses or purified signature proteins of the virus.

But an mRNA vaccine is different, because rather than having the viral protein injected, a person receives genetic material — mRNA — that encodes the viral protein. When these genetic instructions are injected into the upper arm, the muscle cells translate them to make the viral protein directly in the body.

This approach mimics what the SARS-CoV-2 does in nature — but the vaccine mRNA codes only for the critical fragment of the viral protein. This gives the immune system a preview of what the real virus looks like without causing disease. This preview gives the immune system time to design powerful antibodies that can neutralize the real virus if the individual is ever infected.

While this synthetic mRNA is genetic material, it cannot be transmitted to the next generation. After an mRNA injection, this molecule guides the protein production inside the muscle cells, which reaches peak levels for 24 to 48 hours and can last for a few more days.

Why is making an mRNA vaccine so fast?

Traditional vaccine development, although well studied, is very time-consuming and cannot respond instantaneously against novel pandemics such as COVID-19.

For example, with seasonal flu, it takes roughly six months from identification of the circulating influenza virus strain to produce a vaccine. The candidate flu vaccine virus is grown for about three weeks to produce a hybrid virus, which is less dangerous and better able to grow in hens’ eggs. The hybrid virus is then injected into a lot of fertilized eggs and incubated for several days to make more copies. Then the fluid containing virus is harvested from eggs, the vaccine viruses are killed, and the viral proteins are purified over several days.

The mRNA vaccines can leapfrog the hurdles of developing traditional vaccines, such as producing noninfectious viruses or producing viral proteins at medically demanding levels of purity.

Also, mRNA molecules are far simpler than proteins. For vaccines, mRNA is manufactured by chemical rather than biological synthesis, so it is much quicker than conventional vaccines to be redesigned, scaled up and mass-produced.

In fact, within days of the genetic code of the SARS-CoV-2 virus becoming available, the mRNA code for a candidate vaccine testing was ready. What’s most attractive is that once the mRNA vaccine tools become viable, mRNA can be quickly tailored for other future pandemics. 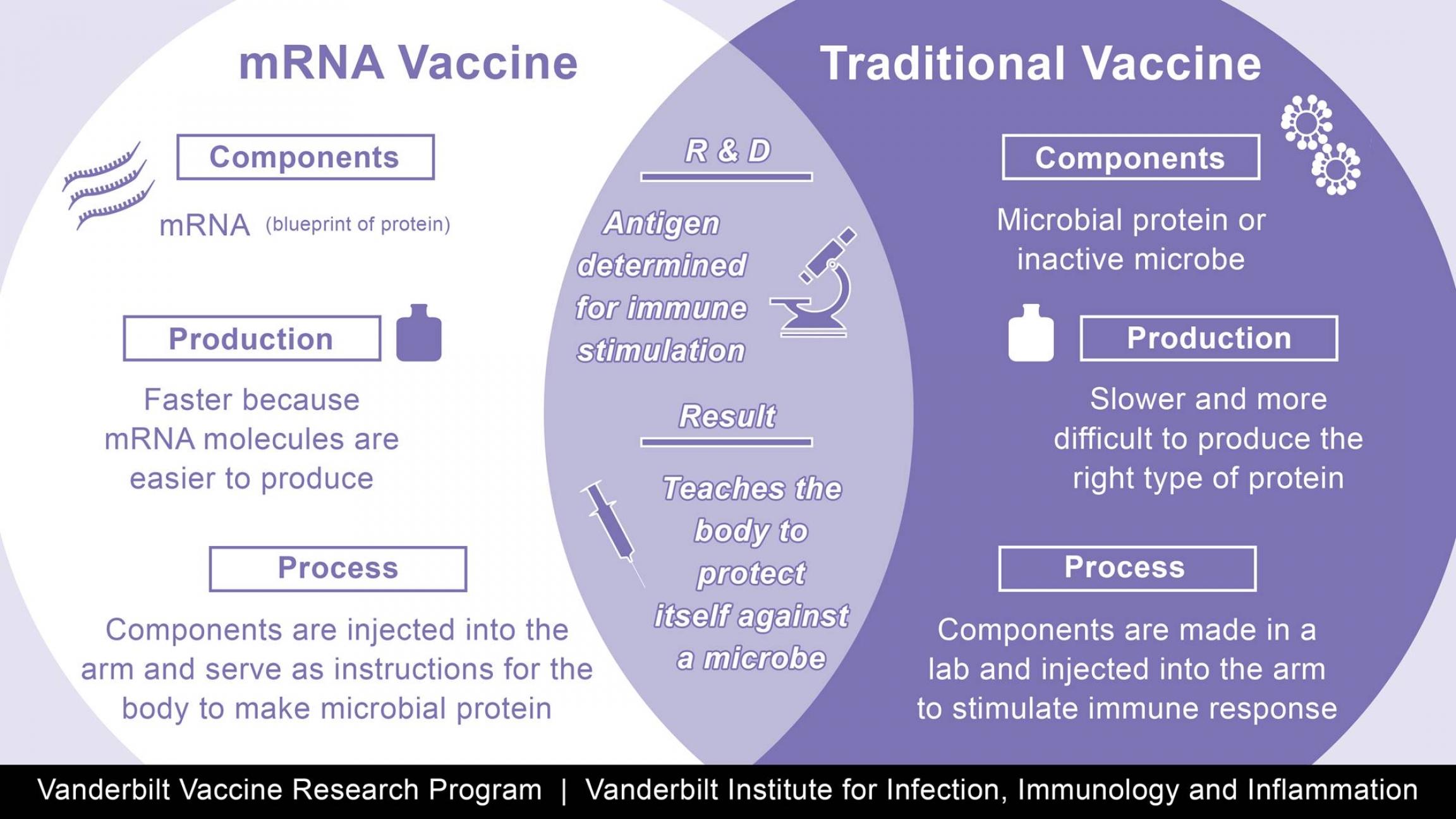 A comparison of traditional methods with the new mRNA vaccines.

What are problems with mRNA?

MRNA technology isn’t new. It was shown a while back that when synthetic mRNA is injected into an animal, the cells can produce a desired protein. But the progress remained slow. That’s because mRNA is not only notoriously unstable and easy to degrade into smaller components, but it is also easily destroyed by the human body’s immune defenses, which make delivering it to the target very inefficient.

But beginning in 2005, researchers figured out how to stabilize mRNA and package it into small particles to deliver it as a vaccine. The mRNA COVID-19 vaccines are expected to be the first using this technology to be approved by the FDA.

After a decade of work, the mRNA vaccines are now ready for evaluation. Physicians will be watching for unintended immune reactions, which can be both helpful and detrimental.

The most important challenge for development of a mRNA vaccine remains its inherent instability, because it is more likely to break apart above freezing temperatures.

Modification of the mRNA building blocks and development of the particles that can cocoon it relatively safely have helped the mRNA vaccine candidates. But this new class of vaccine still requires unprecedented freezer conditions for distribution and administration.

What are the refrigeration requirements?

The Pfizer-BioNTech mRNA vaccine will need to be optimally stored at minus 94 degrees Fahrenheit and will degrade in around five days at normal refrigeration temperatures of slightly above freezing. Not surprisingly, Pfizer is also developing shipping containers using dry ice to address shipping constraints.