As the nation celebrates our 17 million living veterans, it is also important on Veterans Day to know that the number of these heroes who are ending their own lives prematurely is rising.

In the general population, suicide is the 10th most common cause of death, but among veterans with PTSD, it’s fourth. Among veterans younger than 35, it’s second. Suicide rates are also rising among members of the military. Since 2017, rates for active-duty service members have been above those of civilians. The same is true for National Guard service members since 2015 and and nonactive veterans for the past decade.

I’m a researcher who studies risk and resilience in military and veteran families. I can tell you that the single most common stressor for those who attempt or complete suicide is a serious relationship difficulty with an intimate partner or someone else within the previous 90 days. And more than half of service members who attempt or complete suicide had been seen within those 90 days by a medical, mental health or social service professional. Almost one-third communicated a potential for self-harm.

It’s not only medical professionals who can help a veteran who is dealing with despair and contemplating death by suicide. You can also help.

Some recent studies have suggested that a complex array of factors combine to lead a person to contemplate death by suicide. And many things contribute to the feelings of despair that veterans experience.

In addition to post-traumatic stress disorder, other mental health problems and medical challenges, veterans also face unemployment, bereavement and parenting issues. It is easy to understand how veterans might feel overwhelmed and desperate.

Through my work, I’ve heard firsthand the stories of service members and veterans who had decided to take their own lives but did not. Often I’ve observed that it was a “good catch” that did it: a friend or family member answered a call at an odd hour; noticed the person seemed “off” and asked careful questions; stayed with them while summoning professional help; or checked in with them so they wouldn’t feel isolated. Families, friends, neighbors and colleagues all may have opportunities to make these catches.

Peer support programs may also help. Alcoholics Anonymous and Narcotics Anonymous are effective alone or in combination with clinical treatment for substance use disorders. Results regarding mental health problems such as depression are more mixed, but a consistent finding is that peer support can help promote compliance with treatment, communication with clinicians, improved coping and self-care, and increased feelings of hope and self-efficacy. Studies suggest that peer support can also help people during transition times, particularly when they are leaving military service to return to civilian life.

Veterans themselves are taking action. In the Department of Veterans Affairs, peer facilitators are key to a new “whole health” approach. American Legion members also offer support aimed at preventing suicide. Across the country, veterans treatment courts routinely include mentors to boost the success of clients. 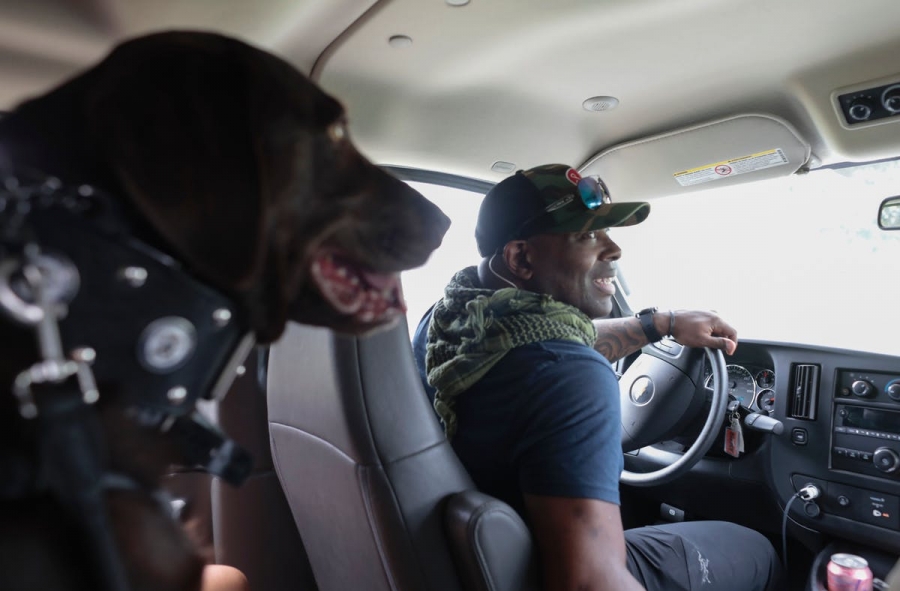 Veteran Chad Brown drives with his service dog, Axe, in Boynton Beach, Fla., on June 19, 2017, to a meeting of Soul River, a group he founded to bring together veterans dealing with PTSD.

Peer support is out there

Not all peers have to be veterans. Sometimes the strongest connections are with those who have had different challenges and who also can therefore relate — like a family member’s addiction, or one’s own disability or mental health problem.

Many peer networks can help, including the National Alliance on Mental Illness, the American Cancer Society and the Alzheimers Association. Even though they may not focus specifically on suicide, they help reduce isolation, increase social connections, and support coping and self-care.

We can all help to prevent death by suicide. And joining a peer support program or training to make ourselves ready aren’t the only ways. Simply being more attentive as a friend, family member, neighbor or colleague can help.

It is normal for a person to feel awkward when talking to someone contemplating death by suicide. Learning is a great way to prepare. For example, “Question, Persuade, Refer (QPR)” is evidence-based training that can help anyone recognize early warning signs of suicide, learn ways to offer hope and encouragement, and connect with help.

On this Veterans Day, by all means, let’s thank veterans for their service. But perhaps we could challenge ourselves to go further and do service on behalf of others. Who knows what opportunities might arise to help someone in need?

If you or anyone of your loved ones are in need of help, call the National Suicide Prevention Lifeline at 800-273-8255 or text 838255. You can also get help at the Veterans Crisis Line and the Military Crisis Line.

Shelley MacDermid Wadsworth is director of the Center for Families and the Military Family Research Institute at Purdue University. This article is republished from The Conversation, an independent nonprofit news organization spreading the knowledge of experts from academia, under a Creative Commons license.