Editor’s note: This story contains some descriptions that may be disturbing to some.

One afternoon last month, Omar Alshogre and his best friend were driving in the mountains of Norway and admiring the fall colors.

Alshogre was also on his phone, checking emails constantly because he was expecting an important message — most likely a rejection, he said. The 25-year-old had applied to one of the United States' most prestigious universities, and he was waiting to hear back.

Alshogre got out of the car, jumped on the guardrail and yelled: “I made it to Georgetown!” His friend Tom Omdal captured the excitement in a video, which went viral after Alshogre posted it online.

Alshogre, a Syrian refugee in Sweden, has come a long way since leaving Syria during the war. He was a teenager when security forces in Syria arrested him for participating in demonstrations. He was imprisoned and tortured. Eventually, he got out and made his way to Turkey and then Europe. He arrived in Sweden in December 2015. 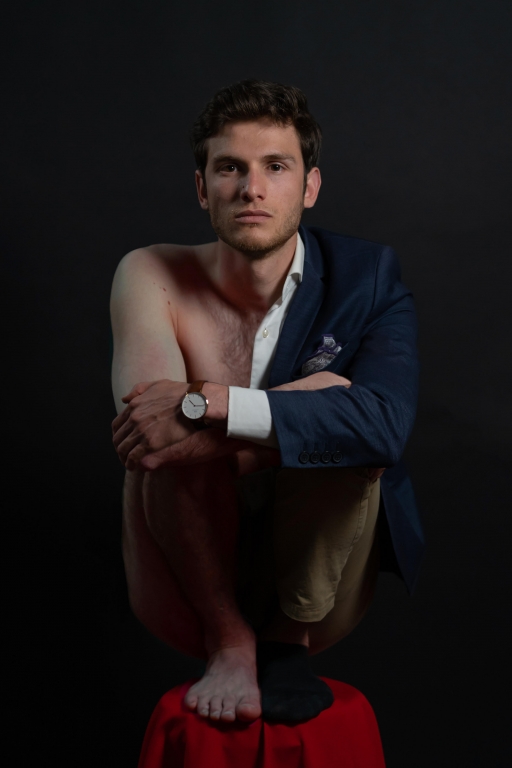 Omar Alshogre, half-naked, half-dressed here, said the photo shows how "[I] can’t forget my past no matter how good my present or future is. I create a future based on my past." Alshogre survived imprisonment and torture in Syria. Now, he's headed to school in the US.

After Alshogre found out he had been accepted to Georgetown University, in Washington, DC, he spent the next 20 minutes debating who he should call first. His birth mom? Or maybe his Swedish mother — the woman who adopted him when he moved to Sweden as a refugee? It was a tough decision. He decided on his birth mother first.

Related: People in northeast Syria are in desperate need of help. Aid groups can’t get to them.

“So, I called my mom, told her, ‘Mom, I will tell you something but you don’t tell anybody else because I want to have the joy of telling them.’ And I told her I was accepted to Georgetown. She started crying. And one hour later, the entire world knew about that. My mom told everybody, and every person mom told, she says to them, “Don’t tell Omar that I told you.””

Alshogre said people loved to see him so happy: “It's amazing how much my laugh, my happiness reached people. People said, ‘We know Omar suffered a lot, and now he's getting reward[ed] after what he went through.’”

Alshogre was 15 years old when the Arab Spring swept through the Middle East. Syria witnessed one of the biggest uprisings in its history. People took to the streets to bring down President Bashar al-Assad. Alshogre and his cousins joined in.

“I didn’t think about the consequences of joining the demonstration in Syria. I didn’t know the regime will kill people, arrest people, torture people for just asking for freedom.”

“I went to the demonstration,” he said. “I didn’t think about the consequences of joining the demonstration in Syria. I didn’t know the regime will kill people, arrest people, torture people for just asking for freedom.”

Related: US targets Assad govt and backers with toughest sanctions yet against Syria

At first, the demonstrations had a party atmosphere to them. People banged drums and chanted slogans. But after a while, security forces started gunning people down in the streets, and protesters began to disappear.

Alshogre and his cousins were arrested, too. Alshogre was released only to be arrested again.

“I was kept in prison, [I] was tortured. I’ve been released. And I’ve been detained again,” he said.

Alshogre remembers horrific details about his time at the notorious Branch 215 prison outside of Damascus. He says he was tortured, his fingernails pulled out. He was surrounded by dead bodies.

Later, he was transferred to another prison known by detainees as “the slaughterhouse.” By the time Alshogre’s mom scraped together enough money to get him out, he said he was a shadow of his former self: “really skinny, really tired, really sick and had tuberculosis.”

His mom had fled to Turkey, and she paid a smuggler to get him out of Syria. But he knew he had to get to Sweden for medical care. So, like many thousands of migrants leaving Turkey for Europe, he began a monthlong journey that began with a rubber boat.

“Going through 10 countries to get treatment for a sickness that is killing me … that wasn’t easy.”

“Going through 10 countries to get treatment for a sickness that is killing me … that wasn’t easy,”  he said. He had contracted tuberculosis in prison.

On a cold, December day in 2015, Alshogre made it to Sweden. He saw snow for the first time. He started a new life. A Swedish family adopted him and his younger brother, who had been with him on the boat. He started school. Alshogre's mom joined her boys in Sweden in 2018. But other family members, including his dad and his cousins, died in Syria.

Related: Syria’s first family is caught in a feud

Alshogre made it his mission to draw attention to the crimes committed by the Syrian government. He spoke at schools and told his story at gatherings. He gave testimonies to European war crimes investigators and even to the US Congress.

Testimony from witnesses like Alshogre helped push the US government to impose sanctions on Syria. Last year, the Trump administration announced the Caesar Syria Civilian Protection Act, which sanctions the Syrian government, including Assad, for war crimes against the Syrian population.

European courts have been using testimonies to prosecute former prison officials and torturers. But Alshogre’s work is not done, he said. When he recently applied to Georgetown, he had one goal in mind: to get a quality education.

“The more you know, the more dangerous you are for the dictatorship,” he said.

Alshogre will move to Washington, DC, in January and plans to study business and international relations as an undergraduate. He wants to continue to raise awareness about people who have disappeared in Syrian prisons. And he’s hopeful that one day, he can return to Syria to help rebuild his country.