Stephen Shainbart had never been to Toronto, Canada. But on the night Donald Trump was elected president in 2016, he decided to move there. 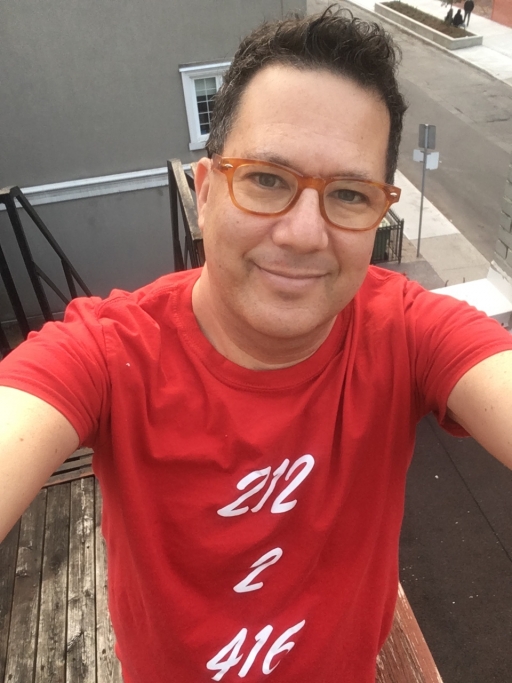 Stephen Shainbart, who left New York for Toronto after Trump took office, wears a shirt with the area codes of his previous and current cities.

“I was very concerned for the future of my safety and the future of the United States, and I thought it was a very dangerous thing,” Shainbart said.

Shainbart, a psychologist and a native New Yorker, says he called an immigration lawyer the next day. Three years later, he became a permanent resident of Canada and settled into his home in downtown Toronto.

Related: The world is watching: Global reactions to US election

He says Toronto resembles New York, except with fewer rats and less stress.

“Generally, people are kinder to each other as strangers than they are in the US, and that’s very pleasant,” he said.

Shainbart was one of the thousands of Americans who, feeling shocked by Trump’s victory, went online as election results poured in, looking for information about how to move to Canada. So many people searched that Canada’s immigration website crashed. Shainbart says he is proof that some of those people went ahead with the decision.

Melanie Gardner and her husband also made the move north to Ottawa, from the state of Maryland, a few months after the 2016 vote.

Gardner says she was hysterical for weeks after election day. She says she had never considered moving to Canada before then, even though her husband is Canadian. But Trump’s victory fundamentally changed the way she sees America. Both Gardner and her husband were retired, so they decided it was time to flee.

“It completely turned my world upside down. ... It no longer felt like my country. The country I grew up in. It was hostile. The red hats were scary. I was afraid. There were too many guns. It just felt like a foreign place.”

“It completely turned my world upside down,” she said. “It no longer felt like my country. The country I grew up in. It was hostile. The red hats were scary. I was afraid. There were too many guns. It just felt like a foreign place.”

Canada’s immigration department says it’s seen a boost in applications from the US. In each of the first three years of Trump’s tenure, an average of 1,875 additional Americans applied for permanent residency. An average of 1,163 of those additional applications per year was approved. There’s no way to know for sure how many of them were directly related to the rise of Trump.

Erika Peterson left San Jose, California, for Ottawa, in 2018. And although the US political climate wasn’t the main reason, she says it played a role.

“While the state of politics wasn’t why we left, it made it a lot easier,” she said.

Peterson says she and her partner were feeling torn about making the move north for a new job. Then came the school shooting in Parkland, Florida. And Peterson says she was disgusted by Trump’s refusal to put stricter gun controls in place.

“While the state of politics wasn’t why we left, it made it a lot easier. ... It kind of felt hopeless."

“It kind of felt hopeless. And as far as this perspective of being a mom, like, I’m seeing the reality of like, oh yeah, kids that go to school these days, they have to have active shooter drills all the time — and just not wanting to subject my daughter to the worry,” she said.

Peterson says she feels safe in Canada and plans to stay. But she’s worried that the legacy of Donald Trump will be the damage she feels he’s done to American democracy. She says she voted by absentee ballot last month for Joe Biden in her former state. Gardner says she also voted for Biden, and that she spent hours as a telephone volunteer, encouraging US expatriates to vote.

Related: Europe's far-right stands behind Trump in US 2020 election

Shainbart says he’s actually been more politically active from his home in Canada than he’s ever been. He recently published a book about his experience immigrating to Canada. But he said that despite his move, he’s still an American citizen and that he considered the 2020 election “the most important election of my lifetime.”

He said he’s comforted by a Biden victory but that even that won’t convince him to return to the United States.

He said Trump and his policies are still very popular with many Americans — and he believes they’ll play a role in American life for a long time to come.