Shortly after Abraham Lincoln was elected on Nov. 6, 1860, a woman from Alabama, Sarah Espy, documented her concerns in her diary. She wrote that she felt “grieved,” and explained why. “For it is thought now to be certainty that Lincoln [won]…and that the Southern States are going to withdraw from the Union. If so, it is the beginning of woe.”

While the particular concerns change, every election triggers distress for some people. That certainly held true for two previous presidential elections: Many Americans were deeply upset following the victories of Barack Obama in 2008 and of Donald Trump in 2016.

Symptoms of depression — sadness, loneliness and fatigue — seem to be common responses to electoral loss. This may prove to be a particularly widespread phenomenon in the aftermath of the 2020 election, given the nation’s contentious political divide.

People don’t typically talk about politics in the same sentence as grief and woe, but the two are more closely connected than we might realize. I am a political scientist who studies how mental health shapes the way citizens think and engage with politics and elections. In my work as a political scientist, I’ve found that citizens who suffer from depression are less politically engaged.

The politics of depression

Psychologists have long recognized depression as a frequent response to loss. Elisabeth Kübler-Ross famously named it as one of the five stages of grief, along with denial, anger, bargaining and ultimately, acceptance. Other research has since questioned this concept of stages, finding instead that some people experience just one or two of these emotions.

While scholars have written about anger and denial in relation to politics, we know far less about depression. Evidence I’ve compiled suggests it’s relatively common.

For example, a 2004 Pew Research Center survey found that 29% of Kerry supporters felt depressed in the wake of George Bush’s reelection and a 2008 Associated Press poll found 25% of Republicans were upset following the election of Barack Obama. Polling data from 2010, 2012 and 2016 reveal similar results.

This data captures the intensity of emotions we feel from electoral loss. The website PsychCentral noted that traffic to their “5 Stages of Grief & Loss” page was up by 210% the day after Hillary Clinton lost the election in 2016 — and their most popular article was “Healing after the Election.” Similarly, Google Trends data on grief-related searches spiked following the 2008 and 2016 elections. 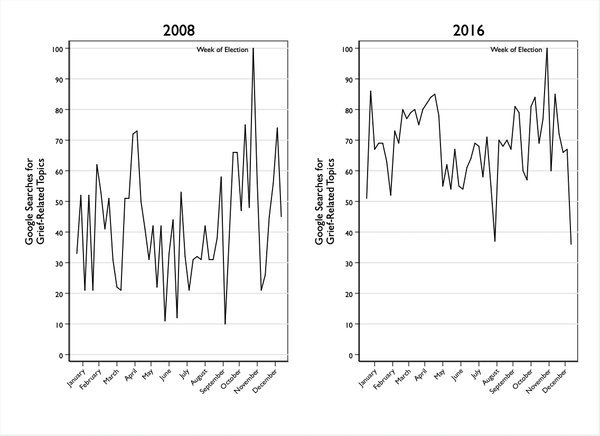 Grief-related searches on Google spiked after the 2008 and 2016 U.S. presidential elections.

The evidence is clear: Many Americans feel depressed after elections.

There is no easy way to make depression disappear, but there are actions we can take to cope.

Ultimately, democratic societies select leaders through voting, but one unsavory part of the process is that many citizens don’t get their preferred choice.

Being on the losing side of an election may create distrust in the system and dissatisfaction with democracy. My research shows that it hits us emotionally, too. But instead of letting hurt sideline you from politics, use it to fuel the passion you felt before the election.