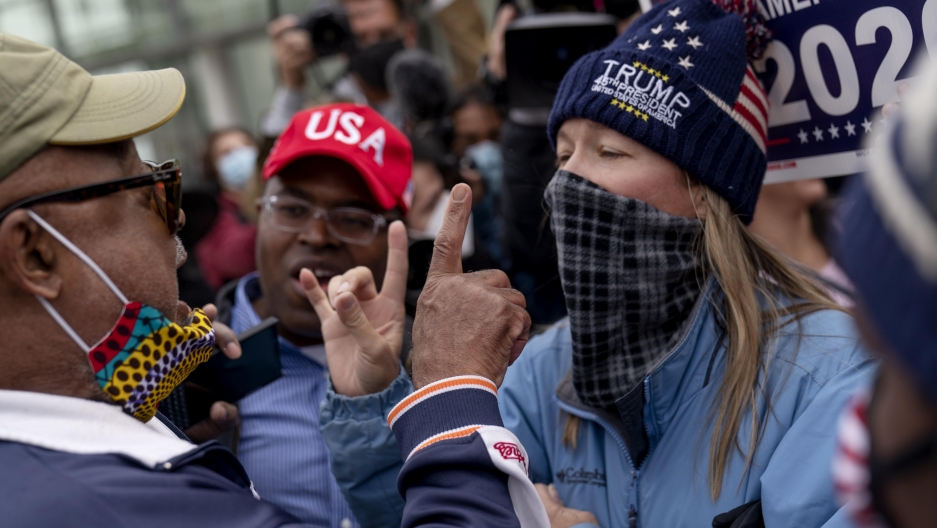 Trump supporters at right argue with a counterprotester at left as they protest election results outside the central counting board at the TCF Center in Detroit, Michigan, Nov. 5, 2020.

In cities across the US, supporters of President Donald Trump have gathered at election offices to protest unsubstantiated rumors of fraud as ballots were being counted. In key battleground states like Michigan, they demanded an immediate end to the counting. In other states, like Arizona, where Trump seemed to be catching up to Democratic challenger Joe Biden, they demanded the counting to continue. Some of the Trump supporters are armed.

Such protests have rarely been seen in the United States.

The International Crisis Group analyzes and tries to prevent conflicts across the globe, from Lebanon to Ethiopia to Myanmar, and now, the United States, for the first time in the organization's 25-year history. Stephen Pomper is the lead author of their recent report, “The US Presidential Election: Managing the Risks of Violence." It warns that violence could erupt during protracted ballot counts, aided by the president's “incendiary rhetoric." It also advises media and government leaders to be extra cautious in projecting a winner. Pomper joined The World's host Marco Werman from Washington, DC.

Marco Werman: When you see scenes like the one we just heard in Detroit yesterday, Republicans echoing Trump with “stop the vote," what is your reaction?

Stephen Pomper: One of the things that we were trying to do with our report was to give a little bit of an early warning that because of the mixture of risk factors that we were looking at in this context, you could be seeing situations like that, and that states and localities — which really have responsibility for managing the electoral process here in the United States — needed to be prepared for it. And it sounded, from what you just described, like that was the case. In fact, you know, the local law enforcement authorities were ready for this and managed to create a cordon around the counting facility that allowed people to continue to do their work there.

Your report does talk about risk factors: political divisions, disinformation, armed militias and something you call the "Trump factor." Did the run-up to the US elections set off some kind of alarm bell at Crisis Group headquarters?

It really did, and not just in the run-up to the election, but actually a little earlier than that, in the context of the Memorial Day police killing of George Floyd in Minneapolis. And what really brought our attention to the US in that context was not just the combustible nature of that polarized dynamic here in the US, which was overlaid with issues of race and identity, but also the way in which the president and his leadership team were engaging with the issue and the very martial language that people were using to talk about how to manage the situation. You'll remember members of the president's team were talking about "dominating the battlespace" and playing with the idea of using the most blunt instruments of American power to try and manage a situation of civil unrest.

Specifically, the George Floyd incident was the alarm? Did you see parallels with other events in other countries that preceded elections that gave you that concern?

I would say that the George Floyd killing was the entry point for our looking at US domestic affairs. With regard to the election, there were four factors in particular that we saw as crosscutting with other countries. And the ones that we identified in particular were political polarization overlaid with issues of race and identity; the proliferation of armed groups at the fringes of the political spectrum. The third was the prospect of a protracted period when the outcome for the election might be contested, in doubt, where tensions could build between the two sides. And then the fourth was what you alluded to before, the Trump factor — the fact that this president, and we saw this in the George Floyd context, is not somebody who tries to heal divides or calm the waters. Often, he actually stokes tension in order to try and achieve personal and political goals.

With the exception of a few incidents, American streets have been pretty calm. Does the Crisis Group see this as a good sign for American democracy?

There's a lot of work that needs to be done to try and heal the polarized nature of American politics. It certainly won't help if the country devolves into a chaotic scene around this election. So, from that perspective, yes, to the extent that this can be a relatively calm transition, it's going to allow that healing process to begin from a better place.