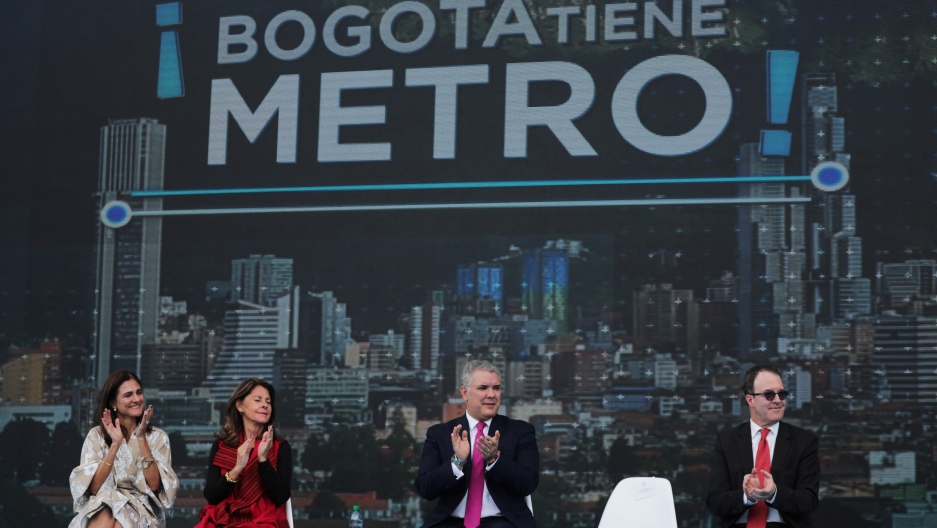 Colombia's President Iván Duque, reacts during the presentation of the award of the contract for the construction of the Bogotá subway, Oct. 17, 2019.

Political and business leaders in Colombia’s capital have been trying to build a metro system in Bogotá — on-and-off — for the past 80 years.

So when Mayor Claudia López finally presided over the official start for construction of the system’s first station last month, she led a ceremony that was rich in symbolism.

López thanked Colombia’s president, Iván Duque, for his support. She also thanked prior Bogotá municipal administrations for their efforts. And, as she sat in front of a wall adorned with writing in Spanish and Chinese, she welcomed Lan Hu, China’s ambassador to Colombia.

After a long, public bidding process, the Chinese government-owned China Harbour Engineering Company and Xi’an Rail Transit Group, began building the first line of the Bogotá metro in mid-October. The project, scheduled for completion in 2028, will extend almost 15 miles and cost about $3.9 billion. The two companies have built railways in Hong Kong, Singapore, Sydney and other cities in Southeast Asia and Australia.

"Every cosmopolitan city needs a Chinatown, and Bogotá is no exception. Our relationship with this great nation, the People’s Republic of China, is just beginning."

“May this be the first Chinatown in Bogotá,” López said in the southern borough of Bosa. “Every cosmopolitan city needs a Chinatown, and Bogotá is no exception. Our relationship with this great nation, the People’s Republic of China, is just beginning, and with their help, we’re going to complete this and probably many other projects in Bogotá and Colombia.”

The Bogotá metro is a major feat for a city that has long sought to join other South American capitals with rail systems: Buenos Aires, Brasília, Caracas, Lima, Santiago de Chile. And since Colombia is one of the last regional economies to receive major Chinese investment, the project shows how the Chinese government’s influence is solidifying.

Building the new metro line will be a major achievement for the Chinese state-owned companies. It took them many years to understand Colombia’s unique political and business culture, said Diana Andrea Gómez Díaz, an international relations professor at the National University of Colombia.

Unlike in Brazil or Chile, where Chinese companies have had a major presence for decades, in Colombia they’ve entered the market only in recent years. But it hasn’t been without conflict.

In 2016, the Chinese ambassador in Bogotá was heckled when he visited a downtown shopping area. Local business owners were upset because they said Chinese importers were competing unfairly. That incident speaks to one of the biggest challenges for even a small-scale migration from China, Gómez Díaz said. Colombia’s migration policies have historically been unfriendly to migration from Asia.

“How do we integrate the new Chinese migrant community in Bogotá? I think that’s a very delicate matter,” Gómez Díaz said.

Related: 8 million people. No subway. Can Bogotá thrive without one?

Construction of the Bogotá metro could be a turning point for Colombia — toward the Asia-Pacific region and away from one of the country’s closest longtime allies: the United States.

As the US pulls further away from Latin America, China has a comprehensive strategy with large-scale construction projects like the Bogotá metro. It's also loaning money to national governments and increasing Chinese exports, said Darío Germán Umaña Mendoza, a retired economist from the National University of Colombia.

“China has a clear strategy for Latin America, but collectively, Latin America has nothing,” Umaña Mendoza said.

That’s the biggest challenge for individual countries like Colombia, Umaña Mendoza said, noting that they don’t know how China’s growing influence will be a part of their own growth.