About two hours outside Mexico City, in Tenancingo, 67-year-old Lucio Alva Pastrana shows off his small parcel of marigolds, or cempasúchil as they’re called in Mexico. The bright orange buds peek out from the tangled green foliage.

“All this,” he says as he gestures to the plot of flowers, “it’s worthless.”

Pastrana is one of the thousands of flower farmers in Mexico who have seen their market contract — or vanish entirely — due to the pandemic. Typically, Día de los Muertos, or the Day of the Dead, which is celebrated over the first two days of November, is one of the most profitable times of the year. Many families buy dozens of flowers — marigolds in particular — to build altars at the graves of their deceased loved ones.

But in October, news broke that many cemeteries in Mexico would be closed to the public; COVID-19 cases are on the rise again and officials want to avoid large gatherings. 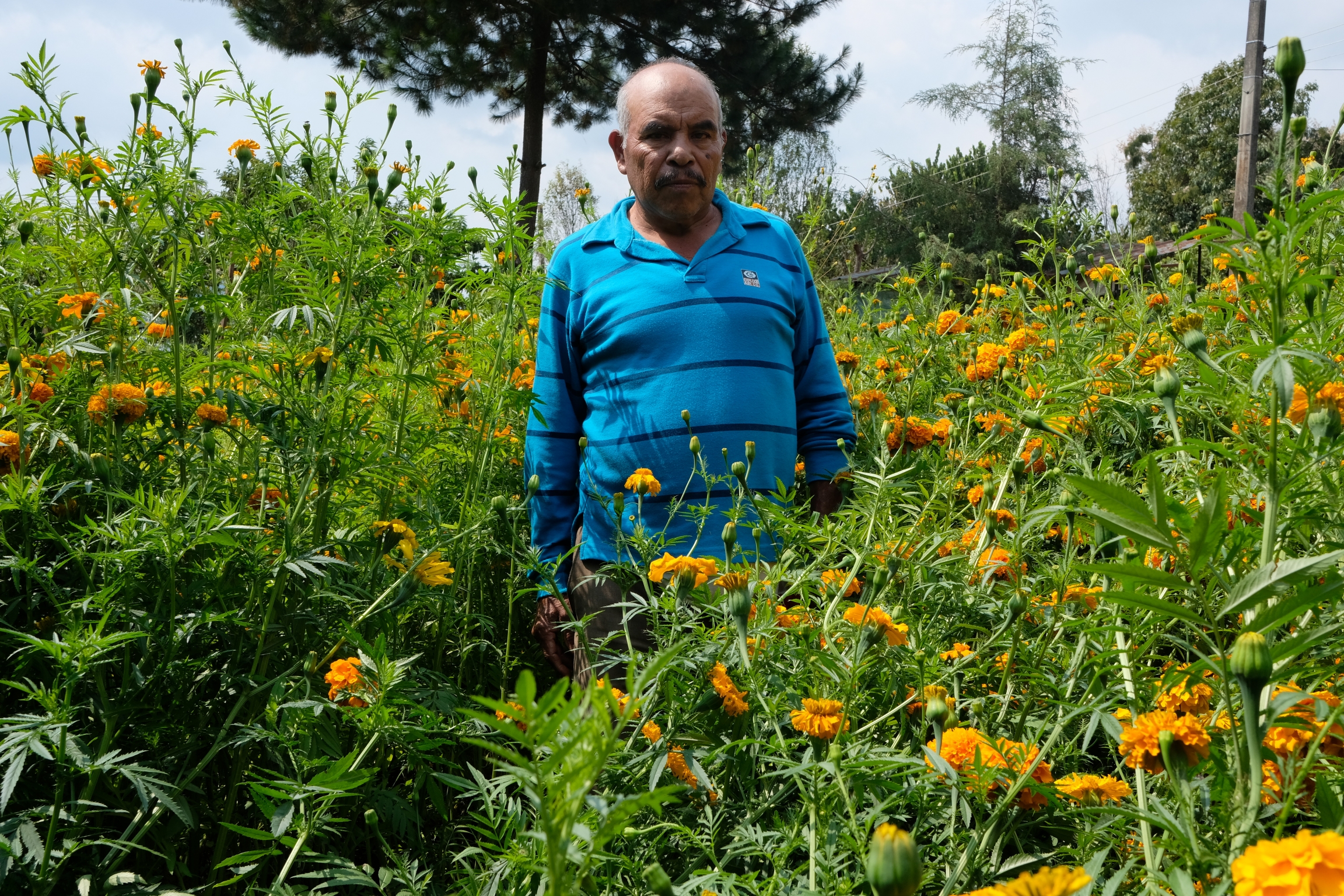 Lucio Alva Pastrana stands in his small parcel of marigold flowers. He says the price is so slow this year they're practically worthless.

The news was particularly bitter for farmers like Pastrana in the southern state of Mexico, a region often referred to as the floriculture corridor that provides two-thirds of Mexico’s flower production. Come harvest time, the hillsides are a patchwork of fluorescent crops, grown mainly by small, informal producers like Pastrana. Here, entire towns make a living off growing and selling flowers and families rely on the modest income to survive.

“The pandemic has affected the entire sector. ... We, the farmers who grow flowers, have been very affected because who are we going to sell to?”

“The pandemic has affected the entire sector,” Pastrana said. “We, the farmers who grow flowers, have been very affected because who are we going to sell to?”

Globally, the pandemic has not been kind to flower producers. In March, an estimated 400 million flowers were destroyed in the Netherlands in an effort to stabilize plummeting prices. In Colombia, the world’s second-largest producer, a report from the US Department of Agriculture found exports were effectively cut off due to the country’s strict lockdown measures.

Mexico may not be a major flower producer on the international market, but the effects on the domestic industry have been tragic. On Mother’s Day, many thousands of flowers were left to rot in the fields as marketplaces were shut down across the country. Farmers planted again in August, hoping that by fall, pandemic conditions would improve, but nonessential activity is still limited in most of the country.

Unable to recoup the cost of seed and fertilizer, farmers like Pastrana are slipping further into debt.

Pastrana says the price for marigolds this year is so low — between $2 to $4 per bundle, according to one estimate — that he’ll try and use his flowers to barter with his neighbors for other goods. Other farmers have taken to Facebook to try to sell their crops — and some are even giving them away.

About 90% of Mexico's floriculture is consumed domestically and demand coincides with several key holidays. Javier Jesús Ramírez Hernández, a professor of social sciences at the Autonomous University of The State of Mexico, has been studying the flower industry in Mexico for the last several years. He says he wouldn’t be surprised if as much as 80% of flower sales are lost this November, and the consequences could be long-term.

“[In the next 10 years], we may see the fields of flowers convert into fields of avocado trees since it’s more competitive at the moment."

“[In the next 10 years], we may see the fields of flowers convert into fields of avocado trees since it’s more competitive at the moment,” he said. 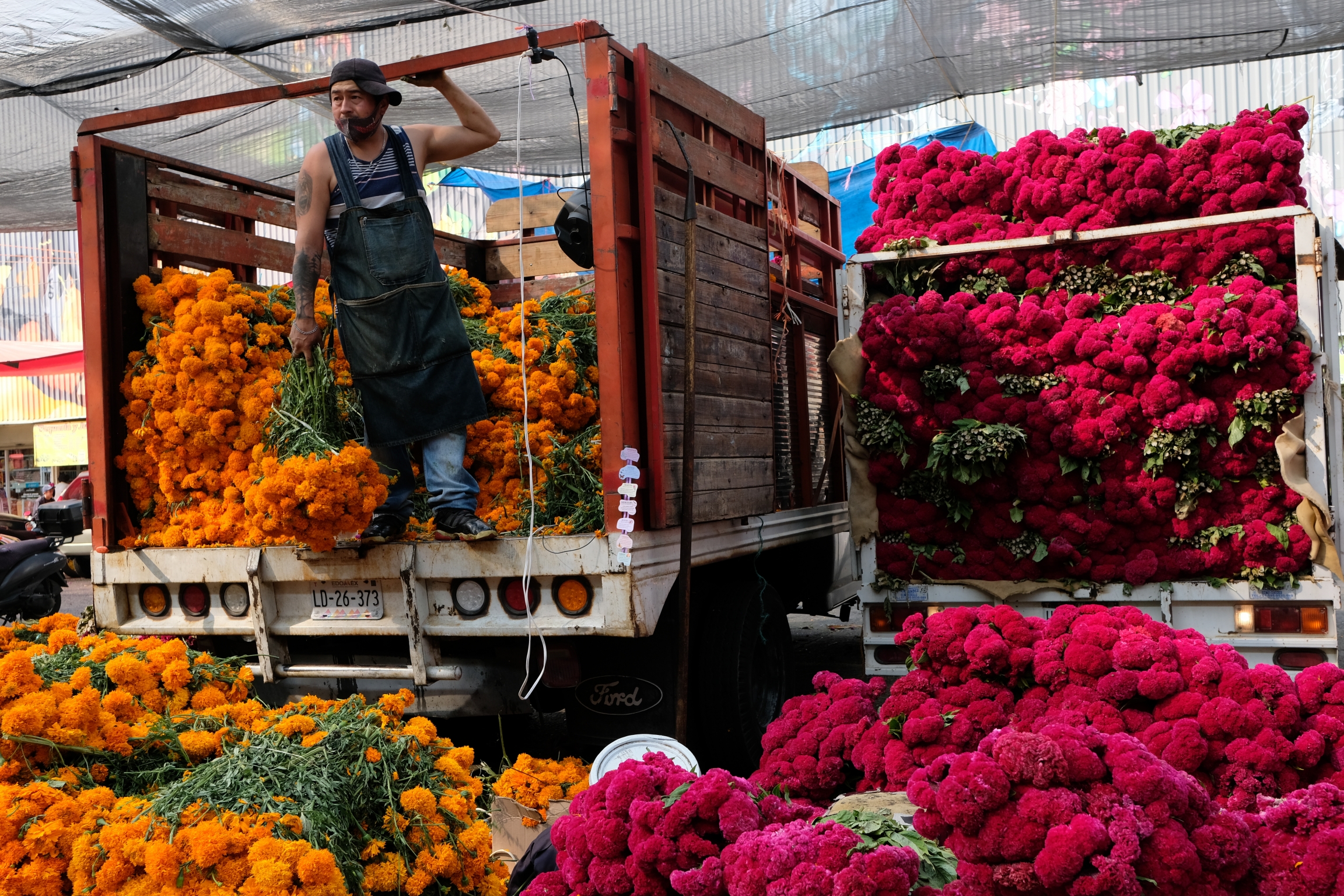 A vendor at the Mercado de Jamaica sells cempasúchil and terciopelo flowers used on altars for Día de los Muertos, or Day of the Dead.

Apart from around 200 large companies in the region, some of which export flowers to the US, Remirez says this corridor is home to as many as 12,000 small farmers who have no financial safety net. He expects some will have no choice but to migrate to the cities for work, while others switch to more lucrative crops.

Further down the corridor, Francisco walks by row after row of pink roses inside a giant white greenhouse. The World is only using his first name because Francisco’s success as a flower grower has made him a target of organized crime. Francisco has built his business from the ground up and now exports to the US, but at the moment he’s using credit to keep production going. He’s betting on better sales for Dec. 12, when Mexico celebrates the Day of the Virgin and roses feature prominently in the celebrations.

“I like to say that sometimes, [in this industry], you have to live for illusions."

“I like to say that sometimes, [in this industry], you have to live for illusions,” he said.

As one of the larger producers in the area, Francisco says the drop in sales brings an added pressure; he’s responsible for about 60 employees who need their jobs to support their families.

“We’ve had to reduce the work schedule to half days or remove a few hours. So far, we’ve avoided having to let anyone go,” he said.

Flowers are not edible, so Mexico’s government does not consider it an essential agricultural commodity. Therefore, it’s very unlikely that anyone in the industry — from the individual farmer all the way up to the large exporter — will receive any direct government assistance. That’s concerning, considering that plummeting flower sales have rippled through the economy, all the way to Mexico City.

At the Mercado de Jamaica, one of the main points of sale for flowers in the country, many vendors agree that this year sales are particularly slow because families are preparing smaller altars at home. 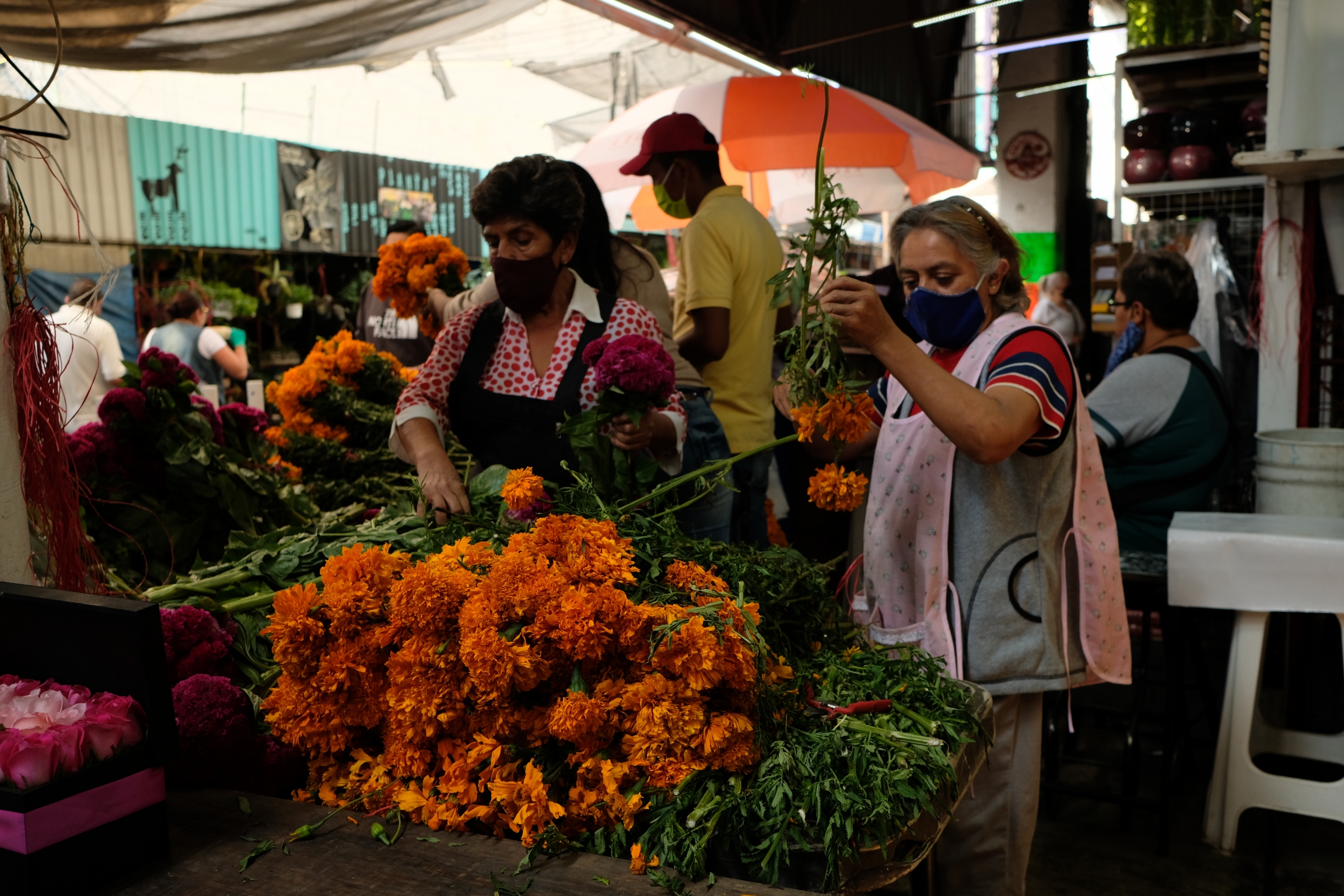 In his white face mask and glasses, flower seller Antonio Ruiz stands next to a mound of marigolds that were harvested yesterday and arrived at his stall this afternoon. He says the fresher they are, the stronger their aroma — a sweet and spicy scent said to guild spirits to their altar.

As shoppers pass by, Ruiz tries to entice them into buying a bundle but few take the bait. Like many flower vendors, Ruiz was counting on this season to recoup the losses he suffered on Mother’s Day when this market was closed during the citywide lockdown. Now, he’s priced marigolds at a discount in the hope that he can sell enough to break even. He says business this year is complicated.

“We’re not going to see the tradition that we usually would have of families coming to the market together to pick out their flowers [for the altar]."

“We’re not going to see the tradition that we usually would have of families coming to the market together to pick out their flowers [for the altar],” he said.

For Mexico, the irony is that in a year of so much loss, many are unable to celebrate those who have died. Ruiz, who lost his father to COVID-19, says this time of year is supposed to be healing and nostalgic.

“But we can’t even visit [our dead] in the easiest and closest way that we know how — when they're 3 meters underground,” he said.