Growing up as a queer person, photographer Wyn Wiley was often told the great outdoors is for everybody, but only if you look and act a certain way. Now, he works to break down this barrier.

His drag queen alter ego, Pattie Gonia, hikes in 6-inch heels and a full face of makeup and posts pictures of herself on Instagram to encourage everybody, regardless of gender identity and sexual orientation, to get out and enjoy nature. She has amassed some 300,000 followers on Instagram.

Related: The US lags in global LGBTQ rights. Can the election change that?

Wiley says he grew up in Nebraska with nature all around him and was active in the Boy Scouts, which also gave him lots of time in the outdoors. Later, after he came out, he became “fascinated by the freedom he feels dressing in drag.” Now, he says, he feels lucky that his “passions get to intersect so much.”

"When I do drag in the outdoors, I feel the most me. And yes, that means literally backpacking in high heels, which you can think is a very silly and stupid and dangerous thing, but so is riding a mountain bike down a mountain at 45-miles an hour." 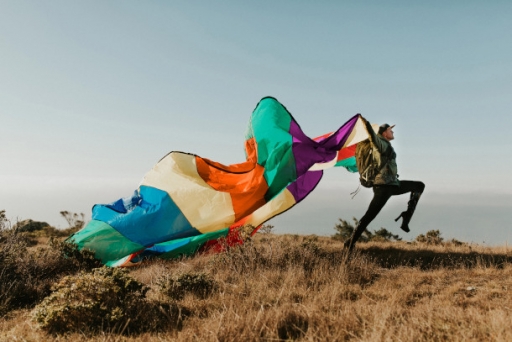 “When I do drag in the outdoors, I feel the most me,” Wiley says. “And yes, that means literally backpacking in high heels, which you can think is a very silly and stupid and dangerous thing, but so is riding a mountain bike down a mountain at 45-miles an hour. So, you know, pick and choose your danger in the outdoors. I just choose to wear some 6-inch heels.”

“It's really beautiful for me to also be very feminine and be in touch with my femininity in a space I feel is very feminine,” Wiley adds. “I feel like we're told through media — through the narratives and the archetypes of the outdoors — that the outdoors are a very masculine space. They're there to conquer. I enjoy being with them, and I enjoy making art with them. It totally changes my experience with the outdoors when I'm in drag.”

Pattie Gonia gets mixed reactions from other people out on the trails who might not be expecting to run into a drag queen.

Related: LGBTQ candidates made historic wins in US elections this week

"I'm fascinated with how much even just wearing heels, even if they're not on for drag, but just hiking in heels, is such a disarming moment."

“I'm fascinated with how much even just wearing heels, even if they're not on for drag, but just hiking in heels, is such a disarming moment,” Wiley says. “It’ll catch people off guard. [They’ll] notice the heels and they'll light up inside and they're like, ‘Oh, my gosh, hi! Whoa!’ And it's always a conversation starter. It's not like you see people walking in 6-inch heels out in nature. But I think it's a really beautiful touchpoint to learn.”

Pattie has definitely experienced homophobia on the trail, too, but mostly she is “amazed at how often it's a positive interaction.”

Wily believes it’s important to see queer people in the outdoors, “because nature is so queer itself; because queer people are people, too; because…the outdoors can be a place where we celebrate diversity, something that Mother Nature knows is absolutely key.”

“For the longest time,” he says, “I didn't see myself represented in the queer community because I'm not a person that's going to spend their Friday or Saturday night in a bar or club. I'm not dogging that, I'm just saying I'm gonna be out on the trail. I'm gonna be out camping. So, I've been really thankful for this journey with Pattie to really remind me how much we can create queer community in the outdoors and how important that is and how many queer people were already out there in the outdoors. We just didn't have as many campfires to kind of gather around.”