The battlefields of Nagorno-Karabakh lie hundreds of miles away from Yerevan, the Armenian capital, but the intense mobilization to support the war effort against Azerbaijan seeps into every facet of society.

In the last month, Azerbaijani forces have captured several Armenian territories and bombarded Nagorno-Karabakh. With three failed ceasefire agreements, many Armenians are volunteering to help the troops and attending protests to demand answers.

On a Saturday morning in a downtown school in Yerevan, a classroom has been transformed into a military accessory workshop. Teams of women of all ages weave together camouflage nets to drape over troops, tanks and the cars of volunteers who ferry up supplies to the front line. 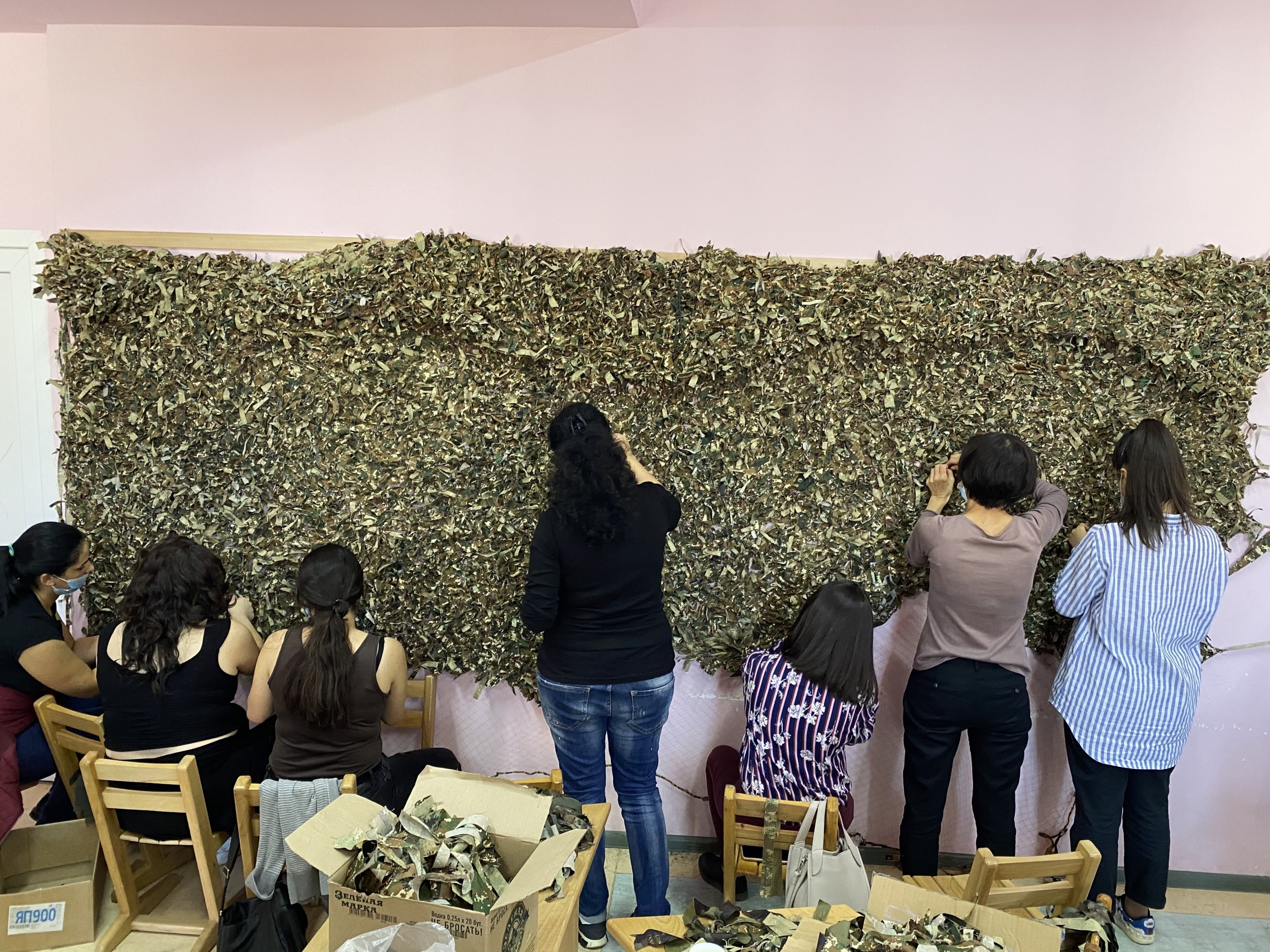 Women volunteers construct camouflage nets to be used on the Nagorno-Karabakh frontlines.

Mariam Margaryan lost her job as a tour guide when the clashes began in late September but immediately offered to volunteer. In Armenia, with fewer than 3 million people, the war touches most people directly. Margaryan already lost a friend to the conflict, and her brother is serving in the Armenian military.

“Now, everyone is united, we are together. ...We share grief and hug people we have never met [before].”

“Now, everyone is united, we are together,” Margaryan says. “We share grief and hug people we have never met [before].”

Nagorno-Karabakh officials say that 1,166 troops and 39 civilians have been killed since Sept. 27, when the recent clashes began. Azerbaijani authorities have reported 90 civilian deaths while military losses are not disclosed.

Nagorno-Karabakh is widely considered under international law to lie within Azerbaijan. But ethnic Armenians who govern the area have rejected Azeri rule since 1994, following a previous war between the two countries. By the end of that conflict, which left over 30,000 dead, Armenia had also captured several Azerbaijani territories around Nagorno-Karabakh, which act as a buffer zone, but remain contested.

In the Yerevan classroom, the tiny chairs and brightly colored paintings combined with the busy assembling of material to be used in war creates a jarring scene. Some children also assist in the tying together of the camouflage ribbons.

Irina Minasyan, a local parent, says that it’s impossible to shield young ones from the harsh realities of war.

“They have friends that have passed away,” Minasyan explains. “It’s not easy to speak about, but we had a student who graduated a year ago and last week was his funeral. All of us have brothers and friends [on the battlefields]. It affects everyone.” 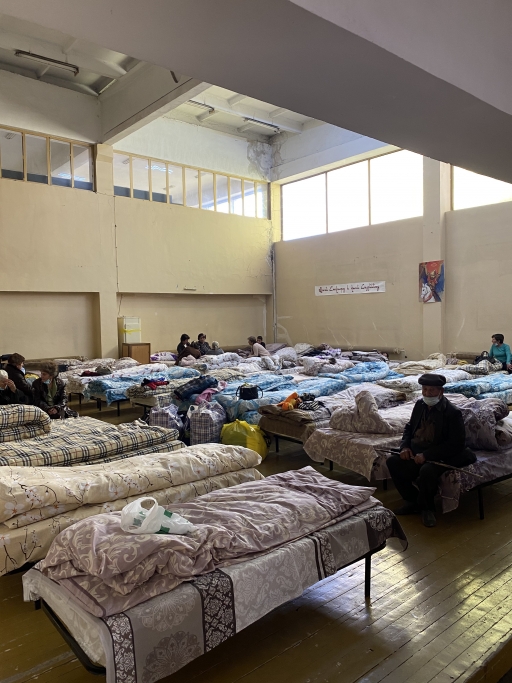 A government-run transit center on the outskirts of Armenian capital Yerevan accommodates refugees from Nagorno-Karabakh.

The Azerbaijani bombardment of towns and villages in the de facto independent state of Nagorno-Karabakh has forced tens of thousands of mainly women, children and elderly people to flee into Armenia, while the many men stay behind to fight. Many of the displaced arrive at a Soviet-era community center on the outskirts of Yerevan to register for accommodation.

Hayk Muradyan, from Armenia’s Ministry of Labor and Social Affairs, manages the operation.

“Some of them have had their houses destroyed by the bombs, and some still have trauma from the explosions but all of them are sure they will be back as soon as we win the war,” Muradyan explains, staring earnestly over his face mask, adding, “and we will definitely win.”

Inside the shelter, exhausted mothers and old villagers with walking sticks slump on rows of camp beds. Henrik Hakopyan, 80, dressed in a denim jacket and camouflage baseball cap, told The World that he recently escaped the province of Hadrut, which days later would be captured by Azerbaijani forces.

"I was at the doctor’s [office] when our forces told us to evacuate, there wasn’t even time to go back home. Everything I collected over the years I had to leave behind as well as money, clothes, my passport even. Thousands have been killed and displaced...so why does the world stay silent?”

“I was at the doctor’s [office] when our forces told us to evacuate, there wasn’t even time to go back home. Everything I collected over the years I had to leave behind as well as money, clothes, my passport even. Thousands have been killed and displaced,” Hakopyan holds out his arms, “so why does the world stay silent?” 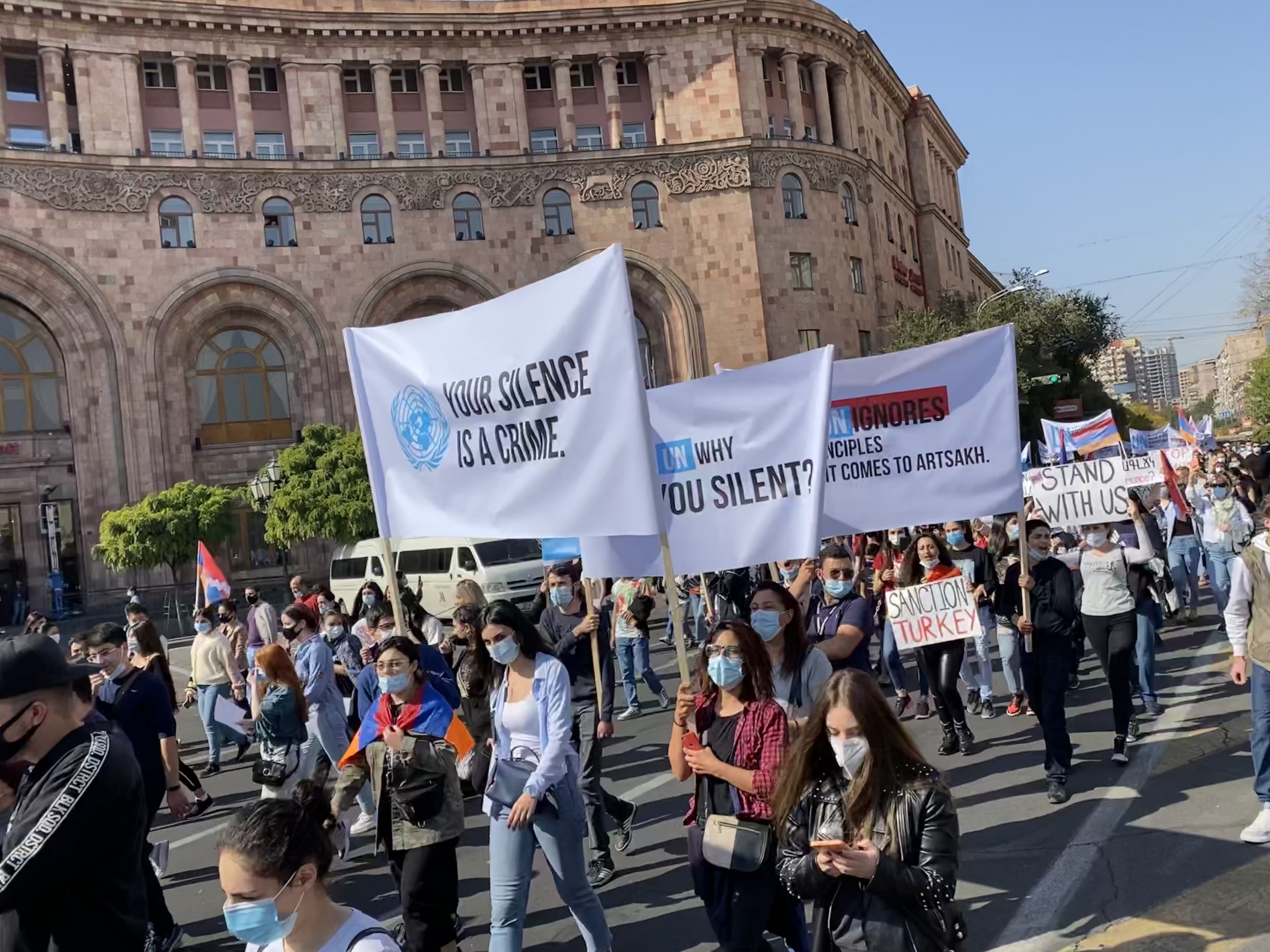 Anger is brewing in Armenia over the perceived lack of attention being paid to the conflict in Nagorno-Karabakh by the international community. Last week, thousands marched through Yerevan’s Republic Square to the United Nations headquarters to demand answers.

"Destinies are being ruined. ... These soldiers are 19-, 20-year-old boys and they had dreams, but they are dying. It’s not that they chose to be soldiers, they have to protect and defend.”

Protester Seda Manasyan, 30, works in the hotel sector but was too distracted to stay in the office. “Destinies are being ruined,” she said angrily. “These soldiers are 19-, 20-year-old boys and they had dreams, but they are dying. It’s not that they chose to be soldiers, they have to protect and defend.”

For some Armenians, this isn’t their first brush with bloodshed. Elena Dadayan-Romanova was born in the Azerbaijani capital of Baku during the Soviet Union during times when both nationalities lived in each other’s countries. But by the late 1980s, the majority in Nagorno-Karabakh started voting to be united with Armenia, sparking ethnic cleansing and pogroms between Armenians and Azerbaijanis that caused Elena’s family to flee.

Three weeks ago, she escaped the shelling of Stepanakert, the de facto capital of Nagorno-Karabakh, and is displaced again. Now she rents an apartment in Yerevan with her daughter, elderly father-in-law and five grandchildren.

“When I heard the first explosions … early in the morning, we thought it might be military training,” Dadayan-Romanova recalls. “But then we went out on the balcony and saw the smoke rising [and] we headed for the basement.”

In the following days, volunteers from Yerevan came to the border to help evacuate civilians. Initially, Elena’s daughter didn’t want to leave.

“I told her that I have seen this before, I know how it goes and I forced her to come. We don’t know how long we’ll be here and we can’t make plans. All of our thoughts are with our husbands and brothers.”

Despite heavy military losses and devastated civilian areas, there seems no sign of war fatigue on either side. But with an emerging refugee crisis and a resurgence in COVID-19 cases, Armenia is about to enter a long and troubled winter.