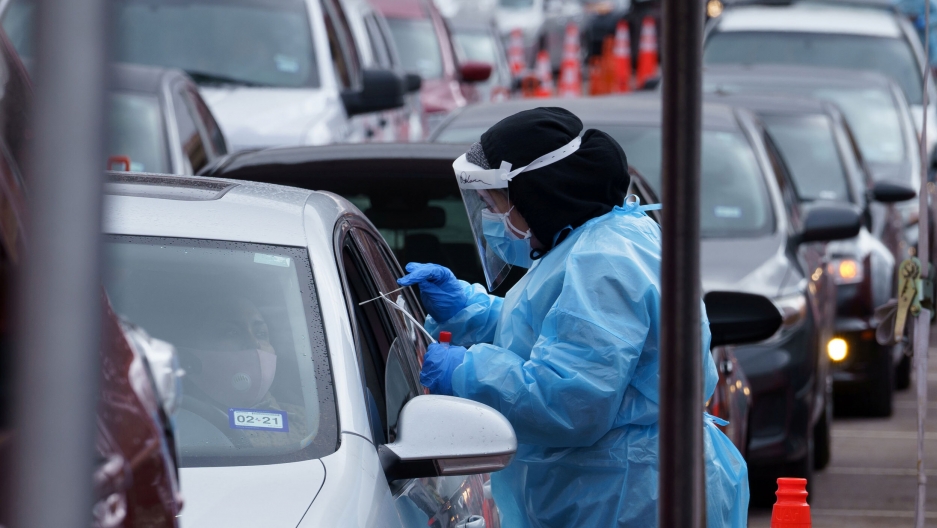 A nurse takes a swab sample at a drive-through coronavirus test site at the University of Texas El Paso, in El Paso, Texas, Oct. 27, 2020.

A record surge in COVID-19 cases is stretching hospital resources in the adjacent border cities of El Paso, Texas, and Ciudad Juárez, Mexico. Local experts say that the coronavirus spike can be attributed to an increase in family gatherings as younger people are going out to stores or work and often live in the same households with older generations.

Confirming the interconnected nature of the two cities on either side of the Rio Grande, the uptick is part of a massive wave across the US and beyond. Throngs of people routinely travel back and forth to see relatives or do their shopping. El Paso authorities have imposed a two-week lockdown on residents and a 10 p.m. curfew as they prepare for the worst — with makeshift COVID-19 wards at the convention center and tents outside the University Medical Center of El Paso.

Mexican President Andrés Manuel López Obrador has declared a three-day mourning period for victims of the coronavirus as the country observes Day of the Dead holiday this coming weekend. Many outbreaks north of the border, in Canada, emerged after Canadians gathered Oct. 12 for their Thanksgiving, a stark warning most immediately for Americans going into Halloween, and Turkey Day.

And on the other side of the Atlantic Ocean, Catholic bishops in Belgium said in a letter ahead of All Saints' Day that “we can win the battle against the coronavirus only if we do it together.” This week, the European Centre for Disease Prevention and Control said Belgium had the highest 14-day number of cumulative cases per capita on the continent.

As millions of Tanzanians vote in the country’s general election, internet users have reported that WhatsApp and Twitter are being restricted. President John Magufuli is running for reelection, and his primary challenger is Tundu Lissu of the largest opposition party, Chadema. Violence also broke out in the semi-autonomous Zanzibar archipelago as police arrested an opposition leader.

And, satellite images show that Iran has begun construction on an underground centrifuge assembly plant at the Natanz nuclear enrichment facility following an explosion last summer that destroyed the previous plant. Nonproliferation analysts at the Middlebury Institute of International Studies at Monterey confirmed the excavations at the site, and the International Atomic Energy Agency said its inspectors were aware of the construction. Ali Akbar Salehi, head of Iran’s Atomic Energy Organization, said last month that the sabotaged building was being replaced by one “in the heart of the mountains.” 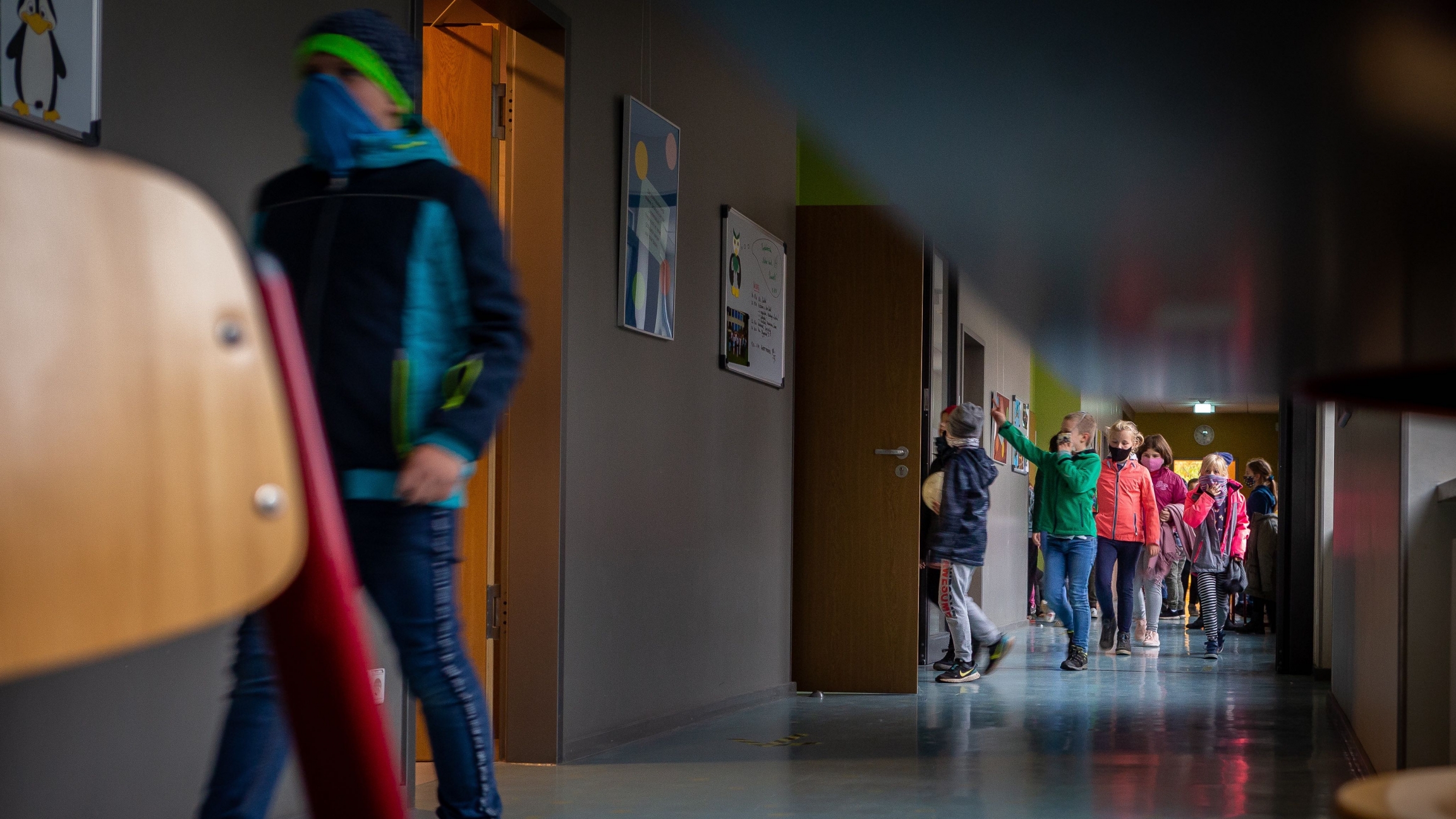 Students return to class after recess at Weimar Schöndorf primary school in Germany.

Although the Bavarian government, in the south, has ordered widespread lockdowns in districts along the Austrian border amid a surge in COVID-19 cases, schools in most of Germany, generally speaking, are back to normal. At least for the moment. 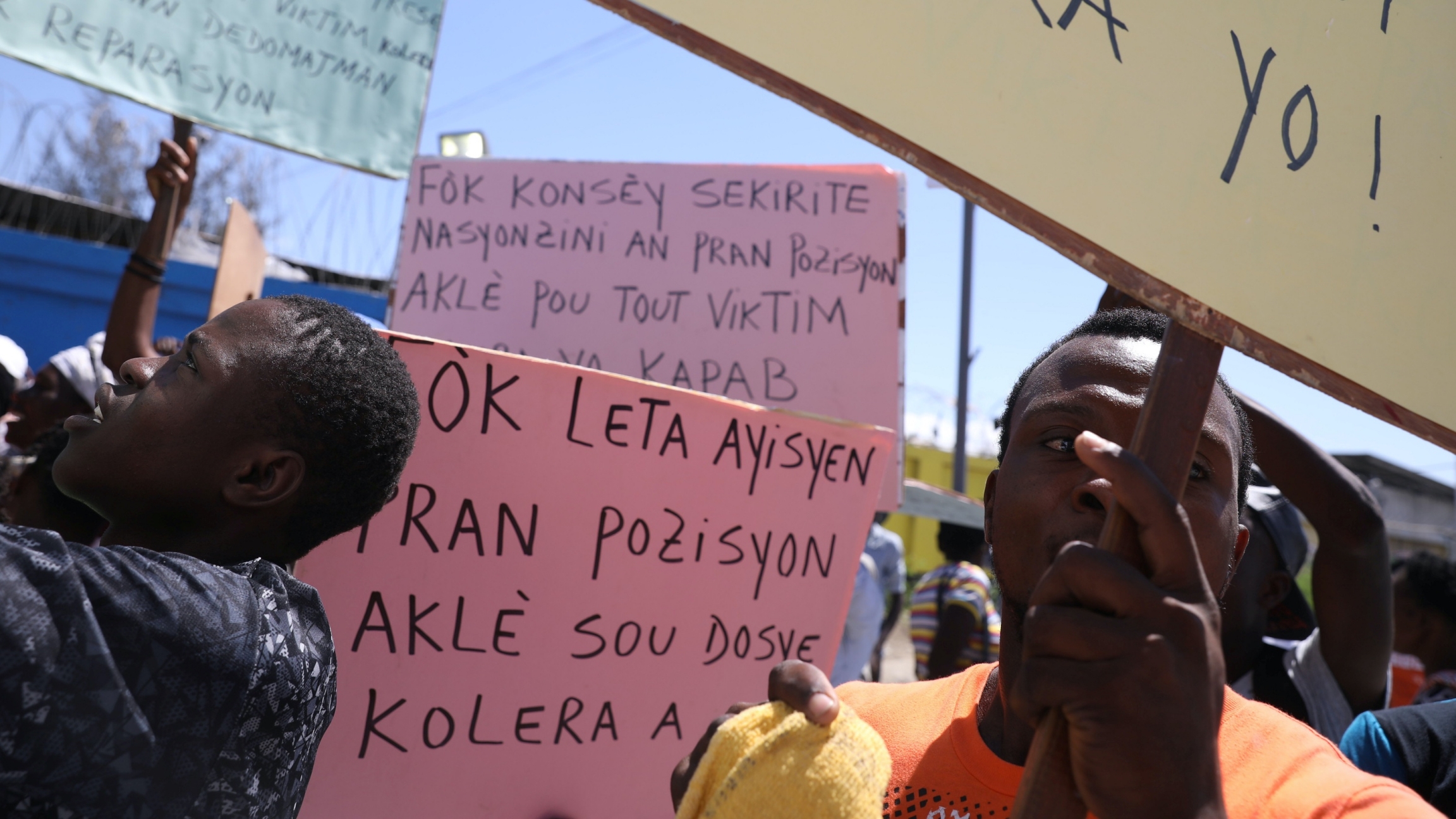 Ten years ago, sewage from a UN peacekeeping mission's base in Haiti contaminated a major water supply. The resulting cholera epidemic killed over 10,000 Haitians. Beatrice Lindstrom, a human rights attorney who was in Haiti in 2010 to help earthquake survivors, told The World's host Marco Werman that “cholera hit when Haiti was already in a state of immense crisis.”

“I'm afraid that the way that the UN has handled this so far has amounted to an inadequate act of charity,” Lindstrom said.

"The families who lost loved ones to cholera who continue to suffer both living in poverty and struggling with the ongoing impacts of cholera really have not received any meaningful assistance from the United Nations.”

Despite unrest in Mali and a pandemic, members of the band Songhoy Blues are optimistic. They are hopeful about the next generation of young Malians — and that the world will pull through the coronavirus pandemic. It may be a strange time for Songhoy Blues to release an album called “Optimisme.” But for singer Aliou Touré, the timing couldn't be better. 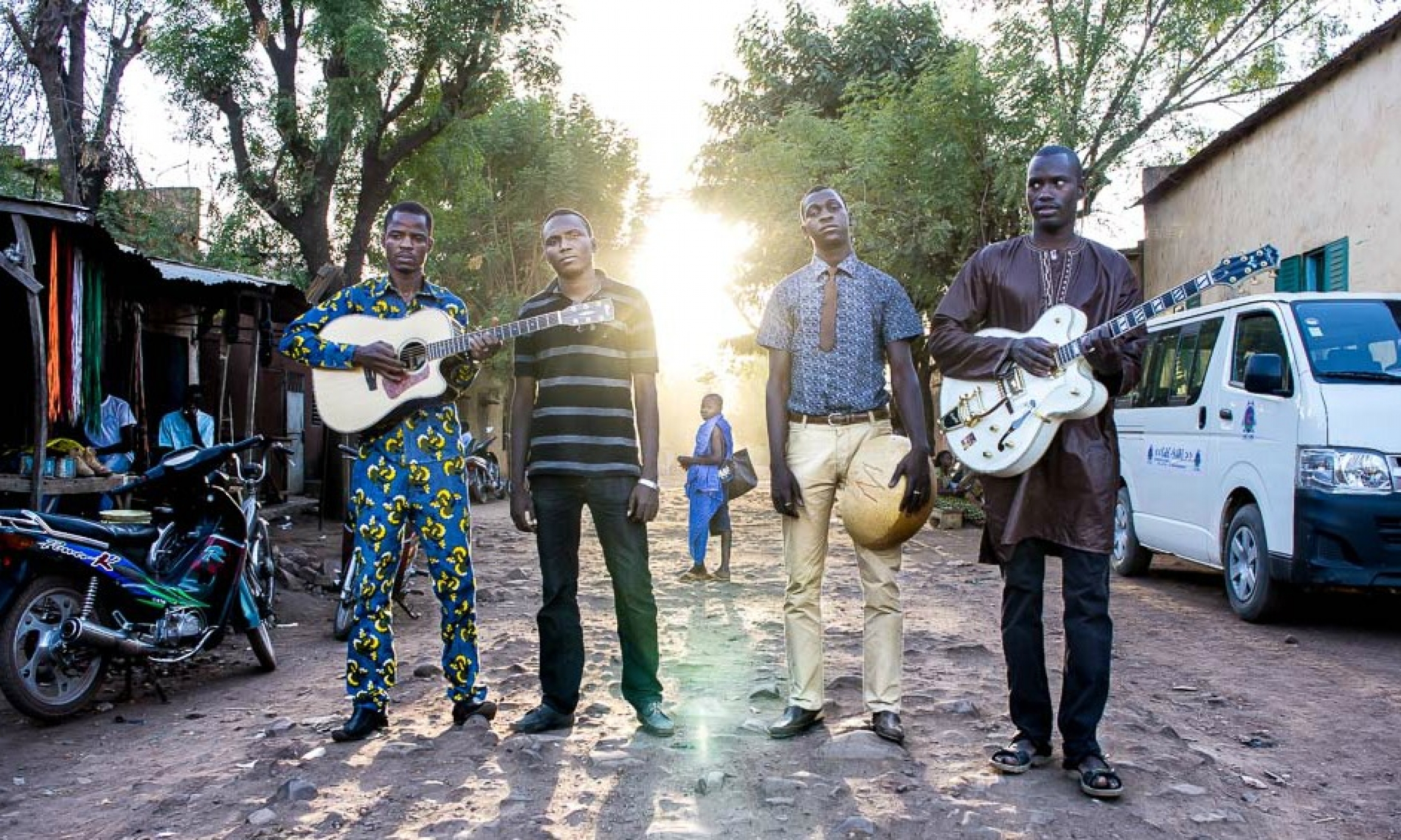 Listen: Protesters take to the streets of Poland over abortion court ruling 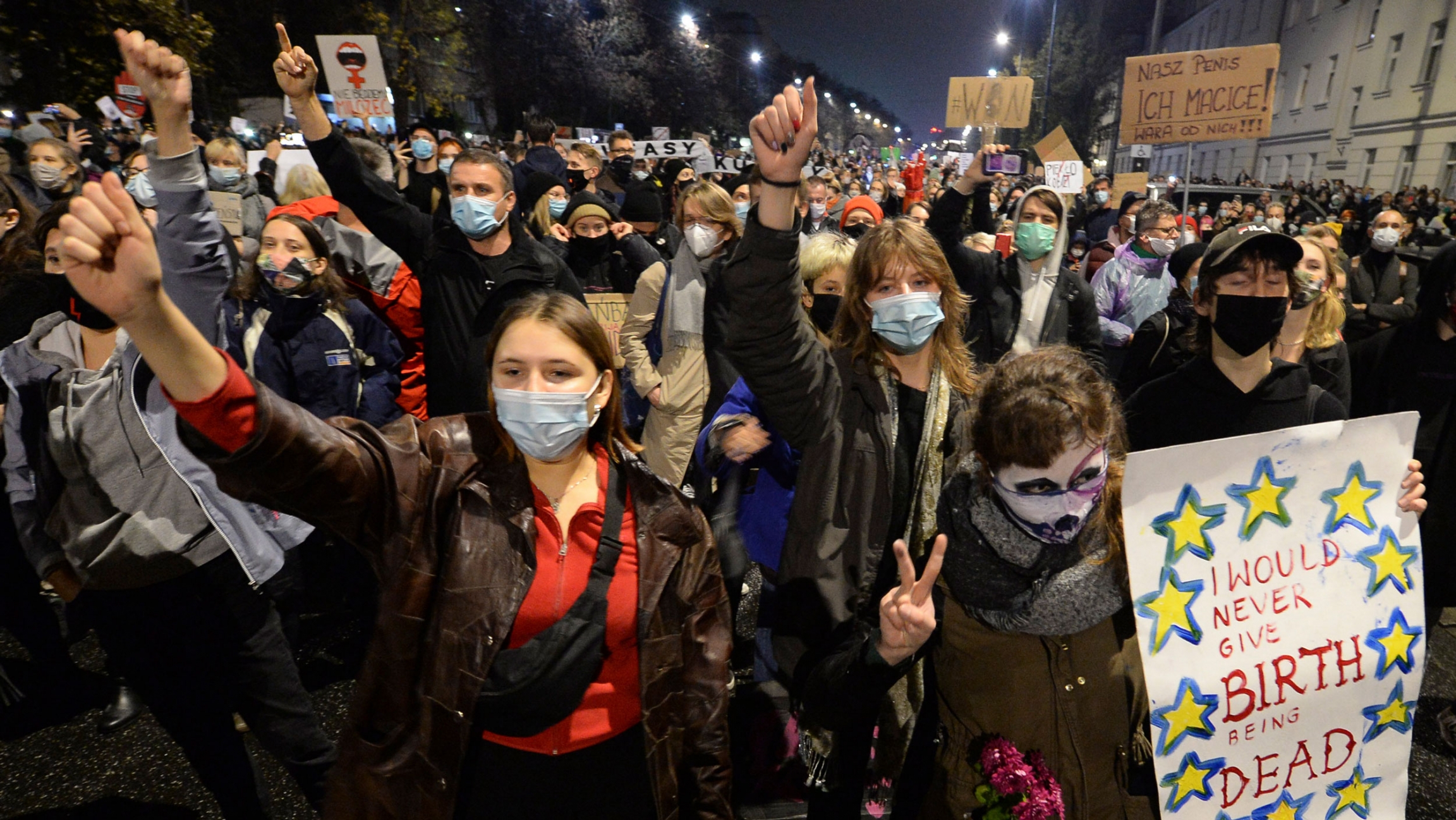 A crowd gathers outside the house of the Polish conservative ruling party leader, Jaroslaw Kaczynski, protesting a court decision that declared abortions of fetuses with congenital defects unconstitutional, in Warsaw, Poland, Oct. 23, 2020.

For five days straight, thousands have taken to the streets of cities across Poland to protest a court ruling on abortion. The country’s Constitutional Tribunal last week outlawed abortion in all but the most exceptional of circumstances. And, Germany has been pretty successful containing the coronavirus and also getting students back into classrooms. But in southern Germany, two counties are going into lockdown because cases there are spiking again. Also, Sacha Baron Cohen's iconic character Borat has been at the center of many controversial moments. Now with a new "Borat" film out, Kazakhstan has embraced the fictitious Kazakh journalist’s catchphrase: “Very nice” and turned it into the country’s tourism slogan.