Editor’s note: This story was produced in partnership with the Pulitzer Center on Crisis Reporting.

Before going out for recess on a drizzly, gray, October day, kids at a primary school in Weimar, a city in Germany’s Thuringia state, put on boots, raincoats, hats and finally, their masks.

Wearing masks in the hallways is about the only visible measure against the coronavirus that is currently in force here. Students march right past duct-taped arrows on the floor — an early attempt to control traffic and keep everyone spaced out. 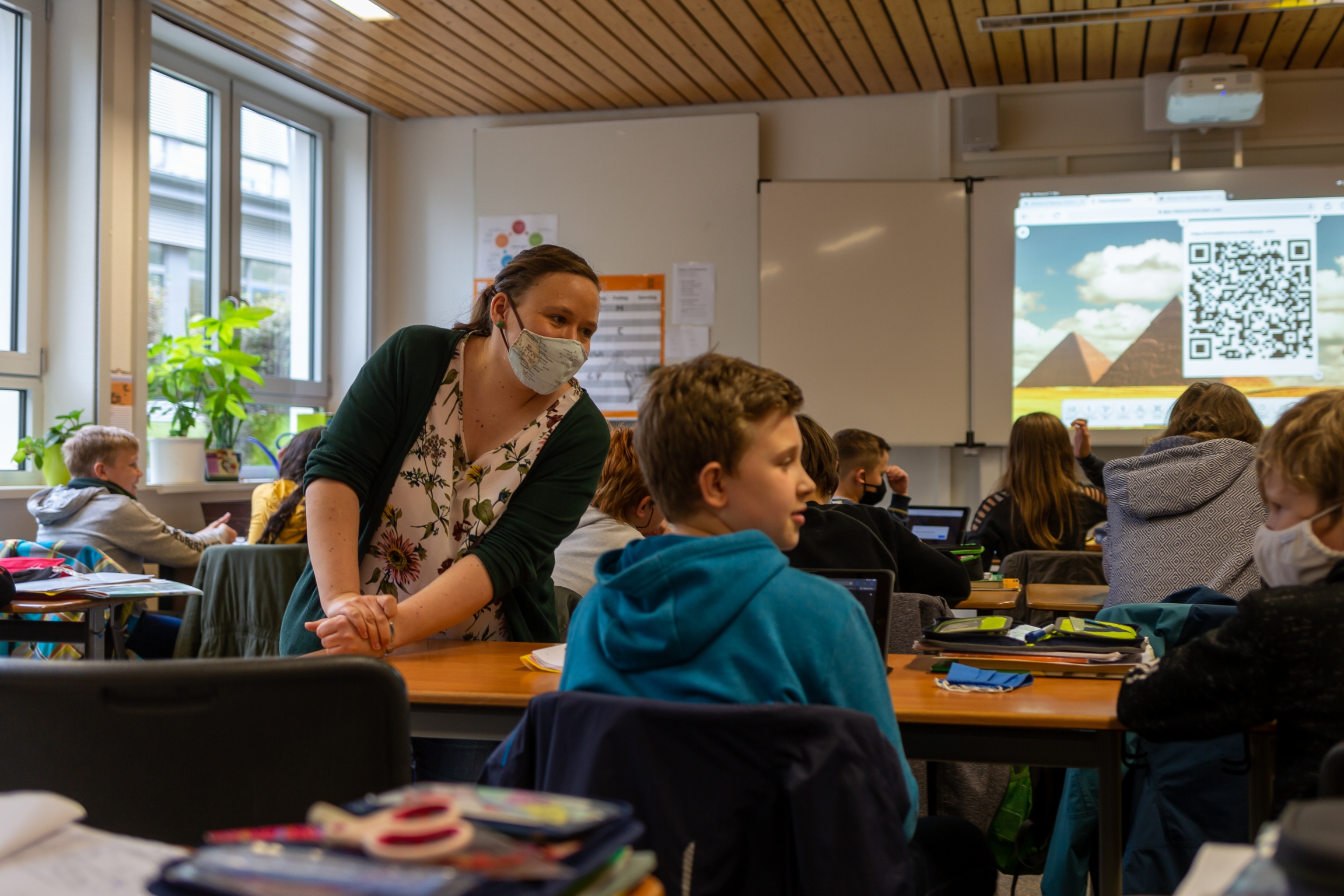 Teacher Inga Deppa works with students in an English class at Jacobishule in Kalletal, Germany. Masks were optional for students when they were seated at their desks but the regional health authority has since tighten mask rules for older students.

Although the government of Bavaria, a state in Germany's south, has ordered widespread lockdowns in districts along the Austrian border amid a surge in COVID-19 cases, schools in most of Germany are generally back to normal. At least for the moment.

Related: Is overtourism over? Travelers to Europe stay home due to COVID-19 restrictions.

Thuringia is using a color-coded system for responding to the coronavirus in school. Green means normal. Yellow means distancing restrictions. And red means quarantines or closures.

“Our school is green but other schools in Weimar are yellow and red, so far. And yeah, we hope we can stay green all the time.”

“Our school is green but other schools in Weimar are yellow and red, so far. And yeah, we hope we can stay green all the time,” said Christina Baumbach, a teacher at the Weimar Schöndorf school.

Other schools in the state have been more heavily impacted, triggering a growing sense of uneasiness for Baumbach and other educators now that daily cases of the coronavirus in Germany are hitting record highs.

“We have no idea what will happen then,” Baumbach said.

Germany’s public health system handled the early weeks of the pandemic relatively well, according to observers. The public’s adherence to government restrictions got daily cases of the coronavirus into the single digits, and that success led to some children returning to school even before the summer holidays. Schools opened in full beginning in August.

Doctors and government officials don’t blame schools for the recent upshot in COVID-19 cases, but rather, summer holiday travel and people gathering again for parties and dining out.

Germany continues to fare better than its European neighbors in the second wave of infections. Italy and Poland have both reduced the number of students attending high schools in person. Belgian schools are complaining about teacher shortages because of illness or quarantines.

Related: What Germany can teach the US about quitting coal

But government leaders in Germany are offering grave warnings about what’s to come if people don’t cut back on social life again. German Chancellor Angela Merkel is pleading with her country to stay home whenever possible to avoid more far-reaching lockdowns. Schools though, leaders say, will remain functional.

“In the end, the most important thing is that students can successfully complete their respective school years and finish school.”

“In the end, the most important thing is that students can successfully complete their respective school years and finish school,” said Helmut Holter, the education minister in Thuringia.

“We will have to learn to deal with the virus,” he added. “Therefore, I advocate keeping calm.”

Teachers' unions argue that the fall has been more chaotic than government leaders are letting on, with guidance coming at the last minute and without teachers’ input. 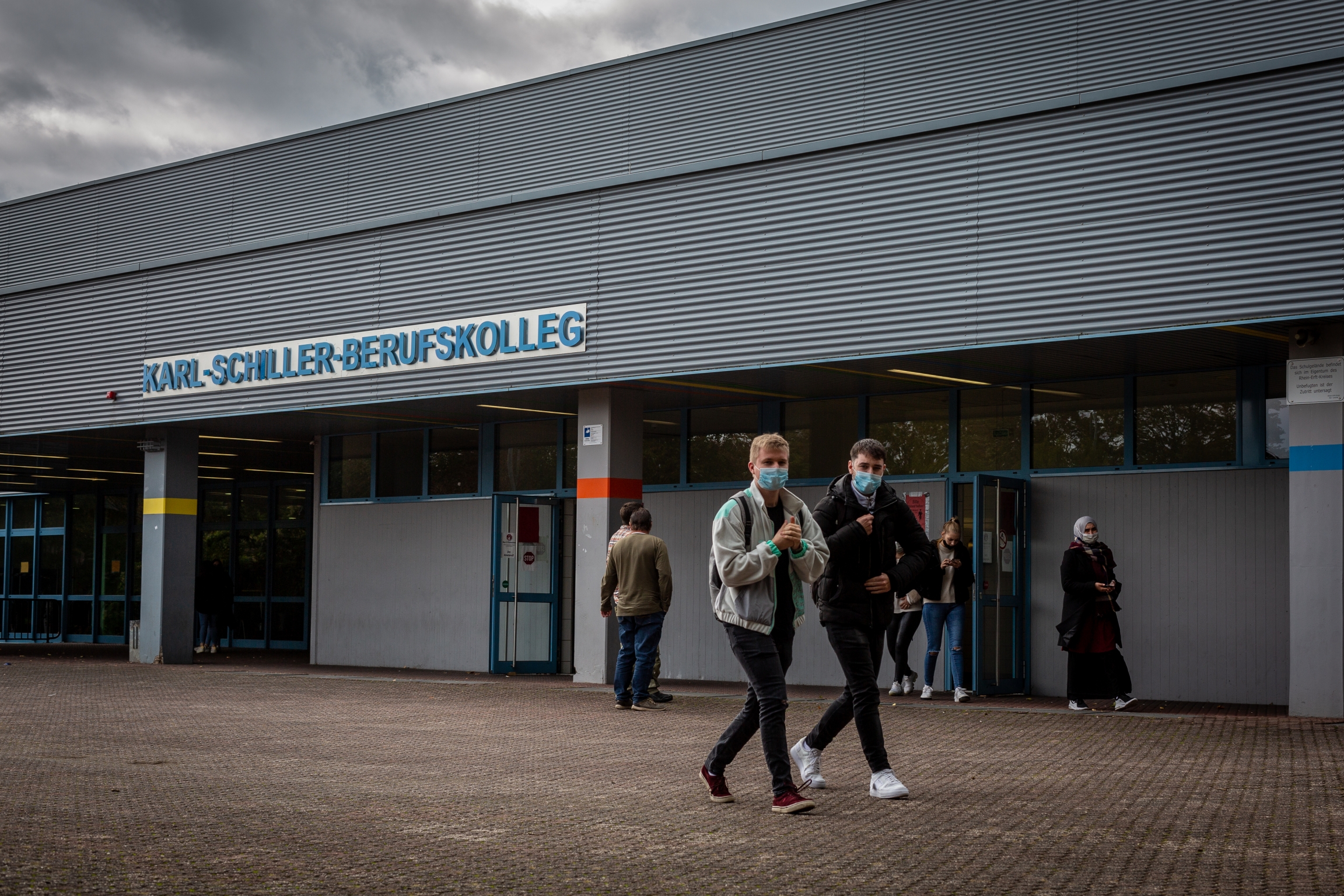 Students leave Karl-Schiller-Berufskolleg in Brühl, a secondary school outside of Cologne, Germany. Students are required by the school to wear masks on schools grounds.

Ample testing and thorough contact tracing have so far kept school disruptions to a minimum, impacting just a few students or a single class for a few days or weeks. But health agencies in many places now admit they’re overloaded by the spike in cases.

Ventilation is the 'be-all and end-all'

The dream of a successful winter of educating students here may instead be floating in the breeze. The long-standing German practice of opening windows to ventilate a room is now an official COVID-19 policy.

Ventilation, or lüften in German, “remains the be-all and end-all,” said Stefanie Hubig, the education minister in the state of Rhineland-Palatinate and president of Germany’s Conference of Education Ministers.

But as the cold weather sets in, teachers are worried about the balance between air circulation in their classrooms and students losing feeling in their fingers and toes.

The Environment Ministry recommends that windows be opened three times an hour.

Christin Reckers, a student at a secondary school in Osnabrück, says it’s already particularly chilly in some of the mobile classrooms that they have.

“They're very cold and sometimes the heating does not work, especially in our English class. So, we are freezing, like hell, basically.”

“They're very cold and sometimes the heating does not work, especially in our English class. So we are freezing like hell, basically,” Reckers said.

Health agencies are telling students to bring blankets and extra layers to school with them.

“People who are freezing won’t learn very well,” said Mathias Scheib, a teacher at a secondary school near Cologne who uses an app on his phone to track opening and closing windows.

Research in Germany and elsewhere shows person-to-person infections inside schools is very low, making experts optimistic about this school year.

Immunologist Michael Meyer-Hermann was skeptical about letting students return to school en masse, but at this point, he says he’ll gladly admit that he was wrong and that things are going well.

But, he says, if community spread continues to rise, students won’t remain untouched without significant changes in their behavior.

“They have many, many more contacts, and real contacts. They are just hugging all the time and doing whatever,” he said. “So even if they are less infectious there is still a big danger because of the number of contacts.”

Face masks are again mandatory for students inside classrooms in several German states as students return from two-week fall vacations, something the country’s student union objects to along with the open windows.

Meyer-Hermann says that as long as schools are not the sources of new outbreaks, he would rather keep them open.

Udo Michallik, secretary-general of the Standing Conference of Education Ministers in Germany, agreed: “The basic decision is right now to keep the schools open as long as possible.”