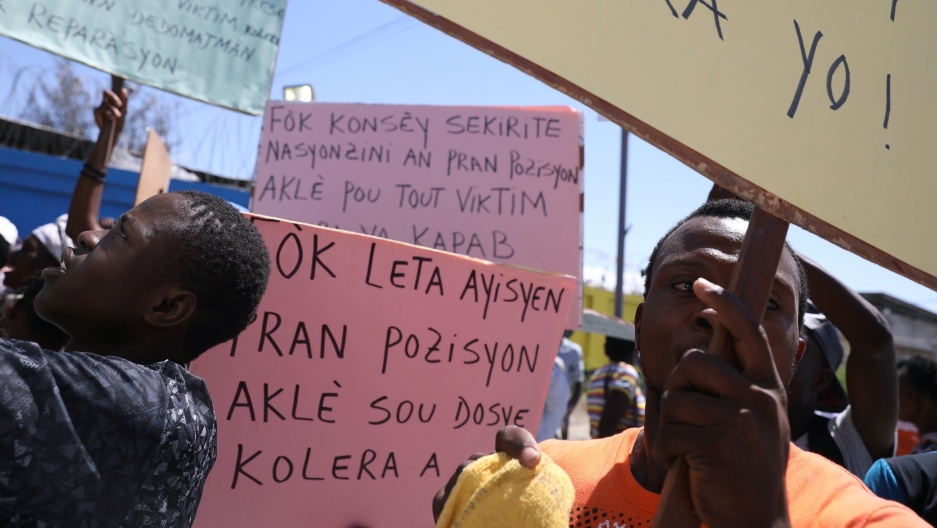 Just months after the earthquake struck Haiti in 2010, the country was devastated by an epidemic of cholera, a bacterial disease spread through contaminated water. A group of United Nations peacekeepers was later found to be the likely source when sewage from a UN peacekeeping mission's base contaminated a major water supply.

The resulting cholera epidemic killed over 10,000 Haitians. Nine months prior, a catastrophic earthquake had killed over 200,000 people and displaced at least a million.

Beatrice Lindstrom, a human rights attorney who was in Haiti in 2010 to help earthquake survivors, told The World's host Marco Werman that “cholera hit when Haiti was already in a state of immense crisis.” Yet, the UN “responded by denying responsibility by refusing to engage with the evidence that was clearly available to the public eye,” Lindstrom says. She has been helping Haitians to call the United Nations to account ever since and has filed a lawsuit against the UN. It took six years of advocacy for the UN to admit it played a role in the outbreak, Lindstrom said.

Related: Cholera spreads in Haiti in the wake of Hurricane Matthew

“I'm afraid that the way that the UN has handled this so far has amounted to an inadequate act of charity,” Lindstrom told The World. “The families who lost loved ones to cholera who continue to suffer both living in poverty and struggling with the ongoing impacts of cholera really have not received any meaningful assistance from the United Nations.”

In 2016, the outgoing Secretary-General Ban Ki-moon issued an apology for the UN's role in the cholera outbreak and committed to raising $400 million in assistance to victims and their families. But so far, they've only raised 5% of this fund, Lindstrom says. The entire situation has led to a “loss of trust" between Haitians and the UN, she adds.

On the 10th anniversary of the first case of cholera in Haiti, Lindstrom brought together UN officials and Haiti advocates to examine what lessons the UN should draw from the cholera epidemic: