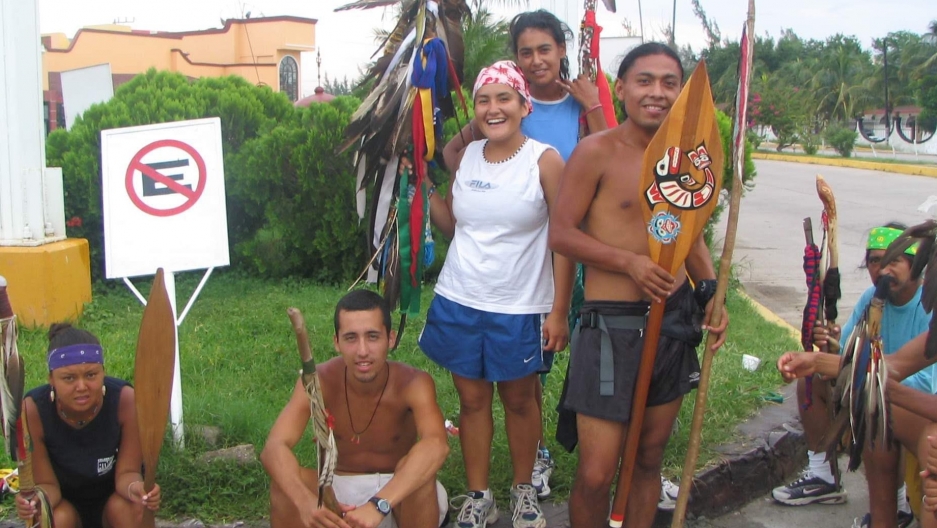 Every four years, a 6000-mile marathon run called Peace and Dignity Journeys unites Indigenous runners from all over North and South America, seeking to heal the wounds left from colonization and displacement. 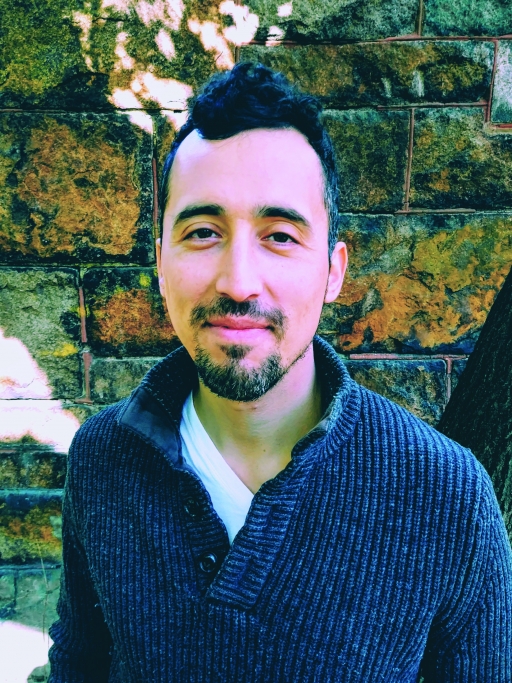 In his memoir, “Spirit Run: A 6,000-Mile Marathon Through North America's Stolen Land,” Noe Álvarez shares how the communal run helped him reclaim a relationship with the land and reconnect with his parents' migration and life of labor in the agricultural fields of the Northwest.

Peace and Dignity Journeys begin from opposite ends of the Americas: Chickaloon, Alaska, and Tierra del Fuego, Argentina. The ending point can vary year to year, but the two groups of runners meet somewhere in the middle.

Álvarez joined the run in 2004 as a way of honoring his parents' lifelong struggles working as immigrant fruit packers in the agricultural community of Yakima, Washington.

“They immigrated to the United States to be laborers in the state of Washington,” Álvarez says. “They worked in the apple orchards and in the fruit packing warehouses while I grew up. That was my reality. My reality was very much working on the land and being told by my father that the land was a bad thing. You needed to get out of it because of what it did to my people and what it meant to work on the land. So for me, my reality was getting out.”

Álvarez "got out” by accepting a full scholarship to Whitman College in Walla Walla, WA. But he struggled there.

“My whole life was always just, ‘Get into college, get into college,’” he says. "It was never, ‘What do you do once you get in?’ Because I don't think I ever believed that I would get into college. Here, I was finally able to save my family. That was the narrative: Going to college meant saving your family, making the money, making the... whatever. And then I finally got there and it was a liberal arts college and there was just so much catching up to do and it was a culture shock every step of the way. It was very difficult to sort of find my footing, find my ground. So when I finally got there, I sort of had a meltdown, especially since I felt like I was leaving my people — like, literally, I was gone.” 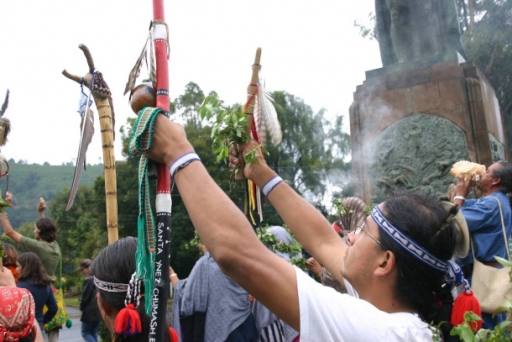 Peace and Dignity Journey runners gather to bless the ceremonial staff before they set out on their daily run.
Credit:

Álvarez saw in the Peace and Dignity Journeys marathon as an opportunity to reconnect spiritually with the land and “to be amongst other people who are talking beautifully about their emotions, about their flaws, about the things that needed to be worked through. I didn't have that going on. We just communicated through our hands and our hard work. So Peace and Dignity Journeys was a sort of a second chance for me to reconnect with the child that I couldn't be when I was younger.”

Each day of the marathon opens and closes with a ceremony based around a special staff each runner carries that day. The staffs represent specific prayers or lands or territories or are dedicated to rain or to people struggling with addiction or other personal problems.

"Every morning, you pick up a different staff, whichever one we wanted to pick up during the day, and when we carried those staffs, it was kind of a visual reminder of the burden that we carry and of the power that we carry and that we're not alone." 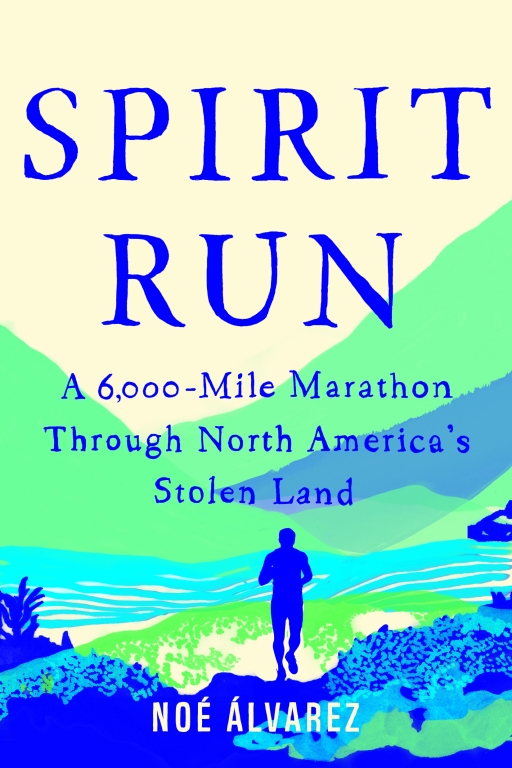 "Every morning, you pick up a different staff, whichever one we wanted to pick up during the day, and when we carried those staffs, it was kind of a visual reminder of the burden that we carry and of the power that we carry and that we're not alone,” Álvarez explains.

The runners sleep and eat with community members of territories in the region, “...talking with them and listen to what they had to say to us and what they wanted us to carry forward,” Álvarez says. “So, it was about just, literally, being messengers for the next community and telling them, ‘Hey, the community before wants you to know that they're with you and that they believe in you.’ And so we were just trying to build that fire.”

The run itself is grueling: long days, many miles, only a little food and inevitable injuries along the way. Álvarez says he had to keep reminding himself why he was doing it, and “it had to be something powerful, something stronger than just [burning] calories, stronger than just the competitive spirit.”

“Every day you were running through a different community and every day you were meeting people who had something very special to say, and that was why you wanted to run. You were literally running to the next story.”

“I think what kept me going were the stories,” he says. “Every day you were running through a different community and every day you were meeting people who had something very special to say, and that was why you wanted to run. You were literally running to the next story.”

Related: Native playwright Mary Kathryn Nagle resurrects her past to tell a story in the present

“There's a lot of pain and I don't want to shy away from that, but I think I wanted to find some beauty and some strength,” he adds. “I wanted to put out and amplify a voice for people who are going through the same things, who might find power in these narratives, where not everything is resolved. But that doesn't mean that the world is over, right? It means that we're all human. There's a lot of beauty in the messiness of human nature, right? 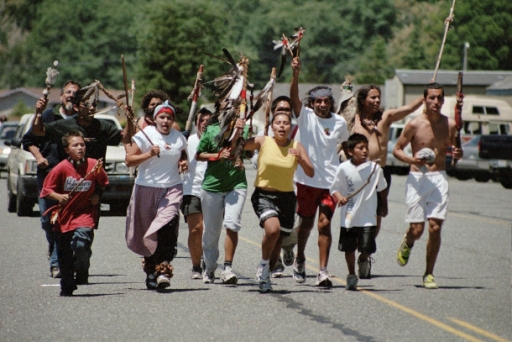 During the Peace and Dignity Journeys Marathon, which takes place every four years, each runner carries a ceremonial staff gifted by Native American communities. Noé Álvarez can be seen on the far right of this picture.

"I felt like I was in a different world, and that was the world that I wanted to be in — so profoundly connected with the land and having a conversation with it..."

Álvarez says that during the run, he was completely immersed in the land and with “people who have such respect for the land and celebrated the land and sang to the land and danced to it. I felt like I was in a different world, and that was the world that I wanted to be in — so profoundly connected with the land and having a conversation with it, as opposed to how I grew up with the land, which was working it to death, tilling it and harvesting it, using it as a product to cultivate apples — and just destroying the land, at times.

“Having the privilege of being born in the United States and being able to travel, I made it a mission to…figure out what the land would be to me,” Álvarez says. “And I wanted to create a conversation that will last for generations in my family. Now there's a conversation, a solid conversation about land in our family, reclaiming it in our story.”