Foreign policy experts are still debating what exactly Russia gained from its efforts to influence the 2016 US presidential election. Although it successfully unleashed internet bots, fake news and wild misinformation into American political life, Moscow in 2020 is strategically and economically weaker in many ways than it was when Donald Trump was elected four years ago.

With Russia’s troubles tied to the collapse in global oil prices, its government faces public opinion at home that is increasingly critical of President Vladimir Putin. And domestic opponents could be emboldened — even if deeply frightened — by the failed poisoning attempt on leading dissident Alexei Navalny.

Related: It's 'much riskier' now to stand up to the Kremlin

Here we examine the likely differences between a future Biden or Trump administration on US election meddling, the Ukraine scandal, relations with Putin, handling of the Navalny attack and tumult in Russia’s backyard.

The US remains traumatized and paranoid about continued Russian attempts to sway voters. While Moscow’s propagandists undoubtedly played a role in Trump’s 2016 victory, their full impact is still being debated.

Accusations about collusion with Russian operatives have dogged the Trump presidency since day one, despite Republicans often dismissing the allegations — which have resulted in jail sentences for several Trump associates — as a hoax.

An investigation by former Special Counsel Robert Mueller made public in 2019 ultimately proved Russian interference but did not have sufficient evidence of a conspiracy between Trump’s team and the Kremlin. And obstruction of justice charges failed to materialize due to the prohibition on indicting a sitting president. 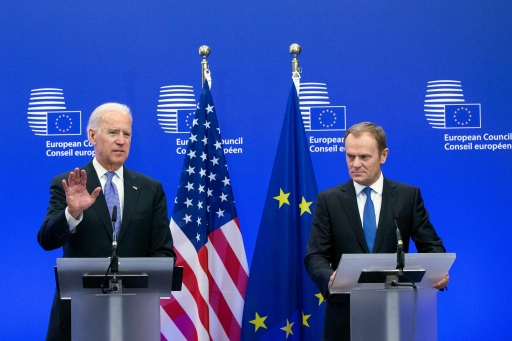 Former US Vice President Joe Biden holds a joint statement with European Council President Donald Tusk ahead of a meeting to discuss events in the Ukraine at EU Council headquarters in Brussels Feb. 6, 2015.

Yet Attorney General William Barr, in comments last month on CNN, sought to undermine the US intelligence community’s assessment that Russia is once again interfering in the election and boosting Trump’s reelection bid. Instead, he emphasized China’s attempts to promote Biden. But Barr also announced earlier this month that the findings of a probe investigating the origins of the FBI’s 2016 Russia inquiry won’t be released until after Election Day, pushing back against Trump's pressure to disclose the results sooner.

Biden, for his part, said in a September town hall Russia will pay an “economic price” for meddling if he takes the White House, explaining that Putin promotes discord in the US — and for European allies.

Trump’s Ukraine scandal, an outgrowth of Russian election interference in 2016, led the House of Representatives to impeach Trump in December — though the Senate then acquitted him in early 2020.

The basis for the House inquiry was a push by Trump surrogates to force Ukrainian officials to provide damaging information about Biden and buttress questionable theories related to Russian influence peddling. Trump withheld — and later permitted — a military aid payment to Ukraine mandated by the US Congress, as part of an apparent quid pro quo with Ukrainian President Vladimir Zelensky.

Related: What Ukrainians think about Trump and his 'quid pro quo'

During this election’s first — and perhaps only — presidential debate, Trump again tried to redirect voters’ attention to Hunter Biden, Joe’s son whom Republicans accuse of corrupt dealings in his work for Ukrainian gas company Burisma.

And just this week, Trump lawyer Rudy Giuliani again returned to this theme after giving the New York Post a hard drive that purportedly contains damning photographs and emails from Hunter Biden. But the veracity and source of its contents are unclear, as Giuliani reportedly cultivated contact with Ukrainian parliamentarian Andrii Derkach — who is closely tied to the Russian government and was sanctioned by the US. Federal investigators are currently looking at whether the laptop left at a Delaware repair shop is linked to a foreign intelligence operation.

Biden has shrugged off Trump’s claim that his son received a $3.5 million payout from the wife of Moscow’s former mayor, an unfounded allegation stemming from a GOP-led Senate committee’s report. And ranking Democrats in the Senate have called the Republican document a “failed effort to manufacture dirt on Vice President Joe Biden … rooted in a known Russian disinformation effort.”

The Trump administration has been tough on Russia in some respects. It has sanctioned Russian officials and companies, fought Russian natural gas projects in Europe, and given military backing to key Eastern European allies — including “Fort Trump” to counter Russia in Poland.

Yet H.R. McMaster, ousted from his role as White House national security adviser in 2018, accused Trump of “aiding and abetting” Putin through descriptions of the US election process as “rigged” and attacks on mail-in voting. And another former national security adviser, John Bolton, infamously claimed that he feared leaving Trump alone with Putin at a 2018 summit and said Trump failed to mention election interference in his conversations with Putin.

Trump critics have pointed out the lack of strategic cohesion to oppose Russia’s leader and the inconsistency between his own ambivalent statements and actions by his administration. But there is less ambiguity around Biden’s views.

A possible Biden administration is expected to increase the pressure on Moscow, working with European partners to take a harder stance. However, the Obama administration — in which Biden was an instrumental foreign policy figure for eight years — was often criticized by Republicans as weak in dealing with Russia. Obama’s “reset” in relations was followed by a string of Kremlin successes in reclaiming Crimea and turning the tide in Syria’s civil war.

Biden referred to Trump as “Putin’s puppy,” which in turn provoked Putin — on the occasion of his own 68th birthday last week — to describe the Democratic candidate’s words as “quite sharp anti-Russian rhetoric.” 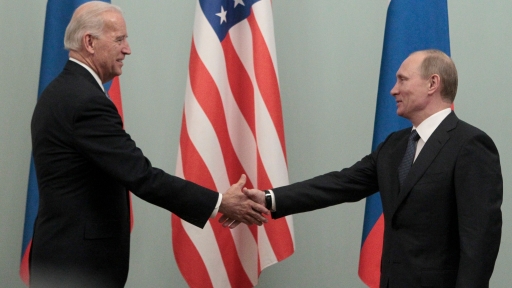 Then-Prime Minister Vladimir Putin shakes hands with Biden on the second day of his official visit to meet with top officials in the Russian capital in Moscow, March 10, 2011.

And though Biden is remembered for pro-opposition messages during a 2011 vice presidential trip to the Russian capital, Putin spoke favorably of Biden’s arms control position. Trump officials haven't yet been able to renew the New START arms-reduction treaty, but Biden has expressed support for extending that agreement.

After the German government confirmed Kremlin nemesis Navalny was poisoned by a nerve agent widely known to be used by the Russian government to take down its enemies, Trump avoided any condemnation in response to a question from the media during a press briefing.

"I don't know exactly what happened, I think it's tragic,” Trump said. “It's terrible, it shouldn't happen. We haven't had any proof yet, but I will take a look." The remarks stood in contrast with statements from German Chancellor Angela Merkel and British Prime Minister Boris Johnson, who had only harsh words for the Russian government. The head of NATO — which Trump has often sought to attenuate — called Russia’s use of Novichok an “assassination attempt.”

Trump deflected mentions of Russia by highlighting his decision to sell anti-tank weapons to Ukraine’s government for help in battles against Putin-backed fighters. But the president’s tone was also starkly different from adjectives used by senior administration officials who called the poisoning “clearly reprehensible,” expressing “grave concern” about Russia’s “malign activities.”

"A Biden administration will confront Russian aggression from a position of strength, even as we work to maintain strategic stability," said Biden spokesman TJ Ducklo. "Unlike this administration, which has never taken the Russian threat seriously, Joe Biden will rally our allies to deter Russian aggression as a united front and protect the interests of Western democracies.”

Some analysts speculate that future US responses to such incidents will occur in cyberspace, and the public may never find out about retaliatory moves — an approach signaled by Biden himself just before the 2016 election.

If Trump wins next month, it would be up to Congress to punish Russia for its role in helping him. But if Biden emerges victorious, then US diplomats under his watch could go to great lengths proving — in Russia’s backyard — that the new US commander-in-chief is not beholden to Putin.

In some respects, Russian success in America is mere popular perception that US electoral politics is hopelessly bogged down by mudslinging and partisan gridlock. And for Washington, there are many avenues to respond at the flashpoints along Russia’s territorial edges.

Russia’s interests are at stake nowhere more clearly than in Belarus, where authoritarian President Alexander Lukashenko is clinging to power amid raucous pro-democracy protests. Biden’s campaign website says Lukashenko is “hiding in fear from his own citizens, refusing to accept the will of the people” and calls this “a sign of a weak, illegitimate autocrat, not a strong leader.” And, Biden said, “Trump refuses to speak out” or “offer his personal support.”

In Nagorno-Karabakh, the region of the South Caucasus disputed between Azerbaijan and Armenia, the fault line between the US and Russia is less apparent. Yet Biden released a statement on Tuesday saying that he was “deeply concerned by the collapse of the October 10 ceasefire.” He also chided Trump for being “largely passive, and disengaged, throughout this recent period of escalation.” Armenian-American voters have been especially disappointed.

Unrest in Kyrgyzstan after a contentious election may turn out to be another complex situation, but nonetheless an additional country in Russia’s sphere of influence that the next US president would be hard-pressed to ignore.

Regardless of who is at the helm in Washington, Moscow is likely to face a bumpy road ahead — from Russia’s western flank to the steppes of Central Asia.