Daniel Arevalo drags his old suitcase along a highway that leads out of the Colombian college town of Pamplona, hoping to get a ride.

He is in the middle of a 1,000-mile-long trek to the city of Cali, where he wants to find construction work.

“The situation is getting worse each day in Venezuela. ... A month’s salary buys you a few days worth of food."

“The situation is getting worse each day in Venezuela,” said Arevalo, who had left his hometown of Maracay, Venezuela, in the middle of September without money for a bus ticket. “A month’s salary buys you a few days worth of food,” he says as he walks in his flip-flops up a steep road. 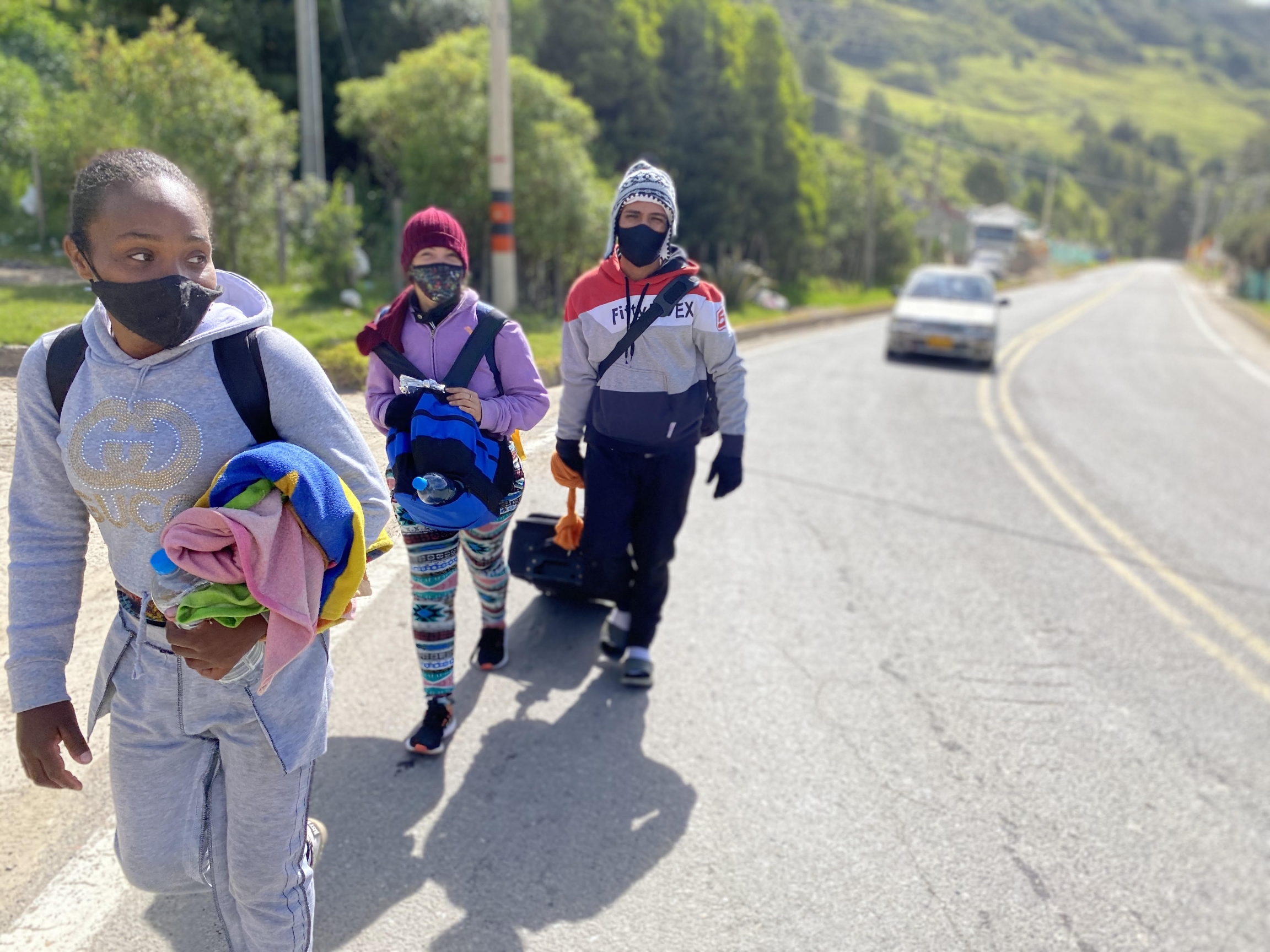 Daniel Arevalo drags his suitcase as he leaves the Colombian town of Pamplona on Oct 2. Arevalo had been on the road for two weeks and was trying to make it to Cali, Colombia, where he hoped to find construction work.

At least 5 million people have left Venezuela since 2014 to escape hyperinflation, food shortages and some of the lowest wages in the hemisphere. But the exodus of Venezuelans slowed in April as countries such as Colombia, Ecuador and Peru imposed restrictions on economic activity that mitigated the spread of the coronavirus — and also led to massive job loss.

Now, as these countries restart their economies, thousands of Venezuelan migrants are once again hitting the roads of South America in search of work. Their movements open a new chapter in the world’s second-largest displacement of people. Only war-torn Syria has produced more migrants and refugees in the past decade.

But the pandemic is making their route through South America tougher.

Colombia has closed its border crossings with Venezuela to prevent the spread of the coronavirus, forcing migrants to take dirt trails across the border that are under the control of drug trafficking groups. Shelters for the poorest migrants have also been shut down by officials, who are trying to prevent large gatherings.

In Pamplona, Colombia, more than 100 Venezuelan migrants are sleeping on sidewalks each night, according to humanitarian workers, braving cold temperatures and the constant noise of cargo trucks. The town is located 10,500 feet above sea level, and it's one of the first stops on a mountainous road that leads into the center of Colombia. Many migrants get stuck here for days.

“It’s not easy to leave this place,” said Johan Guerra, who was sleeping on a sidewalk with his wife and their six-year-old child.

The family had been on the road for more than a week and was trying to hitch a ride that would take them past the Paramo de Berlin, a plateau located 13,000 feet above sea level where night temperatures drop below freezing. The Paramo has become one of the biggest obstacles for migrants heading to the center of Colombia. 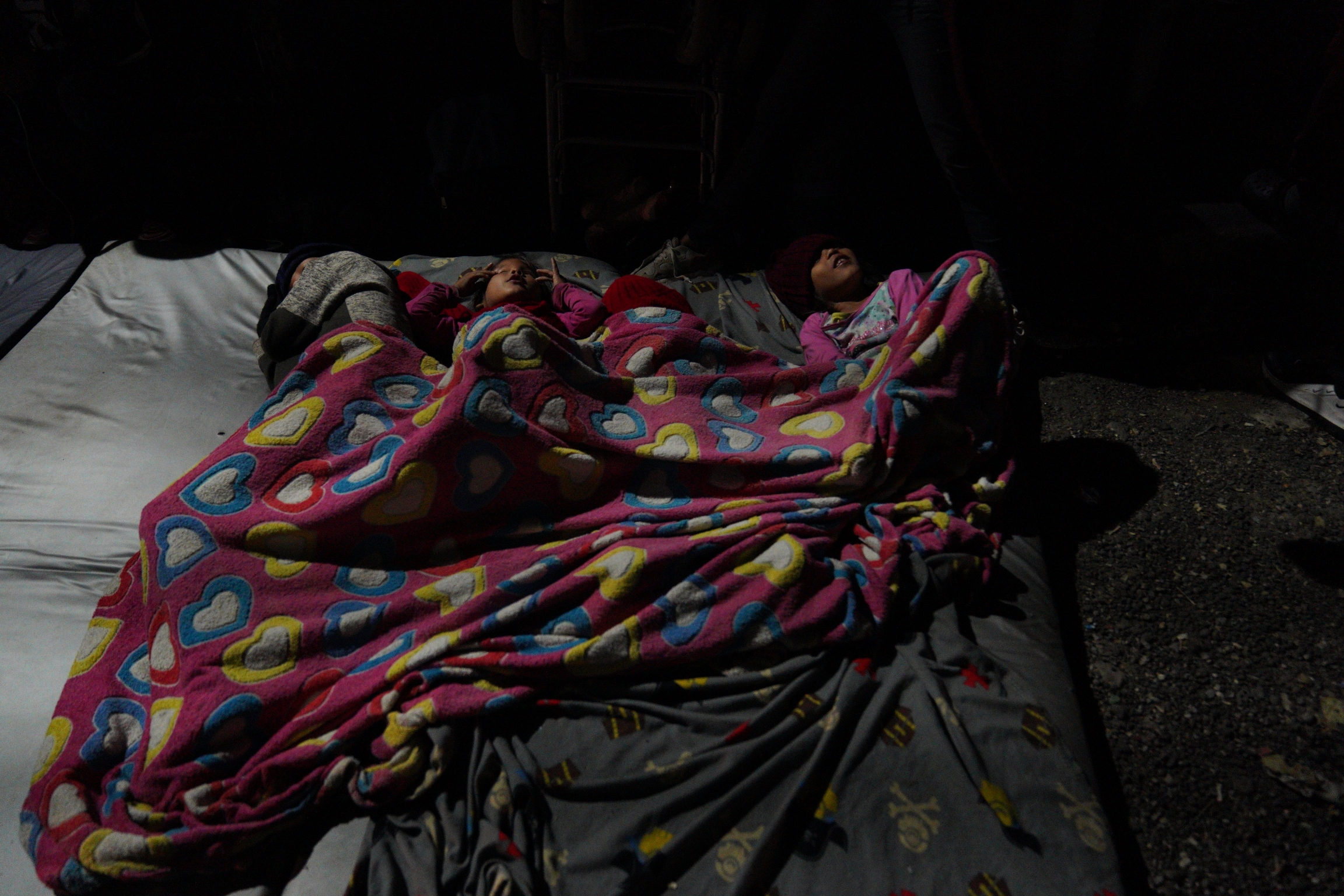 Migrants sleep on a sidewalk in Pamplona Colombia, on Sept. 30. The town had four shelters but local authorities ordered them to shut down to limit large gatherings.

“If you have a child, it’s not easy to walk all the way,” said Guerra, who had started his journey in the Venezuelan city of Valencia but ran out of money soon after crossing the border. He and his wife were hoping to get work in coffee farms around Medellin.

Immigration officials in Colombia said in September that around 200,000 Venezuelans could enter the country in the following months. Many are prompted to leave Venezuela by huge wage disparities, where the minimum wage is currently less than $2 a month. While in Colombia and Peru, a worker on minimum wage can make around $250 a month. 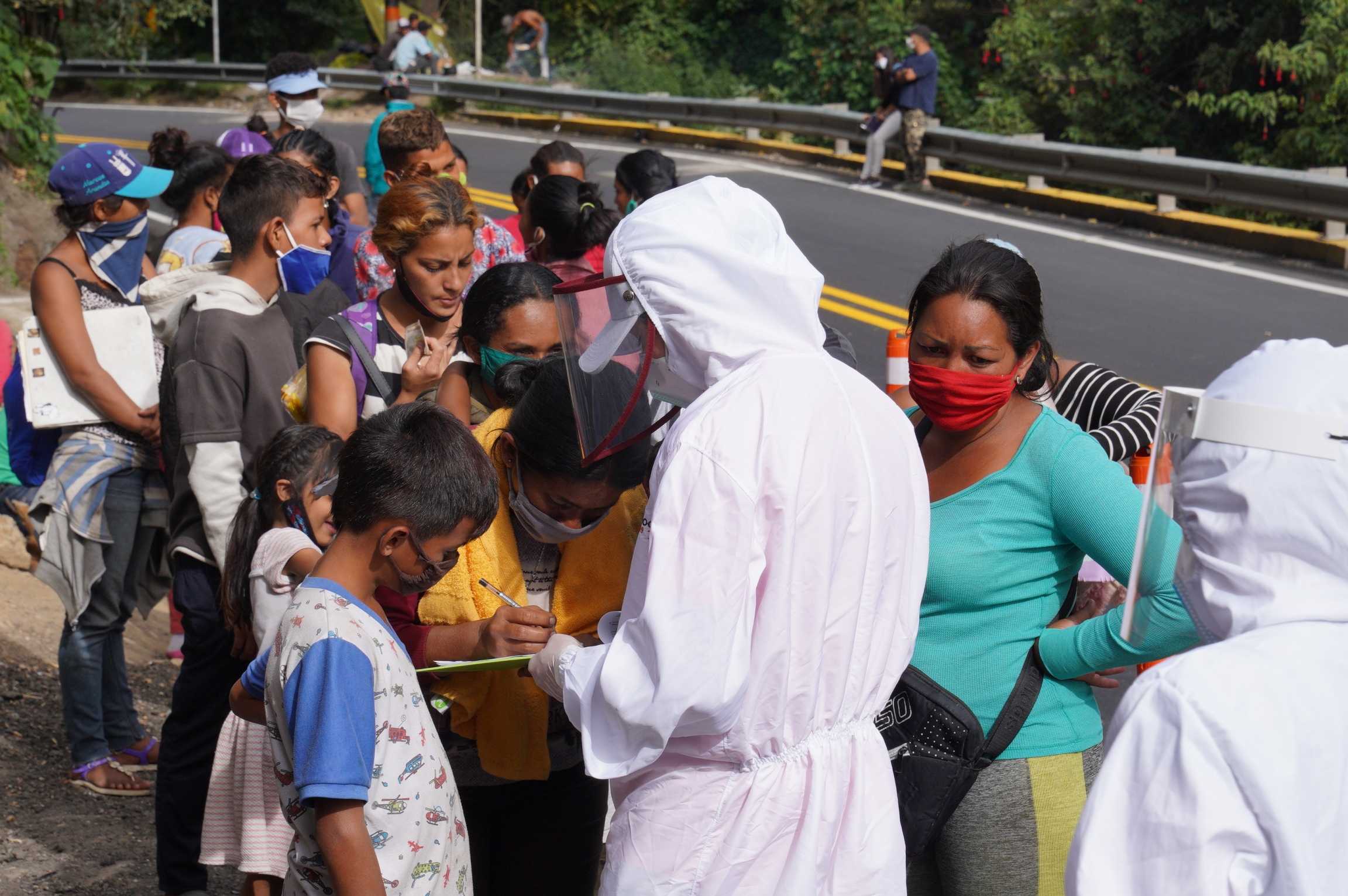 A humanitarian worker registers Venezuelan migrants arriving in Pamplona, Colombia, on Sept. 30. Social workers say that 200 migrants are passing through the country each day.

“We have no choice but to migrate and send money home to our families."

“We have no choice but to migrate and send money home to our families,” said Arevalo, 28, as he stood outside a gas station in Pamplona, trying to flag down a truck.

Rides have become harder to get during the pandemic because truck drivers worry about the coronavirus contagion. But some locals in Pamplona do try to help migrants with clothing and food.

Before the pandemic broke out, Martha Duque had converted the bottom floor of her home into a shelter that housed around 60 women and children each night.

Now she cooks for dozens of migrants each day, making a soup or porridge that volunteers hand out in styrofoam containers.

“It hurts me to see women and children sleeping outside and in the cold. ... We were ordered to close but there was no Plan B for the migrants."

“It hurts me to see women and children sleeping outside and in the cold,” said Duque, who was ordered to shut down her shelter by the municipal government. “We were ordered to close but there was no Plan B for the migrants,” she said. 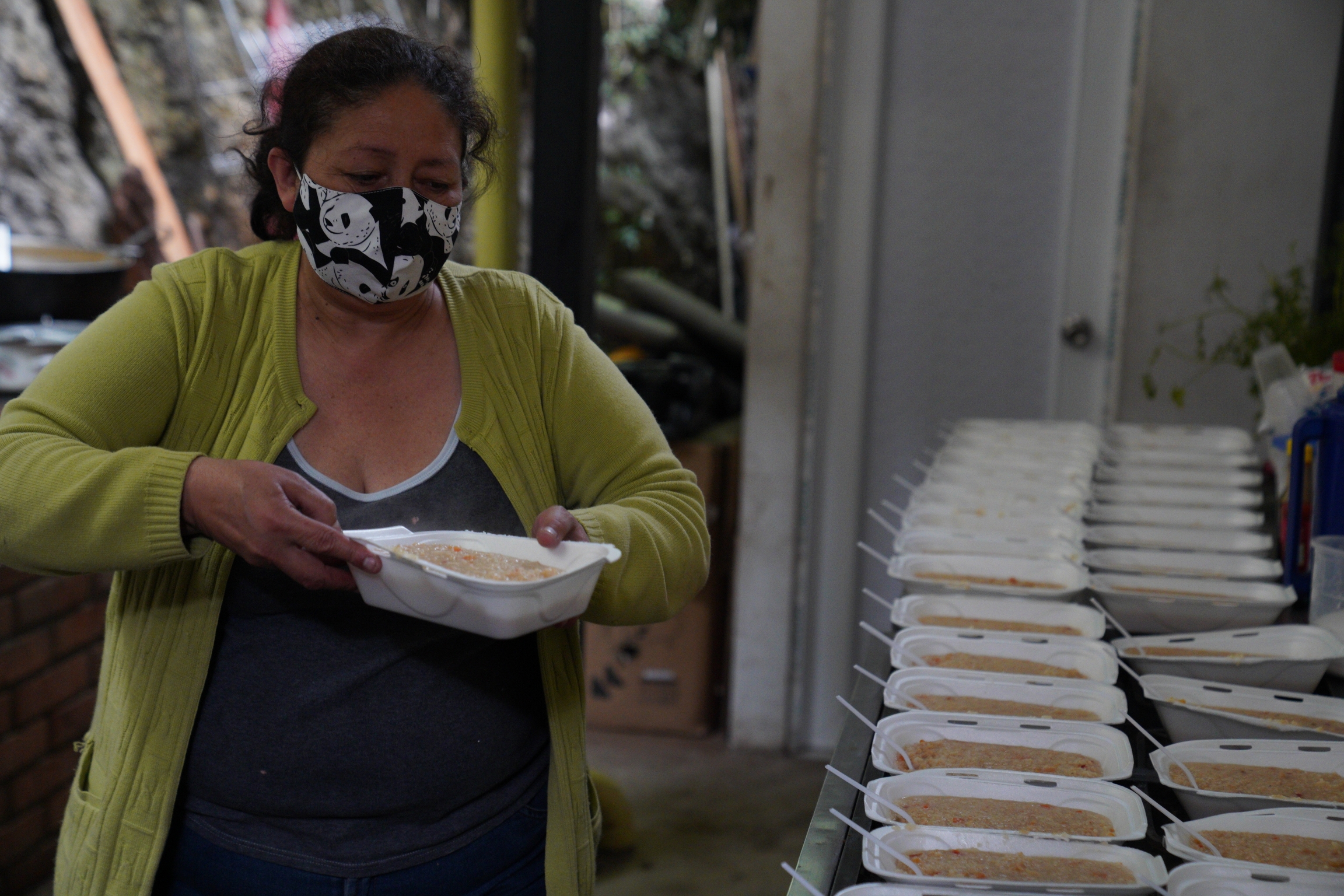 Martha Duque prepares meals for migrants at her home in Pamplona Colombia, on Oct. 1. Duque used to run a shelter for women and children but was forced to shut it down due to the pandemic.

Further down the road a local humanitarian group known as Consornoc gave out backpacks with toiletries, energy bars and ski masks to migrants traveling with children.

They spoke with migrants about the dangers that lay ahead and also listened to their stories.

“Some people have built up a lot of frustration and trauma during the journey. ... So, we take them aside and listen to them so that they can relieve themselves of some of the stress.”

“Some people have built up a lot of frustration and trauma during the journey,” said Angie Rincon, an aid worker with Consornoc. “So, we take them aside and listen to them so that they can relieve themselves of some of the stress.” 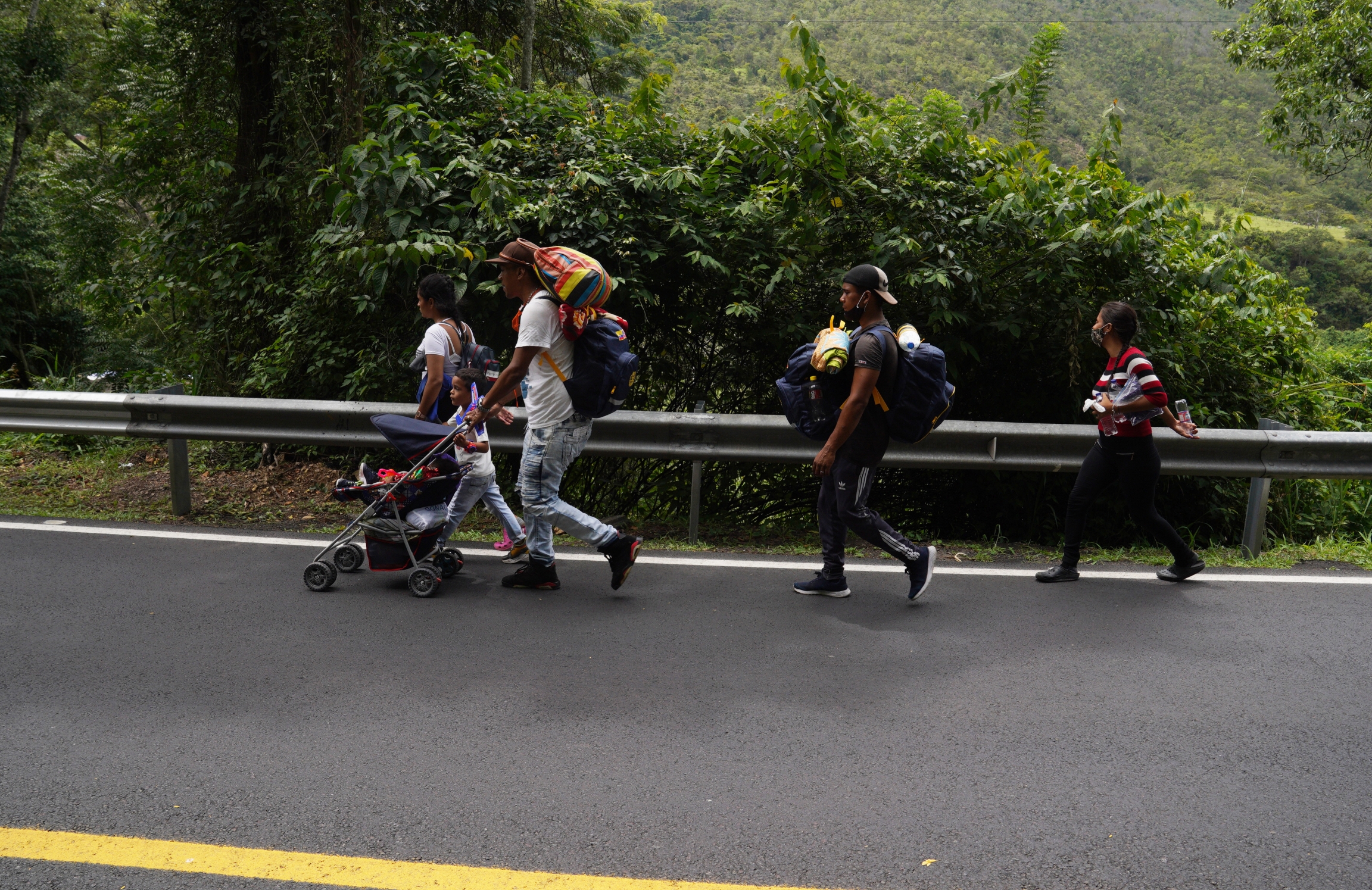 A family from Caracas, Venezuela walks along the road leading to Pamplona, Colombia, on Sept. 30. This family was heading to Ecuador where they had been promised work on a farm.

Veronica Gomez is one of the migrants getting free backpacks. She said that she left her hometown of Valencia, Venezuela, in September and was heading to Lima, Peru, where she had previously worked as an administrative assistant.

Gomez said she had to pay a gang along the border about $40 to let her family enter Colombia through a dirt trail. She was traveling with her partner, her teenage son and a nephew.

The family had no money left for bus tickets and said the journey to Peru could take up to a month.

“My goal is to work and help my family,” Gomez said. “I never thought that I’d have to come so far to do that."