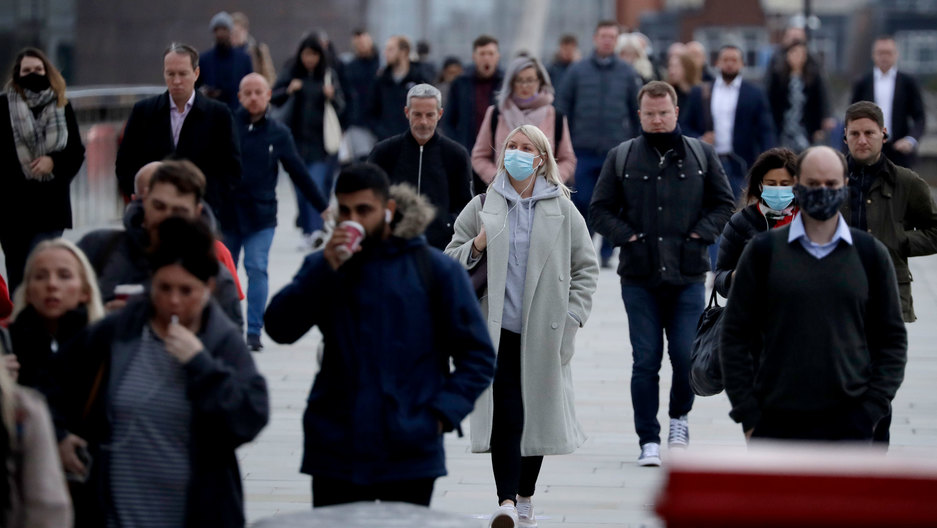 Commuters walk across London Bridge during the morning rush hour toward the offices in the financial district of the City of London, in London, Oct. 12, 2020.

Health authorities in Europe are bracing for new surges of the coronavirus, this time with concerns over “pandemic fatigue” as a growing number of regions return to lockdown restrictions. Three temporary hospitals in northern England have been alerted to prepare for patients with COVID-19 to ease increased pressure on the country’s National Health Service. The hospitals — located in Manchester, Sunderland and Harrogate — were mothballed when the outbreak receded over the summer but are now being ordered to reopen amid a new surge of infections.

And in Belgium, one of the European countries hit hardest by the coronavirus, officials on Monday warned that as many as 10,000 people could be infected every day by the end of the week. Meanwhile, in France, where 43,000 new infections were recorded over the weekend, Prime Minister Jean Castex warned that further restrictions may be needed. “Nothing can be ruled out,” to face COVID-19, Castex said on Monday as nine of France’s big cities, including Paris, have been placed under maximum virus alert.

Outside of Europe, China’s government announced that following nine new coronavirus cases in Qingdao, all 9 million people in the eastern city will be tested.

In a military parade over the weekend marking the 75th anniversary of the ruling party, North Korea’s Kim Jong-un unveiled several new weapons, including a large intercontinental ballistic missile carried on an 11-axle vehicle. The display seemed to be a message to the next US president after talks between Kim and President Donald Trump have stalled.

Related: How would Team Biden handle a showdown with North Korea?

Also on Monday, Armenia and Azerbaijan were again accusing each other of attacks over the separatist Nagorno-Karabakh region despite a ceasefire deal brokered by Russia on Saturday.

Explainer: How the next US president could vanquish the coronavirus 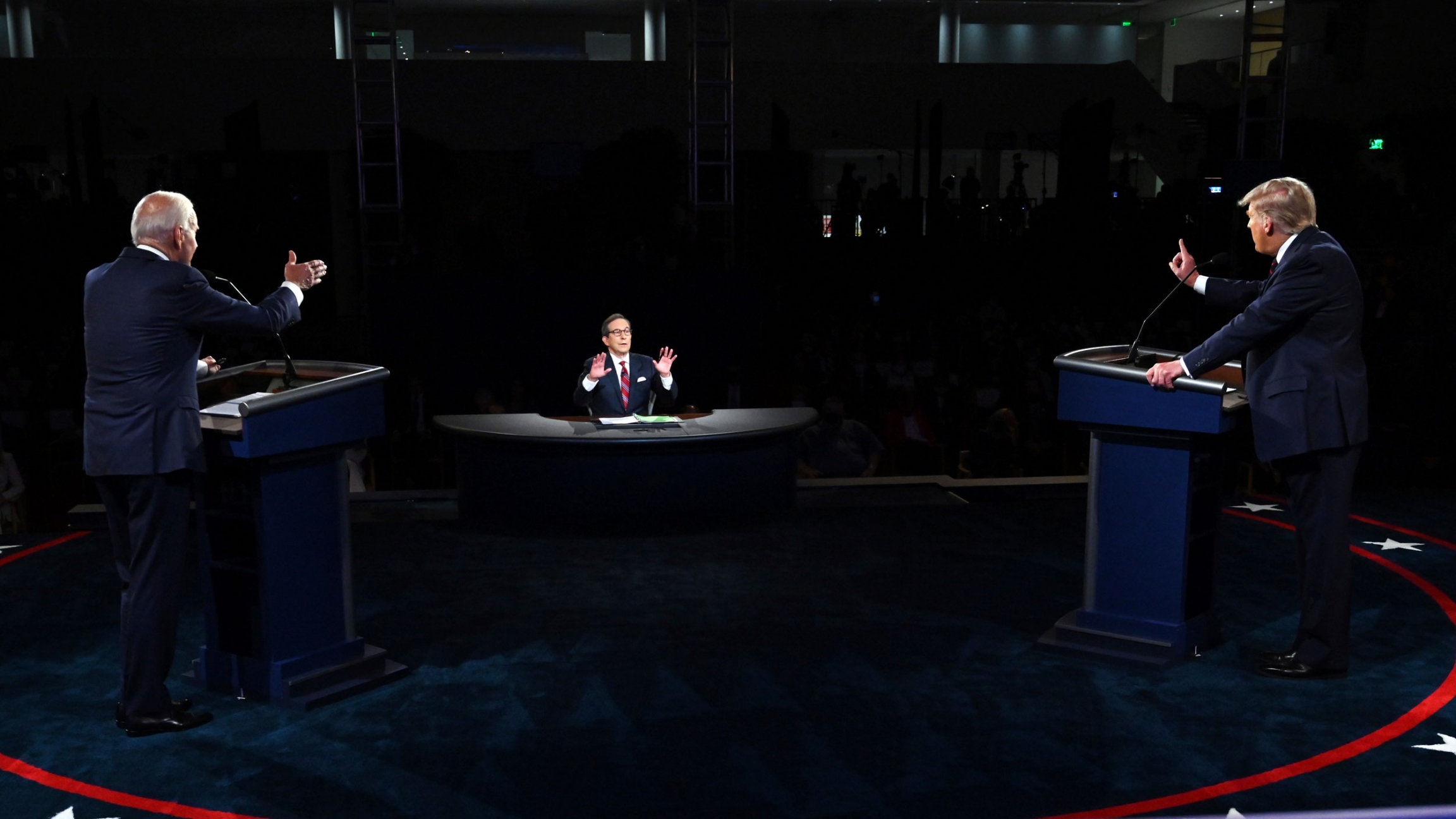 With the United States facing the highest death toll in the world, next month’s election is a referendum on which candidate voters believe will decisively defeat COVID-19. 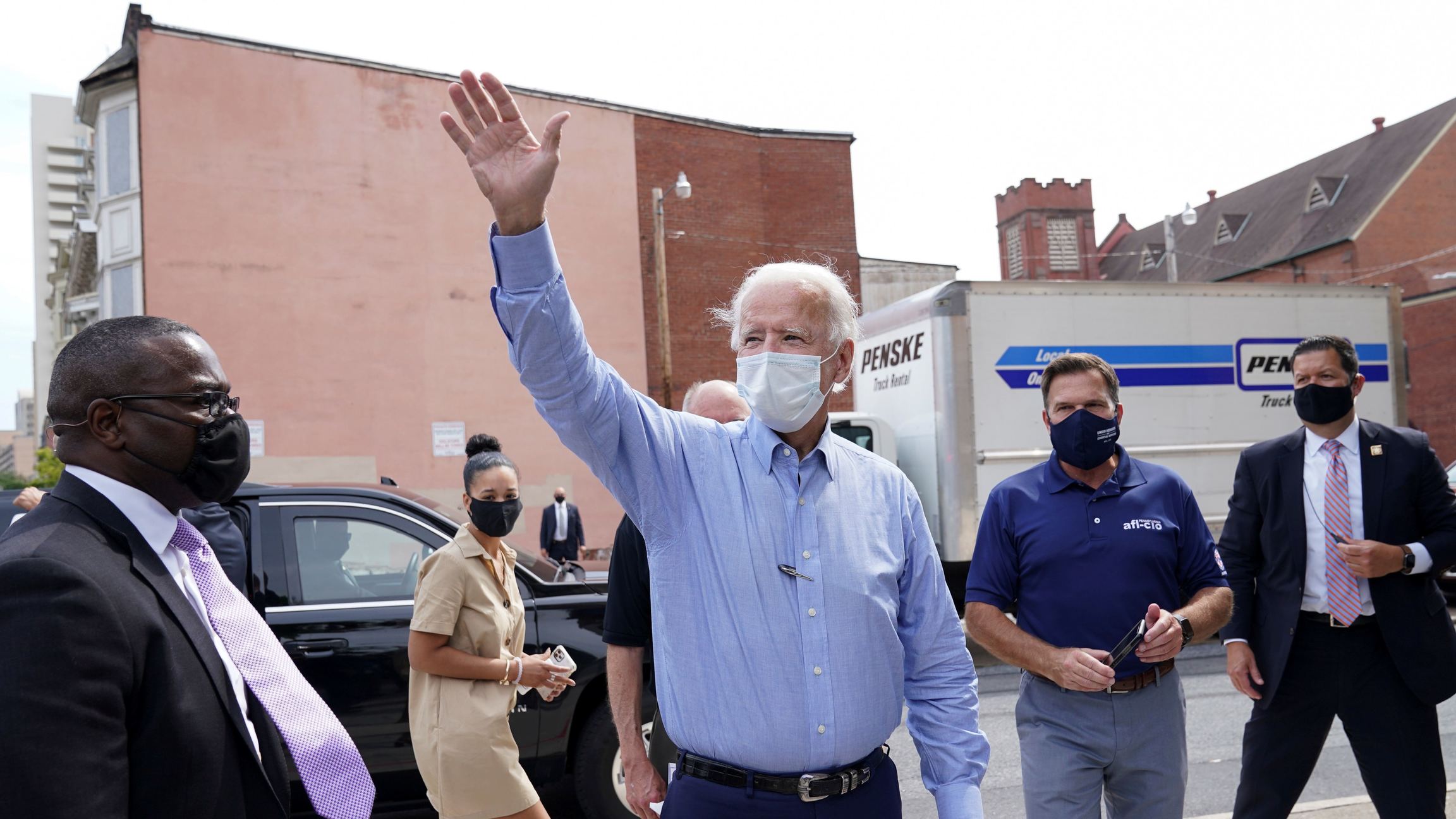 Democratic US presidential nominee Joe Biden waves to supporters as he arrives at the Pennsylvania AFL-CIO headquarters on Labor Day in Harrisburg, Sept. 7, 2020.

Much hangs in the balance as the United States chooses its next president — including, perhaps, the temperature of the Earth. The Democratic candidate, Joe Biden, says he can convince the world that the US — one of the top polluters in history — can guide the planet to a greener future.

Key to his strategy is cajoling the current top carbon emitter, China, to give up coal — not necessarily inside China, which is slowly veering toward cleaner energy — but in countries across Asia, Africa and the Middle East, where China is bankrolling dozens of new coal plants.

Related: Both candidates' platforms underline US struggle to confront China

Into the Thaw: Decoding Thwaites Glacier 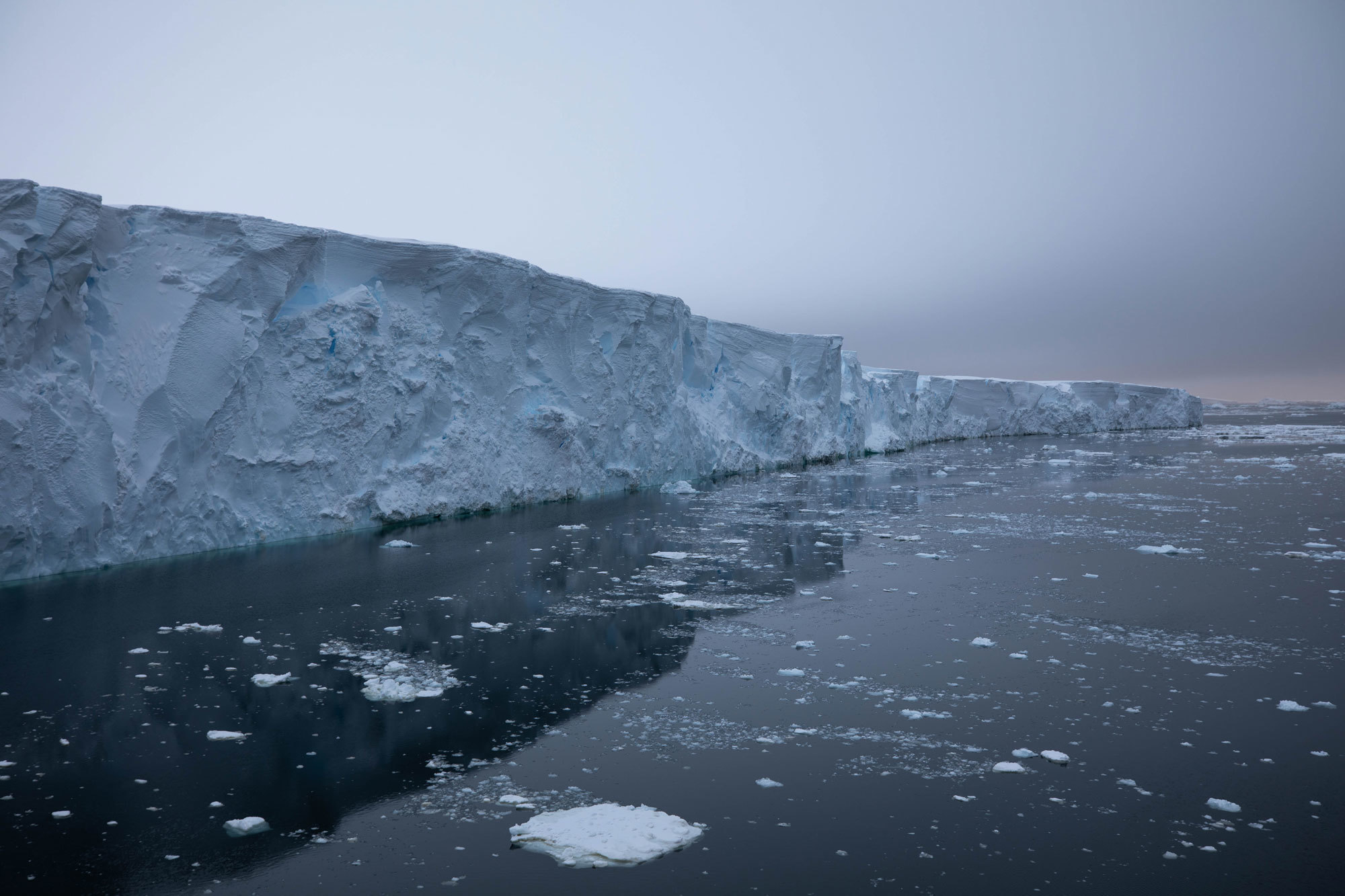 The front face of Thwaites Glacier rises an estimated 60 feet to 75 feet above water in the areas where it is most intact. Roughly 90% of an ice shelf typically sits below the water line.

A big high-five to The World’s Carolyn Beeler, who was selected as a recipient of the prestigious Edward R. Murrow in the news documentary category for her series "Into the Thaw: Decoding Thwaites Glacier" and also honored for her feature reporting in Reveal’s "To the Ends of the Earth" investigation.

The carvings on trees in the New Forest in the south of England date back centuries. Now, a new project from the New Forest National Park Authority has put more that 100 examples of the graffiti etched onto trees online including the "witch's marks," thought to have been intended to ward off evil spirits —  fitting online archive as we approach Halloween. 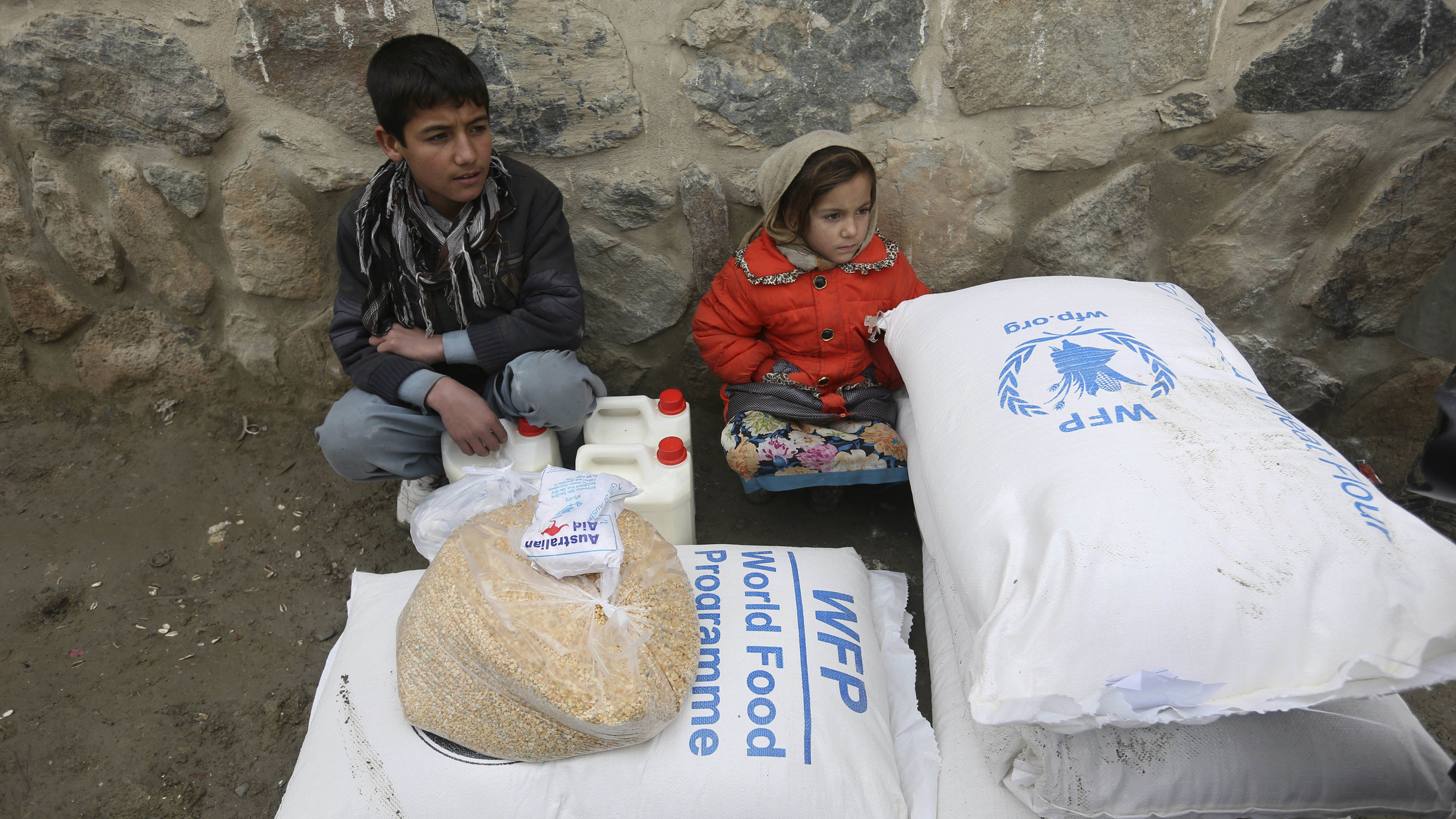 In this Jan. 24, 2017 file photo, children wait for transportation after receiving food donated by the World Food Program, in Kabul, Afghanistan.

The World Food Program, the United Nations' food-assistance branch, was awarded the Nobel Peace Prize on Friday for its work addressing hunger, particularly during the coronavirus pandemic, and for creating a foundation for peace in nations ravaged by war. We take a look at past winners of the prize, too. And, hundreds of coronavirus vaccines are in the works worldwide. But if and when an effective vaccine becomes available, will people take it? And, scientists are tracking turtle egg poachers with GPS and decoys — it's James Bond meets wildlife conservation.