He lives in Washington state, on the Colville Indian Reservation, as do thousands of other Sinixt members, many of whom were forced out of their ancestral lands in Canada decades ago.

Desautel wanted to open up a discussion about that. So, years ago, he went hunting north of the border where he shot a ceremonial elk. Desautel didn’t have a license to do so, but he claims that since he had been on traditional Sinixt hunting grounds, it was not against the law.

Desautel was acquitted of the charges in the case in 2017, but multiple appeals landed him in the Canadian capital, Ottawa, for the Supreme Court hearing last Thursday. 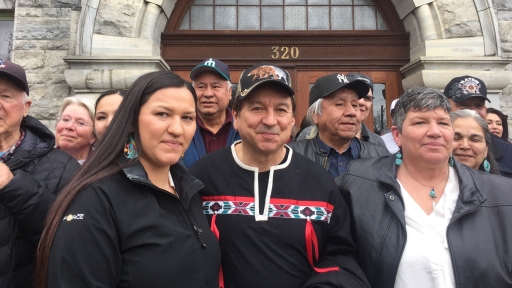 Rick Desautel, flanked by his daughter and his wife, Linda (right), celebrates his acquittal of illegal hunting charges outside the provincial courthouse in Nelson, British Columbia, in March 2017.

For Desautel, shooting the elk was an act of protest. He wants Canada to open up his traditional homelands to hunting and fishing “and other rights and stuff that we have on our traditional territory for future generations of the Sinixt people,” he said outside the courthouse last week.

Whether Sinixt members in the US have rights in Canada is up for debate. The final decision in the case could set precedent for reconciliation and tribal sovereignty throughout the nation.

Canada’s Sinixt tribe is officially extinct — something that the federal government declared after the last Canadian member died in 1956. But thousands of Sinixt descendants like Desautel still live across the border, in Washington state.

Early into the one and only Supreme Court hearing in the case — which involved some in-person appearances at the courthouse and others attending via video, due to the pandemic — Justice Malcolm Rowe summed up the question at the heart of Desautel’s fight.

“Isn’t it just simple, what the BC Court of Appeals said?” Rowe asked during the hearing, directing the question at prosecutor Glen Thompson.

“Those communities and nations who were encountered by Europeans at contact had rights … and whether they’re on one side of the border or on the other side of the border, they’re successors and by virtue of being successors, they hold the rights … is it any more complicated than that?”

“Those communities and nations who were encountered by Europeans at contact had rights … and whether they’re on one side of the border or on the other side of the border, they’re successors and by virtue of being successors, they hold the rights … is it any more complicated than that?" said Justice Rowe.

“The case is not about whether Sinixt people exist or have rights in Canada,” Thompson said. “It’s about whether the Lakes of Washington state in the United States have constitutional rights despite clear words recognizing and affirming ... the existing Aboriginal and treaty rights of the Aboriginal Peoples of Canada.”

Rights afforded to Canada’s Indigenous people were established in 1982 under section 35 of the Canadian constitution.

“Attorneys general representing five Canadian provinces and one territory argue that because current Sinixt tribal members do not reside in Canada, they do not have rights there.”

Christopher Rupar, who represents Canada’s federal government, said in order to be recognized under Canadian law, a tribal member would not only have to have Canadian roots, but members would also currently have to reside in the country.

Defense attorney Mark Underhill said that regardless of whether people like Desautel are considered Sinixt in Canada, or members of the Lakes tribe in the US, if they do not have access to their traditional hunting grounds, they are simply cut off from their cultural identity.

British Columbia has argued in the past that the Sinixt left Canada to take up farming in Washington, but previous decisions in the case haven’t supported that claim.

Underhill told justices it’s unlikely the Sinixt would have left Canada voluntarily. He said the argument had no place in Canadian law: “Because what it does is completely obliterate the concept of Aboriginal identity that is tied to place and so to suggest that a move would ever be voluntary, that an Aboriginal peoples would abandon their identity.”

“You clearly understand that this case is about how nine, non-Indigenous judges interpret four words: Aboriginal people of Canada,” Paul Williams told the Justices in a videoconference call from his home in Ontario.

Williams is the lead negotiator for the Peskotomuhkati Nation, in charge of negotiations with the crown about Aboriginal and treaty rights and title to land in Canada.

“Either those words acknowledge the timeless connection between an Indigenous people and its land in Canada or the word ‘of’ is a possessive term, a word of control that enables the crown’s governments to distinguish between “our Indians” and ‘somebody else’s Indians.’”

“Either those words acknowledge the timeless connection between an Indigenous people and its land in Canada or the word ‘of’ is a possessive term, a word of control that enables the crown’s governments to distinguish between “our Indians” and ‘somebody else’s Indians.’”

In the US, the Sinixt are also known as the Arrow Lakes, or simply, Lakes tribe. They speak a dialect of Salish. Puti kwu ala7 means “We are still here” — a phrase Shelly Boyd says she has been using a lot lately.

Puti Kwu ala7 WE ARE STILL HERE!

Boyd was broadcasting on Facebook Live from a hotel room in Ottawa during a short court recess.

Boyd and hundreds of Sinixt members from Washington made their way to the border on Thursday to show their support for Desautel. Due to COVID-19, they couldn't enter Canada.

Related: Isolation may be a greater risk than COVID-19 for residents of Canada's nursing homes

“I am an Arrow Lakes Indian, and I am not extinct,” Boyd said into her phone’s camera on Thursday morning.

A final decision in the case is not expected for at least six months.