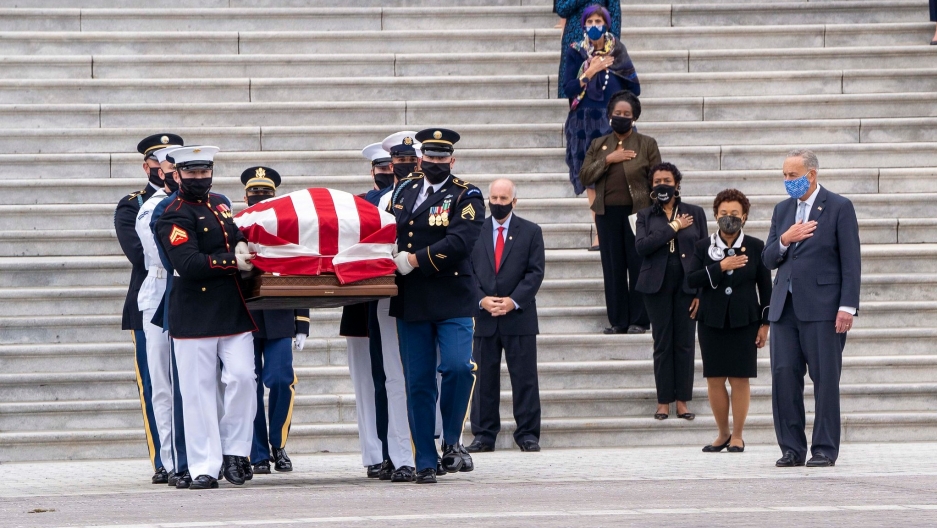 Justice Ruth Bader Ginsburg was honored in an intimate ceremony in Statuary Hall. She became the first woman to lie in state at the Capitol on Sept. 25, 2020.

Supreme Court Justice and liberal icon Ruth Bader Ginsburg, who recently passed away at the age of 87, was best known for championing women’s rights. But she also leaves behind a remarkable environmental legacy.

Harvard Law Professor Richard Lazarus, author of “The Rule of Five: Making Climate History at the Supreme Court,” believes the “classic example” of Ginsburg’s contribution to environmental jurisprudence was the 2007 case Massachusetts v. EPA, which is widely considered the most important environmental case ever decided by the US Supreme Court.

This was the case in which the court established that EPA had authority to regulate greenhouse gases under the Clean Air Act, an idea that EPA itself had rejected. No less importantly, according to Lazarus, the case established that a plaintiff who alleged climate injury had the right to bring a case in federal court — “a hugely significant decision in its own right,” according to Lazarus.

Of the cases for which Ginsburg wrote the opinion for the majority, the most significant was Friends of the Earth v. Laidlaw.

In this case, a group of citizens brought a lawsuit under the Clean Water Act alleging hundreds of violations of mercury emissions rules by the Laidlaw industrial facility in the area around South Carolina's North Tyger River. The Court of Appeals had held that the environmentalists lacked the requisite injury to bring the lawsuit, but the Supreme Court reversed the previous ruling.

“Justice Ginsburg wrote a tour de force in that opinion,” Lazarus says. Her opinion not only established that these particular environmental plaintiffs had standing to bring their particular Clean Water Act suit. Ginsburg also announced a new test for environmental plaintiffs' standing that dramatically confirmed the right of people to file suit based based on the reasonable concern that there had been such an adverse impact, and that this impact posed an injury to them. The concern itself was sufficient.

“That was a hugely important ruling by the court. And Justice Ginsburg crafted it quite nicely,” Lazarus says.

“You had to earn her vote. And if you could not persuade her [on] the legal merits of your position, you could have the best environmental policy in the world and you would not get her vote.”

Justice Ginsburg ruled most frequently in favor of environmentalists — but not always, Lazarus says. “That is what gave her real credibility and actually confirms her integrity,” Lazarus says. “You had to earn her vote. And if you could not persuade her [on] the legal merits of your position, you could have the best environmental policy in the world and you would not get her vote.”

Ginsburg should be remembered “first and foremost as a great lawyer — just an outstanding lawyer,” Lazarus says. “Someone who did not come to the cases predisposed to necessarily rule in favor of environmentalists but who came with an open mind and … was willing to look at the cases and be persuaded by the legal arguments. She was voting for you because you earned her vote with the strength of your legal argument. That's a great legacy for a judge.”

“They're going to miss her,” Lazarus adds. “They’re going to miss having such a good lawyer in their midst. … They’ll miss her voice. And obviously, if you replace a Justice Ginsburg with a justice who is more like Justice Kavanaugh … that could play a major role in limiting the ability of a future EPA to protect public health and welfare under existing statutes. If Congress is able to pass new laws that are tougher, then that problem goes away.”

This article is based on an interview with Jenni Doering that aired on Living on Earth from PRX.