In the run-up to the general election on Nov. 3, our series examines how US President Donald Trump and Democratic challenger Joe Biden diverge on key issues by identifying important stories that highlight what the candidates would do differently on the global stage:

Most scientists agree with dire projections that the coronavirus pandemic will continue to worsen with the onset of colder temperatures and flu season. And as outbreaks become more catastrophic by late fall, US voters are being asked to select a presidential candidate in November who can lead them to a better place after a protracted war of attrition with COVID-19.

President Donald Trump seems to be emerging from his personal battle with the coronavirus emboldened and still skeptical of the dangers. Though his physician said earlier this week that Trump was not fully “out of the woods,” some political analysts hoped his brush with serious illness might prompt a rethink about the tone of his leadership.

Democratic challenger Joe Biden, who extols the virtues of science and a humble approach to the deadly virus, temporarily paused his attack ads while Trump faced imminent risk. Polls continue to show that the US public has greater trust in Biden’s ability to handle the pandemic.

More than 210,000 Americans have already died, and some 7 million have tested positive for the coronavirus. But up to 10 times that number may have contracted the virus, with antibody studies showing around 10% of the US population was likely infected by midsummer.

Here we look at some of the difficult policy questions around the most daunting invisible enemy to strike America in generations, explaining what lies ahead for the vaccine race, mask mandates, testing shortages, governance woes and the eventual end of the pandemic:

The $10 billion federal effort championed by Trump to produce a coronavirus vaccine, Operation Warp Speed, has made big leaps toward the ambitious goal of delivering 300 million doses starting in January 2021.

While Trump has generated flack for political interference in the Food and Drug Administration approval process, the vaccine drive that he cheerleads has seen five US-backed contenders enter phase three clinical trials. Genetic vaccines from Moderna and Pfizer are both moving ahead quickly, but they face logistical hurdles to mass distribution: each requires two doses and ultracold storage. The Johnson & Johnson viral vector vaccine — which only requires one shot and is easier to transport — is similar to what AstraZeneca/University of Oxford is developing. And Novavax is working on a protein-based vaccine.

But none is 100% guaranteed to materialize before the election or the end of 2020 — or ever. Even the successful options potentially confer just partial and temporary immunity. 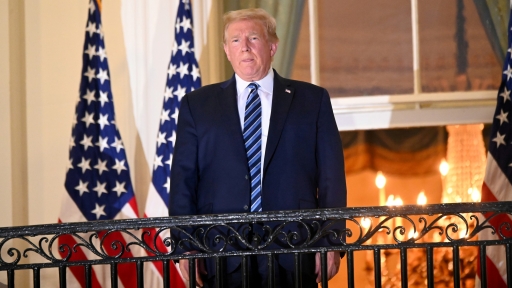 After pulling off his face mask, President Donald Trump poses atop the Truman Balcony of the White House following hospitalization at Walter Reed Medical Center, Oct. 5, 2020.

Related: How and when will we know that a COVID-19 vaccine is safe and effective?

Biden’s plan highlights the difficulty of distributing vaccines to every American. He would commit $25 billion to this effort, with “scientists in charge of all decisions on safety and efficacy.” Biden also calls for the release of all vaccine development data as part of a public review process and oversight by Congress.

Moreover, Biden stresses equitable accessibility to the best health protections, with consumers “not price gouged as new drugs and therapies come to market.”

According to the Department of Health and Human Services, Operation Warp Speed is part of a “broader strategy to accelerate” not just a vaccine, but also therapeutics and diagnostics. A significant part of Trump’s own recovery from the coronavirus thus far has been his use of arguably the three most promising therapeutics now available: remdesivir, an antiviral drug from Gilead; dexamethasone, a corticosteroid to tamp down the immune system from overreacting; and an experimental monoclonal antibody cocktail from Regeneron.

On Wednesday, Trump released a video filmed in the Rose Garden referring to his sickness as a “blessing in disguise” and promising that the medicines he received — which he called “cures” — would soon be available at no cost to all Americans.

“I want everybody to be given the same treatment as your president because I feel great,” said Trump, who received medical care valued at over $100,000.

Trump has infamously wavered on the question of mask effectiveness and its value in stopping the spread of the coronavirus. He and his inner circle have often spurned the use of face coverings, with few exceptions before the White House recently became the US capital’s most prominent COVID-19 cluster — totaling at least 35 positive cases.

Though Trump triumphantly removed his mask after returning home from Walter Reed military hospital on Monday, he has at times encouraged Americans to wear them “when needed.” By August, he had changed his tone, saying that “this is a patriotic thing to do. Maybe they’re great.”

However, he also mocked Biden at their debate last week by saying, “He could be speaking 200 feet away … with the biggest mask I’ve ever seen.”

In a largely symbolic effort to contrast himself with Trump, Biden has made a habit of almost always wearing a black mask in public.

While Trump’s plan for a possible second term doesn’t mention masks, the Biden plan to beat COVID-19 includes implementation of “mask mandates nationwide by working with governors and mayors.” His platform cites a statistic that universal mask-wearing could save some 70,000 lives by the end of the year.

Biden urges “every American to wear a mask when they are around people outside their household” and says that states should require them by law, with local authorities buttressing mandatory orders. The former vice president has sometimes called for a national mask mandate but also questioned whether the federal government has the power to enact one.

A key part of the program advocated by Biden and his running mate, Sen. Kamala Harris, is to massively ramp up testing capabilities and “fix Trump’s testing-and-tracing fiasco.” They envision doubling the number of drive-through test sites, investing in at-home and instant tests, and launching a Pandemic Testing Board to coordinate production at scale.

Biden also has pledged to establish a US Public Health Jobs Corps by mobilizing over 100,000 people to work with local organizations in at-risk communities to engage in “culturally competent” contact tracing. Assistance to underserved groups would include aid for those needing to isolate from their families and better protection for elderly people.

He aspires to create a pandemic dashboard for tracking of local transmission in every zip code to help people gauge risk levels by geography. Biden pledges to invoke the full force of the Defense Production Act to address shortages in personal protective equipment and shift manufacturing of PPE to domestic sources.

Trump’s second-term agenda, meanwhile, promises to “eradicate” COVID-19, returning life to normal by 2021 while making all critical medicines and supplies available to health care workers and refilling stockpiles for the future.

Beyond the technical failures of the federal coronavirus response, much of the criticism leveled at Trump has focused on the lack of a strategy, which has made the pandemic worse in the US than in many other comparable nations. 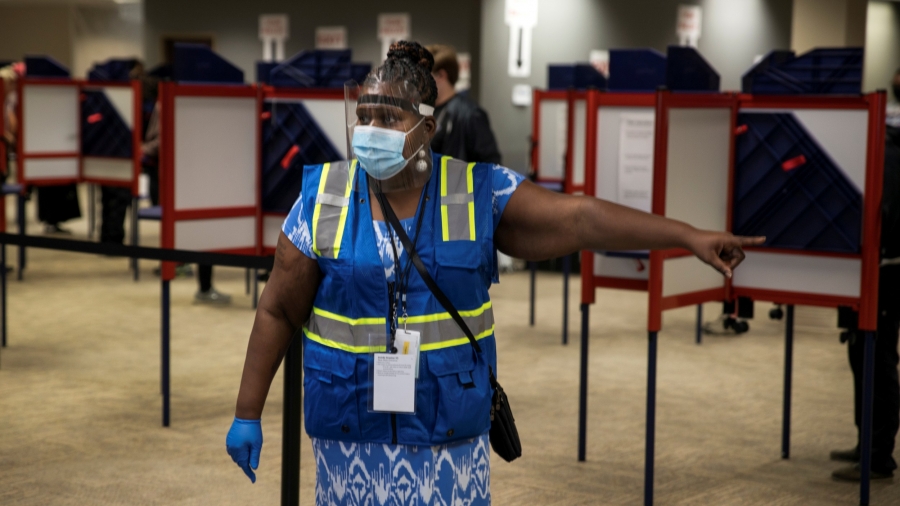 A poll worker directs voters to cast their ballots for the upcoming presidential election as early voting begins in Cincinnati, Ohio, Oct. 6, 2020.

While Trump seeks credit for partially shutting down travel from China in February and imposing a haphazard ban on arrivals from Europe, at present, there are only 45 countries where Americans can go around the world — due to fears that people from the US will spread the disease. Most of those destinations require tests upon arrival, and some mandate quarantines.

Biden’s campaign has called for “clear, consistent, evidence-based national guidance for how US communities should navigate the pandemic.” This would entail more resources for small businesses to install plexiglass dividers and for schools to accommodate the nearly impossible demands of parents and teachers.

Part of Biden’s solution is for the Centers for Disease Control and Prevention to better advise public officials on how to open and close parts of the economy according to benchmarks and gating criteria on the degree of viral spread. Biden has pushed back against Trump’s claims that the Democrat would impose blanket stay-at-home restrictions if the positivity rate or number of infections rose too high. Like other Democrats, Biden favors more federal aid to municipal governments.

End to the pandemic

Trump and many in his party contend fewer lockdowns are better — not just for business — but for strengthening viral resistance, as Sweden has notably attempted. Yet, according to a report published in September by consulting firm McKinsey, the timing for the US and other societies to reach the epidemiological end of the pandemic will be determined by several factors. The most important milestone in attaining such “herd immunity” is the successful adoption of a vaccine.

Among the other crucial factors are the level of “natural” immunity from prior exposure to COVID-19; possible cross-immunity from other coronaviruses; potential partial immunity from related immunizations, such as the BCG vaccine against tuberculosis; and regional variations in how populations mix. Other biological and demographic variables also come into play.

With sustained and coordinated action over time, normalcy will eventually set back in, and the coronavirus will be history.

But over the long term, another pandemic could catch the US off guard again. So, Biden proposes reinstating the Obama-era White House National Security Council Directorate for Global Health Security and Biodefense, which the Trump administration disbanded in 2018.

Biden also proposes to expand the number of disease detectives from the CDC, especially at their office in Beijing. He would also rebuild USAID’s pathogen-tracking initiative, restore working rapport with the World Health Organization, and empower a task force at home to examine racial disparities in the impact of infectious diseases.