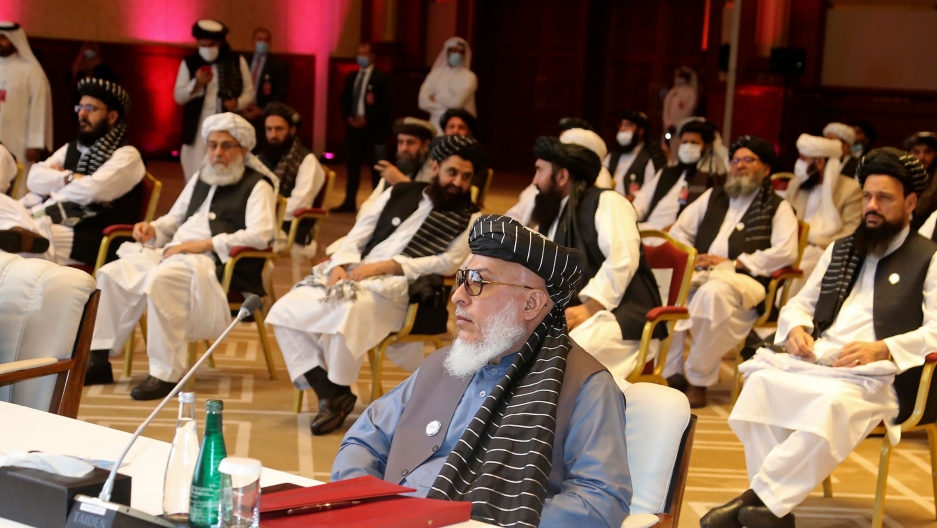 Taliban negotiator Abbas Stanikzai, center front, and his delegation attend the opening session of peace talks between the Afghan government and the Taliban, in Doha, Qatar, Sept. 2020.

US President Donald Trump indicated on Wednesday in a tweet plans to withdraw the last of US troops out of Afghanistan by Christmas — news welcomed by the Afghan Taliban on Thursday.

If that withdrawal happens, it would be months ahead of schedule and the tweet made no reference to a Taliban promise to fight terrorist groups — a previous pre-requisite for an American withdrawal.

America's exit from Afghanistan after 19 years was laid out in an agreement Washington reached with the Taliban in February. However, that agreement said US troops would be out of Afghanistan in 18 months, provided the Taliban honored a commitment to fight terrorist groups, with most attention seemingly focused on the ISIS affiliate in the country.

Taliban spokesman Zabihullah Mujahed said Trump's statement was welcome and he considered it a positive step for the implementation of the peace agreement between the US and the Taliban.

The Taliban are "committed to the contents of the agreement and hope for good and positive relations with all countries, including the US, in the future," he said.

Those talks have been painfully slow as both sides have become bogged down on the intricacies of how they would go forward with reaching an agreement. Weeks have been spent discussing Islamic jurisprudence and how it will impact negotiations.

Still, both sides have stayed at the negotiating table even as Washington's peace envoy Zalmay Khalilzad last week returned to the region. Little information of substance has emerged from the talks.

In his tweet, Trump said "we should have the small remaining number of our BRAVE Men and Women serving in Afghanistan home by Christmas."

The Taliban have never detailed the commitments they made in the February peace agreement with the US and Washington has refused to give details, citing security concerns.

Even as the warring sides meet in Doha to map out what a post-conflict Afghanistan might look like, Washington and NATO have already begun reducing their troop numbers. Washington is now down to 8,600 troops from an estimated 13,000 when it signed the agreement with the Taliban on Feb. 29.

Trump's comments caught most Afghan observers by surprise and the Afghan government did not immediately respond to to the tweet.

This is not the first time Trump has undercut the Pentagon with announcements about troop strength in Afghanistan. He previously has publicly announced American troop strength without vetting by the Pentagon, which has not yet responded to Trump's tweet.

Trump has long promised to end U.S. involvement in Afghanistan and the agreement with the Taliban does not require the two Afghan sides reach a deal before Washington withdraws.