Joaquín Salvador Lavado, better known by his pen name, Quino — the creator of Latin America’s most beloved comic strip — died last Wednesday in his home of Mendoza, Argentina, at 88.

Quino was best known for his satirical comic strip, “Mafalda,” which ran from 1964 to 1973, and featured a socially conscious, 6-year-old girl who was a champion of democracy and human rights.

“Mafalda” was born out of an advertising campaign for a household appliance company that never came to fruition. But Quino soon gave the character her own world, filled with friends that represented different personality types: the capitalist Manolito, gossiper Susanita and studious Felipe. Mafalda herself was an outspoken girl from an urban, middle-class family who constantly questioned adults on things like war, politics and their treatment of the environment. She loved the Beatles but hated soup.

Initially, the comic strip came out once a week in an Argentine newspaper but then spread across Latin America and, eventually, Europe — gaining a strong following in countries like Spain, Italy and Portugal. Today, there’s all kinds of merchandise with Mafalda’s face on it, from keychains to notebooks to tote bags. 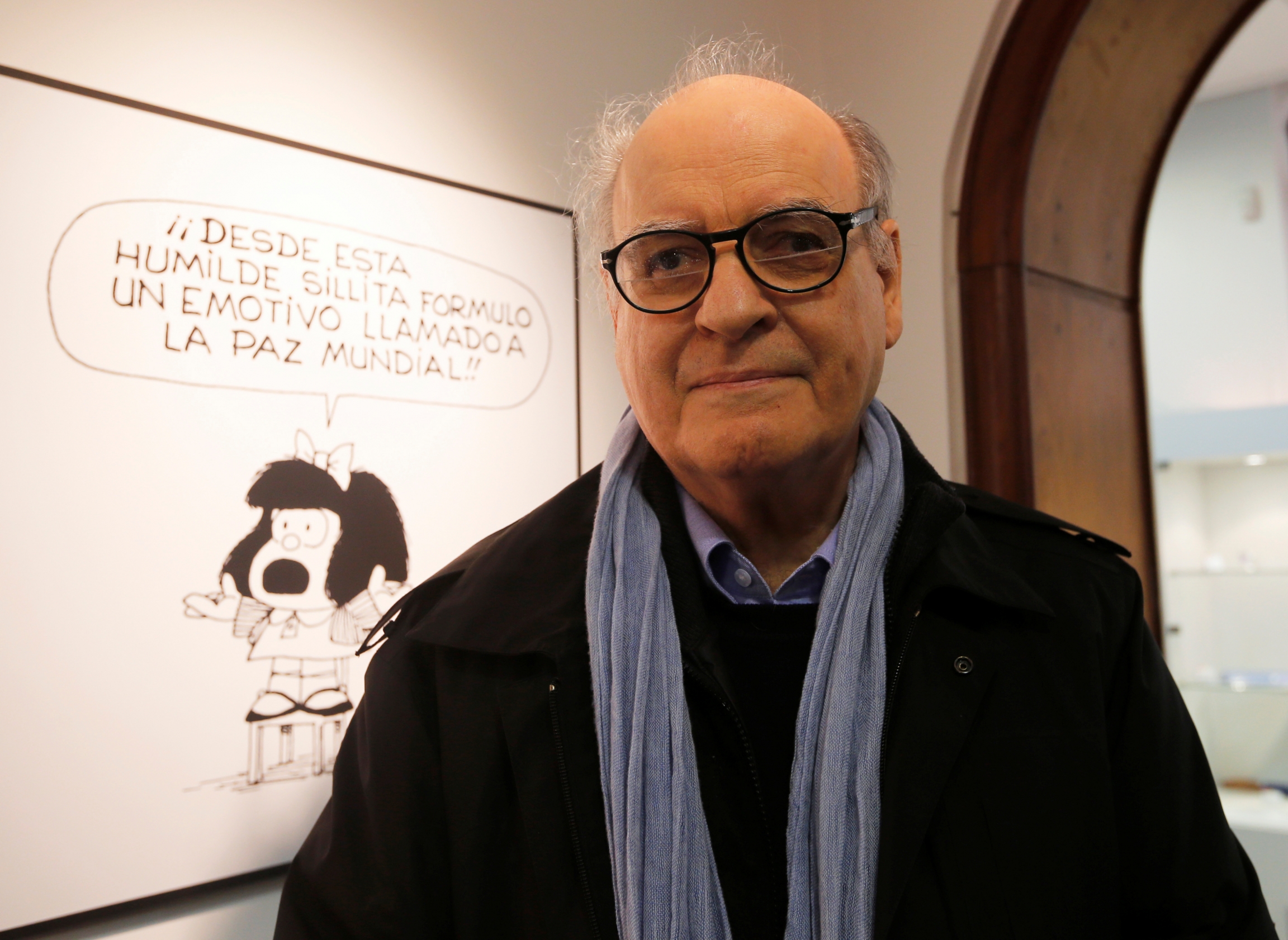 Argentine cartoonist Joaquín Salvador Lavado, also known by his pen name Quino, poses in front of an image of his most famous comic character Mafalda during the opening ceremony of the exhibition of his works at the Museo del Humor in Buenos Aires, June 14, 2014.

In Barcelona, nearly every bookstore has sold out of the “Mafalda” comic strips this past week. At La Central, employee Sílvia Aymí says people have been asking for a copy of the collection every day since the news of Quino’s death.

“People become nostalgic and want to mourn him by rereading the comics. They’re coming up to me to tell me who their favorite character was, just wanting to chat about what Quino meant to them.”

“People become nostalgic and want to mourn him by rereading the comics,” she said. “They’re coming up to me to tell me who their favorite character was, just wanting to chat about what Quino meant to them.”

In the 15 years that Aymí has worked at the bookstore, Mafalda has been a household name — so much so that, she says, many Spaniards think Quino is Spanish.

“It just goes to show you how his legacy has reached many places,” Aymí said.

Even though Quino stopped drawing new “Mafalda” cartoons in 1973, the series continues to be loved by newer generations who were introduced to the comic strip through various anthologies published over the decades in more than 20 languages. It’s often compared to Charles M. Schulz’s “Peanuts.”

Quino’s comic strips are steeped in political and social commentary — but told subtly, from the perspective of a little girl.

Related: Latin American women are disappearing and dying under lockdown

“Having a character that asks questions and challenges everything and laughs at the adult world and doesn’t comply with orders, I think is very powerful,” said Vanesa Miseres, professor of Latin American literature at Notre Dame University.

She says “Mafalda” was important because of the political context in which it was published when many Latin American countries were facing right-wing military dictatorships.

“The comic strip is like a window into the various chapters of Latin American culture, looked at from a global perspective,” Miseres said.

Miseres grew up reading “Mafalda” in her home country of Argentina in the 1980s and ’90s and is now reintroducing the comic strip to her 9-year-old daughter, who was born in the US. She says the comic strip is just as relevant as ever.

“Mafalda’s questioning of the status quo could be extremely valuable to a contemporary reader in the US, including her reflections on democracy and human rights. A lot of her reflections have to do with the family dynamic and the role of women in society.”

“Mafalda’s questioning of the status quo could be extremely valuable to a contemporary reader in the US, including her reflections on democracy and human rights,” Miseres said. “A lot of her reflections have to do with the family dynamic and the role of women in society.”

In fact, one of the revolutionary things about Mafalda was that she was a girl — and an unrestrained, outspoken one at that — in a comic world full of male lead characters.

Related: National Museum of the American Latino gets closer to becoming a reality

Mafalda often asks her stay-at-home mother why she abandoned her studies to be a mother — or whether it was even a choice. In another comic strip, Mafalda starts asking her mother what she thinks of the women’s liberation movement but stops short when she sees the hard work she does around the house. In yet another strip, Mafalda and her male friends pretend to form a government — and she’s elected president.

Brandoni Allende is from Argentina but now lives in Madrid and is herself a writer. Her grandparents were friends with Quino and his wife, Alicia Colombo, since the late ’80s, so Brandoni Allende grew up seeing the cartoonist often at get-togethers.

“He would be so interested and so patiently listening to what you had to say,” she said. “He was like a child. You know how children often listen to what you have to say in such a moving way? That was him. So, I was always so happy to see him.”

Brandoni Allende remembers Quino as a sweet, humble and shy person who engaged her in conversation even as a little girl, when all she had to talk about was her day at school. But despite her love for Quino, Brandoni Allende didn’t like Mafalda.

Related: Options dwindle for Venezuelan migrants across Latin America during the pandemic

As she got older, Brandoni Allende eventually lost touch with Quino, though her grandfather continued to see him until the later years of his life. But she says the influence Quino had on her — and on so many other fans across generations — is almost too big to grasp.

“If the topic comes up, and I say, ‘Oh yeah, he’s my godfather,’ well, that’s an anecdote,” Brandoni Allende said. “I mean, he’s everyone’s godfather.”