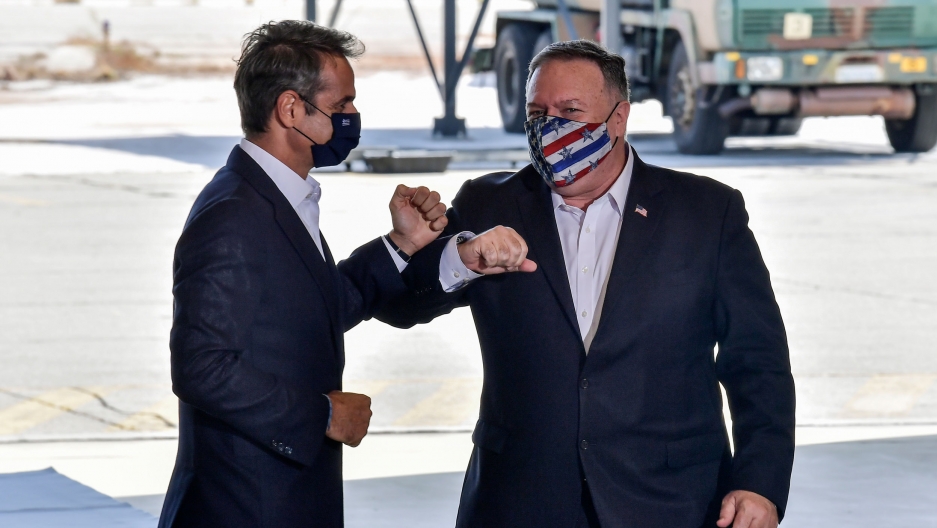 US Secretary of State Mike Pompeo, right, and Greek Prime Minister Kyriakos Mitsotakis pose during their visit at the Naval Support Activity base at Souda, on the Greek island of Crete, Sept. 29, 2020.

US Secretary of State Mike Pompeo, visiting the Souda Bay military base on the Greek island of Crete on Tuesday, expressed support for talks between Greece and Turkey, NATO allies whose relations deteriorated to the point where both had warships facing off in the Mediterranean Sea.

Pompeo said relations between the United States and Greece are "at an all time high and getting stronger."

"Today, I'm in Crete to showcase one of America's strongest military relationships throughout all of Europe," said Pompeo, who was on the second day of a five-day regional tour. "We, the Americans, look to Greece as a true pillar for stability and prosperity in the eastern Mediterranean, and we're incredibly proud to support its leadership."

Greece has been looking to the US and the European Union for support in its territorial dispute with neighboring Turkey, which it accuses of encroaching on its sovereign rights in the eastern Mediterranean. EU leaders are set to discuss this week potentially imposing sanctions on Turkey, which is not a member of the bloc.

Turkey last month sent a research vessel, accompanied by warships, to prospect for energy resources in an area Greece claims is on its own continental shelf and where it claims exclusive economic rights. Athens sent warships of its own to the area and put its armed forces on alert. The dispute led to fears of open conflict.

The tensions at sea eased somewhat recently, with Athens and Ankara announcing they would hold exploratory talks on relaunching stalled negotiations. Technical discussions on a military level also took place at NATO to prevent a military accident, such as the August collision of warships from the two sides. The collision reportedly caused minor damage to a Turkish frigate but no injuries.

Pompeo said he spoke with NATO Secretary General Jens Stoltenberg two days ago "on the progress being made at NATO. And we hope that these talks can continue in a serious way."

Amid the tension with Turkey, Greece has announced major arms purchases, including fighter jets from France, as well as warships, helicopters and weapons systems.

"In the Mediterranean, there should be no waves caused by threats and rivalry. It is a sea of strategic importance, also for the United States," Greek Prime Minister Kyriakos Mitsotakis said after talks with Pompeo.

"It is also a key region for global stability. I was pleased to see that Mr. Pompeo shares our positions, understanding that tension between two members of NATO ultimately is not in anyone's interest," he added.

After a period of taking a step back in regional issues, the United States began to become more involved in the Mediterranean in 2018, Michael Tanchum, a senior fellow at the Austrian Institute for European and Security Policy, said.

"The US was proceeding cautiously, balancing interests in various areas of the region ranging from Syria, Cyprus to Libya, among others," Tanchum said. "Events in the eastern Mediterranean are forcing Washington to accelerate the pace at which it deepens its involvement."

Pompeo visited Athens last October and signed a revised defense cooperation agreement with Greece that provided for increasing joint US-Greece and NATO activity at three locations in Greece, as well as infrastructure and other improvements at Souda Bay.

Pompeo and Mitsotakis announced Tuesday that the Expeditionary Sea Base USS Hershel "Woody" Williams, the second of a new class of sea-basing ships, will be based out of Souda Bay.

"It's literally the perfect choice in light of the facility's strategic location. And it's symbolic of a defense partnership that will continue to expand and to grow," Pompeo said.

Mitsotakis described the 784 foot ship as one of the largest in the US fleet.

Pompeo said security cooperation with Greece "is especially important as Russia continues to destabilize the region, especially in Libya, where the US calls for the withdrawal of all foreign military forces and support for military de-escalation and for Libyan reconciliation."

He said he and Mitsotakis "also agreed to explore closer cooperation to overcome challenges that Russia poses." He referred to "malign influence activities" such as spreading disinformation on the coronavirus pandemic and trying to involve the Orthodox Church.

Pompeo's five-day tour also will include visits to Italy, the Vatican and Croatia.

By Elena Becatoros and Derek Gatopoulos/AP