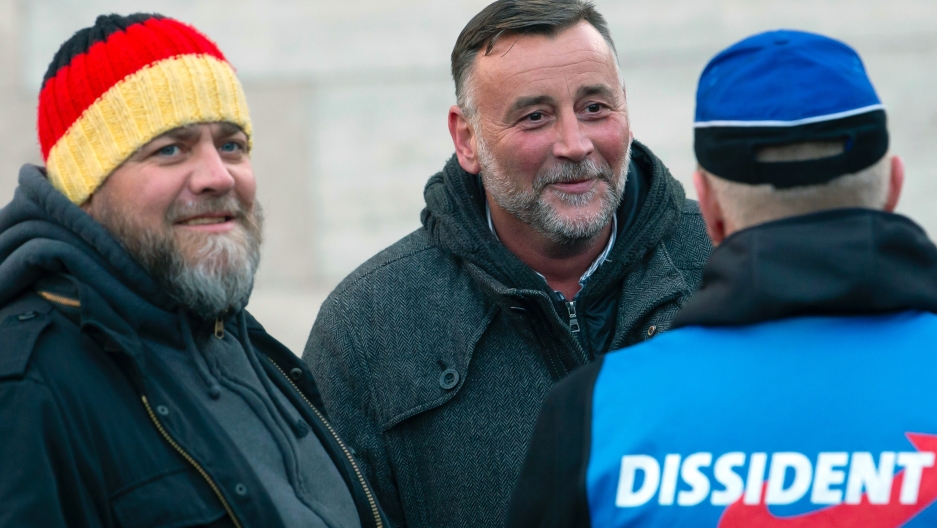 Lutz Bachmann, founder of Pegida (Patriotic Europeans against the Islamization of the West), center, and his deputy Siegfried Daebritz, left, attend a so-called "A light for democracy" silent demonstration, initiated by the far-right Alternative for Germany (AfD) party in Erfurt, central Germany, March 3, 2020.

When hundreds of far-right activists gathered in Berlin earlier this month, banners and T-shirts bearing US President Donald Trump’s face could be clearly seen among the crowd. Many waved the American flag. The demonstrators, who later tried to storm the German parliament, had assembled to protest against the German government’s COVID-19 restrictions.

Related: Is there a ‘Nazi emergency’ in the German city of Dresden?

The US president is a popular figure among far-right groups in Europe. 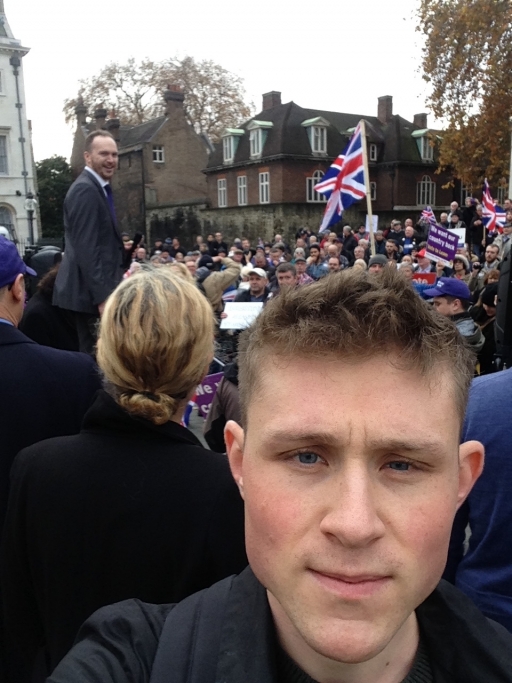 Patrik Hermansson went undercover with far-right groups in the US for one year.

Patrik Hermansson, a researcher with Hope Not Hate, a British advocacy group that campaigns against racism and fascism, says far-right activists see Trump as an anti-establishment figure, someone who rallies against the elites. Swedish-born Hermansson spent a year undercover in 2017 as a member of alt-right movements in Europe and the US.

Trump’s time in office “put the wind in the sails of far-right groups and populist parties in Europe,” he said.

Just hours after TV networks announced that Trump had won the 2016 US election, French far-right leader Marine Le Pen took to the stage of her party headquarters in Paris and celebrated the result.

“Americans have voted, they’ve rejected the status quo. What happened last night was not the end of the world, it was the end of a world,” Le Pen said.

She wasn’t alone in her jubilation. In neighboring Germany, the then-leader of the far-right Alternative for Deutschland (AfD) party, Frauke Petry, tweeted "this night changes the USA, Europe and the world!"

And in Britain, Nigel Farage, former leader of the populist UK Independence Party, compared Trump’s win to the passing of Brexit a few months earlier, saying 2016 was a year of “political revolutions.”

Supporting an American president is highly unusual for far-right politicians in Europe. 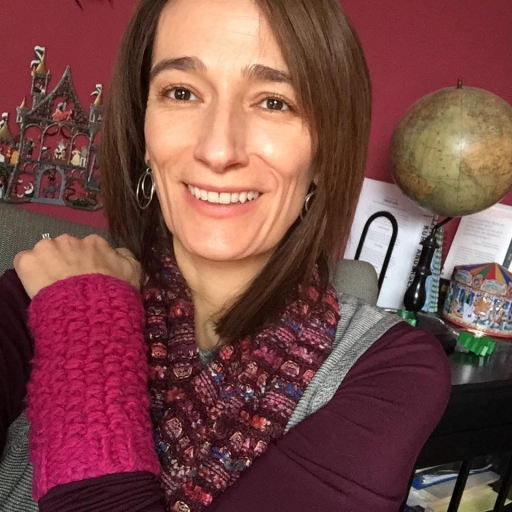 A portrait of Sylvia Taschka

Sylvia Taschka, who teaches history at Wayne State University in Detroit, says US presidents usually represent everything European far-right parties oppose: “Unrestrained capitalism. In other words, you know, a globalized free-market economy and an interventionist, some would say imperialist foreign policy," she said.

Trump challenged both of those stereotypes, Taschka says, and upended their long-held tradition of anti-Americanism. Taschka, who was born in Nuremberg, Germany, has witnessed the rise of the far-right in Germany with dismay. As a young child growing up in a city famed for its enormous Nazi party rallies in the 1920s and '30s and later the Nazi war trials, she was well aware that support for far-right views still existed. But those views were never openly celebrated.

"I was not blind when I lived in Germany.  Germany always had a far-right element — even when I grew up — but they were kept more under the lid.”

In the last decade, Taschka says that has changed dramatically. But she doesn’t attribute the growing strength of the far-right AfD party to Trump. A changing political landscape and the refugee crisis in 2015 were key driving factors, she says.

Dutch political scientist Cas Mudde agrees. Mudde, who’s a professor in the School of Public and International Affairs at the University of Georgia, says far-right parties like the National Front in France or the Freedom Party of Austria don’t need to look to Trump for ideological motivation.

“They have a much more developed ideological frame than Trump will ever have,” he said.

Mudde says President Trump takes little notice of Europe’s populist politicians — but that’s not the case for some of his diplomats. The US ambassadors to Germany and the Netherlands have both been guilty of normalizing Europe’s far-right parties, he says.

“One can think of Richard Grenell, in Germany, who was criticized for normalizing the AFD and in the Netherlands, it's even stronger with US Ambassador Pete Hoekstra," Mudde said.

It’s alleged that far-right Dutch party leaders met with Hoekstra at the US Embassy to discuss their plans for the future, Mudde says.

Former Trump strategist Steve Bannon has also been holding court with far-right parties in Europe over the last couple of years. Bannon plans to convert a monastery outside of Rome into a political academy for ultraconservatives and future populist leaders, a move that has met fierce resistance from Italy’s Culture Ministry. The former White House aide also helped establish a foundation in Brussels aimed at supporting Europe’s far-right parties. But so far, it has received little attention from the parties themselves.

French political analyst Jean-Yves Camus, a specialist on the French and European radical right, says parties like the National Front in France have little interest in taking advice from an American. They were doing just fine before Bannon came on the scene, he says.

“When Steve Bannon tried to present himself as the man who could unite the extreme right in Europe, he forgot a very important thing: The National Front was a very strong party well before Steve Bannon became known in Washington, DC. So, basically, they did not need him.”

The policy of "America first" that Trump promotes has been a mantra of the far-right movement in France since the 1970s. Slogans like “France for the French” or “French first” have been around for some decades, Camus says.

While the rise of populist parties in Europe might seem like an anti-establishment vote, Hermansson says it’s important to recognize that many grassroots supporters believe violence is the only way to achieve their goals. In his first few months undercover with far-right groups, Hermansson was shocked at how openly they condoned the use of violence.

“I think in the beginning, I was quite surprised over how openly supportive of violence they were, or at least how implicitly they gave credence to even mass shootings," Hermansson said.

Hermansson was in Charlottesville the day of the Unite the Right white supremacist rally in August 2017. He was standing just yards away from Heather Heyer when she was killed by James Alex Fields Jr., an alt-right supporter who plowed his car into a crowd of counterprotesters, injuring 19 people and killing Heyer. 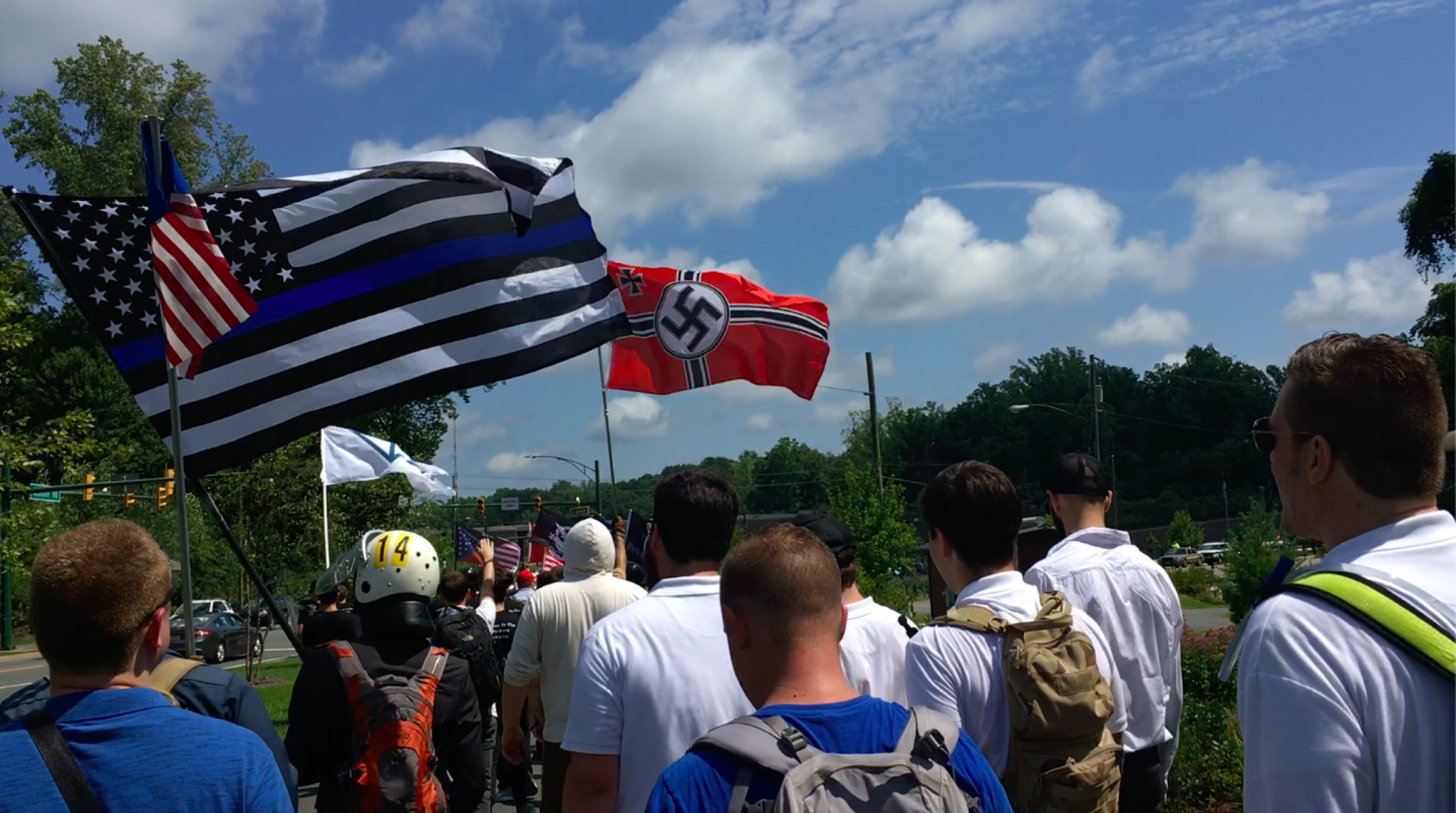 Screenshot of video footage of a white power rally in Chartlottesville, Virginia, taken by Patrik Hermansson, who went undercover with far-right groups in the US for one year.

Hermansson says the incident was hugely traumatic and although he never expected someone would get killed that day, he had become increasingly concerned that things would turn violent. After Hermansson revealed his cover, he received threats from far-right groups for months afterward. Today, he says he feels relatively safe.

The alt-right supporters Hermansson met in Europe would most definitely support a second Trump term, he says. In the last year, populist politicians in Europe have also been tweeting their support for another Trump win in November. Political scientist Mudde says their support hinges on the fact that they share a number of common enemies with the US president. They don’t believe a Trump victory will boost their standing in the polls, he says, but it’s better than seeing Biden get into office.

Biden is no friend of the far-right, Mudde says.