In one of Cambodia’s least populated, most remote provinces, Koh Kong, Chinese construction teams are hard at work. They’re building dozens of high-rise buildings and villas and an airport with the longest runway in the country.

Already over the past decade, they’ve built a hydropower dam and miles of new roads with streetlights and flower beds decorating the median strips. A sprawling resort with a casino and few guests, almost all of them Chinese, sits near the coast, with a partially built concrete pier a short motorboat ride away.

“No one in this village knows anything about the plan,” said a local fisherman, who declined to give his name. “There’s a checkpoint, and only Chinese people are allowed to go inside. They say this is Chinese land.”

It’s actually Chinese-rented land. In 2008, Cambodia’s government granted a 99-year lease to a Chinese company with close ties to China’s top leadership. The concession includes an area of land in Koh Kong that’s more than twice the size of Washington, DC, and includes 20% of Cambodia’s coastline.

The company, Union Development Group (UDG), was formed just before this deal as a joint Cambodian-Chinese company. But the Chinese official shepherding the deal through was Zhang Gaoli, one of the seven most senior leaders in China at the time, and chair of the Chinese government’s leading group on its Belt and Road Initiative. This is one of several examples of Chinese projects being dual-use — in this case, ostensibly built for tourism, but built in a way that suits military needs, as the Center for Advanced Defense Studies in Washington, DC, argues in its report, “Harbored Ambitions: How China’s Port Investments are Strategically Reshaping the Indo-Pacific.” 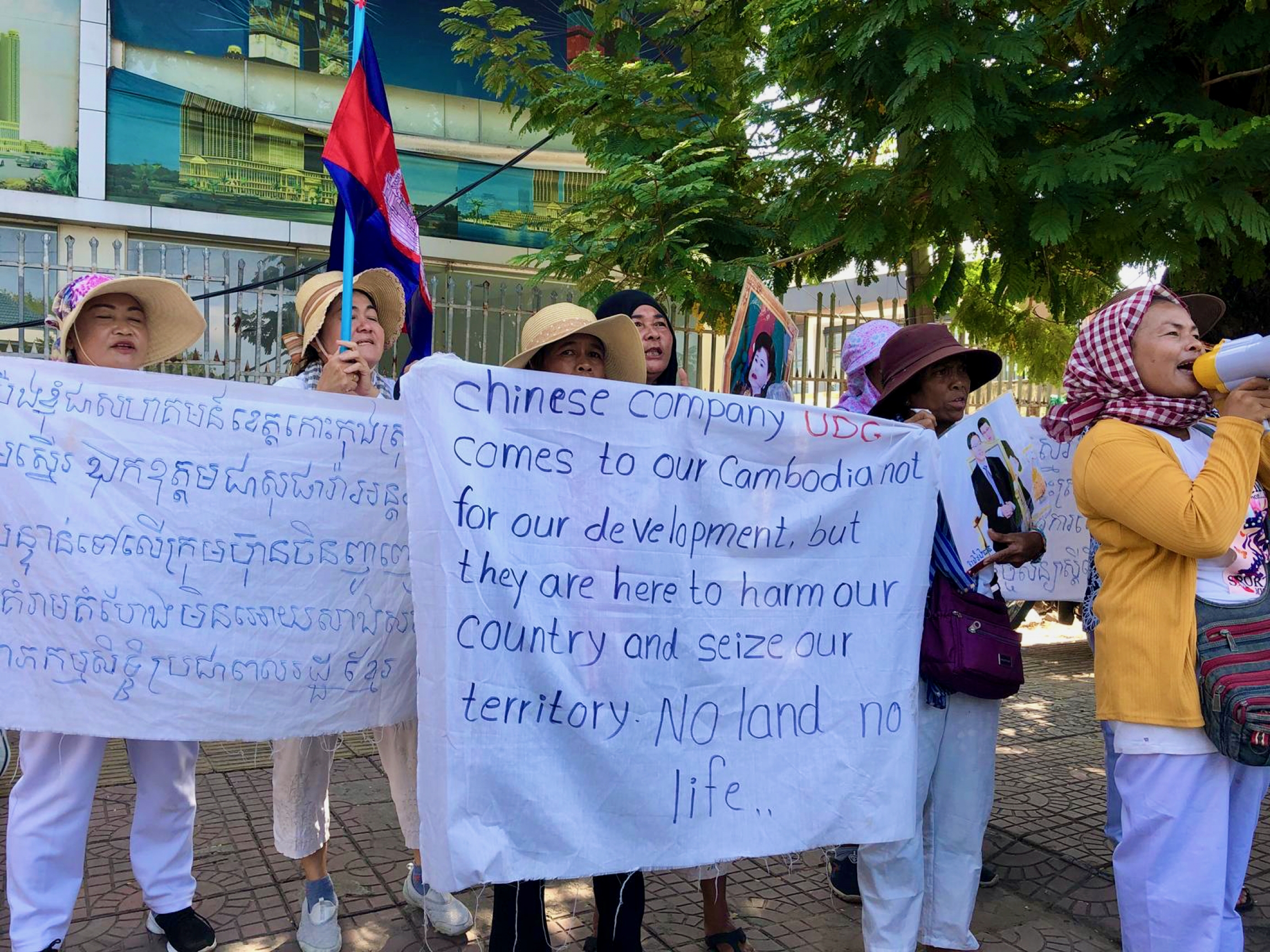 Cambodians protest outside the Chinese embassy in Phnom Penh in August 2019. They were kicked off of land now leased for 99 years to a Chinese state-owned company, Union Development Group.

With that in mind, the US Treasury Department has just slapped sanctions on that Chinese state-owned company. On Sept. 15, it used the Global Magnitsky Act — which is meant to target perpetrators of serious human rights abuse and corruption, along with their supporters. The law freezes “all property and interests in property” in the United States or “in the possession or control of US persons,” owned directly or indirectly by UDG, and by any entities it owns directly or indirectly.

This “malign Chinese investment,” the US Treasury Department statement said, has “forced Cambodians from their land and devastated the environment, hurting the livelihoods of local communities, all under the guise of converting Cambodia into a regional logistics hub and tourist destination.”

“A permanent PRC (People’s Republic of China) presence in Cambodia could threaten regional stability and undermine prospects for the peaceful settlement of disputes, the promotion of maritime safety and security, and the freedom of navigation and overflight.”

Another concern to US interests in Southeast Asia cited in the Treasury Department statement is strategic. It cites “media reports that the Cambodian government, Phay Siphan, said that Dara Sakor could be converted to host military assets.” (Dara Sakor is the name of the resort area.) Siphan, a government spokesman, is quoted in The Bangkok Post on July 20, 2019, as saying: “Dara Sakor is civilian. There is no base at all. It could be converted, yes, but you could convert anything.”

“A permanent PRC (People’s Republic of China) presence in Cambodia could threaten regional stability and undermine prospects for the peaceful settlement of disputes, the promotion of maritime safety and security, and the freedom of navigation and overflight,” the Treasury Department statement said.

The Cambodian government has also agreed to give the Chinese military access to Cambodia’s naval base, Ream, located about 50 miles down the coast from Koh Kong, the Wall Street Journal reported in July 2019. And a memo obtained by ABC Australia detailed planning by China’s defense attache in Cambodia for a visit to Ream in early 2020 by a high-level Chinese military mapping and surveillance team. Three weeks after the dates for that reported visit, a Chinese, military-style drone was found crashed in Koh Kong.

The Chinese concession in Koh Kong is also located just across from a narrow stretch of southern Thailand, the Kra Isthmus where Chinese have been encouraging Thais to let China build a canal that could save container ships and other vessels time and money. This would also allow the Chinese military, if based on Cambodia’s coastline, faster access to the Indian Ocean and what Chinese strategists have long called their “String of Pearls” — a series of ports from China to Europe that Chinese, state-owned entities now manage and, in some cases, own, at least in part.

The Thai government has set up committees to consider the prospect of Thailand building this canal, a possibility first raised by a Thai king 300 years ago, and revisited and dismissed several times since for being too complicated, too expensive or too risky. The idea has been revived again recently by a group of retired Thai generals and others. Some want a Thai-controlled project with investments from multiple countries. Others say Thailand would benefit from this being part of China’s Belt and Road Initiative, perhaps one of the most sweeping, global infrastructure efforts ever. It’s China’s effort to build a belt and land routes and a Maritime Silk Road of sea routes around the world, shifting the center of global trade and power to China.

In Southeast Asia, which China’s leaders have long seen as China’s backyard, many of China’s Belt and Road projects appear to be strategic as well as commercial. That includes developing alternative trade routes to the narrow Malacca Strait, through which China gets much of its oil and gas from the Middle East and Africa.

China’s Belt and Road projects have also created a presence in ports and on coastlines around Southeast Asia, especially on and near the South China Sea — where China has built islands and military bases to defend its contested claim to waters that Vietnam, the Philippines, Brunei, Malaysia and Taiwan also claim, in part, as their own.

Two strategies in particular, written about by Chinese think tanks, appear to be employed in Cambodia. First, build ostensibly for civilian use, in a way the military can use it later. A second related strategy known as “port-park-city” encourages building or expanding a port, a nearby industrial park and a city with room for lots of outsiders to come in.

Related: Italy is caught in the middle of the EU's tussle with its 'systemic rival,' China

Cambodia’s port city of Sihanoukville has seen much of this happen over the past five years. A new industrial park has created thousands of new jobs for Cambodians. But many Cambodians in Sihanoukville complained bitterly as a Chinese building boom took off, and tens of thousands of Chinese residents suddenly moved in. With them came new casinos and Chinese gangs sometimes fighting on the streets.

“We don’t really hear something about that before they come. ‘Oh, a really, really big population of Chinese people will come into our city, and will develop our city,’” said Ngov Chanravy, medical director for M’Lop Tapang, a nonprofit group that helps educate and provide basic services to poor Cambodians in Sihanoukville.

One day in August 2019, monsoon rains had flooded the streets and even some of M’Lop Tapang’s classrooms — the new concrete roads and buildings no longer absorbing the rains like the ground did before.

“And when [the Chinese developments] come, it’s just like the flood we are having. It’s just kind of like, the water is come really, really fast,” she said that day.

Months later, it all slowed down. Casinos and gangs had never been part of China’s official Belt and Road endeavors, and in the face of growing Cambodian anger, Cambodia’s Prime Minister Hun Sen banned online gambling. Tens of thousands of Chinese left Sihanoukville and, the Cambodian government said some 400,000 left Cambodia, at least for a while. The COVID-19 pandemic has sharply reduced Chinese and other tourism.

But the Chinese concession to 20% of Cambodia’s coastline still has 87 years to run, and China’s still investing heavily in Cambodia. Whether China’s Belt and Road investments in Cambodia prove to be the "win-win" China has promised is still an open question.